This V8 mid-sizer from Lexus – almost an RC F coupe in four-door – might not have a turbo, but that’s part of its charm.

WHAT IS IT?
Essentially a roomier, four-door version of the Lexus RC F coupe that won friends and influenced oversteer at Car of the Year 2016. It packages the same raunchy, engaging powertrain and similar chassis upgrades into a refined, beautifully built four-plus-one seater.

WHY ARE WE DRIVING IT?
We were impressed with the Lexus GS F when we drove it in Spain, enjoying its sweet balance of sporting abilities and general athleticism. Now we get to see how its firm, non-switchable suspension tune copes with Aussie roads, and we can make a value call based on local pricing and spec levels. 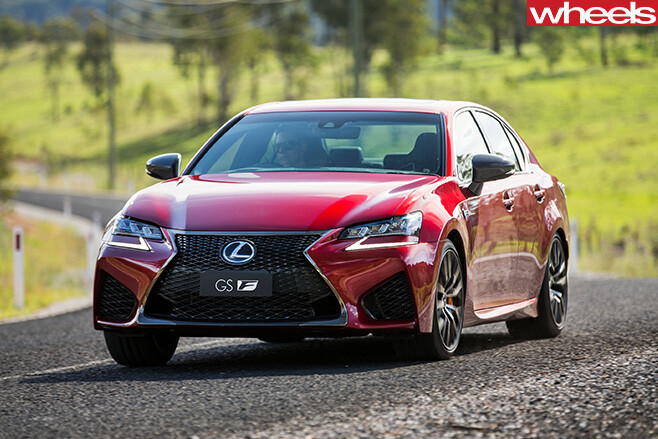 THE WHEELS VERDICT
GS F doesn’t have the fearsome twin-turbo punch of a Mercedes-AMG C63 S (which it slightly undercuts on price), nor the last edge of dynamic resolve of the more focussed Germans. But it’s roomier than an M3 or C63, and counters with a wonderfully linear, energetic V8, silken refinement, extensive equipment, and generous driver feel-good factor.

THE WHEELS REVIEW
WITH throttle wide open, and the 5.0-litre atmo V8 belting out a baritone bellow at the top of fifth gear, two things are front of mind while pushing the Lexus GS F around South Australia’s Mallala Raceway. First, how late can I leave it until hammering the excellent Brembo brakes in preparation for the ultra-tight right-hand hairpin? And second, how can this car, so polished, so accomplished, come from the same company that serves up the underdone, thoroughly unappealing CT200h hybrid? Or, for that matter, the lumbering, LandCruiser in a dinner-jacket that is the Lexus LX570? 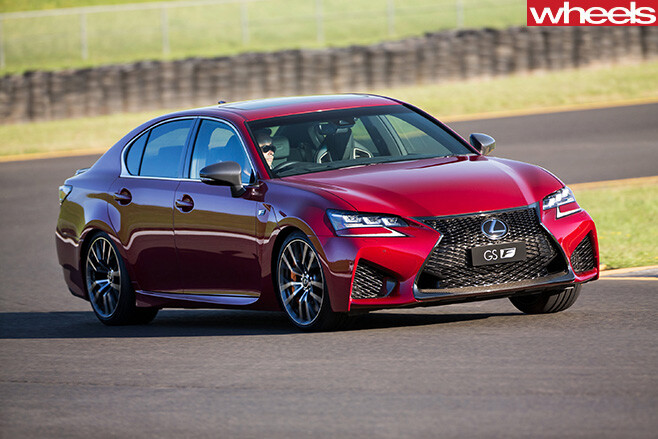 Okay, perhaps this isn’t the ideal time to be musing over the inconsistent, slightly schizophrenic nature of the current Lexus line-up. Or why some customers who have been recent visitors to a Lexus showroom come out needing a few counselling sessions just to try and get it all straight in their heads.

Better to just focus on the positioning of the GS F, and be grateful that it’s as well developed as it is.

Given that the GS range sits, in terms of dimensions and sales aspirations, as a better equipped, keener priced competitor set for Audi’s A6, Merc’s E Class and BMW’s 5 Series, it would stand to reason that the hottest of the GS line would be eyeballing RS7/M5 and E63, but it doesn’t quite work that way, both in terms of performance and price. Instead, the 351kW GS F, especially in light of its circa-$150k tag, is more of an Audi S6 alternative, or a slightly roomier (and 300kg heavier…) option to M3/C63 and RS4. 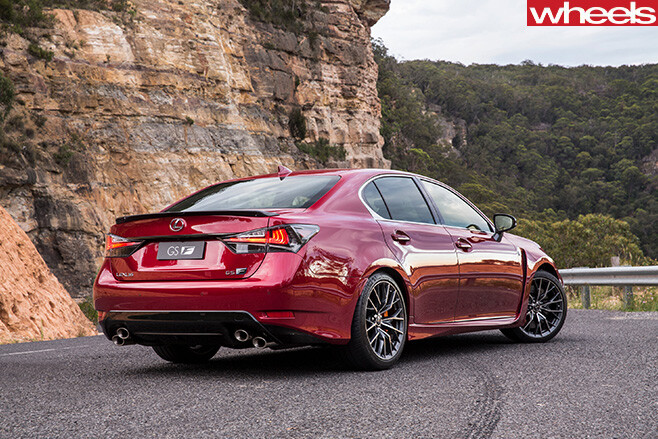 So yes, it’s on the heavier side, and no turbos means it needs to revs to get its shove on. But, at the risk of a spoiler alert, that’s not the gross handicap the numbers may suggest. The GS F’s torque-to-weight ratio may make it look underdone against its rivals, but the brilliant throttle response and lush, layered soundtrack of its atmo 5.0-litre goes a long way towards compensating for a relative lack of low-end shove.

To hear the engine working up around its 7300rpm peak, to feel the top end responding perfectly to tiny adjustments of your right foot, is to be reminded why we love atmo V8s. As for any perceived lack of boosted midrange? If you need to get the hell outta Dodge, just kick it to the firewall and let the eight-speed auto quickly shuffle to the lowest gear available. At no stage did I say to myself: “if only there were a couple of turbos to dull the throttle response and sully the engine note while clipping a few tenths off that 70-140km/h time.”

The aluminium V8 runs both direct and port injection, and thanks to the cleverness of its variable cam timing system, is capable of switching to the more frugal Atkinson cycle on a light throttle. Inside it runs forged rods, titanium valves, and a high 12.3:1 squeeze ratio. While peak power of 351kW is delivered at 7100rpm, there’s headroom to 7300rpm. Maximum torque of 530Nm sits across a high-ish plateau between 4800-5600rpm, so no surprises that’s the base operating zone you’ll need to be in the moment you clear the city limits. 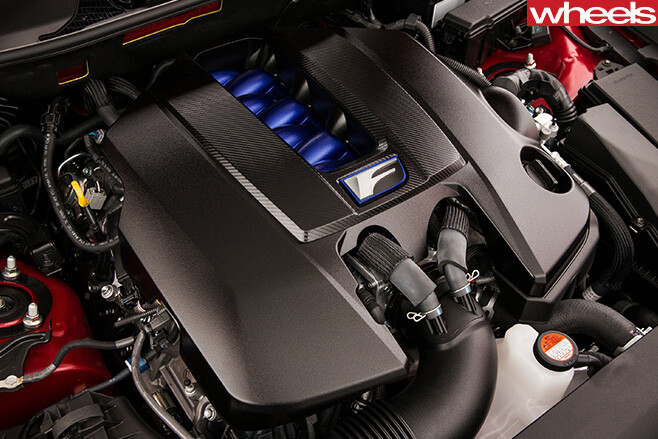 Of the four driver selectable modes, Normal does a superb job of up shifting on a light throttle and slurring languidly around town. Sport ramps up throttle response and keenness of the transmission, holding gears intuitively but not obstinately. Switch to Sport +, and the prominent central TFT tacho display strips out the 100rpm graduations, and drops engine and oil temps into the centre. The powertrain ramps into ultra-aggro mode, clinging to gears all the way to redline and downshifting almost savagely with a flamboyant rev blip the moment you jump from throttle to brake.

Pushing the lever over to the manual gate means the box will hold gears right onto the limiter at 7300rpm as you pluck away at the paddles. But you’ll really only take this approach for extra involvement or (maybe) track driving, given that Sport+ is so well mapped to avoid early upshifts. Bottom line; this is a gun powertrain. It may appear a bit soft on paper – no dual-clutch transmission, no turbochargers – but the real-world experience says that’s no real loss in a car like this.

The steering assistance level is not independently driver selectable, but Lexus does claim the EPS aid is reduced in Sport+. It’s subtle; and I found myself craving a slightly meatier, more direct connection. It’s not especially quick at over 2.8 turns lock to lock, a fraction vacant at the straight-ahead, and not overly communicative once you’re tipped into a corner and sniffing the limits of the (ample) grip levels. The rest of the chassis pounds its chest as a proper sports sedan; the steering feels a little aloof by comparison. 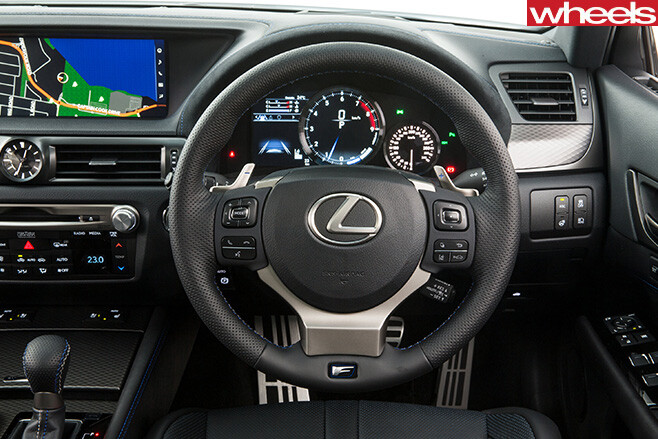 Better is the ride, which treads a well-judged line that sits between firm and overly stiff. It’s composed and not jarring or intrusive around town – appreciably more compliant than, say an AMG C63 even in its Comfort setting – yet does that trick of firming up with a beautiful resolve when you start pounding through dips and undulations. And pound you will, because unlike the twin-turbo opposition, with their tsunamis of midrange shove, culminating in top-end wallops that are only useable for milliseconds even on quiet backroads, the GS F allows you to properly unleash everything it has out of every corner. Yes, you’d get dropped pretty swiftly by a well-pedalled C63 S, but in terms of involvement and the satisfaction of max-extraction, the Lexus rates highly.

Body control is excellent, and, if you’re really up it, or on a circuit, you can feel the effects on the rear end of the Nurburgring-developed torque-vectoring differential (TVD). It uses electric actuator motors and multi-plate clutches to vary the torque distribution by up to 18 percent side-to-side according to which of the three settings you’ve chosen, and info fed from the vehicle dynamics management system. Pile into a corner a bit hot, and just when initial understeer really builds, another throttle application brings the back end into a sweet pivot position, with an almost rear-steer effect. It helps deliver a level of agility and overall poise you may not expect from an 1865kg car with an L on the grille. 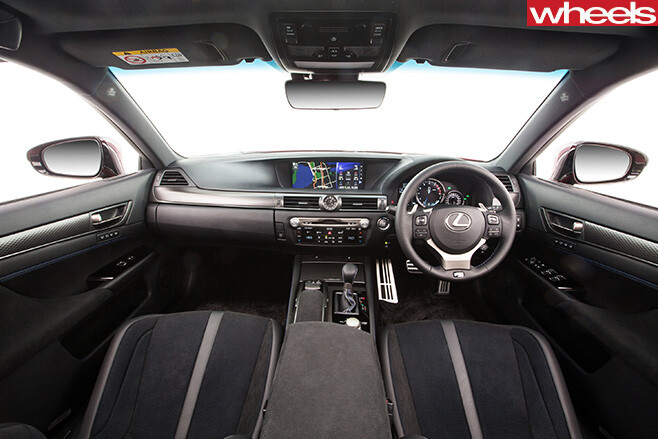 The cabin is more predictable, exuding that beautifully crafted feel Lexus does so well, with lovely tactility dripping off everything from the shift paddles to the aluminium knobs controlling the thunderously lush-sounding Mark Levinson audio system. Other standard inclusions are sunroof, heated front and rear seats, heated wheel, 12.3-inch TFT display, driver-configurable instruments, an excellent head-up display, and LED headlights. The only real decision buyers need to make lies with interior trim: the Alcantara-finished model is priced at $148,800, while an extra $3000 brings semi-Aniline leather with perforations that allow front seat-seat ventilation. Either spec is available with aluminium trim, or glossy carbonfibre. The seats locate you superbly in a natural, super-adjustable driving position, the wheel adjusts electrically, and everything feels purposeful and well considered.

Only some tyre noise from the 19-inch Michelins breaks the cabin’s otherwise hushed ambience. Well, that and the engine note once you switch out of Eco or Normal modes – which Lexus is quick to point out is not a synthesised effort. Instead, unwanted frequencies are banished using noise-cancelling tech, and only the good stuff gets fed through the speakers. It’s quite natural-sounding, and can be switched off if you’re in the mood for a more stealthy approach.

Which kind of sums up the GS F’s overall character. It’s a car of well-judged duality, capable of playing mild-mannered comfort conveyance through the week, and becoming half an angry animal when let off the leash on weekends. Exactly the kind of car that’s worthy of the F badge.