There are two types of BMW M cars, those that simply wear the badge, and those that define it, and the new X4 M40i is definitely one of the former.

WHAT IS IT?
The ultimate version of the slightly strange-looking Sports Activity Coupe that is the X4.

WHY WE'RE TESTING IT
Because it’s a game changer for BMW’s M division, and looks like it could be close to the most purist-fibrillating car that the maniacs from Munich offer. 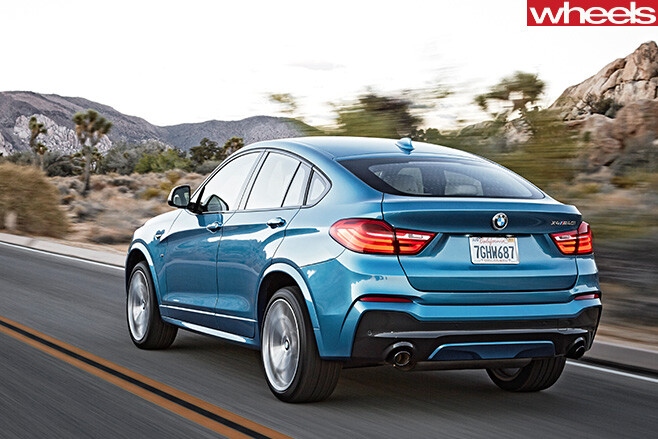 THE WHEELS VERDICT
The X4 M40i might seem like the answer to a question no one asked, but the M Division has identified BMW’s X cars as “an area of strategic expansion”. Fleecing poseurs who have to have the best of the best, no matter how pointless, is a solid business model, yet, despite being fast in a straight line, in driving terms not a lot of the M magic rubs off on this car. But that’s possibly not the point.

THE WHEELS REPORT
According to the Germanically cheery folk who work at BMW’s skunken werken, “M is the most powerful letter in the world”.

M stands for Motorsport, of course, not Megalomaniacal or Mein Kampf, but you have to wonder if the potency of that particular consonant is lessened each time it gets applied to an M Performance model, rather than a proper M car such as the new BMW M2. 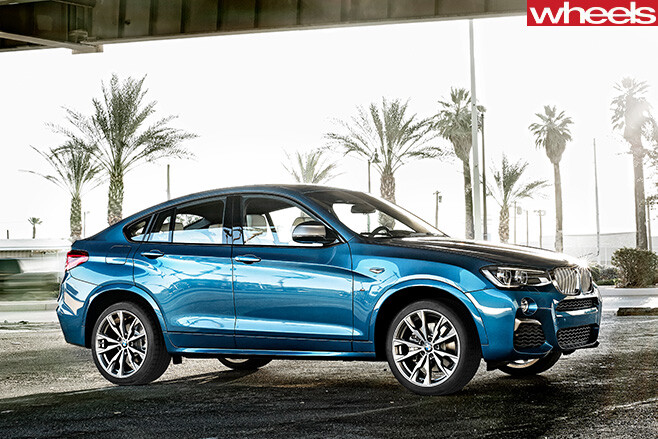 That car, which is highly worthy, was launched cheek by jowl, strangely, with the latest pseudo M product, the X4 M40i, which is, apparently, the first petrol-engined Sports Activity Coupe to huddle under the crowded M umbrella.

These branding exercises are clearly worth whatever sheen they might wipe away from the M for Mystique, because while some 35,000 people bought a proper M car last year, almost 28,000 more went for a Performance model.

Unsurprisingly, we didn’t take the X4 around the exciting Laguna Seca circuit because no car that stands as tall and rides as high as this should have anything to do with motorsport.

The ride quality on the 20-inch, double-spoke M alloys is pleasant enough, in Comfort mode, and the car sways its way through with minimal roll, although rear passengers tend to complain a bit (they’re already in a bad mood because of the restricted headroom in the back, which is the negative payoff for the fast-roofed, coupe-like styling). Shorter, sharper turns tend to tip up the apple cart, sadly, although switching to the sport modes does provide more sure-footedness and less wobbling. This is all no doubt due to the M work on the suspension, which included longitudinal refinements, stronger anti-roll bars, retuned adaptive dampers and increased camber at the front.

The steering also weights up nicely in sport mode, providing a more genuinely M feel, while the car’s xDrive all-wheel-drive system has been tweaked to make it more rear-biased, and thus more properly sporty feeling.

Overall, though, if you want to tackle anything more challenging than medium, easy-does-it bends, you either have to take it slow or wrestle with understeer.

The noises from the M Sports Exhaust system, complete with chrome black tailpipes, do enough to convince your ears that you’re in something serious, while a 0-100km/h time of 4.9 seconds is also nothing to be sniffed at. The M Performance Twin Turbo six-cylinder 3.0-litre engine has been at least heavily breathed upon by the company’s gurus and makes 265kW and 465Nm, which is a solid 40kW and 65Nm more than you can have in the xDrive35i version of the X4 (it’s also more than half a second faster to 100km/h than that next best option).

Of course, the big point there is that here in Australia you can have an xDrive35i version for just under $90,000, but even with the best will and the fattest wallet in the world you can’t buy the M version, yet, because so far it’s only being made in left-hand drive, because it’s a car whose very existence is heavily driven by Americans.

When BMW gets around to making the X4 M40i for the world’s minority road users, however, BMW Australia says it will have a good, hard look at the business case, and that shiny M badge in particular.