WHAT IS IT?
The second generation of Audi’s range-topping RS-badged A3 Sportback, but the first destined for Australia. An unspecified ADR issue prevented sale of the old model, but its lighter, sharper and faster replacement should make amends. Contrary to usual practice, the RS version arrives early in the current A3’s lifecycle – just two and a half years after launch, compared to seven years for the previous Audi RS3 Sportback – in order to bolster Audi’s push for global sales dominance in the premium sector.

WHY WE’RE TESTING IT
Audi wants its high-performance RS line-up to be strong enough to eclipse BMW’s M division and Mercedes-Benz’s AMG portfolio. And it needs a full line-up of models to do so, hence why the scalding RS3 Sportback is being launched just 18 months after its hot S3 Sportback sibling.

MAIN RIVALS
Eyeball to eyeball, the Mercedes-AMG A45 hatch and, somewhat indirectly, the BMW M235i coupe. The forthcoming, updated BMW M135i hatchback will also be on the RS3’s radar, but then so should the new-gen Ford Focus RS. Only a fool would ignore the scorching Ford’s supreme reputation as a driver’s-car.

THE WHEELS VERDICT
A stunning piece of work in terms of visual presence and interior presentation, backed by a charismatic turbo five with class-leading thrust. But an ill-conceived drive program merely highlighted the mediocrity of the RS3’s ride on sub-standard surfaces and the understeer bias of its chassis on a tight racetrack. Given optional magnetic dampers and a truly great piece of road, the RS3’s dynamic talent may shine brightly, but we won’t know until it launches locally in October.

PLUS: Suave, yet scorching performance; superb visuals and quality; aural character; reassuring on-road grip
MINUS: Too much understeer on a track; stiff ride without magnetic dampers; jury still out on its degree of driver appeal

THE WHEELS REVIEW
BEAUTIFUL people will always get away with more than the rest of us. Sparkling eyes, a great smile, an athlete’s fitness and a model’s dress sense are an unbeatable combination, especially when you add charisma to the mix. And so it proves for the Audi RS3 Sportback.

Derived from the rather bland and slightly frumpy A3 Sportback, the RS3 has truly grown into its skin, fleshed out by meatier wheel tracks, menacing air intakes and guard-filling 19-inch wheels, not to mention Audi RS’s signature oval-shaped dual exhausts.

Acoustic flaps open, cackling a deliciously amplified, hard-edged five-cylinder rasp, the RS3 sounds every inch the mega-hatch Audi wants it to be.

Under its bonnet sits a 2.5-litre turbocharged direct-injection five, straight from the old TT RS, and destined for the next one as well.

Hand-built in Audi’s engine plant in Gyor, Hungary, it has received a number of upgrades for its latest application, including less internal friction via new piston rings, a new air inlet and optimised air paths.

Audi claims between 50 and 100 percent of drive can be transferred to the RS3’s rear axle, which sounds promising for its handling balance. The quattro system’s electronically controlled, hydraulically actuated clutch pack is mounted on the rear axle to improve weight distribution, though at 59/41 front-to-rear, the 1520kg RS3 is clearly front-biased.

What the drive-split figures don’t convey is the fact that the front wheels need to be slipping before all the drive heads rearwards, and on a beautifully surfaced racetrack like Vallelunga, just outside Rome, the RS3’s ability to drift ain’t gonna happen without deliberate and expertly timed provocation.

What Vallelunga does demonstrate is the RS3’s undoubted speed, and the unyielding effectiveness of its optional ceramic brakes (expected to add $10K in Australia), which share the normal front discs’ 370mm diameter and eight-piston calipers, but lower mass from 11.9kg to 5.5kg per corner.

Driven hard around Vallelunga, even the optional 255/30R19 front tyres – is this the first modern car to wear wider fronts than rears? – are unable to dial out the RS3’s inherent understeer. Slow-in, fast-out is the name of the game as the RS3 sends drive to its 235/35R19 rear boots for terrific corner-exit thrust, but as you add speed mid-corner, it’s obvious the RS3 is dominated by its front end.

Out on the busy, narrow, poorly surfaced and low speed-limited roads that encircle Vallelunga, the RS3 demonstrates moments of brilliance. Sweet seven-tenths handling poise, the odd satisfying slide in its tail and precise, if slightly aloof, steering make for a fast, confidence-boosting hot hatch. But not necessarily an inspiring one.

None of the launch cars featured the optional magnetic dampers, which meant the standard-spec RS3s we drove in Italy were less than supple over the many potholed and broken surfaces we encountered.

Without adaptive dampers, Audi’s Drive Select system only alters the engine/gearbox, steering and engine sound. With the Individual mode set to Auto for the drivetrain, Dynamic for the steering and Dynamic for the exhaust, the RS3 is in its element, though you also need to select Sport mode in the transmission to get the exhaust’s full symphonic effect. A sports exhaust is optional in Europe, but Audi Oz is yet to decide whether to make it standard here.

What cannot be disputed is the greatness of the RS3’s interior.

With just 2.1 turns lock-to-lock and well-judged weighting in Dynamic mode, the RS3’s leather and Alcantara steering wheel is delightful, as are its red-edged seatbelts, diamond-stitched leather seats and the superb feeling of quality.

Optional fixed buckets are 7kg lighter per seat, but you’d want to be serious about your driving, and personal weight management, to go there.

So, despite being the fastest and most powerful Audi five-pot of all time, there’s something suave and gentlemanly about the RS3 Sportback. Unlike the A45, it’s quiet and well-mannered when you want it to be, and is clearly dressed for the occasion with the utmost taste.

Unfortunately, the unflattering drive loop chosen by Audi to showcase its fastest-ever hatchback has failed to properly enlighten us on the potential greatness of its quattro drive system and the comfort benefit of its optional magnetic damping.

For the sake of its fabulous engine and salivatory styling, here’s hoping a strafe up a mountain pass when it arrives in Australia in October will grant it a great big tick. 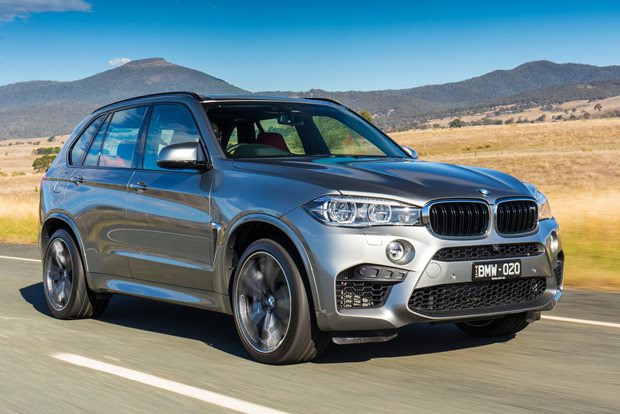 BMW’s bahn-storming X5M returns for another stab at the super-est SUV title, bringing boosts in power, efficiency and features, for a faster yet more frugal proposition. But... 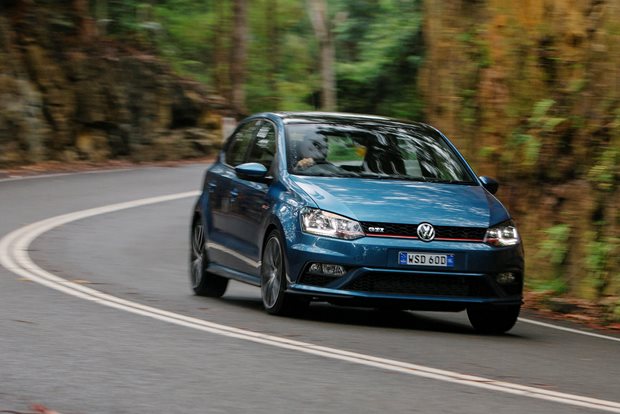 Remember the manual gearbox? One drive of the new Polo GTI and you won't forget the joy of this manual hot-hatch as Volkswagen goes back to the future with its new baby 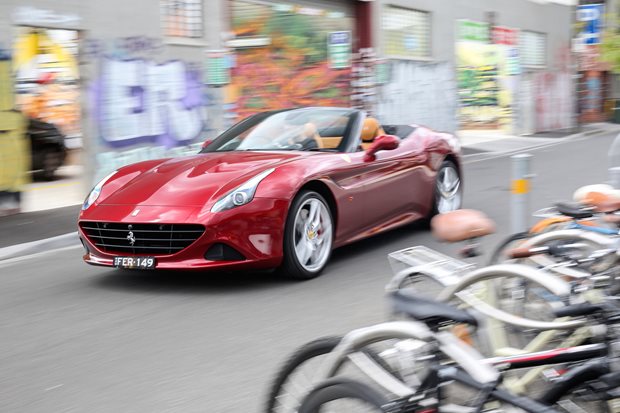 The $409,000 Ferrari California T is at the vanguard of a brave new world for the scuderia. With a turbocharged 3.9-litre V8 under the bonnet, it sets the template for... 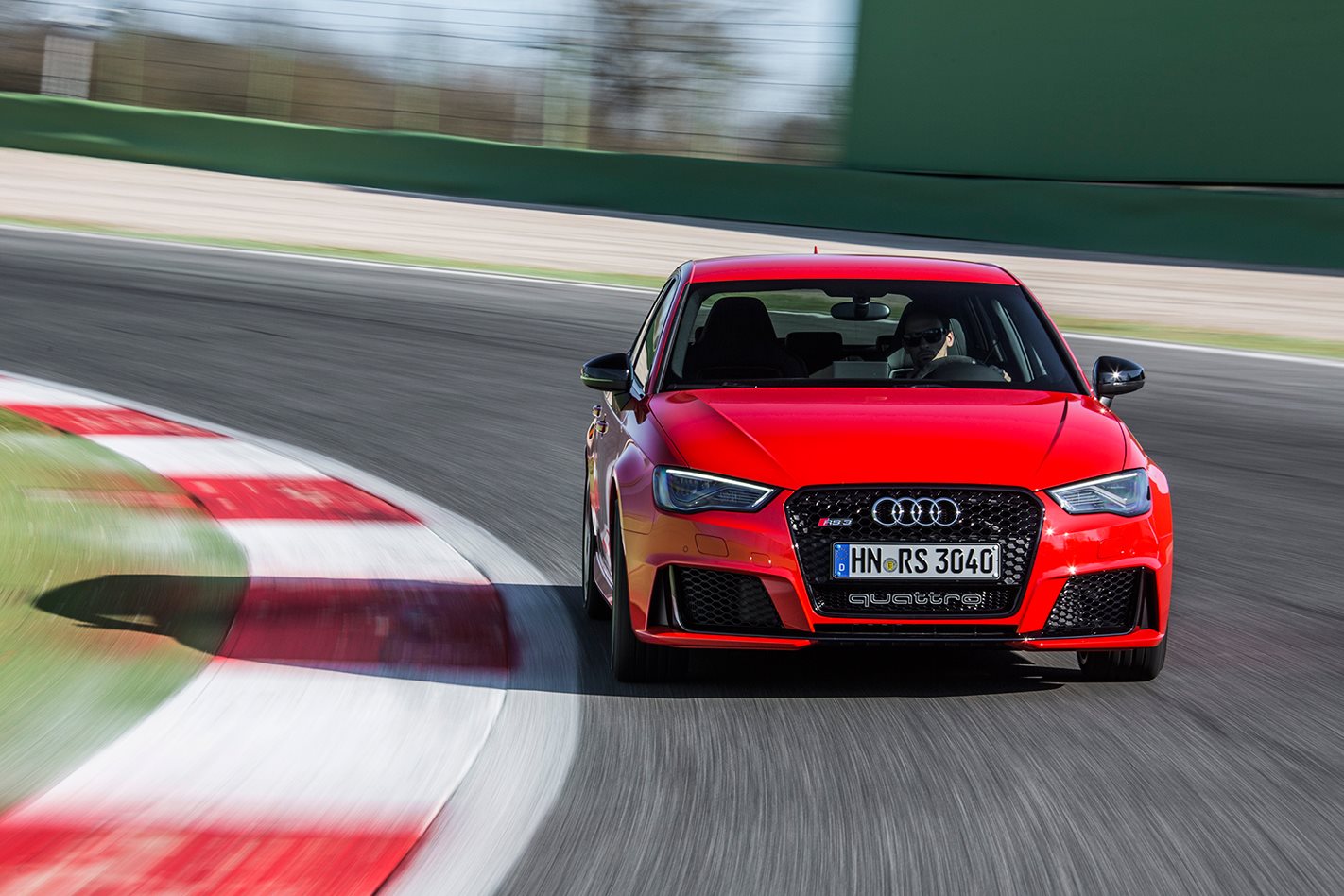 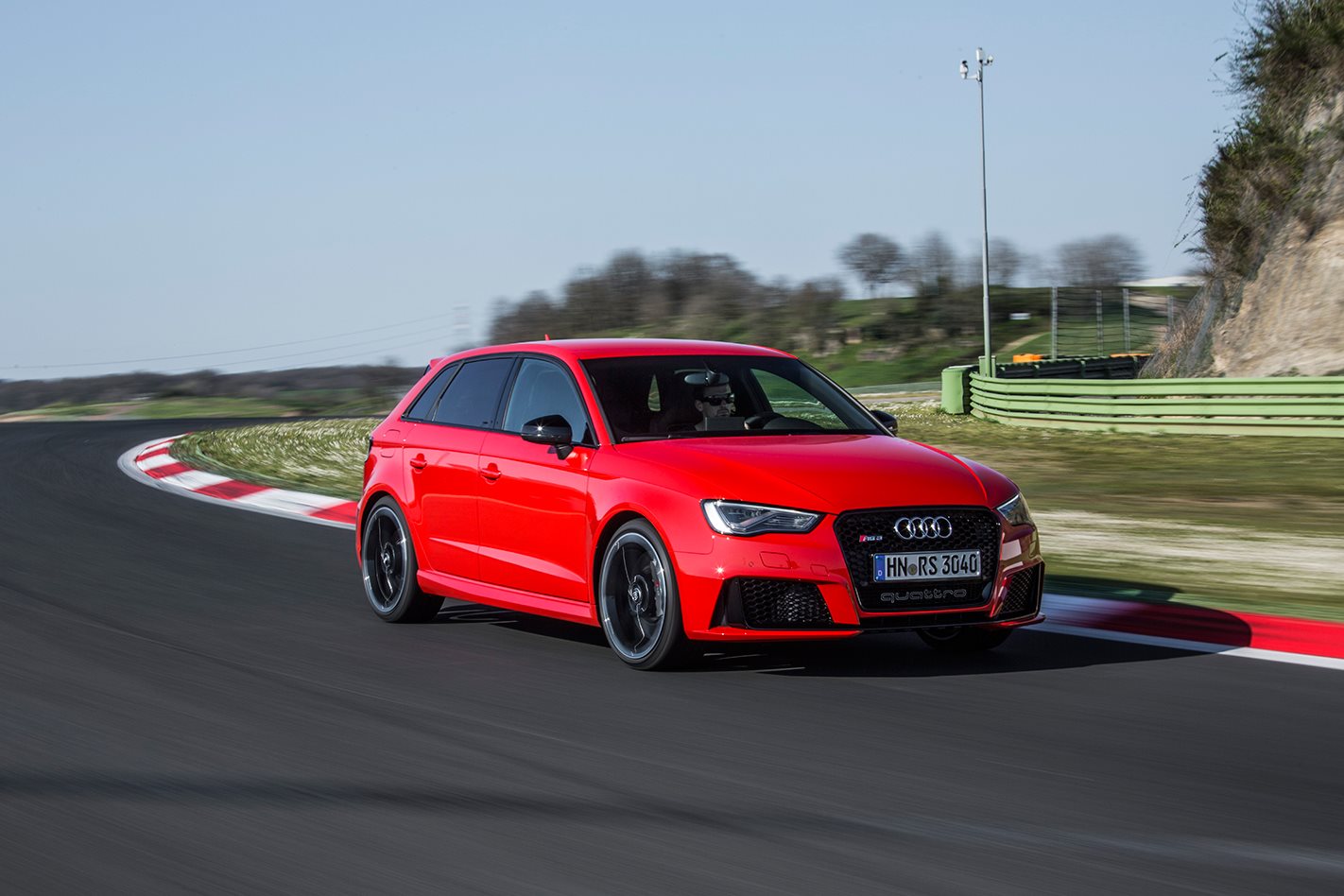 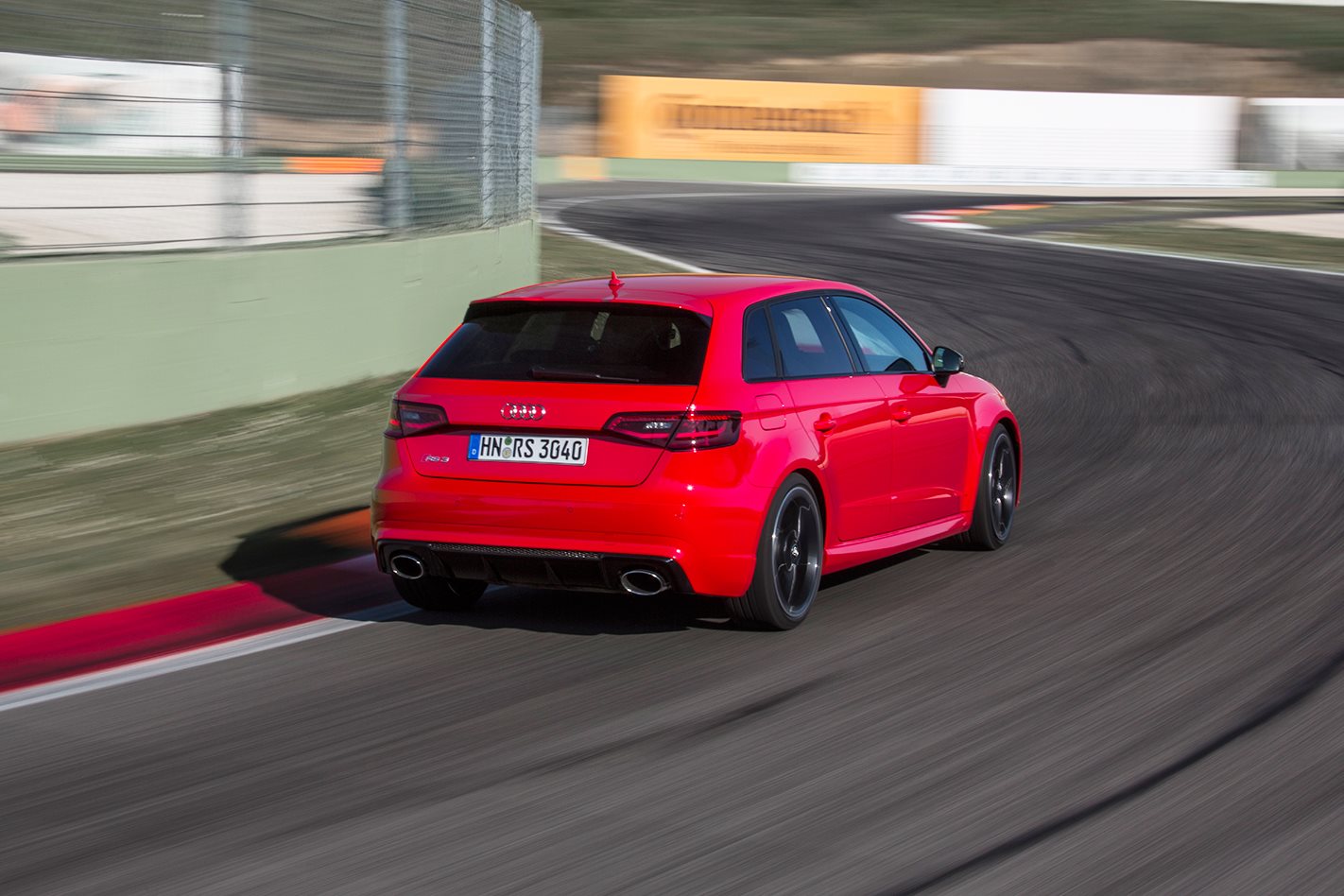 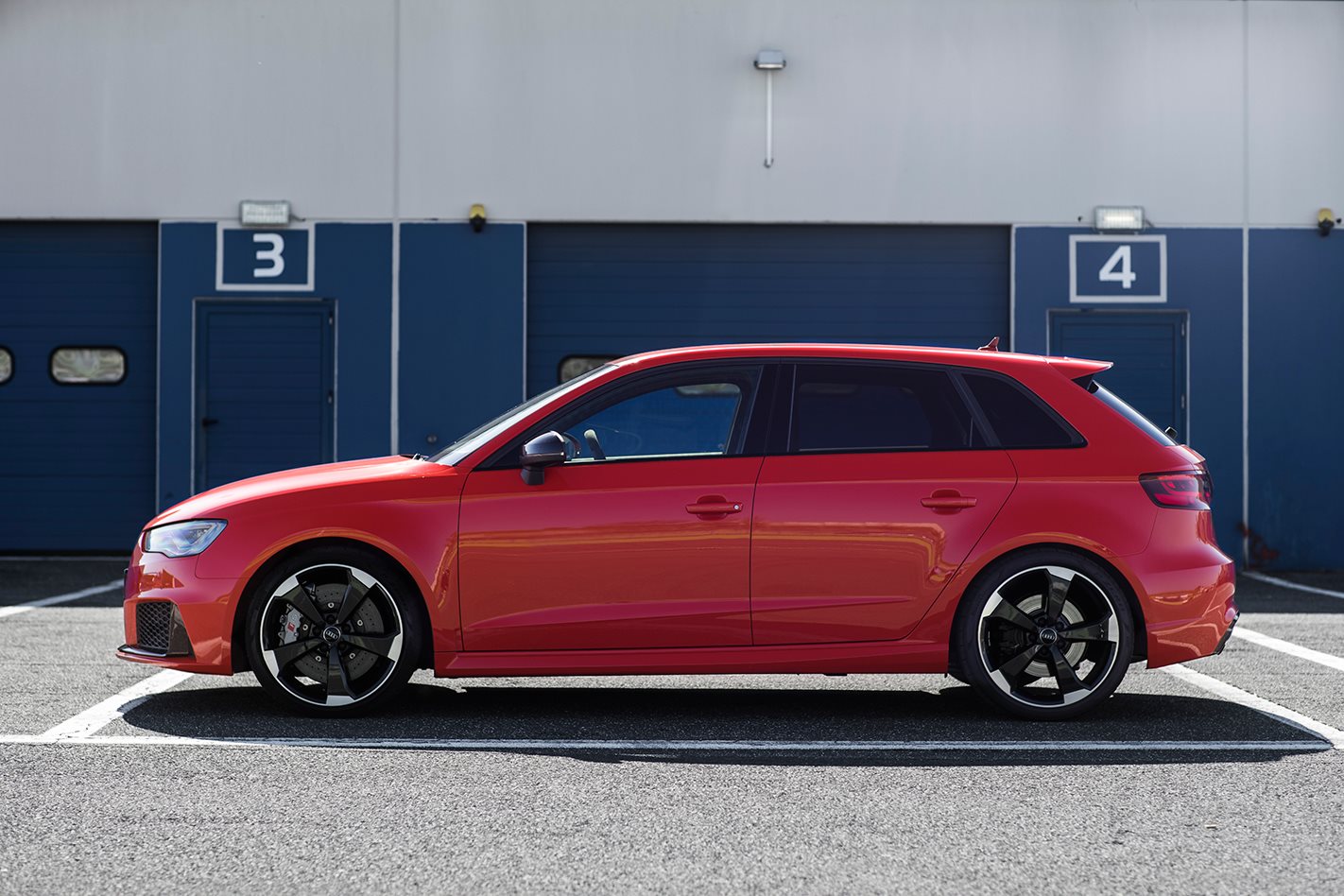 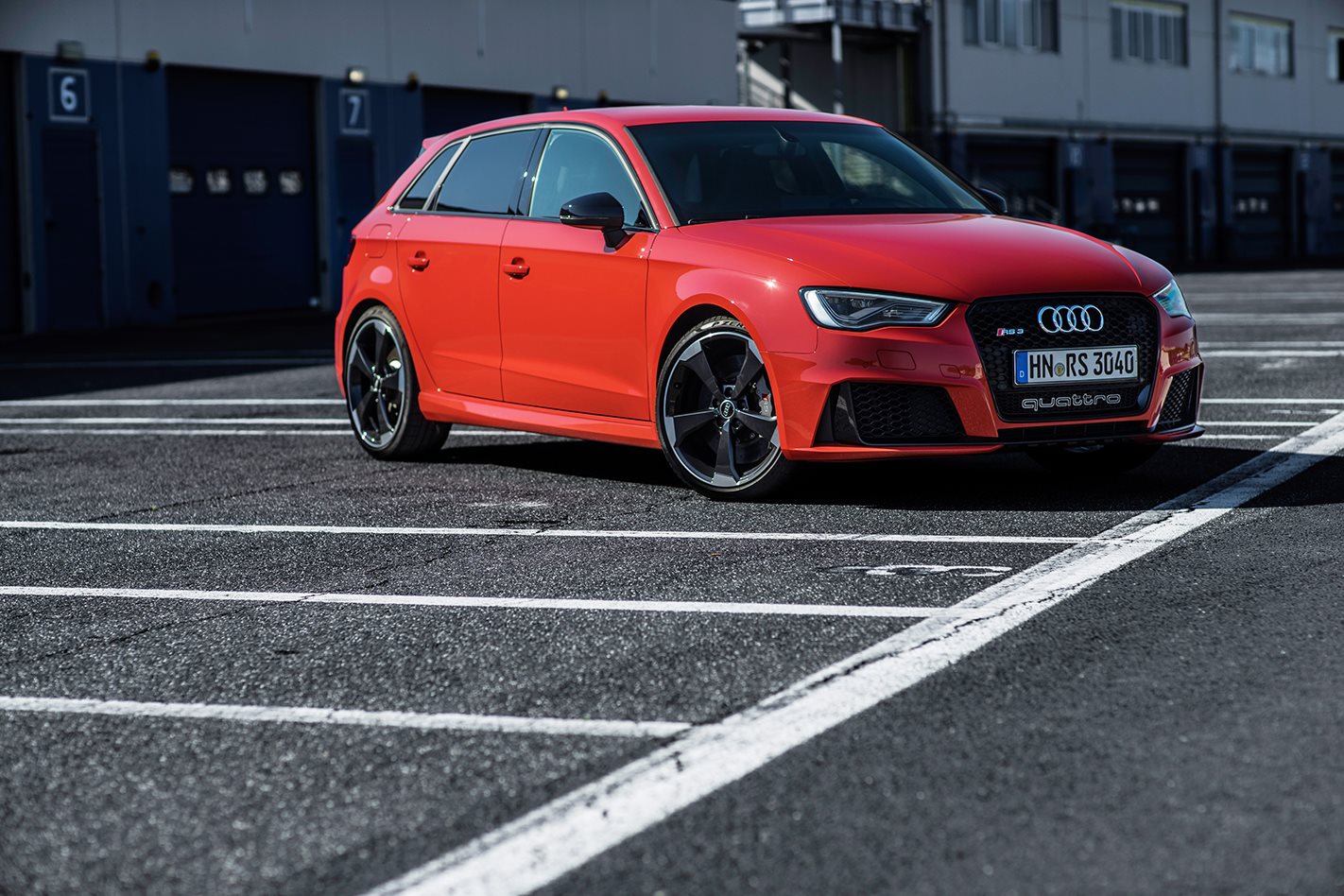 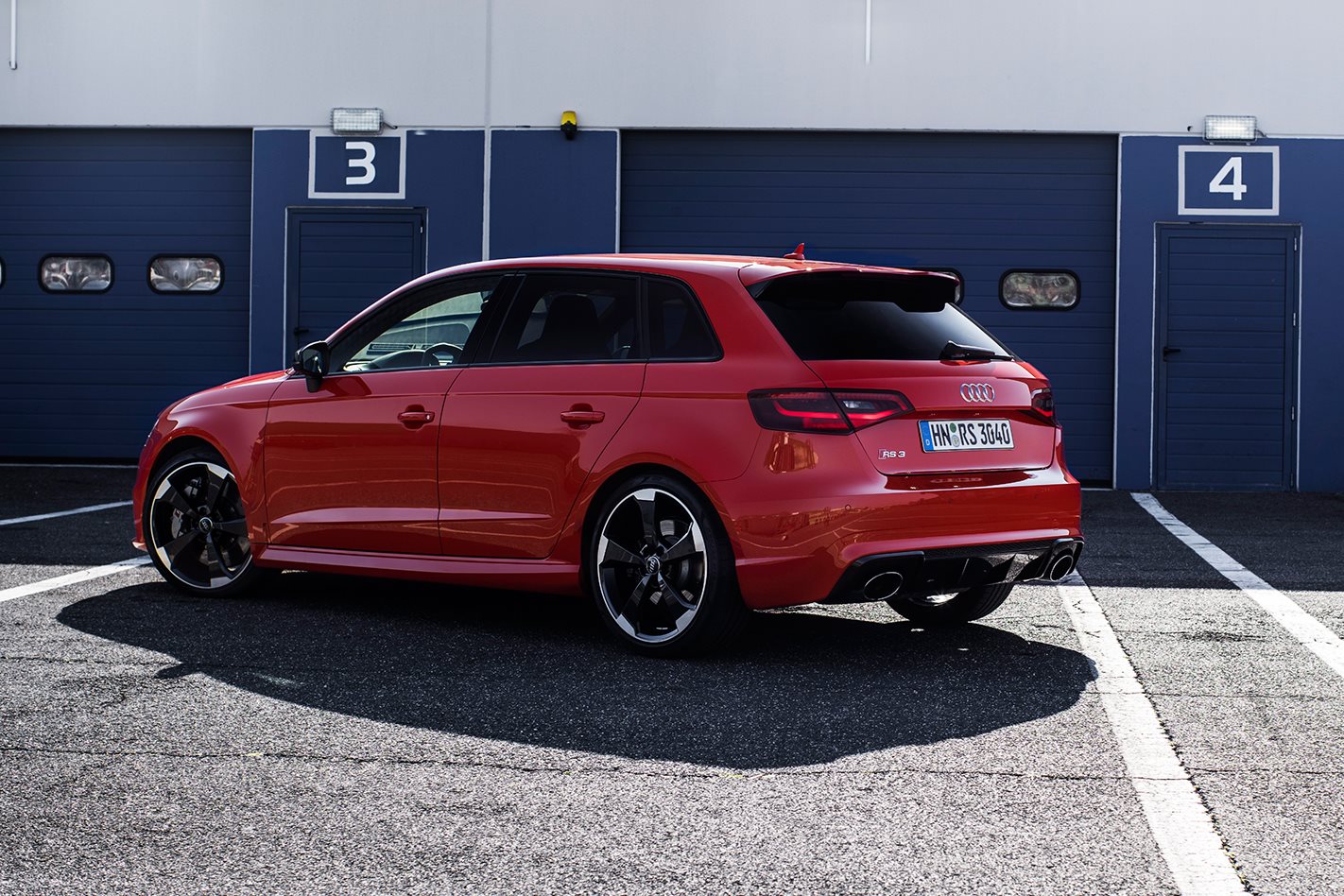 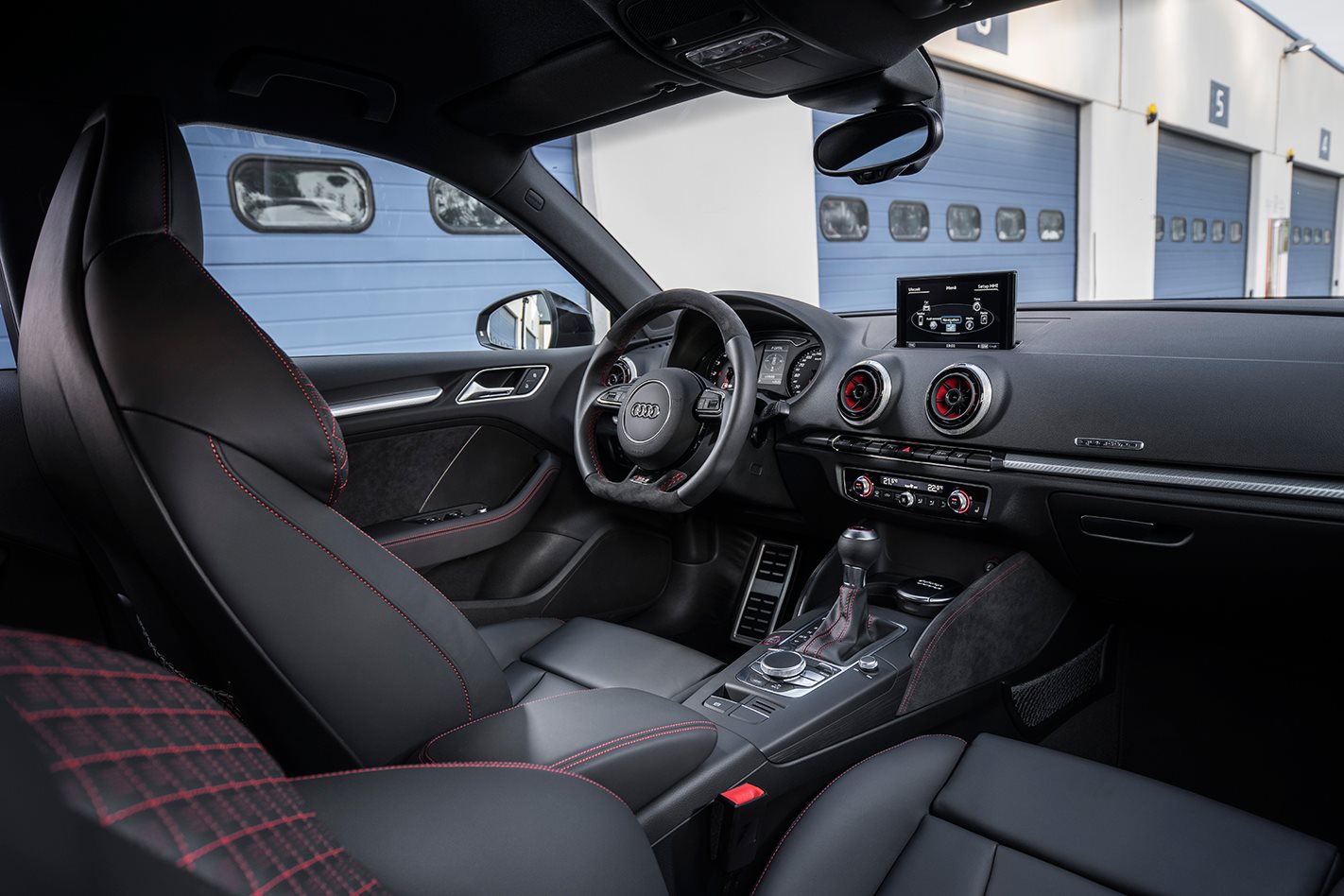 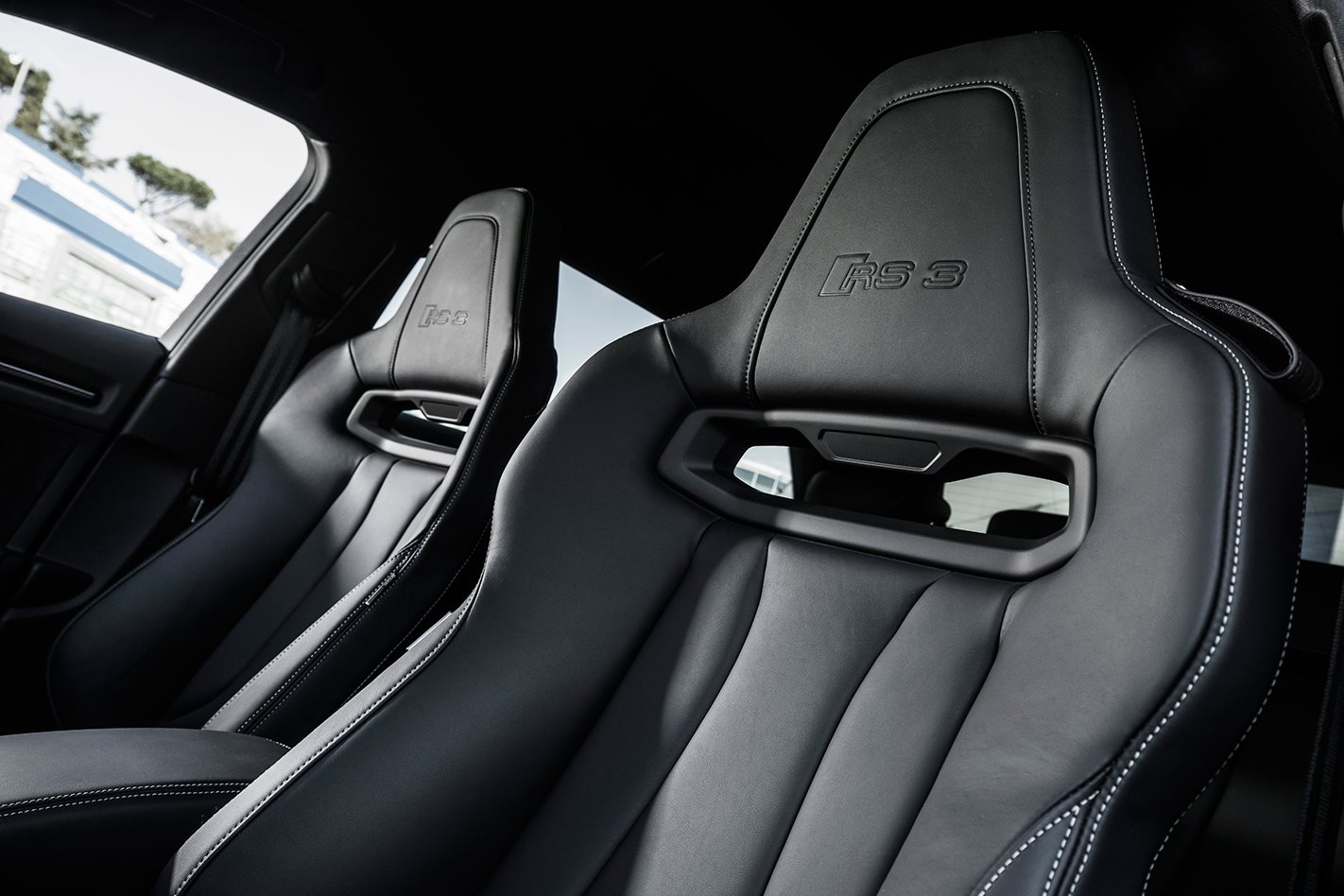 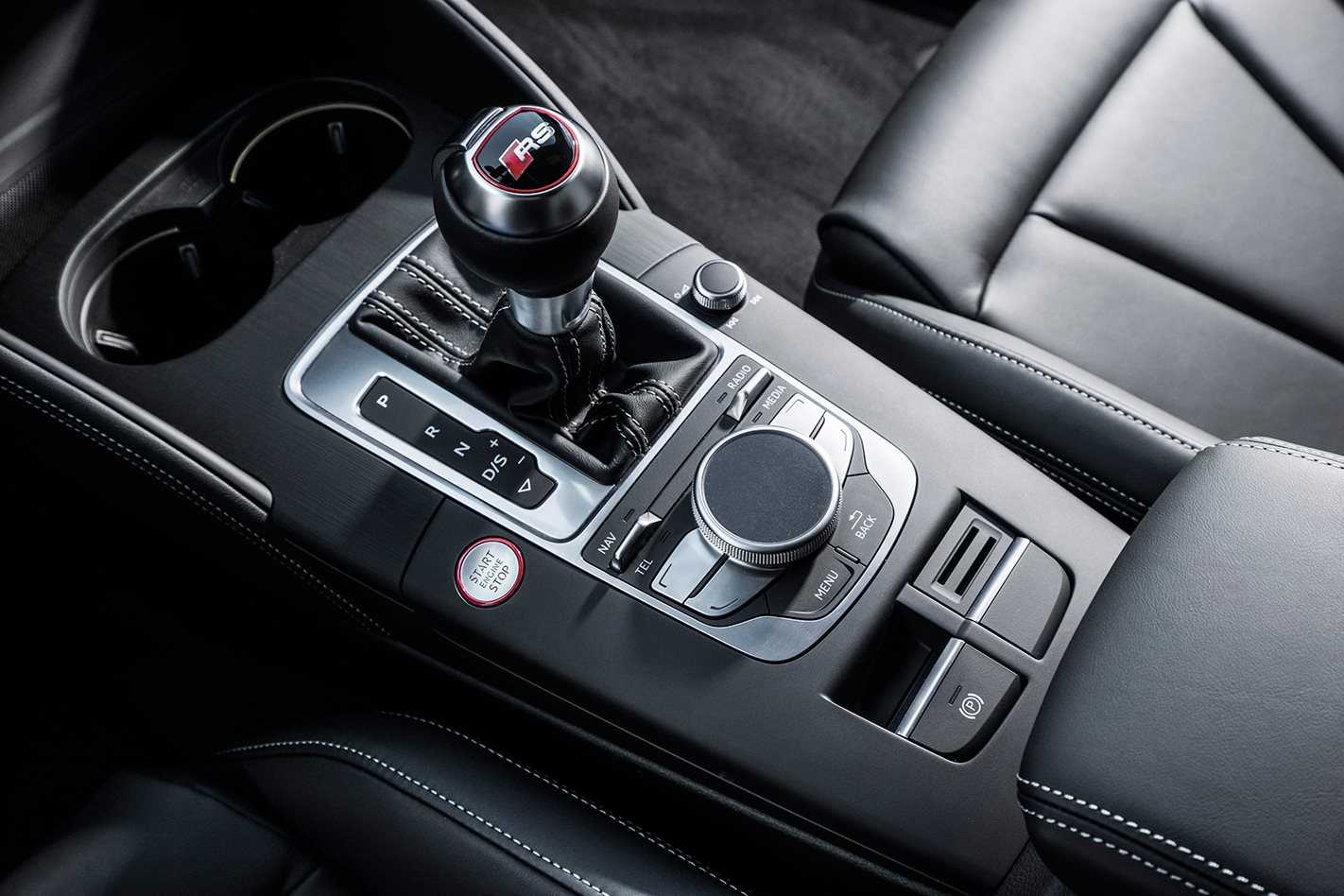 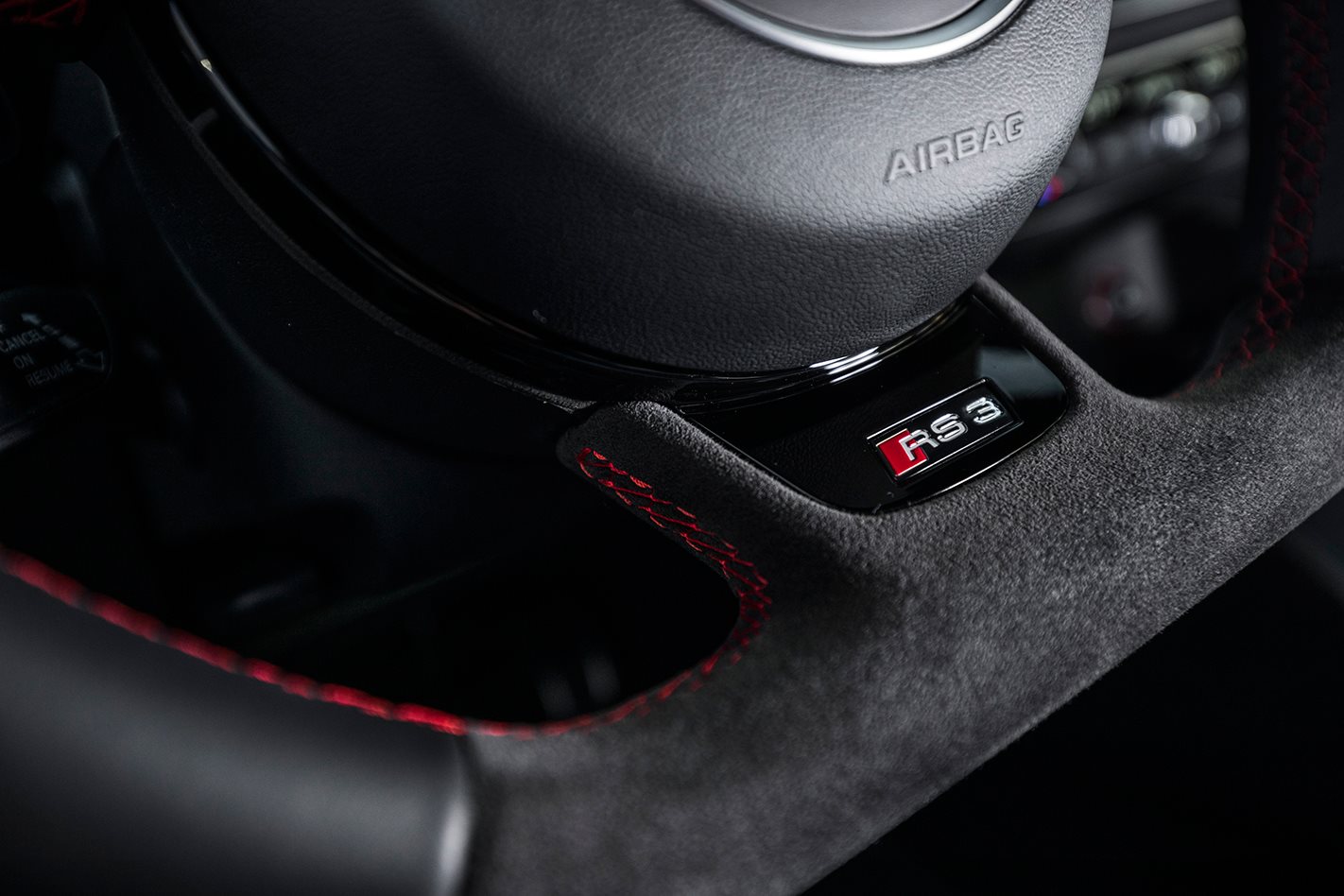