In reviving the legendary Giulia name-plate, Alfa Romeo is taking on many well- established rivals in the compact performance sedan street-fight.

WHAT IS IT?
Ten years in the making and after a couple of false starts, the Giulia marks Alfa Romeo’s return to the premium market, four years after the 159 sedan and wagon were discontinued. The Giulia is much more than just a rival for the BMW 3 Series, Audi A4 and Mercedes-Benz C-Class; it debuts an entirely new platform and range of engines that will also spawn two new SUVs as Alfa Romeo fights to build a future.

WHY WE’RE DRIVING IT
Because we want to know if Alfa Romeo has its mojo back. After four decades of lacklustre cars starting with the first AlfaSud in 1971, this is Alfa Romeo’s biggest and best chance to convince a new generation of consumers that the brand consists of more than just fond memories. Plus, we want to know if the dominant Germans – and Jaguar – finally have a serious rear-drive rival from Italy, a country known for its flair, exuberance and passion. MAIN RIVALS
This is the most cutthroat corner of the premium compact market. So the Giulia sedan will not have an easy time battling entrenched foes like the Audi A4, BMW 3 Series, Jaguar XE, Lexus IS and Mercedes-Benz C-Class.

THE WHEELS VERDICT
Alfa Romeo is back! Finally, Italy has produced a worthy alternative to the Germans. But while this is a considerable leap forward for Alfa Romeo, it’s not a game changer for the market. The Giulia’s base engine is competent rather than compelling, and the equipment list doesn’t leave its rivals for dead. A lot will depend on the price when the Giulia arrives in Oz in February 2017.

THE WHEELS REVIEW
AS BETS go, it doesn’t get much bigger or ballsier than Alfa Romeo’s massive Giulia gamble. Would you roll the dice with €5 billion ($A7.7 billion) on the line? More than that… with your existence on the line? 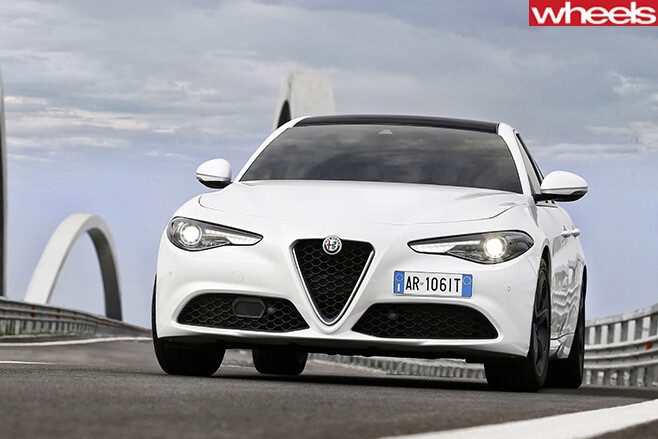 That’s effectively what Fiat Chrysler Automobiles (FCA, the company that owns Alfa Romeo) CEO Sergio Marchionne did three years ago when he challenged the then 103-year-old Alfa Romeo brand to relaunch itself into the cutthroat prestige car market.

Alfa Romeo has produced little of consequence in the last 30 years, and certainly very little that lives up to the brand’s aura – an aura born in the 1920s and strengthened in the following four decades. Alfisti, the brand’s most ardent loyalists, consider the AlfaSud, the company’s first front-drive car launched in 1972, as the beginning of the end of Alfa’s glory years. Since then it’s been nothing but mediocre models, or passably good models hampered by reliability and quality issues.

Now, Alfa Romeo is back. And how! Wheels has driven the Giulia mid-size sedan eight months ahead of its Australian launch in February 2017, and we were blown away by its competence and capabilities in almost all tangible areas. Typically, after driving a new car only on European roads, we’d reserve the superlatives and temper our praise until we’d driven it on Aussie roads, and against Australian-spec rivals. But based on our experience on the Balocco test track and an extensive road drive in urban and country conditions north of Milan, Alfa Romeo should be justifiably proud of what it has achieved with the Giulia. 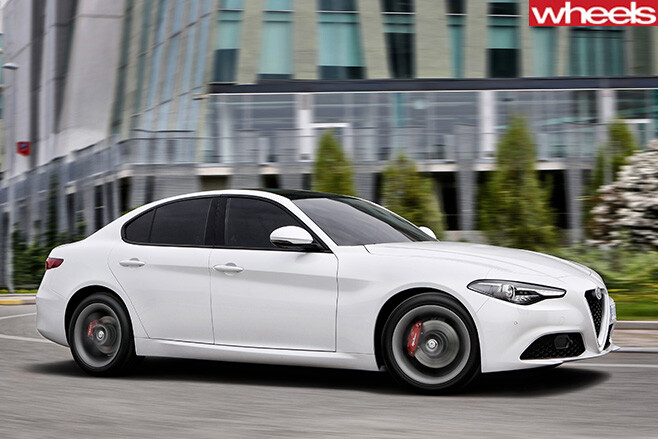 To be clear though, while the Giulia is a massive leap forward for an Italian brand that languished too long, it’s not going to blow classy and established rivals like the Audi A4, BMW 3 Series, Jaguar XE and Mercedes C-Class into oblivion. The Giulia is, in essence, Alfa Romeo making up for lost time, catching up in one big leap. It’s still got a tough fight ahead if it’s to take honours in this hotly contested premium market segment. But, for the first time in decades, Alfa Romeo truly has a worthy rival for those brands.

Talk to Giulia project boss Philippe Krief and he’ll tell you work on the project started with a clean sheet on April 29, 2013. That’s only partly true. Work began on a successor to the Giulia’s predecessor, the 159 (2004-11) in 2007. Back then the plan centred on further development of the 159’s front-drive platform, which was subsequently scrapped.

Then Alfa Romeo explored a potential tie-up with BMW, a move that would have allowed Alfa to leverage the 3 Series’ rear-drive platform for its 159 successor, at a cost of just €750 million.

Sadly for us and for Alfa Romeo, that plan bit the dust when Alfa’s owner Fiat Automobiles started to sniff around bankrupt American brand Chrysler, then owned by equity investment company Cerberus. Fiat bought Chrysler in April 2009 and spent the next four years trying to get Fiat Chrysler Automobiles financially stable enough to fund a €5 billion Alfa Romeo rebirth. 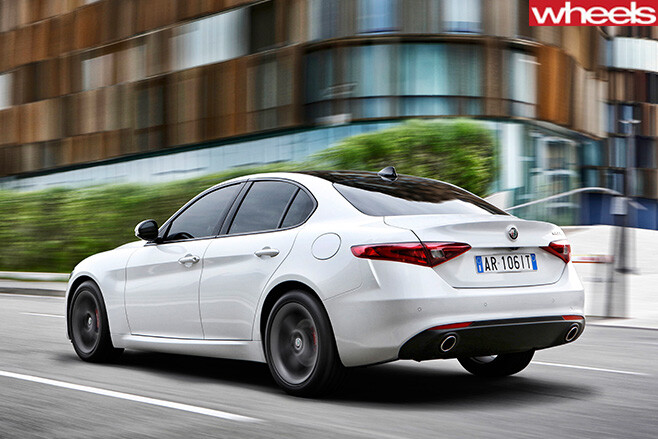 That rebirth is focused mainly on the Giulia, or more accurately, the ‘Giorgio’ platform underneath, which will also underpin two new Alfa Romeo SUVS in the next five years. After that it may also provide the building blocks for a 166 large sedan successor to challenge the BMW 5 Series, and maybe even the next generation Giulietta small hatchback (yes, rear drive), though neither of those business cases are signed off.

For now, back to the Giulia, which is slated for launch in Australia in February 2017. Three models will be offered initially, from the 147kW 2.0-litre turbo petrol model we’re evaluating here, through a 132kW 2.2-litre turbodiesel right up to the Alfa Romeo Giulia Quadrifoglio, a 375kW/600Nm performance monster intended to take the fight to BMW’s vaunted M3 and the Mercedes-AMG C63, among others.

There’s also talk of a second 2.0-litre turbocharged model with around 205kW to bridge the gap to the Quadrifoglio, but that is yet to be officially confirmed by Alfa Romeo.

What’s also unknown at this stage is pricing, and this could indeed be the Giulia’s biggest weakness. Alfa Romeo’s Australian distributor says pricing has not been finalised, and would only tell us to look to BMW 3 Series pricing for an indication. That suggests a $62K starting price for the Giulia base model (which we’re told will have leather interior, satnav and climate control), rising close to $70K for the turbodiesel (which will have more equipment than the base petrol), and leaping right up to $140K for the Quadrifoglio. 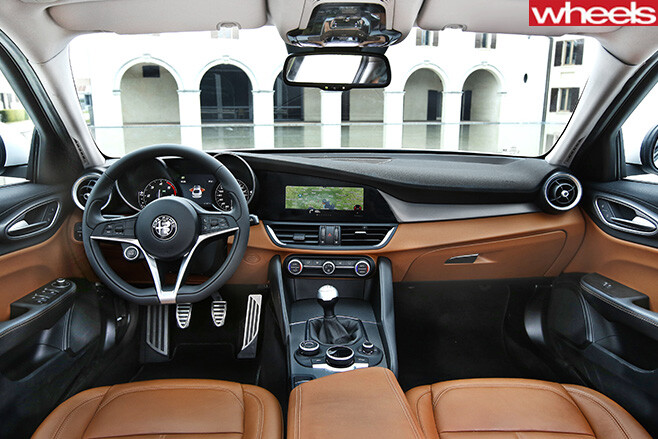 Based on the specification of the cars Wheels drove in Italy, the Giulia does not hold an equipment advantage over its rivals, especially not in the area of active safety, and so seemingly cannot justify lineball pricing. Add to that, wary consumers that are going to take time to be convinced Alfa Romeo’s quality issues are indeed in the past, and it could be a challenging 2017 for Giulia in Australia.

But if Giulia’s European on-road manners translate successfully to Australian conditions, then anyone who drives Alfa Romeo’s stunning new machine will find a lot to like. For starters, the Giulia’s Italian design is distinctive, outside and in. It’s also bigger than a 3 Series sedan: 15mm longer and 62mm wider, but 3mm shorter, so there’s plenty of interior space for four adults. Back seat headroom is plentiful, legroom less so but still good. The 480-litre boot measures up well against the BMW’s and is deep, though not as wide as some rivals.

In-cabin refinement is impressive, both in terms of materials chosen (except for hard plastics on door lowers) and noise isolation. Our only complaint about the base Giulia’s interior is that it’s all black, except for tiny splashes of red and blue on the temperature dials. That said, it’s a classy interior that Jaguar could learn a thing or two from. They all could. 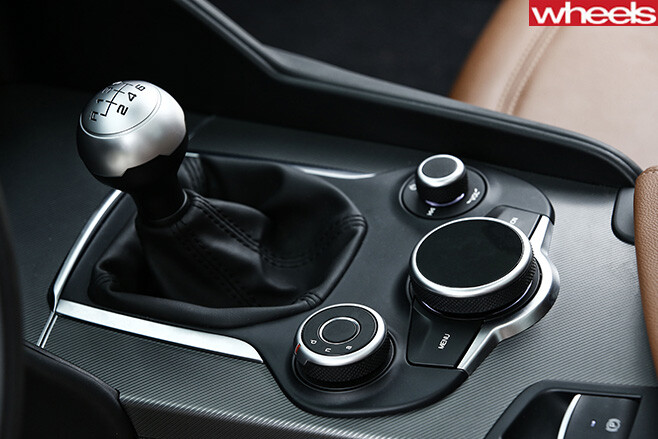 Despite riding on runflat tyres, the Giulia’s real-world ride does an outstanding job of isolating occupants from rough patches while providing an agile and sporty platform for attacking bends. The Alfa’s electric steering is a touch sticky just off centre, but is well weighted beyond that and has a very sporty ratio that points the car eagerly into corners. And the turning circle – a long-time front-drive Alfa weakness – is decently compact on this rear drive Alfa.

The 2.0-litre turbocharged four-cylinder engine – a completely new engine family, Alfa says – is a sweetie, but it just needs a few more herbs. It revs crisply, is refined, has no discernible turbo lag so it’s responsive, and works well with the Giulia’s eight-speed automatic transmission. The transmission can clunk through the odd gearchange, but it’s a rare occurrence. Overall it’s a decent drivetrain that is enough to make the Alfa competitive in its class but not a standout, though a combined cycle fuel economy average of 5.9L/100km is good.

I went into the Giulia launch with trepidation. I hoped for the best, but feared the worst. I needn’t have worried. Alfa Romeo’s €5 billion gamble appears to have paid off, big time.

And, assuming its European dynamics are equally at home Down Under, and that Alfa Romeo Australia can price Giulia sharply enough, premium sedan buyers now have an Italian worthy of cross-shopping with the Germans, the Japanese and the Brit.