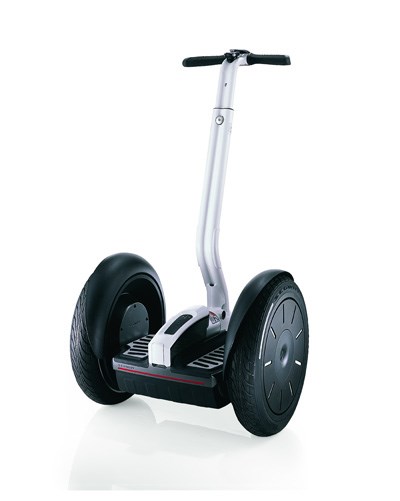 In 2001, Segway inventor Dean Kamen said: 'I would stake my reputation, my money and my time on the fact that 10 years from now, this will be the way many people in many places get around.'

A FEW weeks ago, I got a shot at the future I thought we were all going to have. And you know what? It was every bit as good as I'd thought it was going to be. But isn't.

Way back in 2001, when I was living in Paris, I got caught up in a low-level intrigue about a miraculous invention that was expected to revolutionise society and re-shape cities.

At the time, the thing was known only as 'Ginger'. Nobody knew if it was a nose-picking attachment for a ballpoint pen, a matter transponder or a device that deep-fried a chicken while it walked to your table. But its American inventor, Dean Kamen, was entirely credible.

Kamen holds more than 400 patents, most of them in the medical world, for life-saving stuff from intravascular stents to a wheelchair that climbs stairs. And I fully understand the potential of a machine to change the world, having made my career from one that did.


Finally, in December 2001, Ginger was unveiled as a ... well, a sort of scootery-looking, self-balancing, trolley-like platform transporter thing. Thank God it had a name - Segway - because there's otherwise no way to save syllables in accurately describing it. I 'got it' immediately. Here we had a society with a dominant population of baby boomers, the older of whom were in their mid 50s. There was concern over finite fuels, global warming and social health. The motor car was being vilified.

Into this whirred the Segway, a device that basically took the walking out of walking. More to the point, it took 1.8 tonnes and 300 grams of CO2 per kilometre out of walking. Maybe it was living in Paris without (like more than half of Parisians) owning a car, but by then I was already a bit uncool with the idea of driving 500 metres when there were so many other options.

Sure, you look like a dick on most of them. I know I do on my kick-scooter or my pushbike. But I'll excuse anything, except a unicycle. No, Tah'quinn, it does not make you look arty and interesting. And pull your bloody pants up. So I read everything I could about the Segway and gawked and pawed unashamedly when I first saw a Michelin person waltzing with one at a motor show. It balances itself by reacting to the fore-aft pressure of your feet, literally keeping itself underneath you. Steering on these first-gen models was via a simple twist-grip.

In no time, though, I noticed that other people weren't 'getting' the Segway at all. I started reading and hearing comments like, "Can you imagine the footpaths teeming with those things? Why, folks will be skittled willy-nilly to the billy-o." Never mind that a Segway is narrower and much more directionally stable than your average elderly pedestrian. People fretted about falling off one; you are a towering 20 centimetres from the ground.

Dumbshit transport authorities went into apoplexy, their 10-dot-per-inch brains unable to process anything outside the silhouette of a Camry. In 2004, Australia, needless to say, rejected applications to import them. Before I knew it, the Segway had turned into the BMW C1 scooter, the Concorde, the Sinclair C5.

Anyway, a few weeks ago, I got to have a ride on one. It was the second-generation model, with steering via an even simpler, leaning handlebar column. It was totally great. I could have ridden it with my brain tied behind my back.

Riding it restored my faith in cynicism. I recently read a sign on a train in Sydney that stated more than 100 people every year fall through the gap between a train and the platform. 'It may seem silly...' began
the sticker.