Pontiac was a car before it was a potato. As is typical of US brands, Pontiac has often been marked by two or more emblems, including the silver streaks and from 1959 the famous split grille.


The first Pontiac badge was a literal affair, reflecting the fact that the brand name was purloined from the chief of the Ottawa Indians. It featured two overlapping circles, one containing the left profile of an Indian chief. Above this head was the word PONTIAC with CHIEF OF THE SIXES around the bottom. (Unlike cheaper Chevrolet in Alfred P. Sloan junior's elaborately masterminded product hierarchy, the 1926 Pontiac came with a six-pack, but this differentiation was short-lived.)

The other circle (tails, as it were, to the Indian's head) carried a laurel wreath and PRODUCT OF GENERAL MOTORS lettering.

In 1929, this fussy arrangement was replaced by a Pontiac bonnet emblem and Pontiac script on the radiator grille. Many 1930s models ran the logo on the bonnet sides, by now picked out in bright red; Chief Pontiac's head in silhouette with flowing headdress. Appropriately, this racist theme was dropped on the radical-looking 'Wide Track' 1959 models with a downward thrusting chrome-enclosed red dart splitting the grille sections. 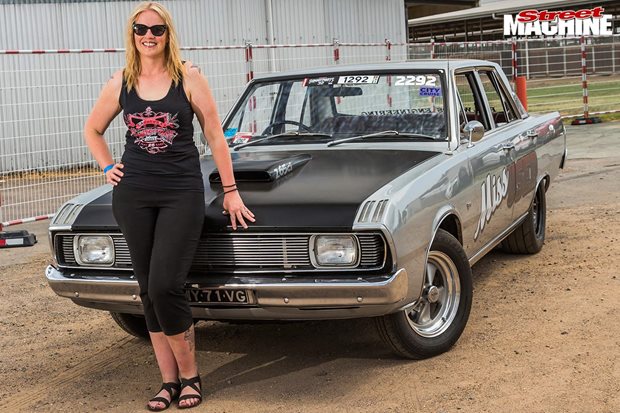 Mardi Knight bought her VG Valiant 11 years ago and now that it's fitted with a new 265 built last year, she's hoping to get back on the track very soon 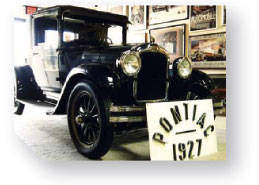 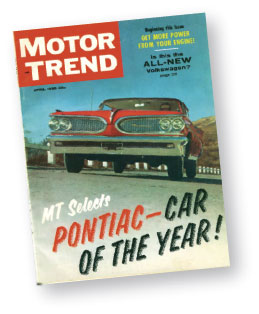