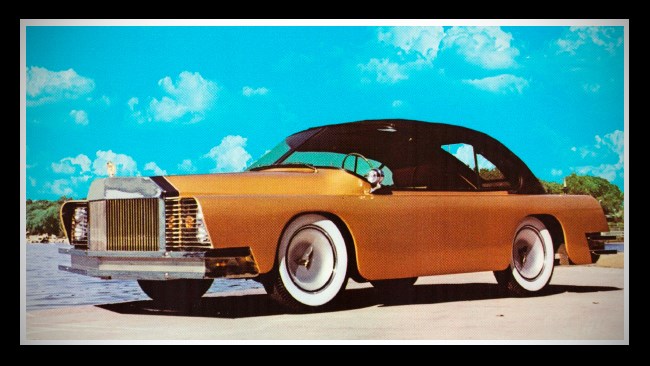 In 1967, one man figured GM’s flagship was too basic, and that the ultimate luxury car should look more like this…

Call us Naderites, but the notion of a three-tonne car with just one door, a refrigerator and a butane-fuelled fireplace doesn’t sound all that crashworthy. Unless you intend to film it.

There again, who are we to argue with a self-professed inventive genius like Bruce Baldwin Mohs.

The Wisconsin-domiciled Mohs is often described as a builder of seaplanes and innovative, luxurious automobiles. There’s scant evidence of the former, but thankfully, some comical evidence of the latter.

Born in 1934, Mohs was always this inventive. At 14 he built a tandem four-seater motor scooter featuring a supercharged, horizontal-twin engine and hydraulic brakes. According to an August 1978 article in The Rotarian, this was followed over the years by “a bicycle sidecar, electric and amphibious motor scooters, a mini-motorcycle and a tilting tractor seat”.

The centrifugal seat would be one of infinite oddities embodied in Mohs’ 1967 piece de ridicule, the Ostentatienne Opera Sedan limousine. Truck maker International Harvester contributed the chassis and 5.0-litre V8 engine (and optional 9.0-litre V8), while Mohs himself penned the 6.3m-long, 2.3m-wide and 1.75m-tall body.

Also notable is the absence of doors, sacrificed for the ‘safety’ of solid steel girders along each side. Occupants enter via a walk-in rear hatch, similar to a flying saucer. Indeed, Mohs may have picked up the idea while being abducted by aliens.

Occupants would want for nothing in terms of luxury, and thus the Opera was equipped with a gold-detailed, walnut instrument panel, velvet upholstery, and a two-way radio system with home and office base-stations. As for the furnace? NFI.

Ah, but a Cadillac couldn’t go off-road with a hunting party of eight. Neither, for that matter, could the Ostentatienne Opera Sedan; a shortcoming so apparent to Mohs that in 1972, he produced the Safarikar Dual-Cowl Phaeton.

This sinister, matt-black beastie likewise had a Pantheon grille and International underpinnings, but otherwise might be mistaken for a troop-carrying Facel Vega.

Its aluminium body at least had doors – albeit, ones that opened on a sliding parallelogram arrangement – and a folding metal hardtop.

The exterior was upholstered in Naugahyde (aka vinyl), which Mohs promoted for its low maintenance. “You merely wet, wipe and dry for cleaning,” the brochure read.

Three front buckets, a three-person bench and a pair of dicky-seats in the fold-out boot made space for eight. However, the interior could also be reconfigured in the wild to provide sleeping accommodation for two adults and two children.

When it appeared in 1972, the Safarikar was advertised at a bargain US$14,500, although 4WD and the furnace were extra-cost options. While Mohs sold precisely no Ostentatienne Opera Sedans (how exclusive is that?), it’s believed that three Safarikars were built.

Still, Mohs made some sort of living from his cars, keeping them as exhibits in his German restaurant and motor museum.

Factors other than futile, flopped cars apparently conspired in Mohs’ 1988 financial downfall. In 1973, he trademarked the business name ‘Century 21’ in Wisconsin. This, amazingly, would prove nettlesome to a rapidly-expanding real estate corporation of the same name.

Mohs lost the legal fight in 1984, but in a modestly-titled autobiography The Amazing Mr Mohs published the same year, continued to assert his ownership of the trademark. An amended judgment went against him in February 1988 and Mohs filed for bankruptcy six months later.