Holden’s new kid on the block is challenging Peter brock’s title as muscle car champion. Peter Robinson gets between the two contenders for the title fight.

The blokes at Fishermans Bend, Victoria, and Kidlington, England, have built easily the most effective weapon for road and track use since the legendary Phase III GTHO Ford Falcon of 1971.

That's not PR hype but cold fact. Holden's new Commodore SS Group A spells the end of Brock's HDT operation, at least when it comes to building modified Holdens. Good as the Brockmobiles have been, there's no way the HDT can match the engineering skill, wind tunnel expertise, sheer dollars and marketing muscle that is going to build and shift 750 Group As in '88.

Battle of the Bruisers - March 1983
View this article in its original format in the archive. 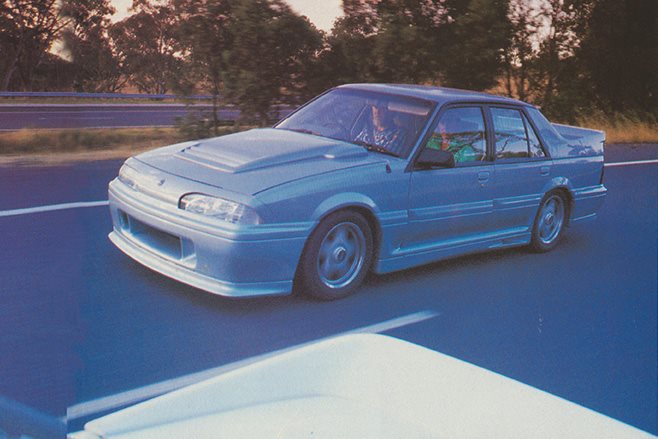 The blokes from Holden's engine company have created a brilliant fuel-injected version of the grizzled old five-litre bent eight, while Tom Walkinshaw's TWR team in England is responsible for the aero body kit that means the car needs 30 kW less to drive at 190 km/h than last year's Group A. Their combined toil has one aim - to take Holden to the chequered flag in touring car races around the world in 1988.

Lined up against the Group A is Brock's Group Three Signature series of HDT Commodores (the Holden name doesn't appear on the car). There's still the old carburettor V8 engine, and the now discredited body kit, yet the magic touch of Peter Brock remains evident in the Group Three's dynamics. 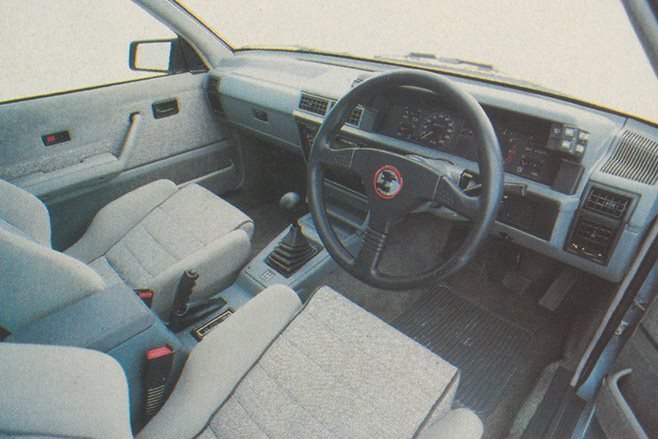 Comparing these two great road cars is like holding up a mirror. There is so much that is familiar in both. Yet while they are basically the same car under the skin, the differences are significant.

For starters, there's the totally over-the-top body kit on the Group A. If it didn't work so brilliantly in the wind tunnel it would be laughed off the street as an exercise in fibreglass foolishness.

From the deep tail section that sits atop the boot lid like a giant bird bath to the formidable front air dam, everything is targeted at lowering the drag factor and improving downforce for the track. From close up it looks mean and aggressive, clumsy and even bizarre, distinctive enough to hide its origin from many who see it for the first time. 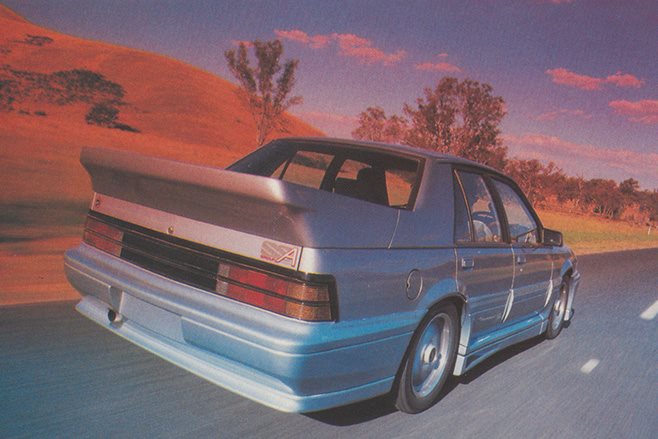 Watch it as it flashes past on the road and it all comes together. It is still short and dumpy, but the obvious add-on effect of the kit in close-up disappears. Now merged into a purposeful shape, the Group A snarls down the road, hugging the bitumen like a limpet.

In contrast, Brock's Group Three looks mild, though not so long ago it was regarded as the essence of potency. There's no hiding its Commodore beginnings, and its drag co-efficient is around 0.43 compared with the 0.32 of the Group A. The Group A’s aerodynamic advantage is considerable and benefits performance, roadholding and fuel consumption.

When we asked the HDT for a Group Three for this comparison we never expected to be given an automatic, but since 80 per cent of the Signature Series cars sold last year came with the three-speed auto it seems fitting enough. 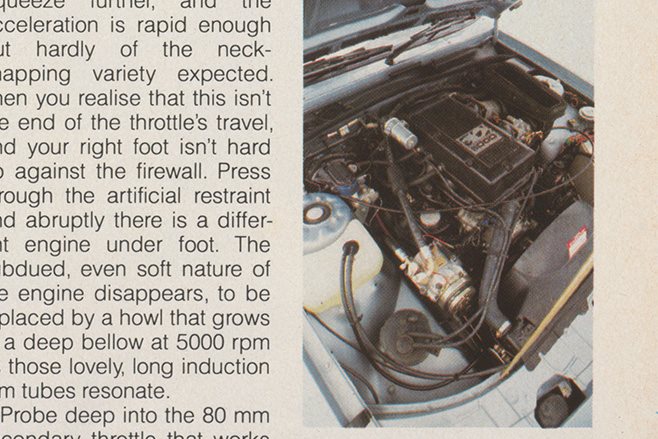 You can have any gearbox you like in Holden's Group A, so long as it's the Borg Warner T5 five-speed manual.

Crank the engine over and it fires almost instantly. The idle is a smooth and quiet 500 rpm, and gives not even a whisper of what is to come. The clutch that felt strong and springy when the car was stationary is firm and beautifully positive on the move, and is stronger than the soft clutches fitted in previous manual V8 Commodores we've driven. The specs tell us the clutch has been improved to accept 15 per cent more torque, and that feels about right. Clutch and gearbox work superbly together. The short, precise gear change is perfectly matched to the robust character of the clutch. Swapping cogs is a pleasure.

Prod the accelerator timidly and the V8 responds promptly. Squeeze further, and the acceleration is rapid enough but hardly of the neck-snapping variety expected. Then you realise that this isn't the end of the throttle's travel, and your right foot isn't hard up against the firewall. Press through the artificial restraint and abruptly there is a different engine under foot. The subdued, even soft nature of the engine disappears, to be replaced by a howl that grows to a deep bellow at 5000 rpm as those lovely, long induction ram tubes resonate. 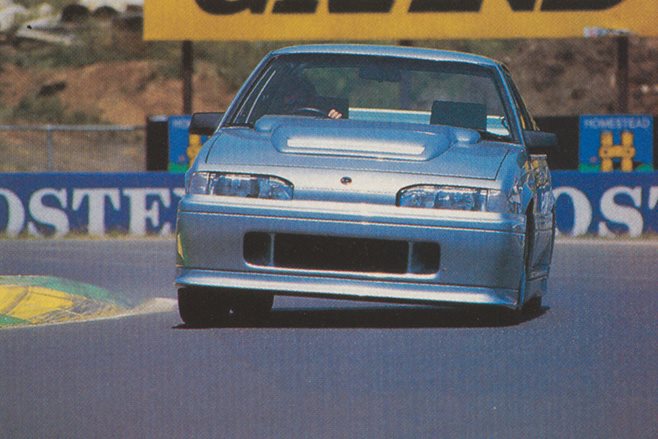 Probe deep into the 80 mm secondary throttle that works simultaneously with the primary induction, and you quickly realise how potent this engine is across its entire rev range, from the calm idle right through to the roar just before the 5600 rpm cut-out. The mid-range power is exceptional and it is here the injected V8 shows its brawn, pulling hard and clean with a responsiveness that no carburettor Holden V8 is going to match. Its flexibility is phenomenal.

At 1000 rpm in fifth gear it will happily accept full throttle and pull away briskly, the exhaust note growing deeper from 2000 rpm. For all this impressive, tractable nature it is an engine that wants to rev to the cut-out. 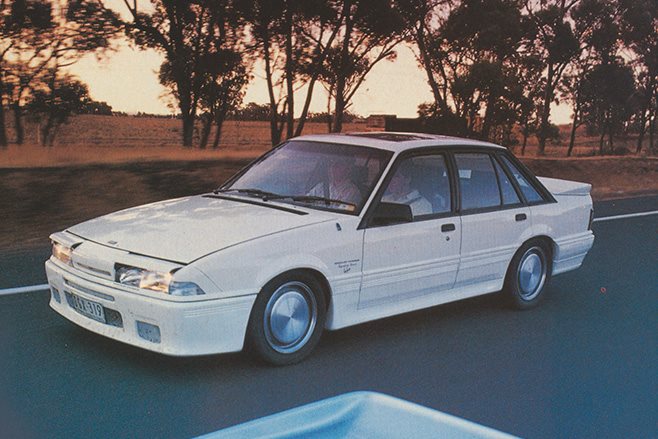 And, like a Ferrari V12, there is a compelling feeling that it is better to change down one or even two gears to enjoy maximum acceleration, watch the tacho needle swing relentlessly through its arc and to hear yet again the glorious sound it creates.

Relaxed cruising calls for no more than an upward gear change – at 160 km/h the engine is turning over at just 3150 rpm in fifth gear – while a downward change turns it into a machine of rare capability.

The gear ratios match the engine perfectly, second is good for 106 km/h, third a marvellous 155 km/h that simply blows everything else into the weeds, while fourth will run to the cut-out at 207 km/h. Top speed, well, we don't know. At the time of writing nobody had run the production car out to a true maximum speed. We do know it will go to 230 km/h or 4500 rpm in fifth. Holden estimates it will pull in 233 km/h – 146 mph in the old language. 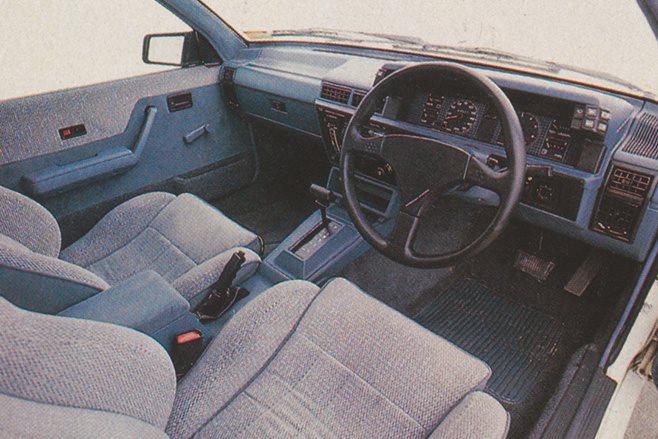 Against the stopwatch the acceleration is breathtaking. We stopped the print-out three times at under 15 seconds over a standing 400 metres with a best of 14.85 seconds and reckon, with a well run-in engine and a more grippy surface, that even 14.5 seconds is possible. The beauty of the Group A is the engine's ability to deliver maximum power all day without any hesitation or temperamental behaviour.

An automatic HDT Commodore can't hope to generate the same acceleration times. Look beyond the standing 400m time, however, and you will find Brock's car is also a magnificent performer. Any automatic that takes just 15.8 seconds over the quarter is rapid indeed, and once the Group Three has overcome its relatively leisurely initial acceleration it virtually matches the Group A all the way to 120 km/h. There's 1.2 seconds difference to 50 km/h, but this has grown by only 0.1 second to 120 km/h. Above this speed the superior aerodynamics of the Group A begin to have an effect and the Brock car can't keep up. 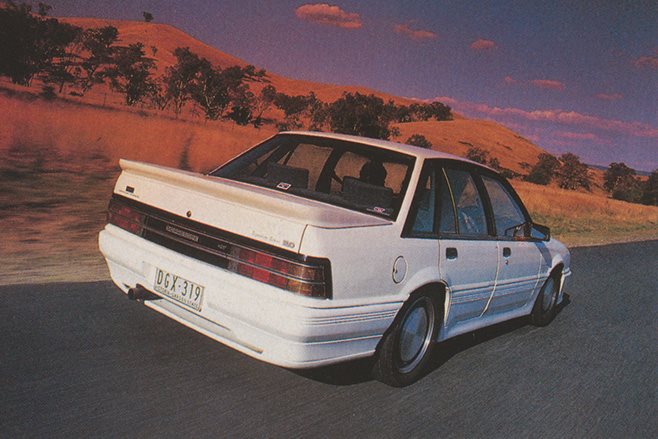 There's a healthy, slightly uneven note to the Group Three's exhaust burble, and the engine always requires more churning to start. There is a precision and crispness to the Holden automatic in the Brock car that we've never experienced before. It's a Brock modification that has been available on police Commodores for years and should be fitted on all Commodores.

Comparative figures reveal the Brock Group Three matches the Group A across the 400 m, while the old carburettor Group A was more than half a second slower. The HDT car lacks the wail of the Group A, struggles through valve train noises above 5000 rpm, and doesn't have the crisp, free-revving ability of the injected engine. And it can't hope to match the official car's top speed.

Comparing the fuel consumption of an automatic with a manual car always works to the disadvantage of the auto. Never more so in this case. Over a hard 220 km on the road the Group A returned 6.0 km/L (16.9 mpg) while the automatic HOT car gave a disappointing 4.0 km/L (11.2 mpg). The Holden comes with the long-range 84-litre petrol tank where the Group Three must make do with the standard 63-litre tank. 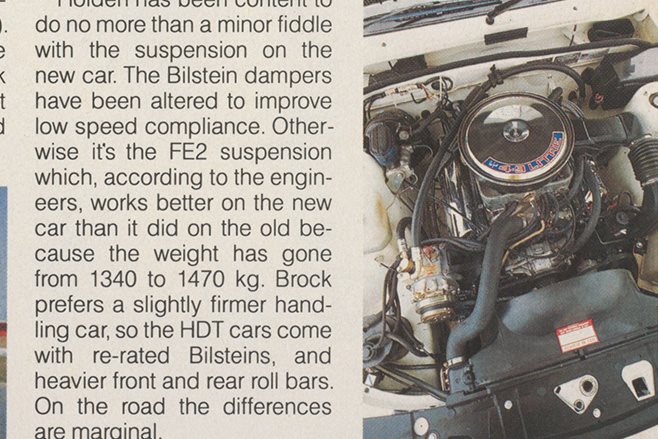 Holden has been content to do no more than a minor fiddle with the suspension on the new car. The Bilstein dampers have been altered to improve low speed compliance. Otherwise it's the FE2 suspension which, according to the engineers, works better on the new car than it did on the old because the weight has gone from 1340 to 1470 kg. Brock prefers a slightly firmer handling car, so the HDT cars come with re-rated Bilsteins, and heavier front and rear roll bars.

On the road the differences are marginal. Brock still insists his cars run 22 psi for road use. This made valid comparisons difficult, for the Holden men recommend at least 30 psi. The day we did this head-to-head shoot-out we had representatives of both companies present, making it impossible to run equal pressures.

Across the blacktop these cars are impressive by any standards, their sheer power and roadholding combining to flatten the steepest hills and straighten the tightest corners. The softer tyres of the Brock cancel out any advantage it might gain with its firmer suspension, so the relative lack of roll stiffness of the Group A must be balanced against the sidewall movement of the Brock car. Both still suffer from the performance Commodore's long history of rear axle problems which induces bump steer from the rear over undulations and bumps. Only an independent rear suspension will provide an effective solution to this dilemma. At very high speeds the Group A’s outstanding aerodynamics improve stability, for above 160 km/h you can feel the body being pushed down into the road, where the Group Three becomes a touch floaty. The advantages in racing must be considerable. 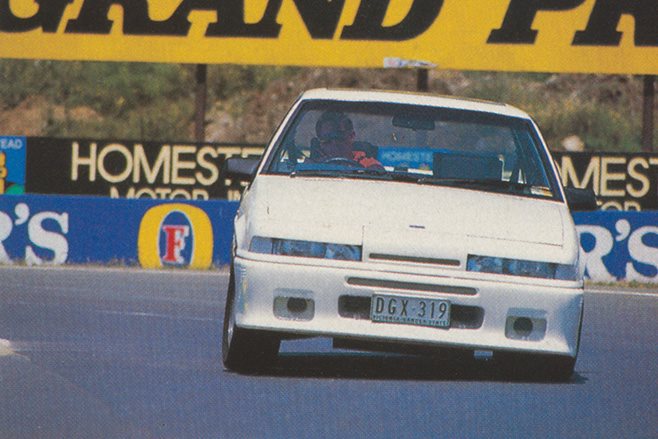 Inside there is little to choose between them. Both are Commodores, and nothing is going to disguise it. Momo steering wheels and heavily bolstered bucket seats provide a comfortable driving environment in both. Air conditioning, central locking, an alarm system and a superior sound system are standard on both. The Group A also gets power windows.

There's no doubt we have a new quintessential Australian muscle car. Holden's Group A deserves to be ranked with the finest. Its engine's versatility and the body's aerodynamics have created an instant classic. There's no argument. At around $46,000 you must buy the Holden. A Brockised Group A? Maybe the General can still learn a thing or two from its once favourite son, though you get the impression Holden made up its mind the Group A was intended to show the world, and not least Peter Brock, that when the General got serious no racing driver-turned-car builder could ever hope to meet the challenge.