Sedan no more as next large Holden gets a tailgate

GET ready for the Holden Commodore hatch!

That’s right, the first fully imported Commodore, to be revealed in Europe late this year ahead of a 2017 arrival Down Under, will come only in hatchback and wagon body styles.

For the first time in 38 years, there will be no Commodore sedan.

Wheels can exclusively confirm that the Opel Insignia that will form the basis for the Commodore range beyond 2017 will come off the Russelsheim production line in Germany as a hatch and wagon – including a higher-riding allroad-style all-terrain wagon. There will be no three-box sedan.

The hatchback layout is aimed primarily at European markets but may also play well locally, with Australian buyers increasingly giving sedans the boot. 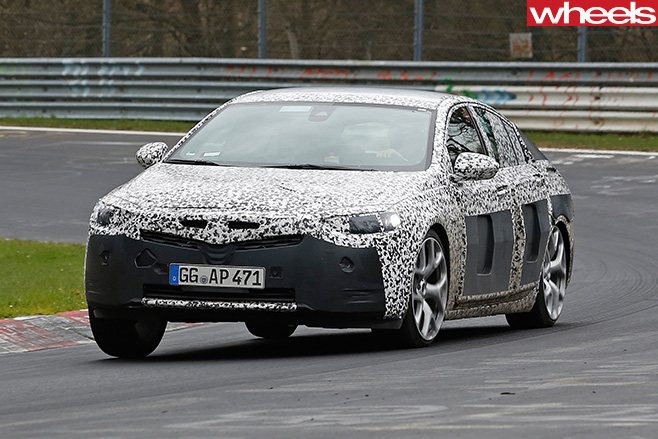 All spy pictures of the crucial new model – including these fresh images of the sporty OPC model testing at the Nurburgring – have been only of the hatch, prompting Wheels’ European investigation.

The closest thing to a Commodore sedan in the GM future-model closet is the Buick Regal, which shares the Insignia’s E2XX platform. But Wheels understands that body style will not come from Russelsheim.

While the death of the Commodore sedan may shock the Holden faithful, the reality is Australians are shifting away from traditional three-box cars.

Two-thirds of the 300,000-odd small cars sold here each year are hatches, with younger buyers in particular more attracted to the flexibility and design of a lifting hatch. And mid-size sedans continue to perform poorly against the growing number of SUVs. 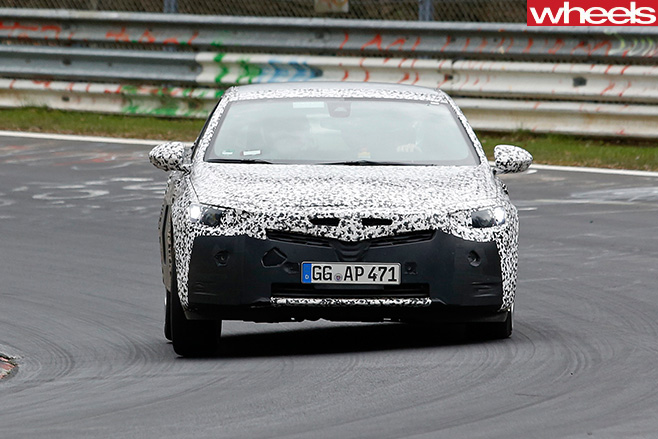 Hatchbacks aren’t foreign to fans of locally produced Holdens. As well as the Cruze hatch currently produced alongside Commodore at Elizabeth, Holden built Torana hatchbacks in the 1970s.

Holden has also toyed with the idea of a Commodore hatchback more recently (see breakout).

The Commodore hatch will be anything but small. Wheels has learned that the new Commodore will be slightly longer than the current VFII that ceases production in late 2017. 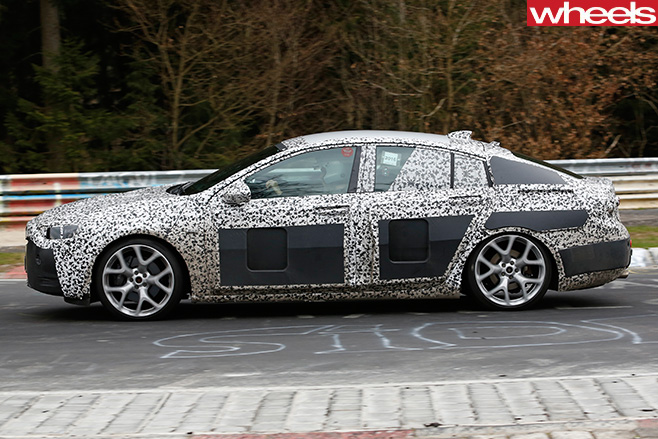 That’s partly because, for the first time, the Commodore will have an east-west engine layout driving the front wheels in base four-cylinder models, and all four wheels in the flagship V6 turbo. Front overhangs, then, will be longer than we’ve come to expect from rear-drive Commodores.

The wheelbase is likely to be about 2830mm, a full 85mm less than VFII. It’s also likely to be slightly narrower, the first time a Commodore has shrunk in width.

So expect a bit less interior space, although designers have worked to maximise packaging to maintain a spacious cabin – long the drawcard of locally produced Holden large cars.

The Commodore will also be lighter, though only just. Our spies tell us the twin-turbo V6-engined SS, which won’t be available here at launch, will weigh a smidge over 1700kg, not much below the 1744kg kerb weight of an auto V8-powered Commodore SS.

Blame that partly on the all-wheel-drive system, something that will help the imported SS get close to the current V8 SS’s 0-100km/h time of 4.9sec. 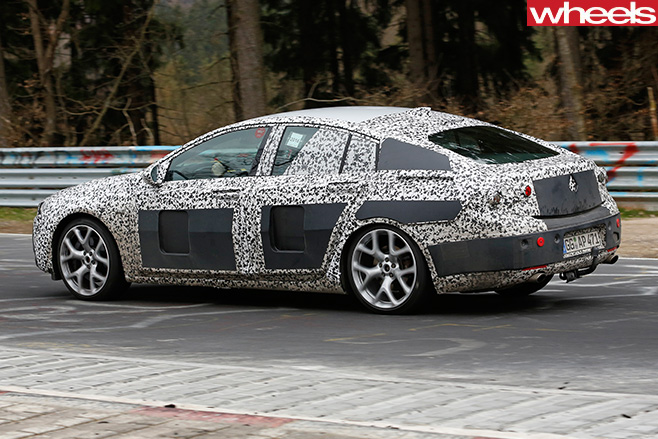 The 3.0-litre twin-turbo V6 is expected to closely mimic the 304kW drawn from the outgoing V8. Torque figures currently available for the engine show it will fall only slightly short of the V8’s 570Nm, at least before HSV weaves its magic.

But performance gains will come from an eight-speed automatic (a torque-converter unit, not a dual-clutch) adding another two ratios over the current Commodore.

Other models will be much lighter; the base Insignia for Europe – utilising the Astra’s 1.4-litre four-cylinder turbo – will weigh less than 1400kg.

The base engine for Australia is expected to be a 2.0-litre turbo four, producing about 170kW/350Nm. There will also be a naturally aspirated V6, likely the latest 3.6-litre, ensuring an affordable SV6 model.

This won’t be the first Commodore hatch. Holden first showed an all-paw hatchback in 2002 – the SSX concept, a VY Commodore-based liftback with a wider track, pumped guards and a clever rear sliding drawer. It again explored the hatch concept in 2004 with the TT36 (pictured), a mid-size five-door considered at the time a spiritual successor to the Torana, But which actually previewed the VE Commodore.

One thing that will remain a constant in Holden dealerships is the wagon.

Opel is readying a Sports Tourer version of the Insignia, giving Holden an entrant into the dwindling – but still strong – wagon segment.

To be unveiled in 2017, the new Commodore wagon will also spawn a mild SUV version along the lines of the Subaru Outback and Audi Allroad.

With a higher ride height and styling add-ons, the softroader wagon will supplement Holden’s expanding SUV line-up and aim to steal vital private buyers from the likes of Subaru and Mazda.

As for a name, one option is to revive the Adventra badge created in 2003 for the high-riding Commodore wagon that at the time was Holden’s rival to the Ford Territory.