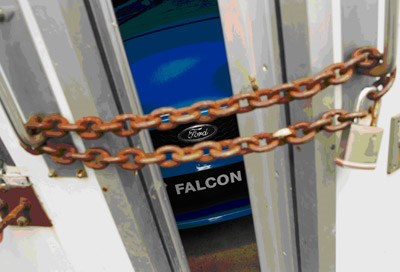 'Ford Australia will never again go it alone.' And so Ford Australia president Marin Burela confirmed that the FG will be the last Falcon designed, engineered and built exclusively for Australia.

The Falcon will live on, but not as we know it.

Under FoMoCo's 'One Ford' strategy - which is focussed on developing global platforms which are then tailored for different markets around the world - pouring hundreds of millions of dollars into developing a stand-alone Falcon for Australia "makes no sense", according to Burela. Instead, it's likely a single large-car platform will be developed and farmed out across the sprawling Blue Oval empire.

Speaking to Wheels in a snow-blanketed and arctic-cold Detroit, Ford's CEO Alan Mullaly echoed Burela's words. "Would we [build a car just for Australia]? No, I don't think so. [Car manufacturers] who make one vehicle - a different vehicle - for just one country, I think those days are gone, because you can't compete with the global companies."

So the question is: what becomes of Falcon? Burela confirmed the next all-new Falcon will surface in 2015 and that the nameplate will live on in Australia. The next-gen Falcon will also retain the current car's basic size and dimensions, but because the Falcon needs to integrate into the global Ford community, and potentially become just one variant built on a platform sold in several world markets, the DNA of the next Falcon is unclear. According to Ford, not even they know. But the glory days of rear-wheel drive are looking shaky.

"We have several options," said Burela. "The new car won't arrive until 2015 and we don't have to make a decision on Falcon until 2011. Do we go front-wheel drive, all-wheel drive or stick with rear drive? These are the questions we're asking and we're in the early stages of intensive market research into those questions. But let me say this: Ford Australia will have extensive input into whatever car is choosen and we will deliver the car that Australians want and need."

But RWD isn't off the table just yet. Alan Mullaly also outlined the possibility of twinning development of the next Falcon with Ford's rear drive muscle car: the Mustang. "You know, we've got some really good RWDs, too, like the Mustang. Can you imagine another new platform, just like the Falcon, that's going to be RWD for Mustang? So you can imagine driving One Ford we're going to have one of those, and there's no reason why we can't have it in Australia."

But uncertainty over Falcon's future also casts a shadow over the future of Ford Australia continuing to build cars in this country. Ford has done much to strengthen its position since 2008, having streamlined local production and purchasing and taking into account the additional volume that will be created by the four-cylinder Falcon and diesel-powered Territory in 2011. But despite Falcon's overall sales and market share actually growing during last year's GFC-savaged roller-coaster ride, there can be no guarantee that the next Falcon will be built in Australia.

It will require a huge investment from Ford HQ to re-tool Australian factories for the next-generation Falcon, and with a low-cost manufacturing base in Thailand available to FoMoCo, questions marks linger over Broadmeadows. Building around 55,000 cars last year, volumes for Ford Oz are low and Australia is a relatively high-cost manufacturing base. It must be proven that the Falcon can be built profitably and that Ford Australia itself can return to profitability. The company posted a $274 loss in 2008, although Burela is confident of returning to profitability within the next three years. Ultimately, however, the decision will be made in the boardrooms of Ford HQ in Detroit.

Burela, on the other hand, was quick to hose down speculation: "You're asking me to guarantee something that's five years away. Frankly, that's impossible, but the 'One Ford' strategy doesn't include any immediate plans to stop building cars in Australia. We invested $230 million into our local operations last year and we have the Ecoboost Falcon and diesel Territory coming on-stream in 2011 - does that sound like the actions of a company that's getting ready to turn off the lights?"