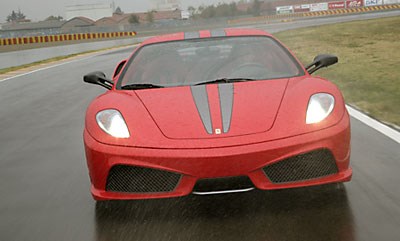 Ferrari's new 430 Scuderia spanks even the legendary Enzo around Fiorano. With ex-F1 driver Marc Gene at the wheel, we don't doubt that for even 60 milliseconds. Words and photos, John Lamm.

Humans don't event blink in 60 milliseconds. Yet here we are at Ferrari's Fiorano test track, popping upshifts as quickly as that in the new 430 Scuderia.

According to Ferrari, we're accelerating at a rate that will demolish 100 km/h from rest in under 3.6 seconds and with the traction control system we aren't wasting time spinning our wheels.

Can we please keep doing this all day?

Think of the 430 Scuderia in the same way the 360 Challenge Stradale was a super Modena 360. Ferrari began with the basic F430 and put it on a diet, down to 1250kg. It was a general weight-loss program, everything from big stuff to bits and pieces, but most obvious is the lavish use of carbonfibre. The engine bay is awash in it, from the compartment's walls to the V8's intake.

The interior is downright spartan, welds in view, carbonfibre as evident as the sweet-smelling leather in older Ferraris. Less welcoming, perhaps, but more invigorating. A new steering wheel manettino has five settings from street machine to racer.

You'll notice little changed outside the 430, though Ferrari says the downforce is greater front and rear with no increase in the coefficient of drag.

The 4.3-litre V8 has been urged up to 375kW, torque up a bit to 470Nm with a fatter upper curve. The 6-speed F1 gearbox is further developed to make those 60-millisecond shifts. And there has been fine-tuning of the traction control and "E" differential to make putting that power down still more controllable.

In fact, Ferrari says the 430 Scuderia is faster around Fiorano than the legendary Enzo ... and with its carbon ceramic brakes it probably stops as quickly.

Our first experience with the 430 Scuderia was on Fiorano, which is a smooth showplace of speed. It was raining during our session, but that doesn't much stifle the fun, thanks to the traction control and stability systems. We'll leave a hot lap in the wet around that circuit with the control systems off to the test driver, ex-F1 driver Marc Gene. Still you can bury the pedal and just keep snapping those upshifts on the paddles. The Ferrari howls out of each corner straight and true, and no matter how late you brake for the next corner you have the sense it could have been later. And, boy, does it sound good!

Given the state of modern exotic car development, none of this is all that surprising. But then we headed into the hills behind the factory in Maranello, up on narrow roads that aren't necessarily smooth and welcoming. We fiddled with the manettino a bit but quickly settled on full systems operational with the softer settings. Even on rough, heavily patched surfaces the Scuderia stays steady and well planted as you accelerate and brake through a set of gnarly hairpins.

But here was the biggest surprise. Click to the firmest setting and the pseudo-racer Ferrari doesn't become a buckboard.

A remarkable piece of machinery, this 430 Scuderia - just one of a set of only 1700 being made by the factory - and we suspect they're probably all spoken for. In fact, they deserve to have been snapped up in the blink of an eye... 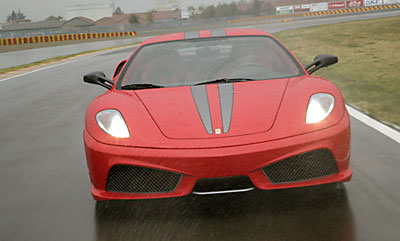 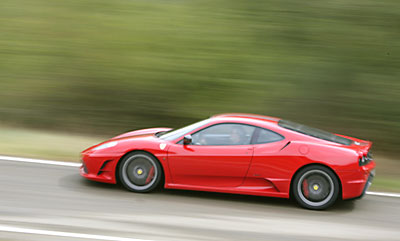 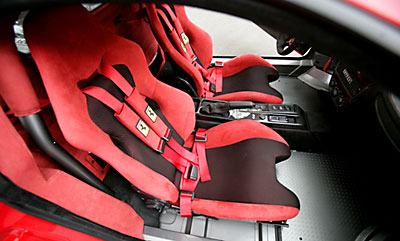 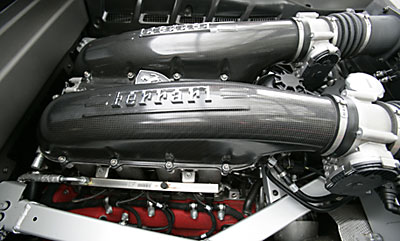