In 1985, Wheels stunned Australian readers – and the world – with in-depth scoop on the EA Falcon three years before its launch.

In 1985, Wheels stunned Australian readers – and the world – with in-depth scoop on the EA Falcon three years before its launch.

Forget the X cars; this new generation of slippery, modern Falcons is built to take on the world

THIS IS Ford's 1988 Falcon, the all-new, uniquely Australian design that will carry the fortunes of FoMoCo well into the next decade.

Ford Australia, flushed with the success of its big cars that helped push it to a record profit of $97 million in 1984, has been allowed to develop a complete range of locally conceived cars, destined not just for the Australian market, but for export to both the USA and Europe.

These photographs of EA 26, the code name for the new Falcon, come from inside Ford's design centre in Detroit and were first published in the news pages of the American magazine Car and Driver. Their significance for Australia is immeasurable because they are official Ford styling photographs of the car sent by Ford Australia, to the USA, for product clinics to establish how the Falcon will rate on the American scene.

The photographs prove conclusively that the next Falcon owes very little, even in its general styling theme, to the recently released European Ford Scorpio and the American Ford Taurus/Mercury Sable twins, which are cars of essentially the same size. It was these two models, from Ford's international line-up, which were finally rejected for Australia as being too advanced for our conservative buyers.

Hence the straight forward, three-box design for both the Falcon and the long wheelbase Fairlane/LTD/wagon variants. Not for Ford Australia the bolder fastback look but a smooth flanked wedge, that has a high, flat tail, aimed at correcting the appallingly bad drag co-efficient of the present Ford Falcon. With virtually flush side windows, very few exposed body joins and carefully integrated roofline and rear window (critical to a slippery shape) we understand the aim is to reach 0.30 cd.

EA 26 is shorter than the existing Falcon and very slightly narrower but it is still a big car by any standards. Our sources suggest that the basic floor pan, which has served the Falcon since the 1966 Ford Falcon XR, will be retained. They go further to say that there will be no shortening of the 2829 mm wheelbase, as was strongly rumoured last year, and claim that the Fairlane/L TD/wagon wheelbase of 2959 mm - one of the longest for any current production car in the world – will also continue.

Ford Australia's growing strength as a design source, within Ford internationally, is confirmed by the knowledge that it has almost certainly decided to continue the panel van and utility models, which were going to be dropped, by grafting the new nose and cabin onto the existing XF commercial bodies. Holden's decision to drop the WB ute and van, and Mazda's relatively poor showing in the commercial market, seems to have given the local models a reprieve.

Under that chic exterior the engineers have been hard at working to improve the new car's refinement, especially since it seems it will have to compete with European and American models. We understand the EA 26 has been designed to be built in both left and right hand drive forms and very few new cars can claim that distinction, at least outside the Japanese. 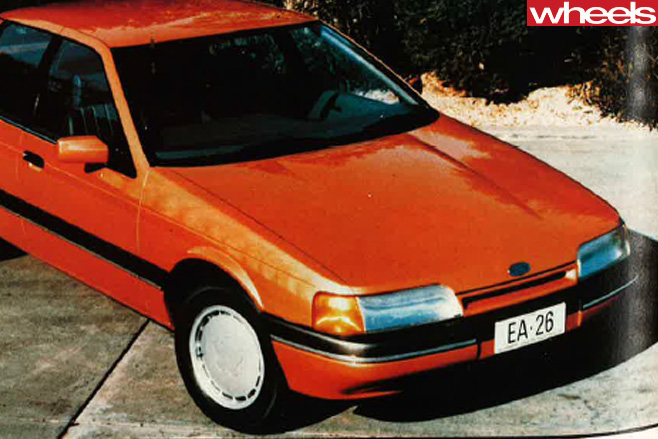 There will be a totally new front subframe for the MacPherson strut front suspension, and rack and pinion steering, probably power assisted even on the base model, will be used. Ford openly admits the turning circle will be reduced substantially on the new car. Independent rear suspension has been rejected according to our insider, because of problems associated with towing. But the wagons will drop the ancient old cart-style leaf springs at last and get a revised version of the sedan's coil sprung rear suspension. That's important for there is no wagon version of the Scorpio and a large, reasonably sophisticated wagon could be a real money spinner for Ford Australia on the export market.

What of the engines? Will they, too, be new and perhaps of V6 configuration? Once we believed so but our item last year about a single ohc conversion on the existing 3.3 and 4.1 litre straight sixes seems firm, although they will be touted as being all new. And a turbo option will surely have appeared by then to satisfy the demands for extra power that continue to come from dealers, more for the LTD buyer than the bloke who wants a so-called sporty Falcon.

This all-Australia new car (and its wasn’t so long ago that virtually all Australian motoring writers and industry observers  believed the XD Falcon would be the last truly Australian new car) invokes scepticism - maybe tinged with jealousy - among the executives of the four other local car makers who would love to be able to do their own thing. Fearful of another energy crisis and petrol rocketing to 75 cents a litre, they wonder if such a massive investment can be justified. Ford, of course, believes it would be stupid to turn its back on such a successful formula and when one considers the huge profits it has made out of the Fairlane/L TD (which are essentially longer Falcons selling for twice the price) who can argue with that?

Ultimately, however, it may be that exports are the key to the huge gamble Ford has undertaken.

Now that Ford has gone public and admitted the next all-new Falcon will be a uniquely Australian design, something WHEELS readers have known for almost a year, of course, the countdown has begun. Bill Dix managing director of Ford Australia, has told us the project is going to cost $330 million and will produce "a car that will be   Australian in design, concept and manufacture. This new vehicle, " he says, "and its derivatives will be designed to provide Australian motorists with the quality, durability, performance and interior package size they have come to expect from Falcon."

Then he goes on, and this is perhaps the most interesting bit, to say: "We will be actively seeking export markets with this vehicle and we believe we will have a world class product with which to achieve that goal." Yet the Falcon - note that the X code names have been dropped - which has already been the subject of research clinics both in America and Europe, will be very little bigger than either the Scorpio, which is rear drive, or the Taurus, which has front drive.

It wasn’t so long ago that virtually all Australian motoring writers and Industry observers believed the XD Falcon would be the last truly Australian new car invokes scepticism - maybe tinged with jealousy - among the executives of the four other local car makers who would love to be able to do their own thing. Fearful of another energy crisis and petrol rocketing to 75 cents a litre, they wonder if such a massive investment can be justified. Ford, of course, believes it would be stupid to turn its back on such a successful formula and when one considers the huge profits it has made out of the Fairlane/L TD (which are essentially longer Falcons selling for twice the price) who can argue with that?

Why, the bosses in Detroit must have asked, do we need to develop three totally different cars of such a similar size for the world markets, especially when demand for truly big cars is slowly but surely in decline?

Clearly, Ford Australia has been able to convince the bean-counters that there is money to be made with a big car in Australia and on the export markets, where they see the Falcon coming in above the Sable and Scorpio, and the LTD as a truly big car for the USA where it is expected to be a big volume seller by local standards.

Finally, the EA 26 Falcon won't appear in 1987, as forecast for so long, but in early 1988 probably at the Melbourne motor show. Can we expect to see a facelifted version of the XF?