Sliding into the broad, accommodating seats of the entry-level Ford FG-X Falcon – which drops the XT badge and is now just plain old ‘Falcon’ – is an exercise in familiarity.

While the outside has been refreshed (new front end, bootlid, lights, bumpers and wheels), the interior is barely tweaked. The expansive dark grey dash is unchanged, as is the plasticky steering wheel that rams home the feeling you’re driving the one aimed at governments and fleets.

That level of drabness flows through the cabin, like the undamped overhead grab handles that date back to the 1998 AU. And, while the FG-X gets a reversing camera, parking sensors at each end and a colour touchscreen, the base Falcon is the only one in the range that doesn’t get sat-nav.

However, Ford’s new SYNC2 infotainment system brings a clearer colour screen and added functionality, and a much-hyped ability for it to directly call emergency services is a win if you have a big crash. The 8.0-inch colour touchscreen breaks into four quadrants for phone, navigation, audio and ventilation, but most are accessed by separate buttons below the screen, and that’s generally quicker and easier.

Voice operation is more of a party trick for all but the phone operation (or sat-nav on models that have it), where it proves usefully handy.

On the road, the Ford Falcon is as comfortable as ever. Adopting the G6E suspension for the base FG-X, it is compliant and supple, disposing of country thumps with ease.

Revised anti-roll bars have improved the EcoLPi’s turn-in, though claims of better rear grip were difficult to assess during our rain-sodden drive.

The suspension compresses heavily over big bumps, but body control is good and balance as impressive as ever. The hydraulic steering is too light at lower speeds, but it points faithfully and there’s no kickback. 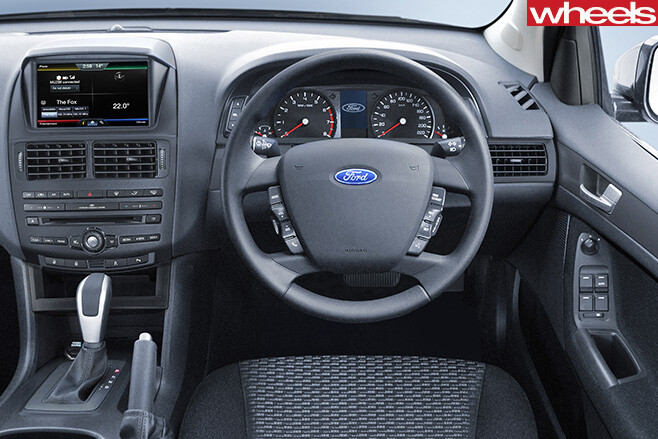 Despite numerous efficiency improvements, the 4.0-litre in-line six is still thirsty. The lazy, torque-heavy bottom end of the LPG engine means you can mostly keep revs below 3500rpm. Above that, response is brisk and performance is rewarding.

The EcoLPi is refined and works beautifully with the latest ZF six-speed auto. The only indication this is the LPG model is the slight hesitation before cranking over when you turn the key.

However, there’s a good chance the fleets that once flocked to the base Falcon won’t take much notice of the improvements, and private buyers won’t appreciate the drab interior, instead jumping up to the sportier-looking Ford Falcon XR6.

THE four-cylinder turbo-petrol Falcon EcoBoost is the most fuel efficient large rear-drive volume seller on the market, with consumption down to 8.0L/100km. But the regular six-cylinder petrol Falcon has had the biggest economy improvement, down nine percent to 9.0L/100km.

The new styling reduces the coefficient of drag from 0.31 to 0.29, and other aids include low-friction tyres, an underbody aerodynamic tray (previously on the EcoBoost only), a 10kg-lighter transmission with less internal inertia, and the torque converter from the EcoBoost, which allows lock-up at lower revs.