With a nod to Ford’s glorious past, FPV has kept its best for last.

With a nod to Ford’s glorious past, FPV has kept its best for last.

F  IS A LETTER no one wants to see on their report card. And it’s definitely something Blue Oval fans didn’t want to see on a Ford Falcon. Especially when F stands for Final – the last-ever high-performance Australian Ford, and the final car to wear a Ford Performance Vehicles logo. So it’s with mixed emotions that we introduce to you the last car, and the best, ever produced by FPV – the GT-F 351.

On the surface, it seems like no coincidence that those three iconic digits – 351 – have reappeared on the farewell FPV. The Falcon nameplate was at its zenith when Ford’s flagship V8 grew to 351 cubic inches (5.8 litres) in 1969, before reaching legend status a couple of years later in the homologation-special Ford XY Falcon GT-HO Phase III. But, four decades of metrification later, 351 now stands for kilowatts, which, for those who still mentally measure an engine’s muscle in ponies, is 471 horsepower.

What seems like an ‘engineered’ power figure, though, is actually the first number the GT-F’s supercharged 5.0-litre V8 showed on Ford’s dyno. 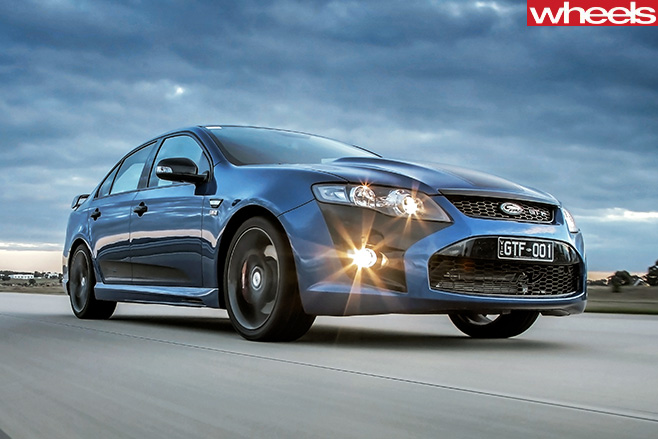 Fitted with the latest-generation Bosch 9.0 engine control unit (replacing Version 8.1 used since 2010), the engine was put through a hush-hush pre-program scope to determine the impact of the power upgrade on its emissions performance, ABS, traction-control and launch-control systems.

“This engine has a whole bunch of headroom”, says Bernie Quinn, engineering director of Prodrive, referring to the blown ‘Miami’ V8 he played a large part in developing in 2010. Quinn knows the Australian-fettled, Geelong-assembled 5.0-litre quad-cam V8 as well as anybody, and has achieved the GT-F’s iconic power figure without any hardware alterations whatsoever. It’s all in the new ECU.

At its core, the 5.0-litre V8 is an extremely efficient engine, with low intake losses and very low exhaust back pressure, but Quinn says that, with the software technology available to FPV back in 2010, its conservative 335kW was “as much as we could put into it without tearing the car apart”. 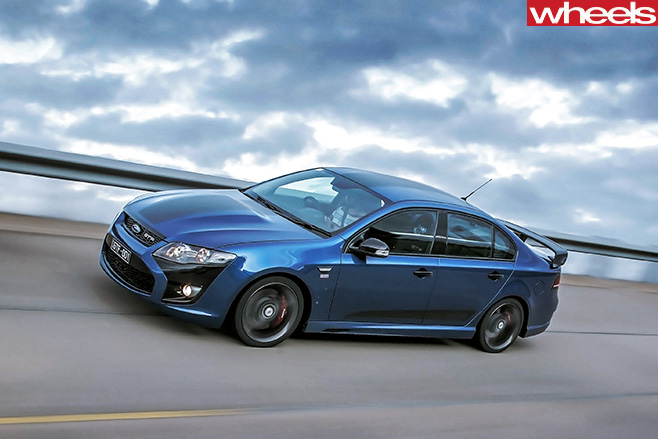 Four years of software development later, the FPV GT-F is a different beast – faster, yet much more driveable. The new ECU’s brain allowed extra lines of code to be written for a more sophisticated engine and ESC calibration. Instead of a “reactive” system where the stability and traction control activate once they detect slippage (which was often in the 335kW FPV), the Version 9.0 ECU takes a “proactive” approach that predicts wheelspin and aims to prevent the disruption of driving flow.

Measured according to the most stringent power/torque certification in the world – the ECE system – the GT-F’s supercharged 5.0-litre puts out 351kW at 6000rpm and 570Nm from 2500-5500rpm, whether at sea level in the Northern Territory or at the top of Mt Kosciuszko. But there’s a degree of overboost lurking in the background that, when prevailing conditions are favourable, can bolster both those outputs by “about 15 percent”. No one at Ford or Prodrive was willing to name an exact number, but do the maths and you’re looking at more than 400kW and 650Nm!

Extracting performance times from a standard 335kW FPV was something we looked forward to about as much as a digital prostate check. Didn’t matter how prepared or relaxed you were, it was gonna be painful, or messy, or both. But not the GT-F. Its fat 275/30R19 Dunlop SP Sport Maxx rear boots – part of its R-Spec suspension package – add a big boost to off-the-line and cornering grip. Launch control plays its part, too. 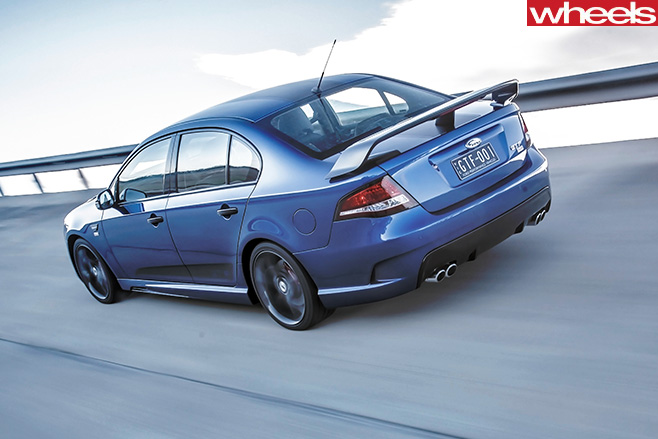 In the auto, you simply put the shifter into Drive Sport, leave ESC on and step briskly from the brake to a buried throttle. On a perfect run, there’s barely any ESC intrusion as the GT-F lifts its nose and hauls hard to 100km/h, and continues its charge right to the top end of third gear, close to 200km/h.

How quick? In 17-degree weather on a concrete surface at Ford’s proving ground, the GT-F auto snatched triple digits in 4.68sec, backed by a subtle blurting from its exhaust pipes as the ZF auto upshifted with rapid-fire slickness. 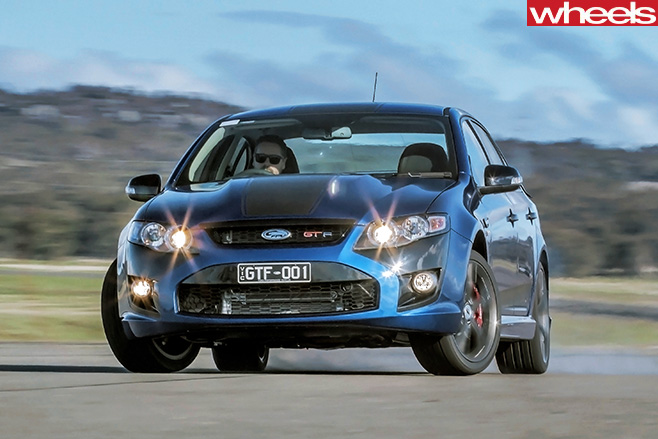 And the six-speed manual version, running the tough-but-positive Tremec TR6060 ’box with the Mustang GT500’s twin-plate clutch, isn’t too far behind. Depress its left pedal, flatten the throttle, watch the revs settle at about 3700rpm, then quickly ease the clutch out and the manual GT-F deploys its fat rubber and launch-control smarts to accelerate hard.

While the auto remains the drag-strip maestro, the manual’s no slouch. The best of three quick runs produced 4.94sec to 100km/h and a 13.09sec standing 400m at 185.4km/h. Given familiarity with the Tremec’s gearshift, you could easily pick up a tenth or two.

Ford’s product planners were caught off-guard by the 351kW GT-F’s enthusiast focus, with far more buyers expressing interest in the manual than anyone anticipated. Impressive as the ZF auto is, the manual would be our choice, too. It’s a great match to the GT-F’s muscular personality. 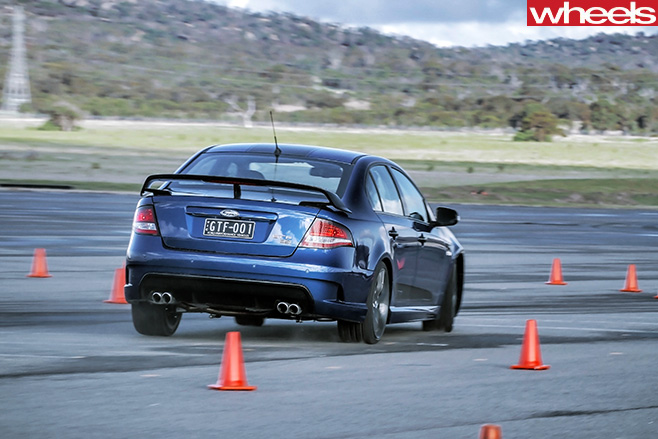 This is far from a computer-tickle-and-decals special. The small but passionate teams at Ford and Prodrive wanted the swansong FG Falcon to be something iconic, not just cosmetics and marketing waffle, and as a result, the GT-F boasts the best hardware available from the FG FPV series. 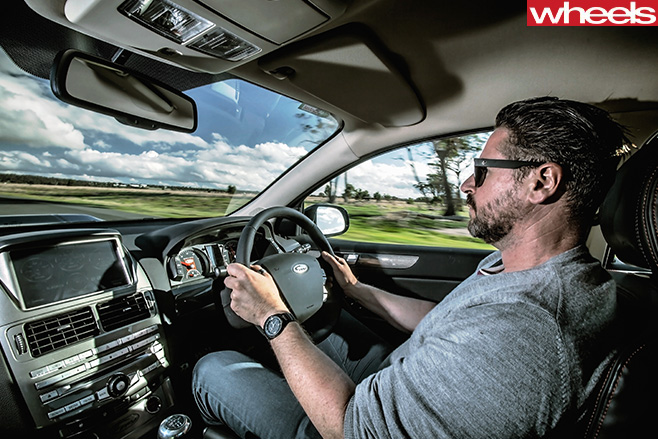 Uniquely, the GT-F gets adjustable rear camber bolts to satisfy track-day fanatics, though few buyers are likely to extend their last-of-the-line FPV on a racetrack. That would be a shame because the GT-F is unequivocally the best-handling car FPV has produced.

Thanks to the nuances of the new Bosch 9.0 ECU in adjusting power and torque parameters, the GT-F can use more of the available grunt when the car is capable of using it. Combined with the R-Spec suspension package, which moves the chassis’ roll centre from roughly where the driver sits to down near the rear suspension, the GT-F feels far more stable, progressive and comfortably controllable than any non-R-Spec supercharged FG.

Turn-in is as quick as it’s ever been in an FG FPV, and the GT-F has the tyre grip and the chassis poise to maintain the directional change promised by its front end. Leaning on its outside rear Dunlop, the GT-F enables progressive balance adjustments via the throttle, yet its dynamic threshold is far beyond the constant oversteer minimisation that was the first supercharged FPV. 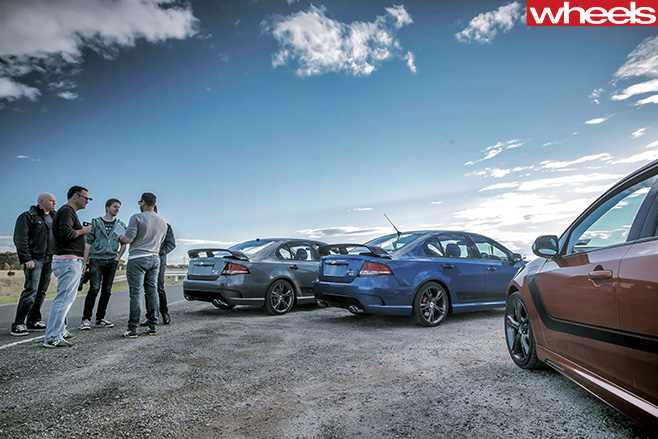 It still loves to drift, though. Tracing a tight, witches-hatted circuit set up by the engineers to explore the GT-F’s on-limit handling, it effortlessly transitions from opposite-lock left to opposite-lock right, linking the circuit with far greater ease than you’d expect of a 351kW-plus Falcon. Even the tyres withstand the test, with plenty of rubber left on the rear boots, despite much disappearing into the overcast atmosphere as smoke.

Yet for all the GT-F’s cornering and drifting bravado, it still manages to ride well. Over a 20km loop outside Ford’s You Yangs proving ground, I was surprised at how composed and cohesive the GT-F felt over broken tarmac. It wasn’t the over-stiff sled I expected.

The final and probably most important surprise, though, is the GT-F’s styling. At its core, this circa-2008 Falcon offered little scope for a wholesale refresh, yet design manager Nick Eterovic and his team have done a brilliant job making the most of what they had to work with. 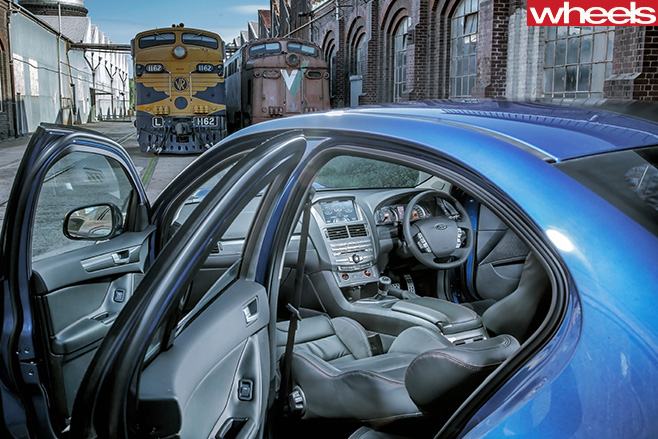 Focus RS-style gloss-black mirrors set the tone for the rest of the GT-F’s blacked-out styling package – gloss-black ‘raccoon eyes’, full black upper grille, black-bezel headlights and tail-lights, black door handles, a big gloss-black rear spoiler, and a gloss-black diffuser. Then there’s the stripe package, which the designers used to enhance the Falcon’s shape, rather than fight against it like some previous striping designs. The outcome is restrained, but cool. As Eterovic pointed out: “When you start to see dual stripes on a Suzuki Swift, you know it’s time to move on … To me, it was much more muscle car to add black elements.”

So the GT-F gets a wide, matte-black over-body stripe – reminiscent of the anti-reflective matte-black bonnets of 1960s and ’70s race cars – flanked by a thinner pair of stripes, and matte-black inserts into the scallops in the lower doors. Familiar as the Falcon shape may be, the GT-F’s look is tough and recognisably different. 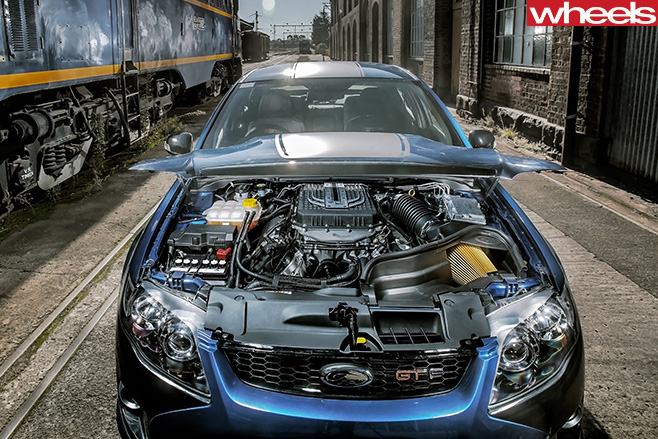 Inside is less special, though the instrument dials with orange-striped faces and 351 logos are new, as is the large centre touchscreen’s triumvirate of gauges and the GT-F intro screen with build number. There’s a molten-metal finish on the centre console and plenty of orange stitching throughout, though, disappointingly, the GT-F gets regular GT front seats, not the GT-P’s superb winged buckets. The lesser seats are still comfortable, but they’re not quite as special and only have limited electric adjustment for the driver.

Still, if it wasn’t for the passion of the engineers, designers and program managers championing the GT-F, it would never have turned out the way it did. They really wanted to do the nameplate justice.

It was a labour of love, born out of the enormous affection for performance Fords in this country, and behind the scenes at Broadmeadows. As GT-F project manager Justin Capicchiano points out, it’s an emotional car for Blue Oval fans and also the guys working on it. “People would come up to you in the hallways at work and say ‘you’ve got to do a good one, you’ve got to make it special’.” And they have.