It all began with a poster of Allan Moffat’s emphatic Hardie Ferodo 500 victory in 1971. By the time the yellowed Sellotape crumbled, a ghosted outline remained etched on the wall

IT ALL began with a poster of Allan Moffat’s emphatic Hardie Ferodo 500 victory in 1971. The striking black-and-white image of the Canadian driver’s muscular XY Falcon GT-HO Phase III thundering across the finish line at Bathurst stayed fixed to my wall for so long that, by the time the yellowed Sellotape crumbled, a ghosted outline remained etched on the wall.

That victory and others like it helped enshrine the homologation-special Phase III GT-HO in the psyche of many local performance car fans, me included, as the high water mark of Aussie muscle-car development. It wasn’t, of course. There have since been many cars faster and more sophisticated, but the ‘Ho-ey’ wrote its own legend, securing a place in our motoring culture that nothing will ever surpass.

With only 300 built, at least a third of which have gone to the great wrecking yard in the sky, the Phase III was already a near-mythical creature by the time my journalistic career steered me to the helm of Motor in the late 90s.

The beast continued to evade me for another 20 years, including a near decade-long stint at Wheels, but today, 46 years after Moffat’s famous Bathurst victory, I’m heading to Broadford to finally drive this giant of Aussie automotive folklore.

To get into character, I’ve reread Mel Nichols’ seminal HO Down the Hume about driving the Phase III off-the-clock at 145mph on the Hume Highway.

As I approach ‘my’ striking Yellow Glow Phase III, the irony isn’t lost on me that Broadford is just a few kilometres from where Nichols would have streaked past all those years ago in his yellow missile, the mighty Cleveland V8 hitting its 6150rpm electric rev limiter in top gear. Nichols called it “the fastest, most awesome car Australia had ever produced”, and I can scarcely believe that the planets have finally aligned to make my Bucket List wish a reality.

I drop down into the softly sprung buckets, pausing for a moment to take it all in, inhaling deeply the heady mix of petrol, vinyl and patina. The interior is basic period-spec Falcon, the only obvious embellishments being the Mustang steering wheel with faux-wood rim, a GT-HO logo on the dashboard and a 351 High Performance badge on the centre console. But look closer and there are clues to the Phase III’s serious intent in the 8000rpm tacho, 140mph speedo, manual choke and trio of temp, oil and fuel gauges.

The belts are lap-sash but there’s no inertia reel and virtually no side bolsters in the seats, so I snick the belt tight before turning the key. The starter churns the 351 Cleveland into life and the signature Shaker air scoop rocks sideways as the iron beast awakes with a snarl. The note, described by Nichols as “a thunderclap of exhaust”, still gets your attention. The noise is strong, clean and potent, rising in intensity as I prod the throttle, the twin exhausts punching fat holes in the still morning air, the Shaker trembling as the Holley beneath it greedily gulps fuel.

It’s still a serious piece of kit, but easing out the hefty twin-plate clutch, I immediately sense the lightness of the steering, directed via the overly large and thin-rimmed wheel. Out onto the straight and into the loud pedal and – whoa! – the rear squats, the nose lifts and the GT-HO surges forward with attention-grabbing urgency, the V8 bellowing like a wounded bull elephant.

The powerful surge consumes gears as quickly as I can feed them in via the skinny floor-shift, my eyes and ears on the rev limiter. At the end of the straight, I’m onto the brakes, hard at first, then harder and... Bloody hell! The thing doesn’t want to stop. Or turn. The yellow beast’s nose points resolutely towards the outside of the bend as I saw on the unassisted wheel, standing harder again on the brakes before eventually muscling it through. Phew.

“It’s like driving a thug,” owner David Frake laughs afterwards as we recall my laps, the physicality of muscling it through bends, the powerful acceleration as it lays back its ears on the straights, the epic old-school V8 soundtrack that makes you like you’re travelling three times faster than you really are.

What was it like? Fabulous. Flawed. And frankly just as Nichols had so eloquently described it all those years ago. It really is a legend of a machine.

“YOU actually had to drive these cars. Nowadays the car drives you.” That’s the frank assessment of David Frake, the lucky 57-year-old owner of this handsome GT-HO Phase III.

As proprietor of Melbourne-based GT Ford Performance, it’s fair to say this bloke bleeds blue, his business specialising in parts for fast Falcons from the ’67 XR GT to the ’76 XC Cobra. David’s love affair with V8 Falcons started when he was 20.

Plated October 1971, this car was delivered new in NSW. David picked it up 25 years ago as only the third owner and worked on it for a year before selling it, only to buy it back three years later. He stripped it and sent it to a panel shop for what he thought would be a relatively quick tidy-up; it was there more than seven years.

David’s incredibly blase about his HO. He clearly loves it, but he also drives it regularly, has had it on the track, and handed the keys over to me with the instructions to simply “get up it”.

“I just drive the thing in my way and will probably leave it to someone in my will,” he says. That’s some inheritance, given David’s twice been offered the staggering sum of $1m for the car. 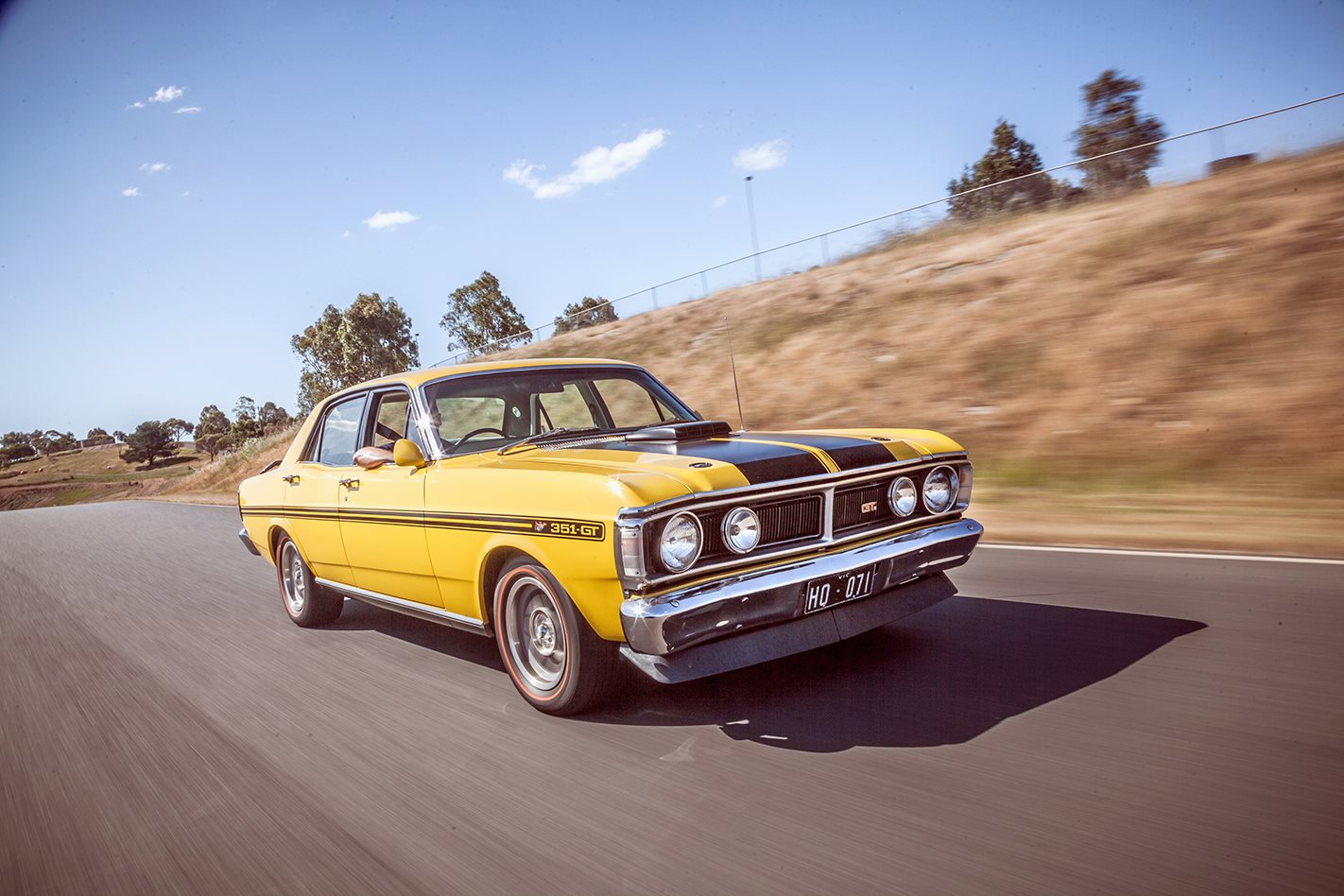 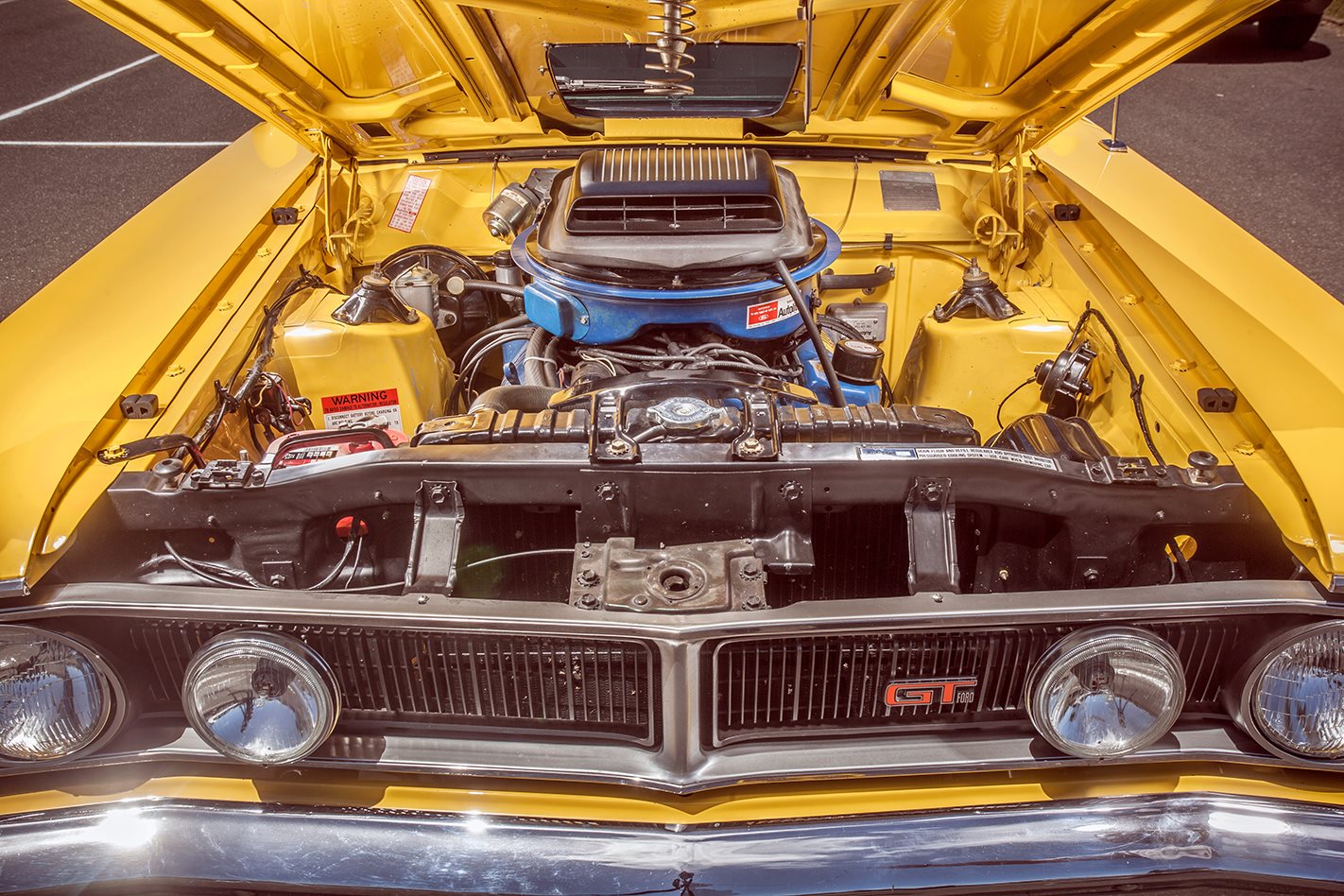 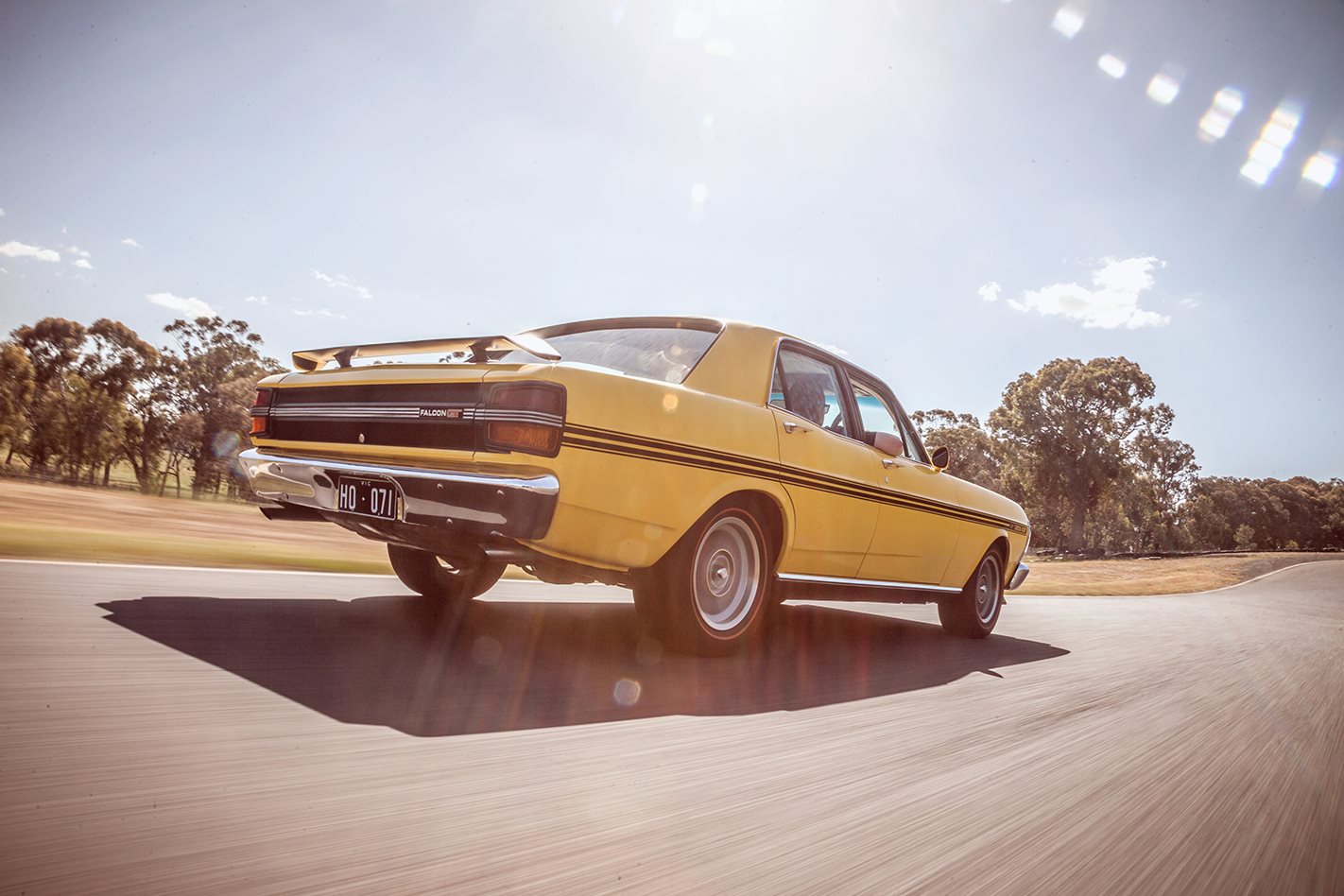 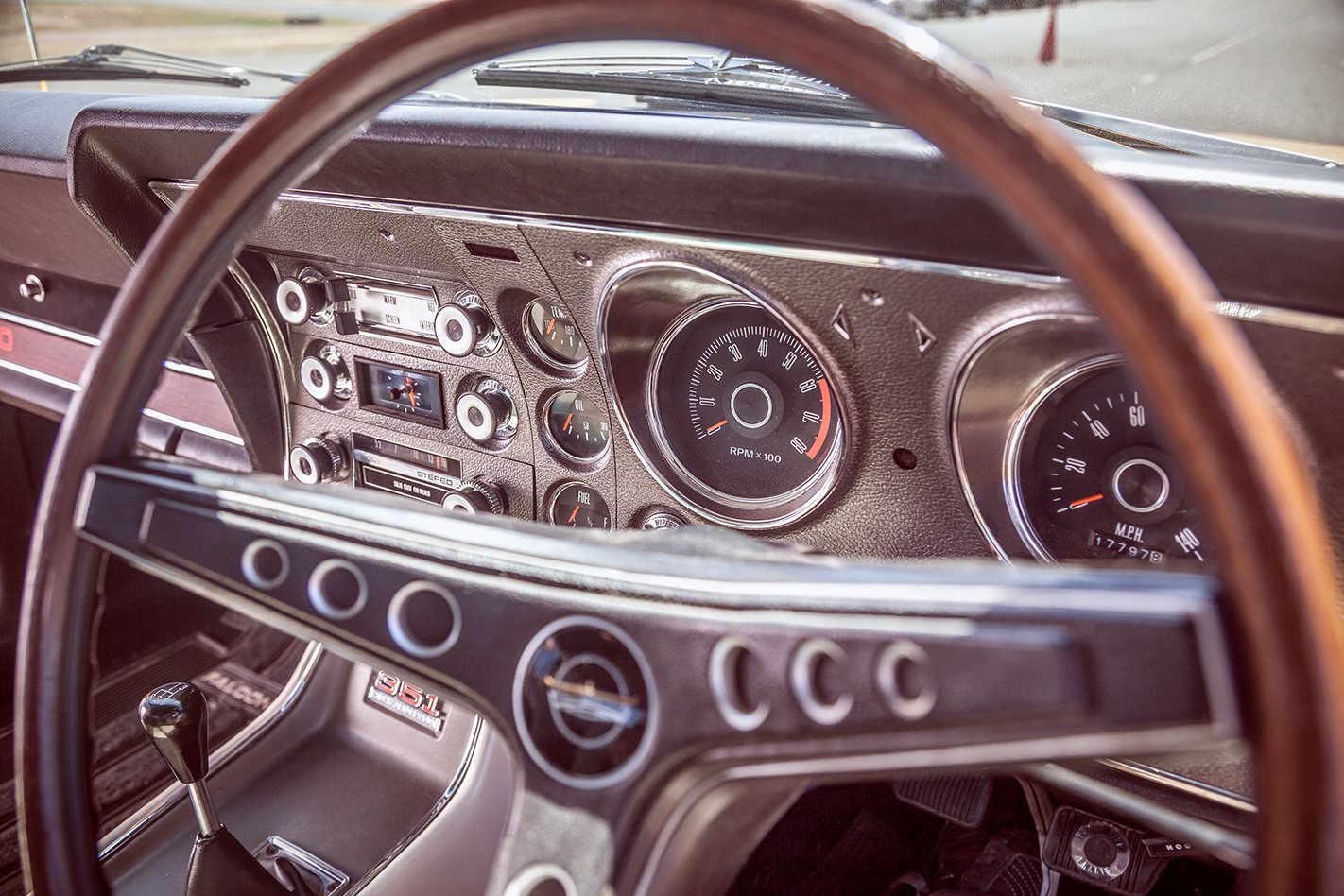 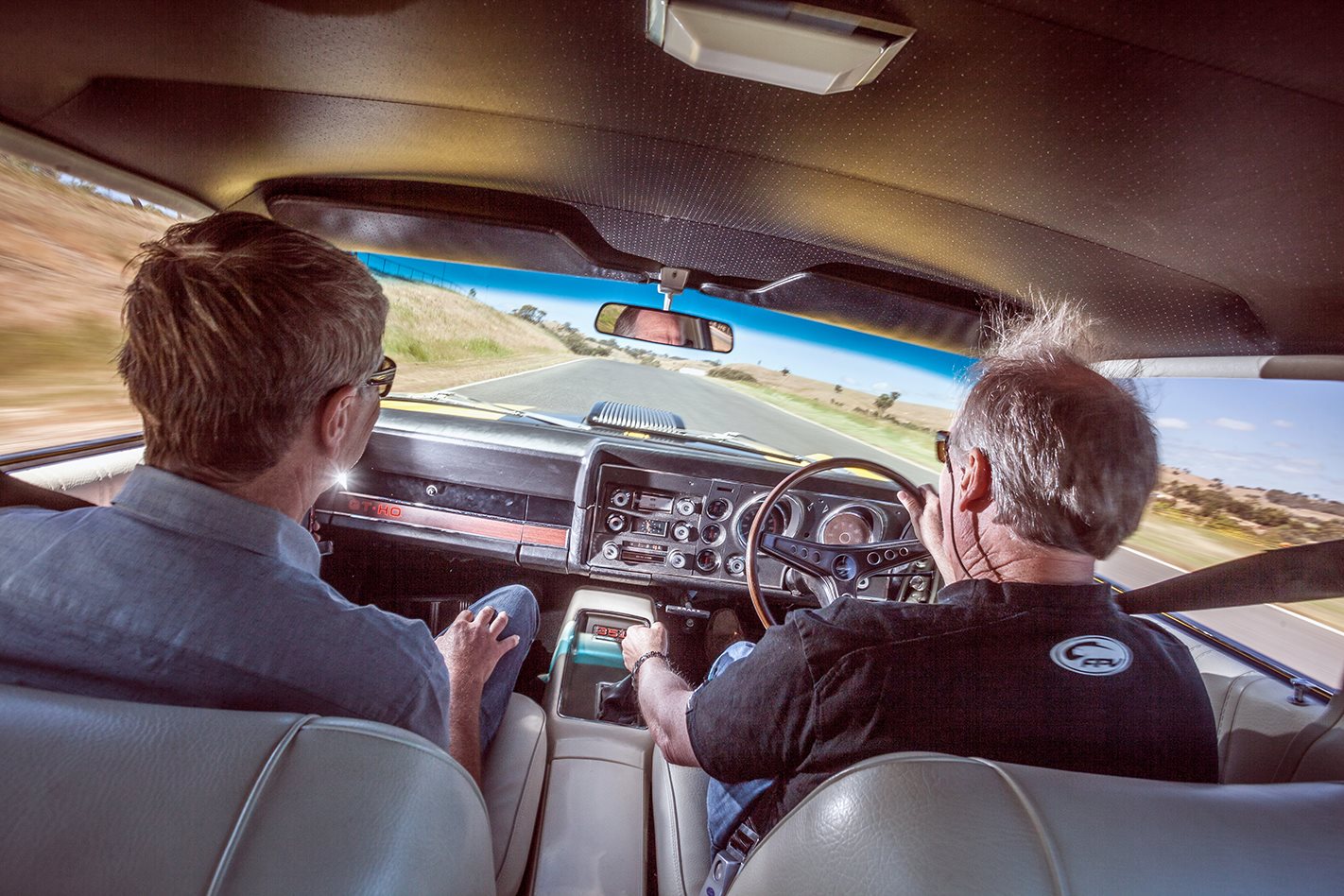 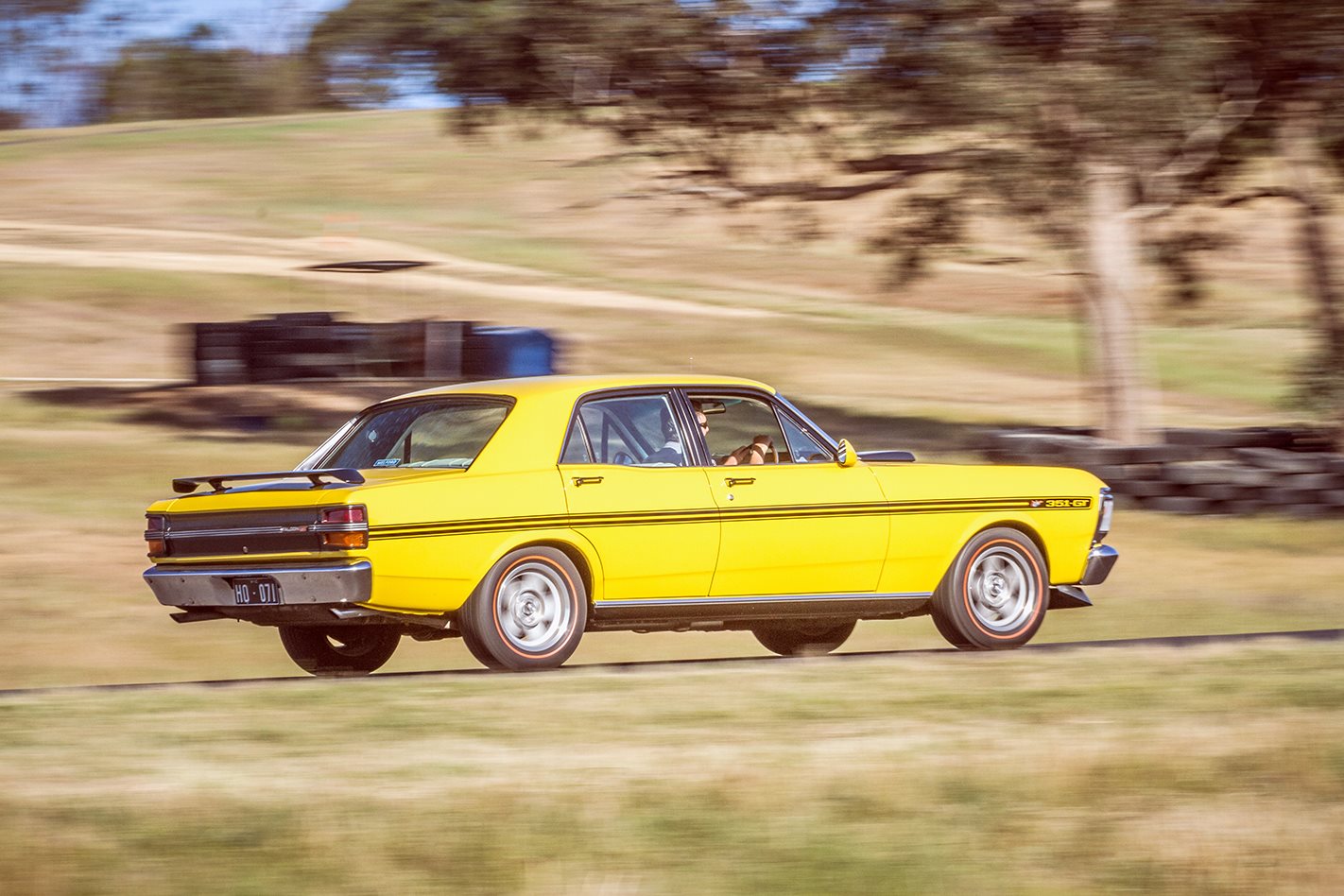