Could the toughest six-cylinder ’70s muscle car teach the Falcon FG XR6 and Commodore SV6 a trick or two?

Ron Stephenson floors the throttle of his ‘Hot Mustard’ Charger R/T E38 and with a crackling, braying snarl it belts off down the Murray River Road. Peter McKay is after him in the Commodore SV6, while I’m left spinning rear wheels in the Falcon XR6.

Damn, that Charger has some grunt! The E38 is nearly 40 years old; this particular example is the second one ever built, and Ron recently knocked back $200,000 for it. But that’s not going to stop him giving his gorgeous car a good thrashing.

We close up as the corner approaches where photographer Brunelli is waiting for a line-astern convoy shot. It’s immediately obvious that there’ll be no holding back as far as Ron’s concerned… He’s cranking the Charger in, wheels splayed, body rolling, rear-end wiggling. The pace is on. 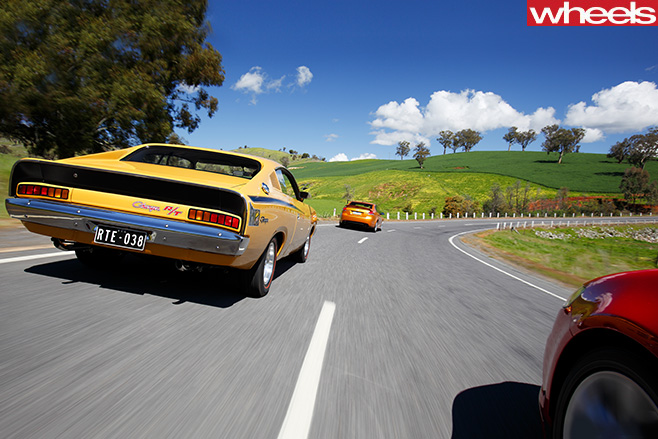 Indeed, when the E38 appeared as part of the original VH Charger range back in 1971, the performance the Aussie Chrysler engineers managed to extract from its overhead-valve in-line 4.3-litre six seemed the result of sorcery.

Fed by three Weber side-draught, twin-throat carbies, the Hemi six-pack punched out a heady 210kW and 431Nm. The car ran 0-100km/h in 6.4sec and 0-400m in 15sec. The following year the four-speed R/T E49 went even faster, and for two decades nothing else built in Australia could beat it.

And the E38’s outputs still embarrass the best naturally-aspirated hot-six efforts from Ford and Holden. Only the MY10 Commodore’s new LLT direct-injection High Feature V6 can match it, and even then only for power, not torque. 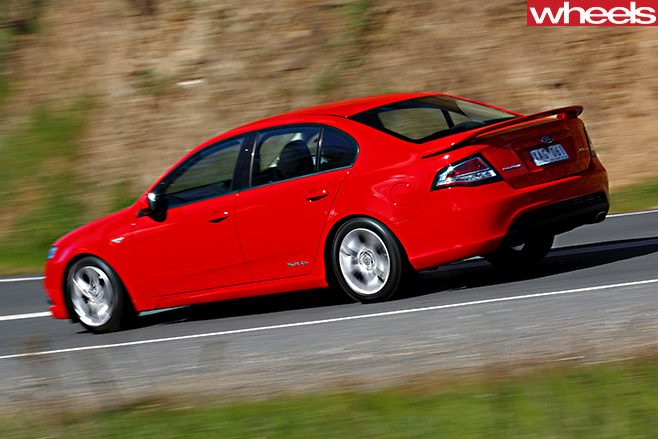 Even so, the E38 is not here to slug it out toe-to-toe with the latest FG XR6 and VE SV6. Not with a four-speed gearbox versus six-speed autos; torsion bar front- and leaf-spring rear suspension versus sophisticated multi-links; unassisted recirculating ball steering versus forward-mounted rack and pinion; and unservoed disc/drum brakes versus powered discs all-round in concert with ABS and electronic stability control.

Instead, think of the E38 as the Old Bull, watching from on-high as the young up-and-comers go head-to-head. Its position in the pantheon cannot be challenged. What we want to know is whether spirit and can fire our emotions in anything like the same way.

So Ron, a 57-year-young plumber has made the trek up the Hume from Melbourne in his beautifully restored E38. The XR6 has also come north, while McKay has liberated the SV6 from Holden’s Sydney press test fleet and made the trip south. Our meeting place is Albury, just north of the NSW/Vic border, from where blacktop runs in an enticing tangle eastwards, and where McKay once raced. 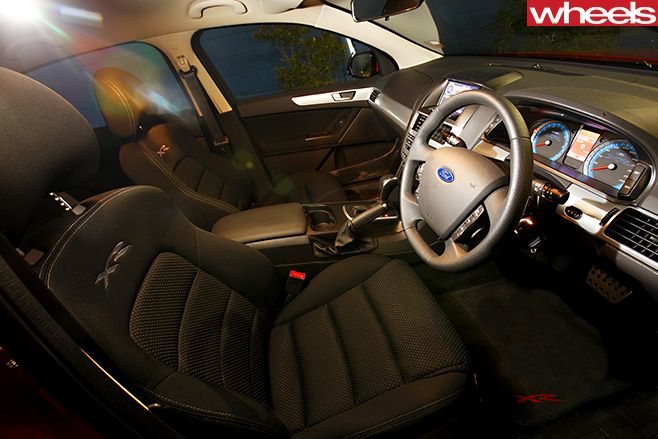 But first the XR6 and SV6 face a preliminary battle on Tumut Airport’s 1060-metre stretch of bitumen. It’s here, near the foothills of the Snowies, that we get to find out if the key feature of Holden’s MY10 update – the SIDI (Spark Ignition Direct Injection) engine – lives up to the hype, with a kilowatt count that climbs to 210kW and torque peak that rises 10Nm to 350Nm.

Previously, the SV6 has been the XR’s bunny in a straight line. But it’s now pushed 15kW ahead of the Falcon’s 4.0-litre in-line six and narrowed the torque gap, albeit to a still substantial 41Nm. 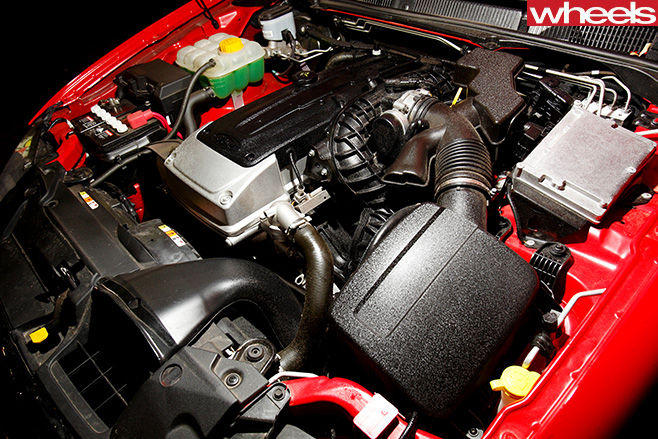 As rain clouds sweep up the valley, the Falcon sets the benchmark time. Hooking up sweetly on the damp but still grippy surface with ESP on or off, it crosses the 100km/h marker in 7.2sec and continues to build a head of steam, covering 400m in 15.2sec.

These are the best times Wheels has extracted from an FG XR6 by several tenths, so it’s a good ’un. And a familiar experience too, the big engine sounding a tad harsh as it approaches its 6100rpm cut-out, yet staying smooth and slurring into the next gear.

Meanwhile, Holden’s new six feels friskier, lighter, sexier. It revs harder than the Falcon engine, as the HF engine always has, cutting off at a heady 6750rpm. The hoarseness of old is gone, replaced by a soundtrack from the new induction and dual exhausts so well orchestrated you wish it was louder. 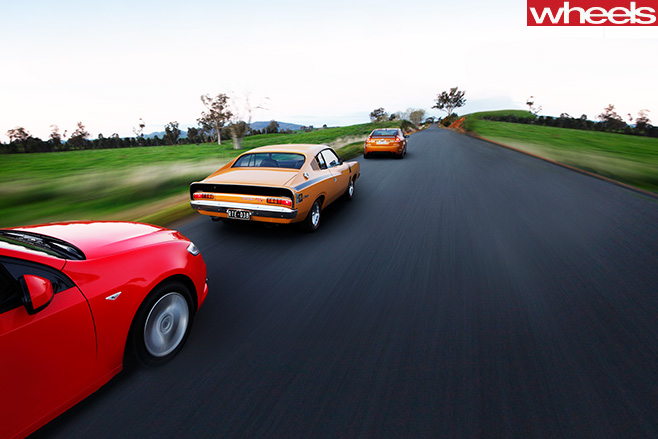 Compared with the old HF, it feels like the anchor has been cut off. Yet it still can’t quite catch the Falcon, clocking a 7.4 and 15.4. It’s still substantial progress considering the VE SV6 ran an 8.1 and 15.8 when we first road-tested it in late 2006.

Our car was hindered by a slight throttle dead-spot which didn’t help its standing starts, but that wasn’t an issue in the rolling 80-120km/h test and helps explain why the Holden was faster.

So while DI can’t quite get the SV6 on terms in a straight line, there’s no arguing it gives it an economy advantage. Holden claims a 10 percent cut to 10.1L/100km, lining it up directly against the ZF-equipped XR.

After more than 1000km it actually undercut that figure, logging an exceptional 9.4L/100km, a clear litre more frugal than the Falcon. There’s a rider in that figure because the Holden did slightly more freeway running than the XR6, and with a lighter load onboard. 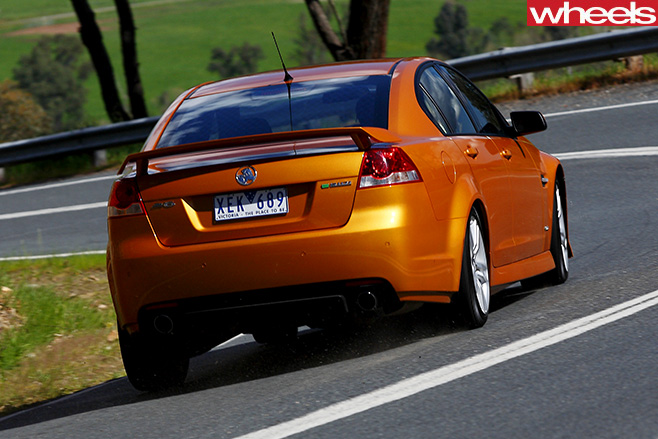 However, after our day of Murray River Valley exploration, the two cars’ figures could be compared without equivocation, and the Commodore was still clearly ahead; 11.1L/100km to 12.0L/100km.

But it’s the only clear advantage emerging as the day progresses. We proceed at a brisk pace, a bright collection rolling on blacktop that wends its way through a blazingly green landscape dotted with full dams and weatherboard farmhouses.

Regularly, McKay and I swap between the Falcon and Commodore and each time we compare notes and agree just how closely these two align. Both are fast, brilliantly damped, invigorating, involving, inspiring. 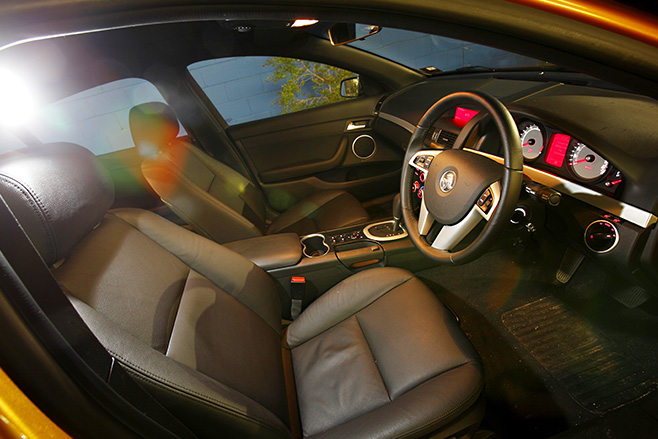 We nitpick. The Commodore revs harder, is quieter and a touch more compliant in the rear end. We’re sure changes, including replacement of a rubber bush in the rear lower control arm with a ball joint, larger rear anti-roll bar, and new-spec Yokohamas have brought incremental improvements to comfort, handling and steering.

But the Falcon still has fractionally better body control, slightly crisper steering, a better meshed drivetrain (the Holden’s new six-speed is prone to hyperactivity on varying throttle and inclines), and better brake feel and power.

Move away from the drive experience and still the pros and cons balance out.

The Falcon is cheaper until you option the ZF; the Commodore gets side curtain airbags standard; the Falcon looks classier inside; the Commodore’s duller presentation is more legible; the Falcon’s front seat is better bolstered but sits too high; the Falcon’s boot is bigger but the Commodore’s is better-shaped. Looks? The updated VE remains familiar because the only external changes are new SIDI and Ecoline badges. The FG is newer yet also familiar, an elegant, chiselled evolution of what went before. And so it goes. 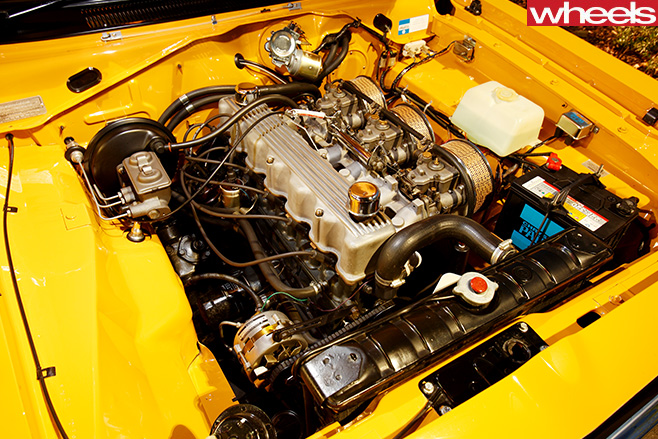 An offer from Ron to let us steer the Charger provides a circuit breaker. It’s a curious amalgam of experiences. Most of them loud. The Webers suck and snort, the exhausts growl, air rushes in the open window and about the cabin, the suspension rattles rather than absorbs, the steering is not really doing much except building the biceps at low speeds.

Yet through it all that engine is an absolute gem; no hiccups, no tantrums. Also no cam phasing, no variable valve timing, no direct injection.

Nothing but an eagerness to devour the road ahead. And a shedload of hydrocarbons spewing out the dual exhausts.

Dip the malleable twin-plate clutch, snick through the surprisingly accurate gearbox, then glance at the speedo: 80mph! And we’re just playing between 3000 and 4000rpm. The 6000rpm redline is definitely off limits. 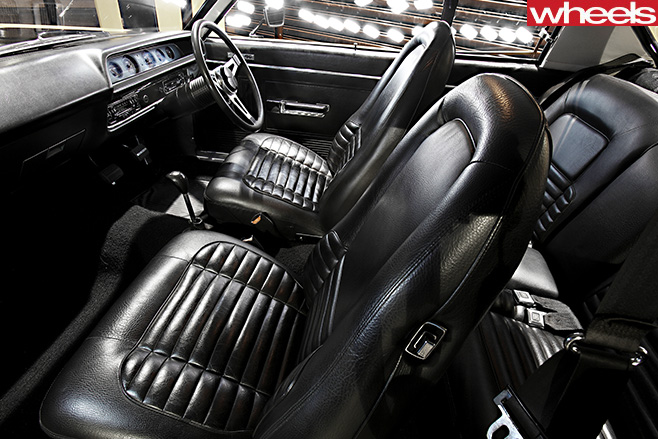 “You get a ringing in the ears after driving it for a while,” Ron admits. “It wears you out when you drive it all day; you get exhausted. And that’s what cars used to be like back in 1971, and that’s why I love it.”

I know exactly what he means. Just riding in the Charger, I’m a kid again, travelling in dad’s HT on his country rounds. The seat sinks like a Tontine, the dashboard is flat, the radio has numbers and lines on its screen, the gearlever sticks out of the transmission tunnel – there’s no centre console. There’s an ashtray and a glovebox, but no grab-handles, no cupholders, no iPod input and no airbags. Virtually everything I touch is metal.

Compared with the refined, quiet, oh-so-accessible Ford and Holden, the Charger is simply at a lower, rawer state of evolution. Yet, as they have improved so the newer cars have moved together, narrowing their differences.

But like every comparison test, this one has its moment. Those crucial few minutes when a bunch of fractured thoughts meld into one unshakeable, irrefutable truth.

Brunelli’s camera is tucked away for now and the E38 is tinking and tonking in the shade. McKay and I eye off the delicious set of corners that curl downwards both ways from a hooking, rough-edged, off-camber turn. It’s time to up the tempo.

Stability control is off, tyre adhesion is being tested harder, cut-outs are being hit. We each run as hard as we dare both ways in both cars. And we emerge eyes shining, talking over each other like excited kids.

“The faster you go the better the Falcon gets,” says McKay lucidly, and accurately, when the babble finally subsides.

The Ford’s trump card is steering that gets more refined as the pace increases. At the same commitment levels, the Commodore starts to lose its connection.

The XR turns in with a smidgen of understeer, sits flat mid-corner and can then be booted out, rear tyres gripping or drifting at the mercy of your right foot.

The SV6 rolls more, lurching in that signature VE way, yet it too has terrific, controllable grip. The widest gap is braking performance. Neither system is state-of-the-art, but the Ford offers more feel and power, the Commodore’s pedal squishes under initial pressure before reassurance arrives.

The Falcon is so cohesive you forget its size; it’s alive in the way it simply shouts at you to go harder. And you know it’s got the depth of talent to back up the talk. You get in grinning, get out laughing aloud. The Holden is slightly more reserved, not as encouraging. You get in smiling, get out smiling.

Don’t be under any misapprehension about the SV6. It’s the best six-cylinder Commodore we’ve ever driven and in some ways – refinement, economy and safety equipment – it out-performs the XR6. But we’re here to find out which of these two most accurately, passionately reflects the Charger’s spirit and fire.

Ron goes for a quick drive – in terms of both time behind the wheel and acceleration rate – and comes back approving of our gut-feel: “It’s very hard to say one is better than the other. But the XR has got the toe; it’s the one that feels more like the Charger six-pack.

“But,” he adds, eyes twinkling, “put the steering and another gear from these things into a Charger and it would probably eat them alive!”

While not destined to become an Aussie automotive icon like the Charger, there’s no doubt 40 years from now someone will love their old FG XR6 just the way Ron loves his R/T E38.