For 50 years, Ford’s Falcon had ridden the ups and downs of an ever-changing, always competitive, Australian car market.

For 50 years, Ford’s Falcon had ridden the ups and downs of an ever-changing, always competitive, Australian car market..

We Aussies, it’s said, are inclined to bet on two flies crawling up a wall. At the foot of that fondness for gambling, I reckon, is a fierce respect for competition. And therein lies the key to the Ford Falcon’s place in Australia.

Falcon isn’t just another car. Fifty years ago it became the first locally-built competitor to Holden. It has endured, through an era of a genuine Big Three and against imported rivals almost as long-established, to tower as one of only two automotive pillars of our broader culture. 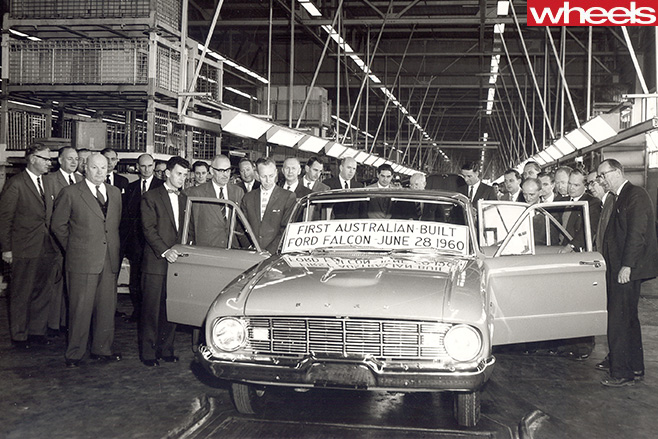 To dispel any doubts about what Ford means to many Australians, go to the top of Mt Panorama in October.

As we all know, Holden got here first, commencing full manufacturing in 1948. When Falcon arrived in 1960, Holden held more than 50 percent of the market. It has always played the cultural card well, re-writing our national anthem in the 1970s with a jingle pinched from its American sister, Chevrolet. 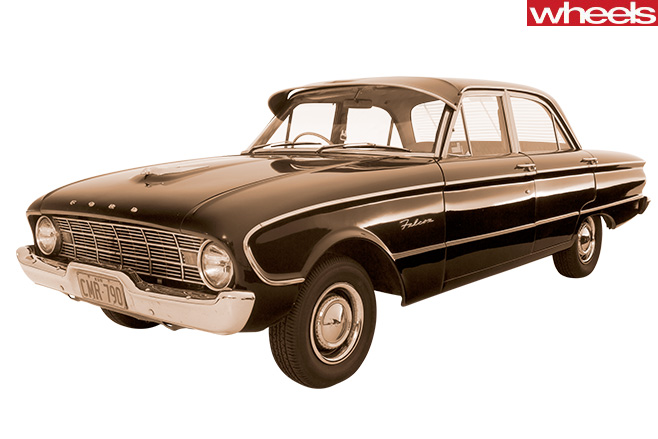 It may well be Holden cars among the football, meat pies and kangaroos – but with Ford, it’s the Falcon. The longest-running nameplate in Australia. Excluding ‘F-Series’ trucks, it’s also the oldest in Ford’s world, outdating Mustang by four years.

With Holden having a 12-year head start in Australia, Ford had realised its local manufacturing future lay neither in dowdy British nor oversized American models. Australians now knew what they wanted: compact, potent and durable family cars. 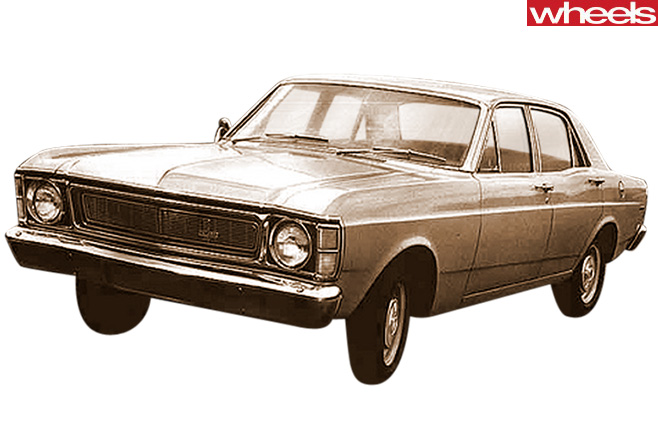 A Dearborn styling study codenamed 19XK Thunderbird was chosen by Ford Australia around mid-1958. It was an 11th-hour decision, as a program was already well-advanced to put the Zephyr MkII into full local production. But the Falcon was designed to be built in 17 hours; the Zephyr was nearer to 50.

Ford Australia’s £18m spend suddenly became £25m to retool for the Falcon’s panels and lightweight, six-cylinder engine at Geelong – another place where they’ll tell you about the Falcon’s significance – and to refit the still-new Broadmeadows assembly plant. 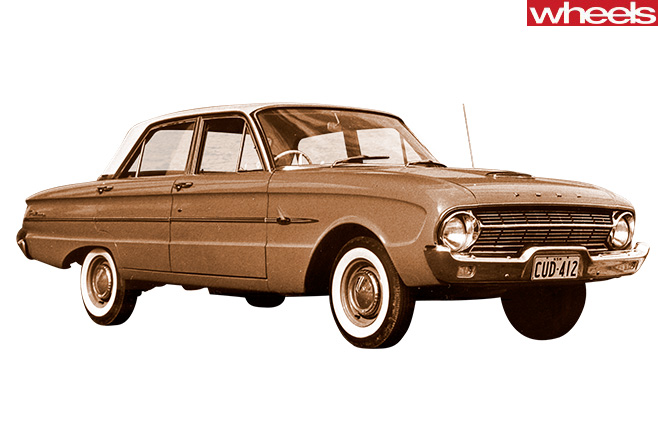 The XK Falcon’s September 1960 launch in Melbourne was pure Hollywood. Indeed, Hollywood had been in town the previous year to film On the Beach (whose star Ava Gardner reportedly described Melbourne as “the perfect place to make a film about the end of the world”).

Buses ferried 500 national dealers for a two-day ‘Ford Falcon Festival’. A song was commissioned for the wireless: “Today is an historical occasion/we’re presenting a car you’ll applaud/It’s Australian, with a world of difference/a brand-new Falcon by Ford…” 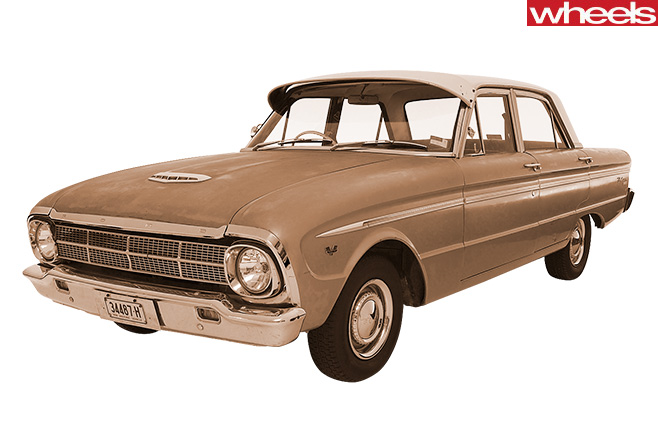 It was a different time. Chrysler’s locally built Valiant was still two years away, as would be the first noteworthy appearance of brands that, only 20 years earlier, launched their latest models on Australia from submarines or the sky. 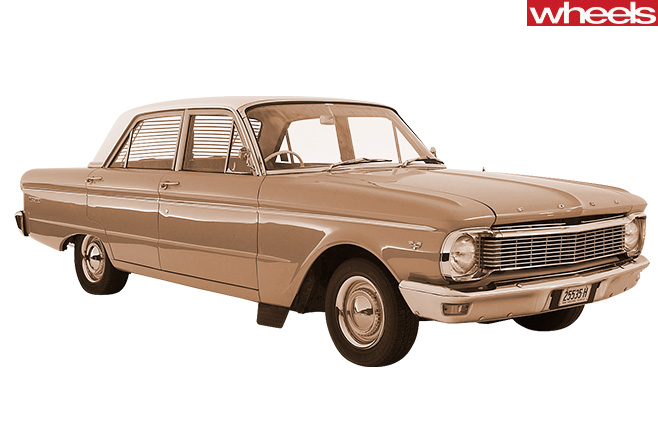 New-car buyers had no shortage of variety – a Wheels 1960 price guide listed no less than 40 makes – but no car approached Holden’s winning package of size, strength and local spirit. The arrival of a new, Australian-built car wasn’t just another, say, Skoda or Ssangyong slipping in. 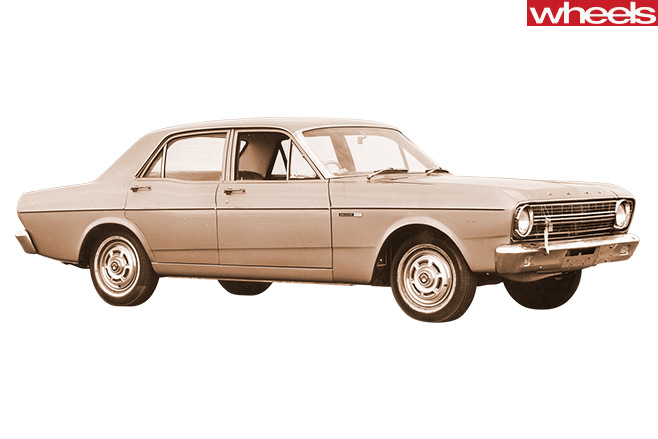 In 1960 my father, Max, was a 26-year-old advertising exec and weekend Simca racer (soon to step-up to an ex-Brian Muir Holden). I asked if he recalled the context of the Falcon’s arrival.

“When it appeared in showrooms, and on TV, it got lots of attention,” he recalled. “Ford was already a major player, with the Customline and Zephyr, so there were die-hard Ford fans already. But Holden was so dominant, so firmly entrenched as the Australian car … no-one saw anybody knocking Holden off its perch.” 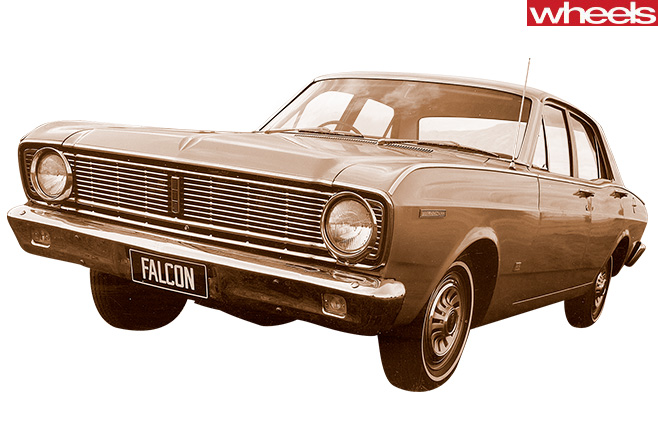 The early Falcons suffered from front-end weakness, and as Ford tried to struggle to its feet with the improved XL and XM, Holden delivered a gut-punch in 1963 with the all-conquering EH.

It’s no exaggeration to say XP was make-or-break for the Falcon’s future in Australia. The stunt that would prove its worthiness to private and (crucially) fleet buyers was a five-car durability marathon that began on April 24, 1965. 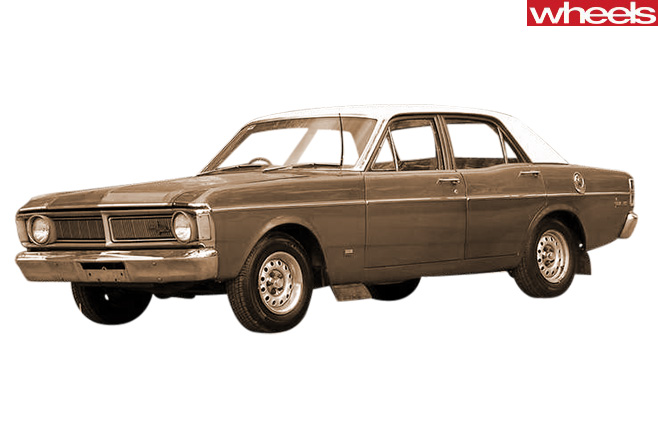 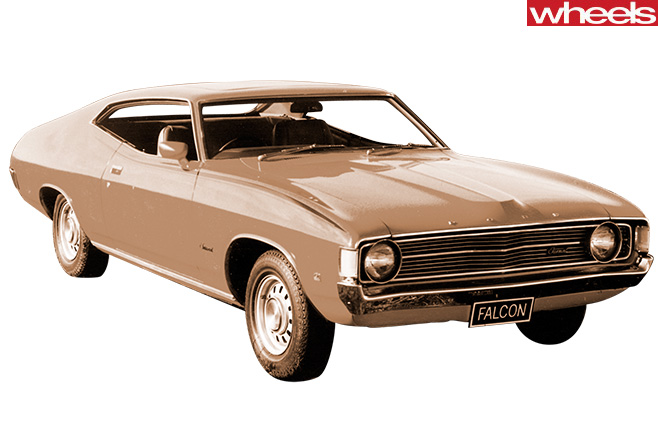 Dearborn had reportedly approved the event on the assumption it would use the high-speed oval at Ford Australia’s just-opened You Yangs proving ground. In fact, the venue was the ride and handling circuit, a two-lane, coarse-surfaced, 3.6km mini-Mount Panorama. 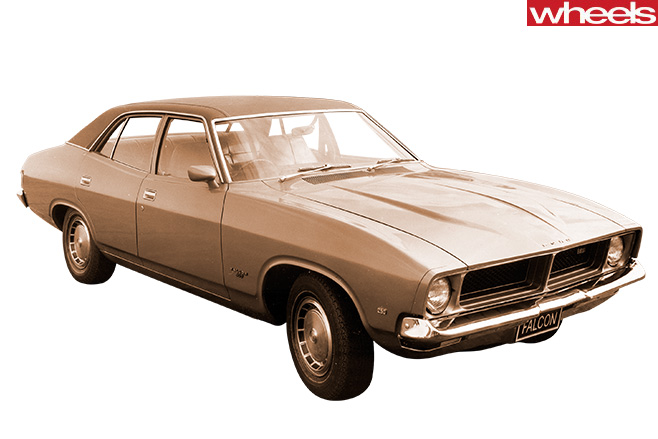 My dad was one of those conscripted into a driver line-up that had, within 36 hours, become a panicked roundup of race and rally talent. Among the stars were ‘Pete’ and Leo Geoghegan, Fred Gibson, a debutant Allan Moffat, Bruce McPhee, Barry ‘Bo’ Seton, Kevin Bartlett and Round Australia Trial legend Ken Harper.

The cars clocked the 70,000-mile mark after eight and three-quarter days, earning 49 (CAMS-sanctioned) national time and distance records in the process – all reported nationally on radio and TV. And as Ford’s sales team swung into full force, once-burned fleet and private buyers began cautiously returning to the brand. 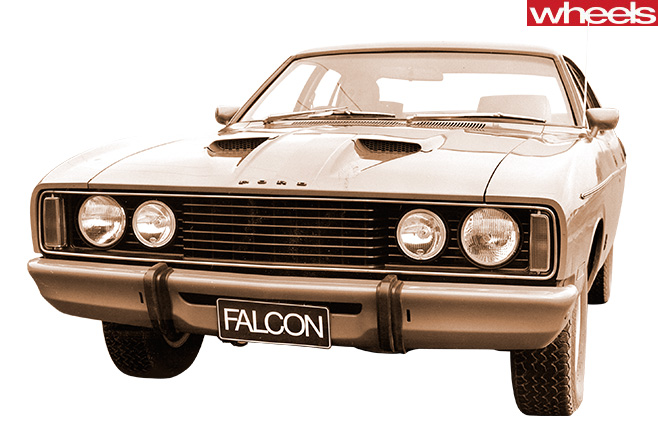 Little more than three years after Holden’s now-ubiquitous EH, Ford itself had fresh momentum to carry into a new model. The September ’66 XR, with new Coke-bottle shape, bigger sixes, plus the Windsor V8, put Falcon firmly on the map. 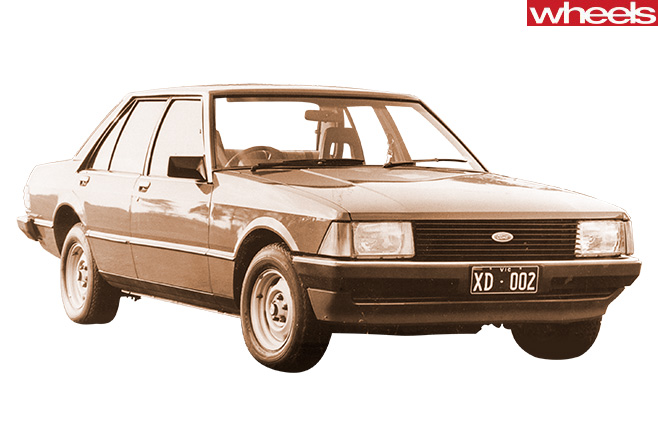 Sealing back-to-back Wheels COTY gongs for XP and XR was of great satisfaction to Ford (not foreseeing it would be another 36 years before Falcon’s next COTY), but more important was its cultural impact on the once-invincible Holden. 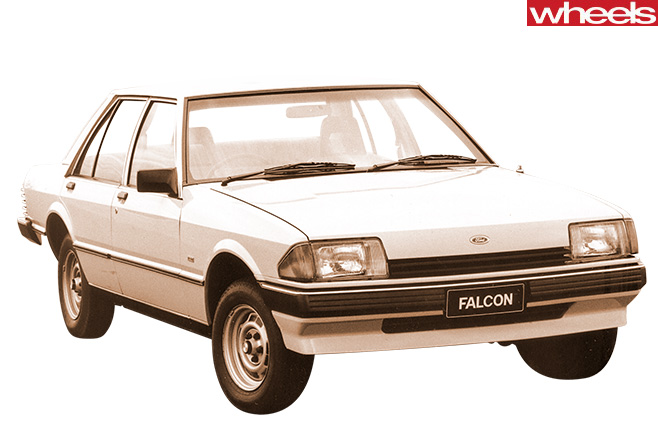 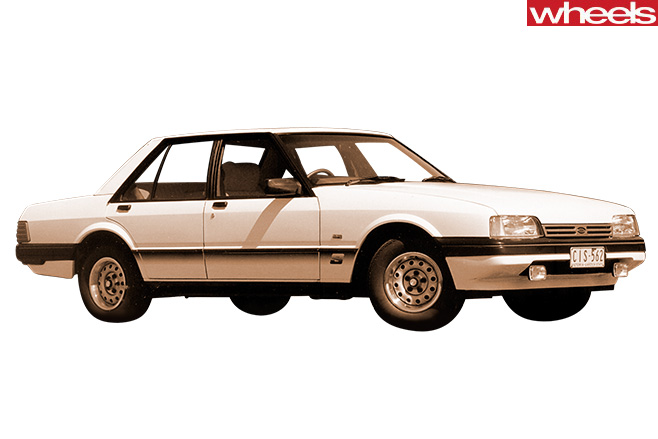 With Ford’s US Mustang an instant icon – Ford sold around 160 of the 1966 models here – the landmark, Firth-developed XR GT had plenty to trade on. Here began the great Holden versus Ford touring car war.

Ford had its Cortina and Escort, but it was still very much the Falcon car company. Meanwhile, Holden had developed more of a small-car mentality through the ’70s. It had the trusty Kingswood full-sized family sedan but, V8 Monaro and GTS variants aside, its performance image was carried by the Torana models. 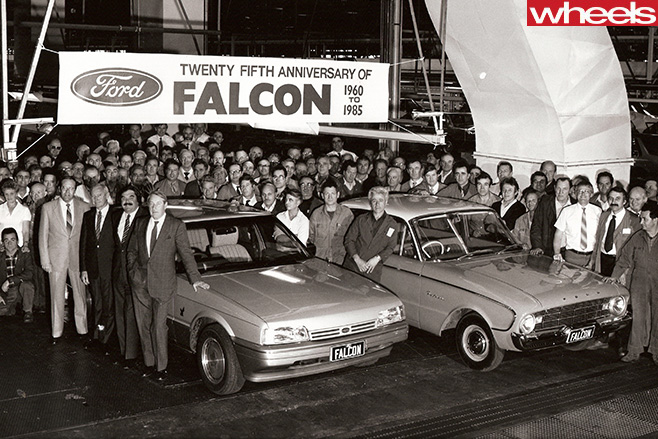 The global fuel crisis of the late-1970s only cemented Holden’s notion that the time was right to downsize. Its misreading of the local market with the Opel-derived Commodore VB of ’78 would be another of the industry’s pivotal moments – and one of its biggest surprises. Many within Ford were convinced the ‘Blackwood’ XD would be a fat flop. 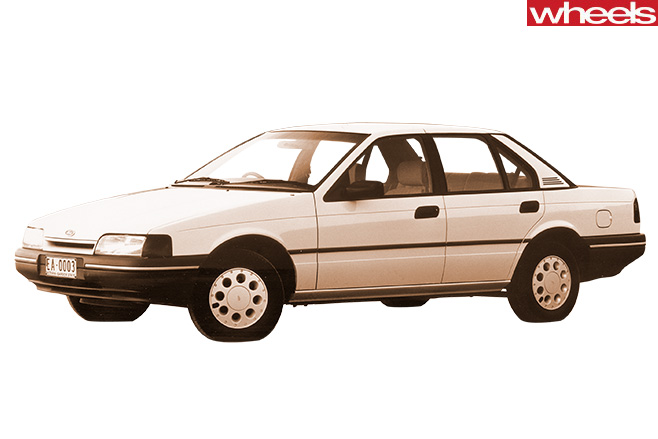 Boardroom panic prompted a drastic weight-saving program to enable XD to compete on economy while retaining its full-sized advantage. At some expense to build quality and finish, the XD’s ploy worked – and its much-improved successor, the coil-sprung XE, drove the final nail into the Commodore. 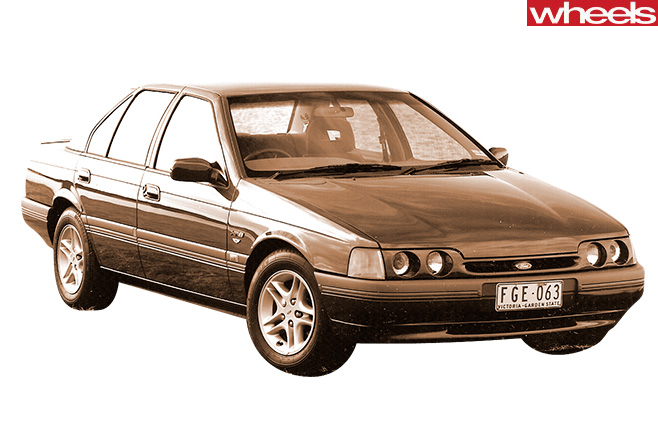 Holden would be lumbered with the smaller Commodore until 1988; even then, its VN was a cheat, effectively a ballooned body on the old undercarriage. Ford’s all-new EA of the same year was more handsome; however, caked with mud on Wheels’ epic, 20,000km outback trial of ’88, it was hard to tell them apart. 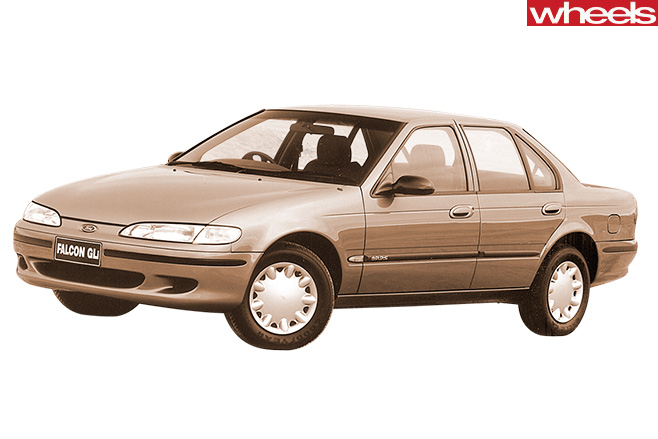 To some extent, Ford was paying for a decision made during the cocky heights of 1982. In November of that year, 50 years since building its first V8 at Geelong, Ford farewelled it from the Falcon range (with the still sought-after XE Ghia and ESP). 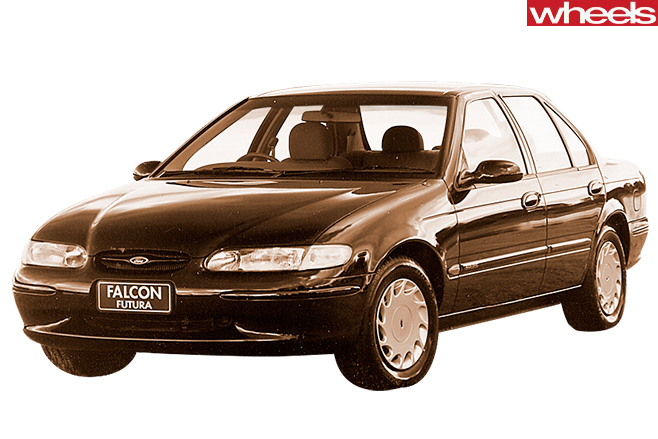 Axing the V8 would lose Ford a generation of enthusiast buyers. While V8 Commodores made hay on the racetrack through the 1980s, teenagers had no emotional reason to bond with the Falcon.

In 1998, however, Ford found itself with a new set of problems. Seeking younger buyers, the ‘New Edge’ themed AU Falcon backfired spectacularly with frumpy styling and impoverished interiors in lower-spec models. Rival Commodore VT, launched in ’97, was the best ever and reigning Wheels COTY. 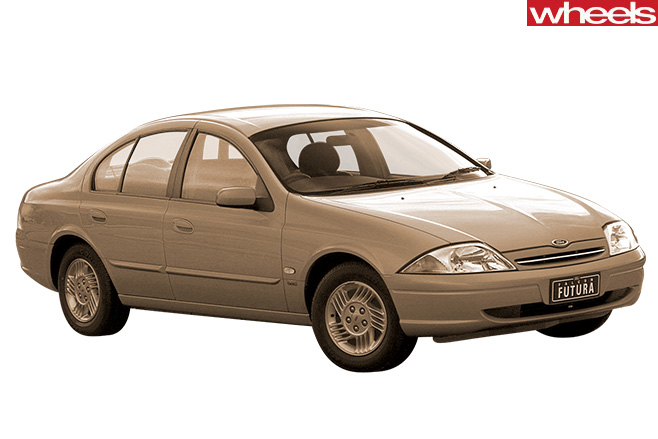 As Ford had discovered at the beginning – and Holden in between – it can take years for the public’s perceptions to change. Ford had been a boring brand and the AU Falcon ugly.

But gradually, with Ford’s performance wing finally being consolidated in 2003 (as FPV), Marcos Ambrose knocking Holden from the top step of V8 Supercars and the arrival of the new Boss and Barra V8s for the road-car range (replacing, incredibly, the Windsor), the BA reclaimed some of the old Falc magic and briefly pipped the Commodore in monthly sales. 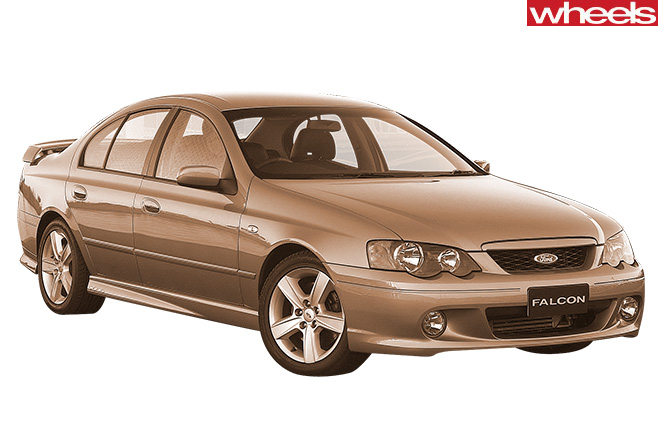 Its successor, the FG, has likewise been good enough to top Commodore sedan on occasion; with a largely new front suspension, optional turbocharged engines and a five-star ANCAP rating. 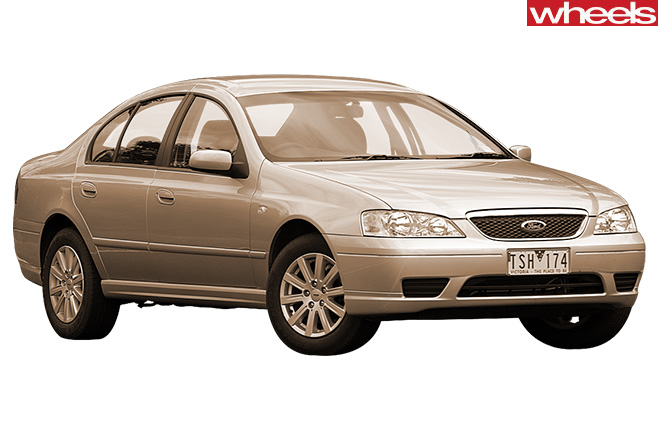 Too bad nobody’s looking. Ford read the winds of change in ’04 with the Territory, a vehicle that offered additional proof of the rightness of the BA platform. Further confirmation of this ominous shift was to come with this year’s axing of the venerable Falcon wagon. 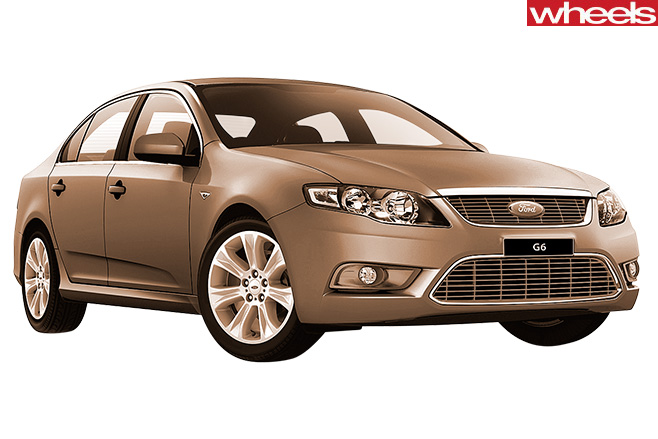 In 2009, large cars accounted for 11.8 percent, with Falcon sales just below 32,000 units; Commodore 51,000. The promised land of industry consolidation, shared platforms and reduced model cycles about which we wrote 10 years ago, has fragmented the market and hit its traditional figureheads hardest.

Falcon is playing harder and better than ever, but the game has changed. And the odds on its survival are only getting longer.