A Singaporean Air Force pilot peels off his aviator shades (managing to look disturbingly like Tom Cruise in Top Gun as he does it) and casts an appreciative eye over the low, sleek yet bulbous profile of the new Porsche 997 911 Turbo. “You've got a pretty cool job, eh?“ he grins. Maybe so, but if I could have half a crack at your F-16... I think to myself.

As his companions scream overhead in formation, our small, not-so stealthy million-dollar trio deploys from Darwin. Our mission: to run hard, fast, and low in Porsche's devastatingly effective 997 Turbo on the unrestricted roads of the Northern Territory. 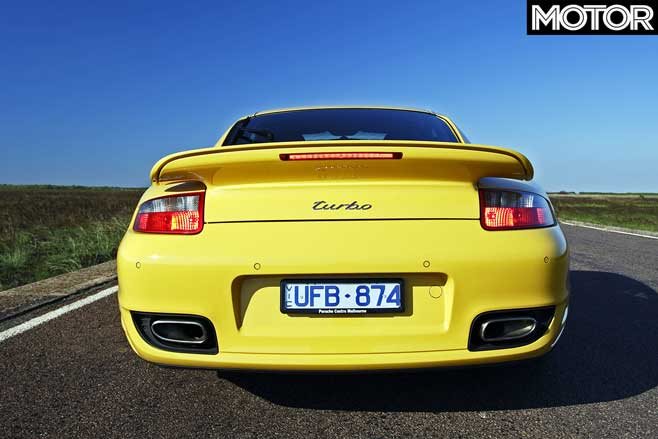 Launched to the public in Europe last month, 120 Aussies have indicated their desire to park the $337,000 ($345,000 in five-speed Tiptronic guise) Stuttgart screamer in the garage, but 40 are going to have to wait at least 12 months.

And, much like a modem fighter bomber, it's a rolling testament to the depth of Porsche's engineering talents. Based on the new Carrera 4 bodyshell, the Turbo, despite being wider and safer than the 996-gen 911 Turbo, is actually 14kg lighter than its predecessor, thanks partly to alloy doors, pressure-cast frame rails and trunk lid.

Powered by a worked-over version of the previous Turbo and GT3 3.6-litre flat-six, the dry-sumped boxer differs from the current Carrera engines in a number of areas, chiefly in its two-piece design (the Carrera‘s crankcase and cylinder block is cast as a single piece) and its cylinder dimensions (a wider bore and a shorter stroke). 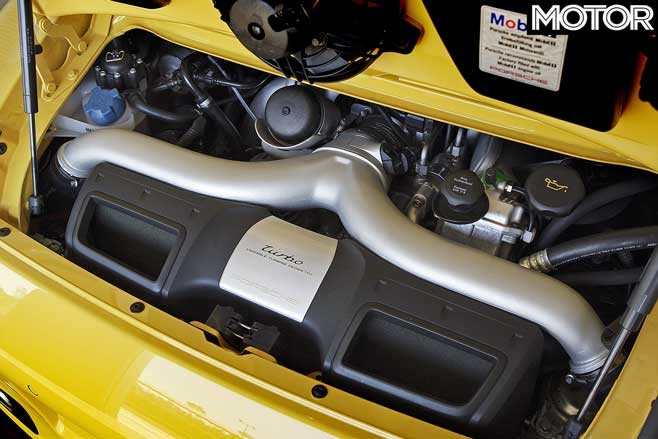 Unlike the previous turbomotor, the twin KKK K24 turbines are equipped with variable vanes on the inlet side. At lower revs, the vanes - capable of withstanding gas temperatures of 1000°C - close up to speed up exhaust gas velocities and wick up the boost more quickly, then open up as the revs build to provide oodles and oodles of lovely oomph.

It's not all about horsepower, though; this thing packs a serious payload of computing power in its chassis management systems. Based around the Porsche Traction Management set-up, latitudinal and longitudinal sensors at various points on the chassis report back to the PTM computer, which in tum combines with the Porsche Stability Management System (PSMS) and the Porsche Active Suspension Management (PASM) two-stage electronic damping system.

Weapons of traction construction? Absolutely. In the normal setting, the Turbo is comfortable, despite its stiff chassis and large wheel diameter. Firm it all up, and it's a bit skittish and nervous in low-speed, high-amplitude bumpy stuff. Press on a bit, and it makes a lot more sense, stiffening both the roll and the pitch/dive planes. 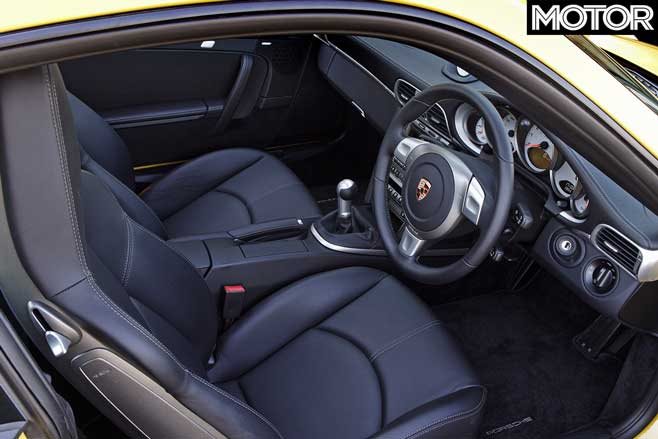 Its chief chassis weapon, though, is the electromagnetically controlled multi-plate clutch pack that replaces the previous model's viscous unit. Able to divert torque on demand, all three systems (four if you could the antilock braking computer) work together in a surprisingly unobtrusive way to make this 353kW monster as easy to drive as a Golf GTI.

The heavily revised Tiptronic S box can make things even easier still. Still no PDK double-clutch box yet, you ask? Working on it, says Porsche (see below). In the meantime, the semi-automatic 'box has been so heavily reworked that Porsche feels it can no longer ask buyers of its lower-end cars to pay the same amount as you'd pay to have Tip in your Turbo. And it's not a bad thing, though, as the six-speed manual gearbox has been beefed up to handle the extra loads, and is a thing of beauty and precision to use. Clutch modulation can be a bit tricky, though. 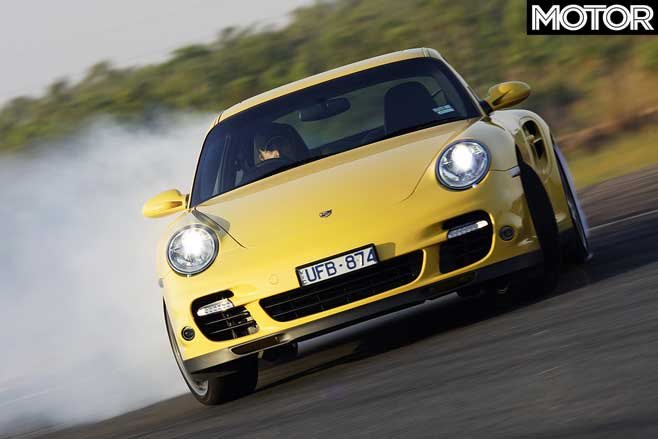 If there's a better way to explore the abilities of such a machine than touring it in the Top End, I’d like to see it,  get its address and move there. Time and again, as we traverse the vast tracts of unlimited speed-zone roads, the digital speedo rolls up to, on and past the 300km/h mark (there is about 6km/h difference in true and indicated in our test Tip-equipped Turbo, according to our Racelogic GPS-based DriftBox test tool).

The tyre roar drowns out any chance of conversation and hands grip the wheel ever so gently as eyes widen, straining to see over the horizon. There's the merest sense of the front-end lightening under power, but the significantly revised aero tweaks - the underside is impressively smoothed over and incorporates cooling vanes to direct air towards, not only the 350mm front brake rotors but the same-diameter rears, as well - are doing the job, forcing the Turbo to the rippled tarmac. 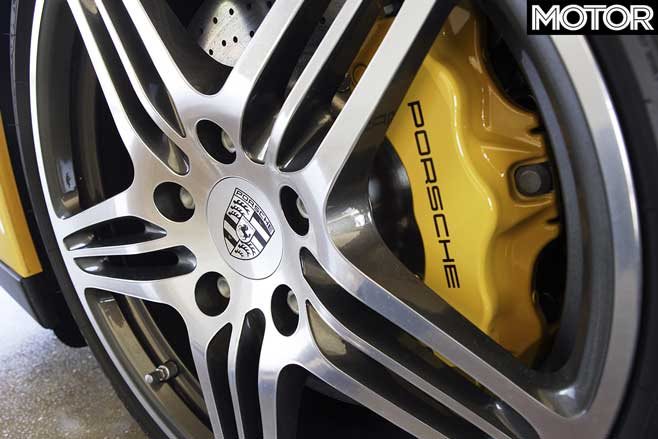 And it's doing it all so ridiculously easily; steering inputs are minimal, the throttle answers the call whenever you want it, and there's suspension travel left to absorb road joins and patches with aplomb. Enter a comer at the wrong end of 200km/h and ease off the gas a bit quickly in most cars, and it’s usually goodnight Irene. In the Turbo, it's nothing. And I mean nothing. It's a car that is as user-friendly and as sedate as a shopping centre ride-on toy but, in fighter-bomber terms, it can level cities when the desire takes you.

Straddling the crown of the road, eyes straining to see over the next horizon line, we're covering more than 100 metres a second before traffic (it‘s still got to be 800m away, but I'm not taking any chances at these velocities) forces us to wash off almost 200km/h, the massive Michelins lifting rocks right out of the coarse chip road surface as the huge pads rip into the steel rotors, the clutch-pack centre diff, busy shuffling torque across the diagonal axes of the car, commands the rear diff to open up and the car sucks into the road to pull up straight and true with plenty in reserve. This thing is simply astonishing. 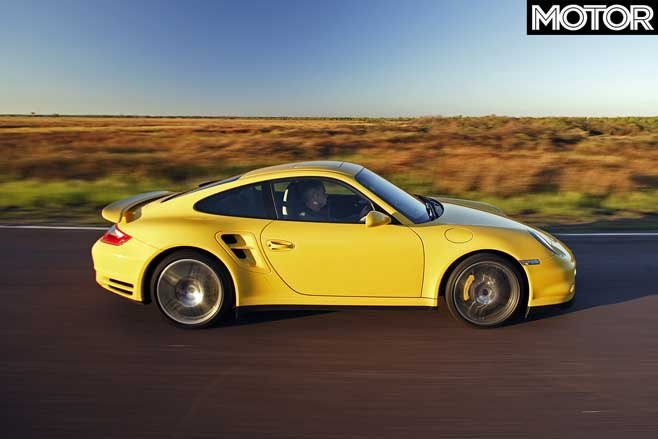 In fact, it’s so competent, so accomplished, that it's possible to accuse the Turbo as being, well, too polished and too composed... too Mr Spock and not enough Captain Kirk, if you will. It's a car that keeps some pretty serious company (think Lamborghini Gallardo and Ferrari F430, for starters) and its almost clinically capable abilities may pale in the bright light of a thoroughbred Italian sex-bomb.

Spend a bit more time with it, though, and it’s impossible not to come to sincerely admire the absurdly deep reserves of strength aid talent that the Turbo has. It's an incredibly well-executed car in so many respects. It's not perfect, by any means; tyre roar intrusion into the cabin gets annoying after a couple of hours on coarse chip macadam, rear three-quarter view isn't great, and baggage stowage is a wistful dream; not a great asset in a car that's as good at devouring vast distances as this one. For $350,000, I'd like my Turbo to look a bit more different than a stocker 911,  too.

But it‘ll eat pretty much every Italian supercar for breakfast (Porsche claims a 3.7-second time to 100km/h in the Tiptronic S-equipped car, and we did it two-up, full of fuel and stuffed with luggage), and it'll do it all day. Another sortie, you say? Tally ho! 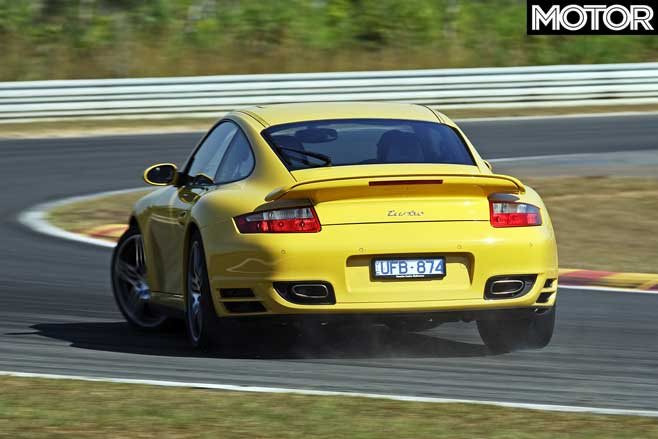 Ever since the Porsche Double Clutch (Porsche Doppler Kupplung, or PDK in official nomenclature) five-speed twin-clutch debuted in Porsche’s 962 endurance racer in 1985, people have been wondering when they would put it in a production car.

Well, they have, sort of. Thanks to its ties to the VW/Audi empire, the basic premise of Porsche’s twin-clutch layout debuted in the Audi TT 3.2 a couple of years ago, and now sees duty across the group, including in the uber-sexy Bugatti Veyron.

It was strongly rumoured that the 997-gen 911 Turbo would be the first Porsche to cop the new system, but instead it gets a heavily revised five-speed Tip ‘box.

“It’s not yet to a level that a Porsche customer would be happy with,” insists Dr Erhard Moessle, GM of the 911 Turbo project. “When it is ready, we will offer it.”

It’s thought that the ‘box’s biggest bugbear is its weight - rumoured to be almost twice as heavy as a Tiptronic ‘box. 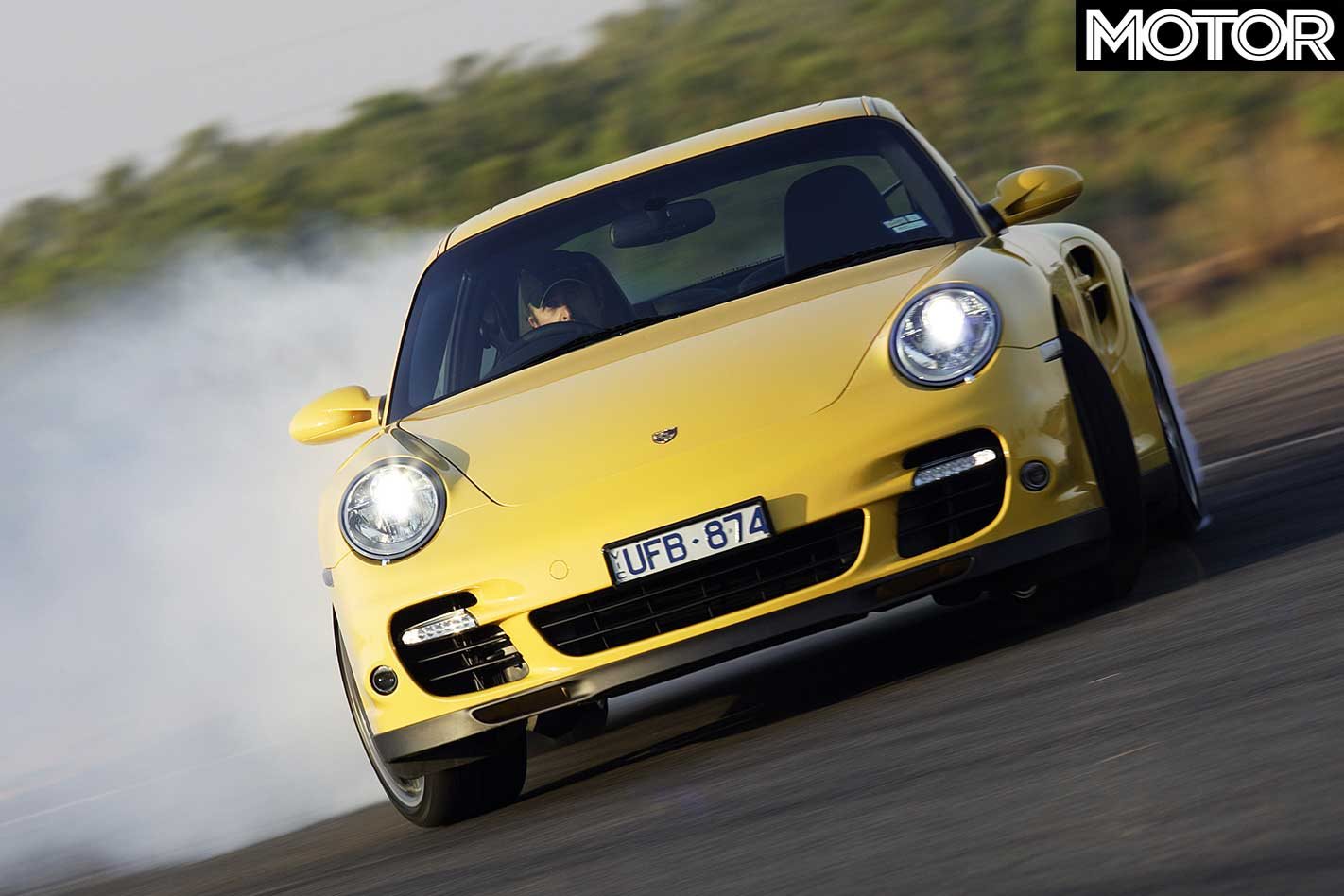 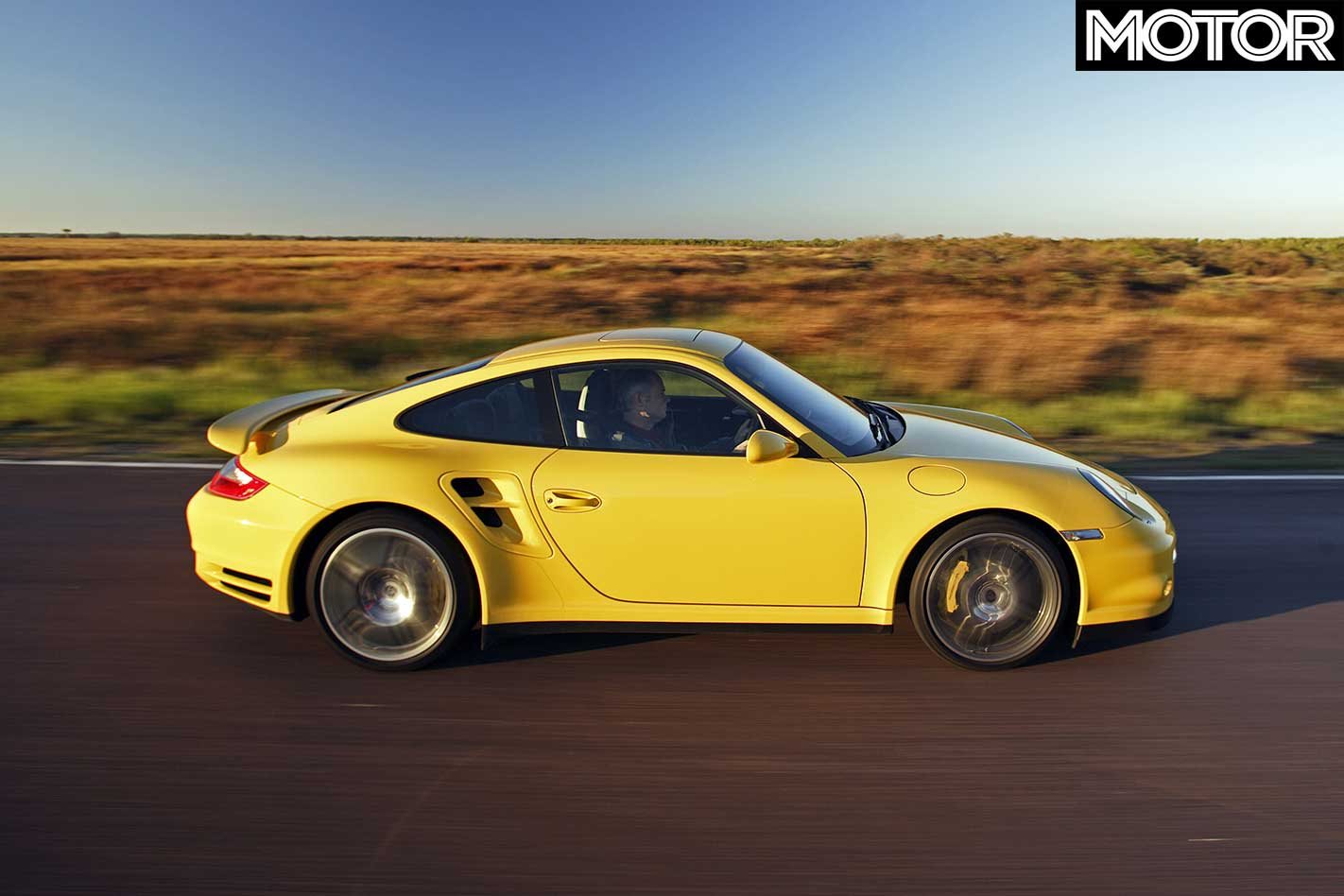 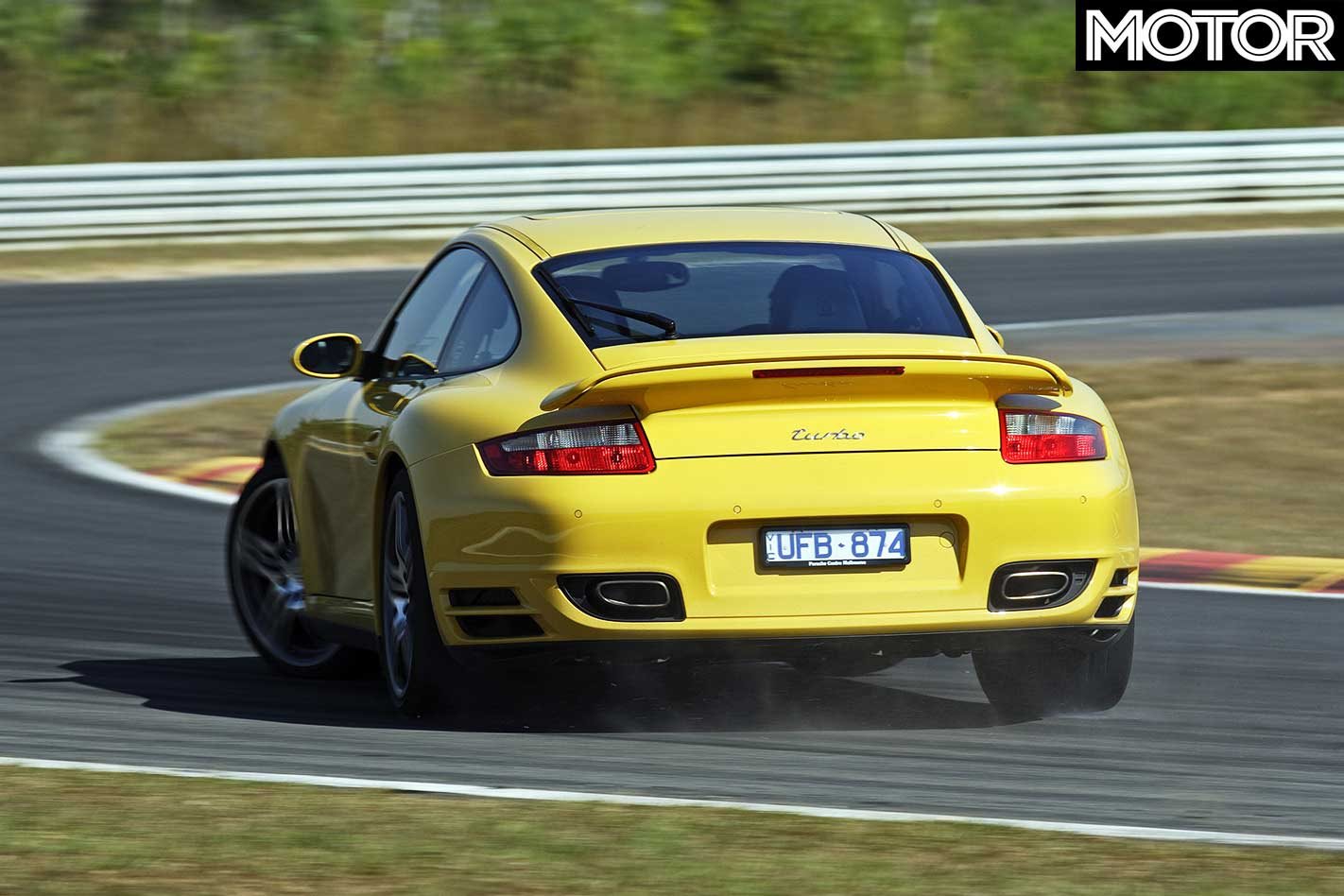 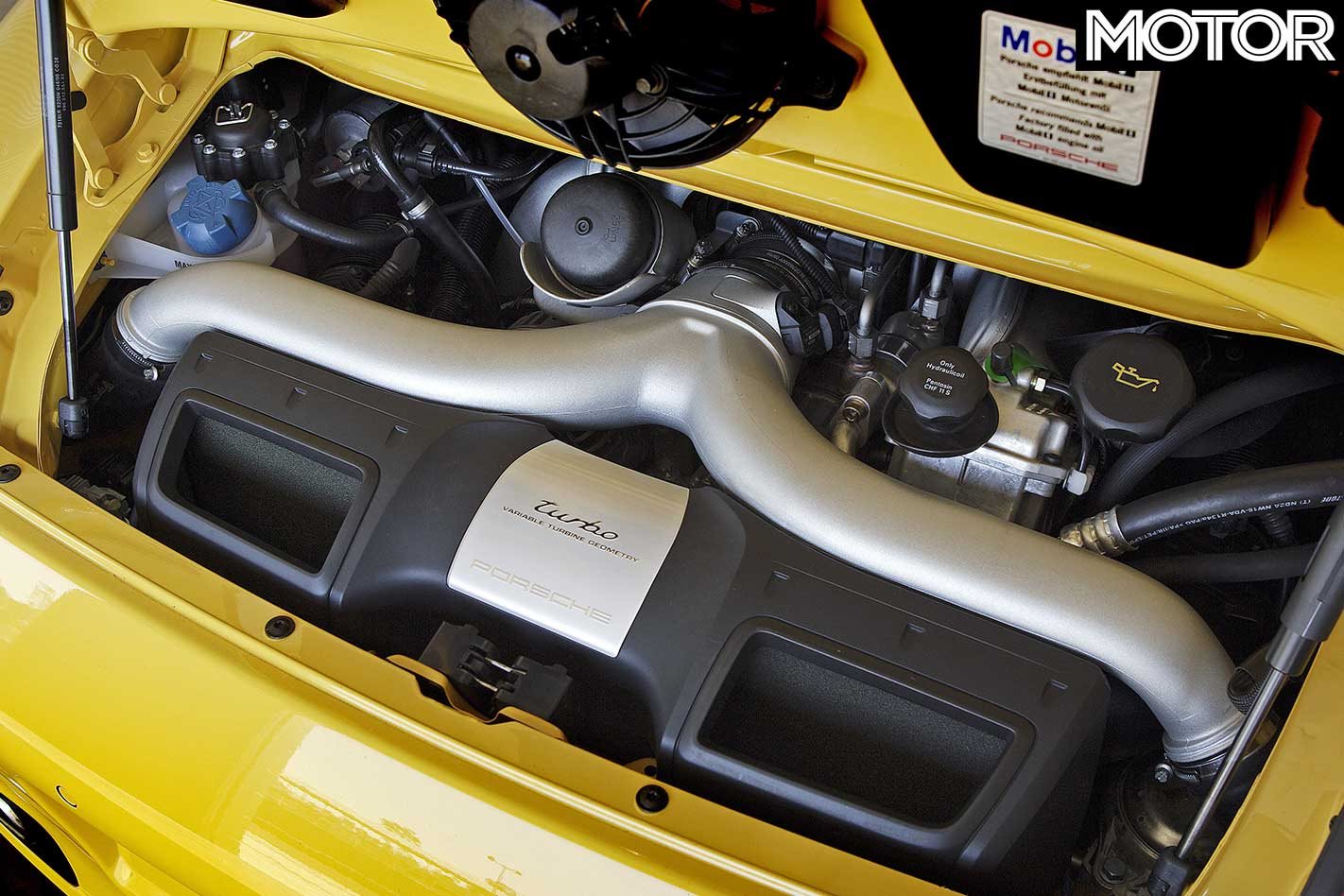 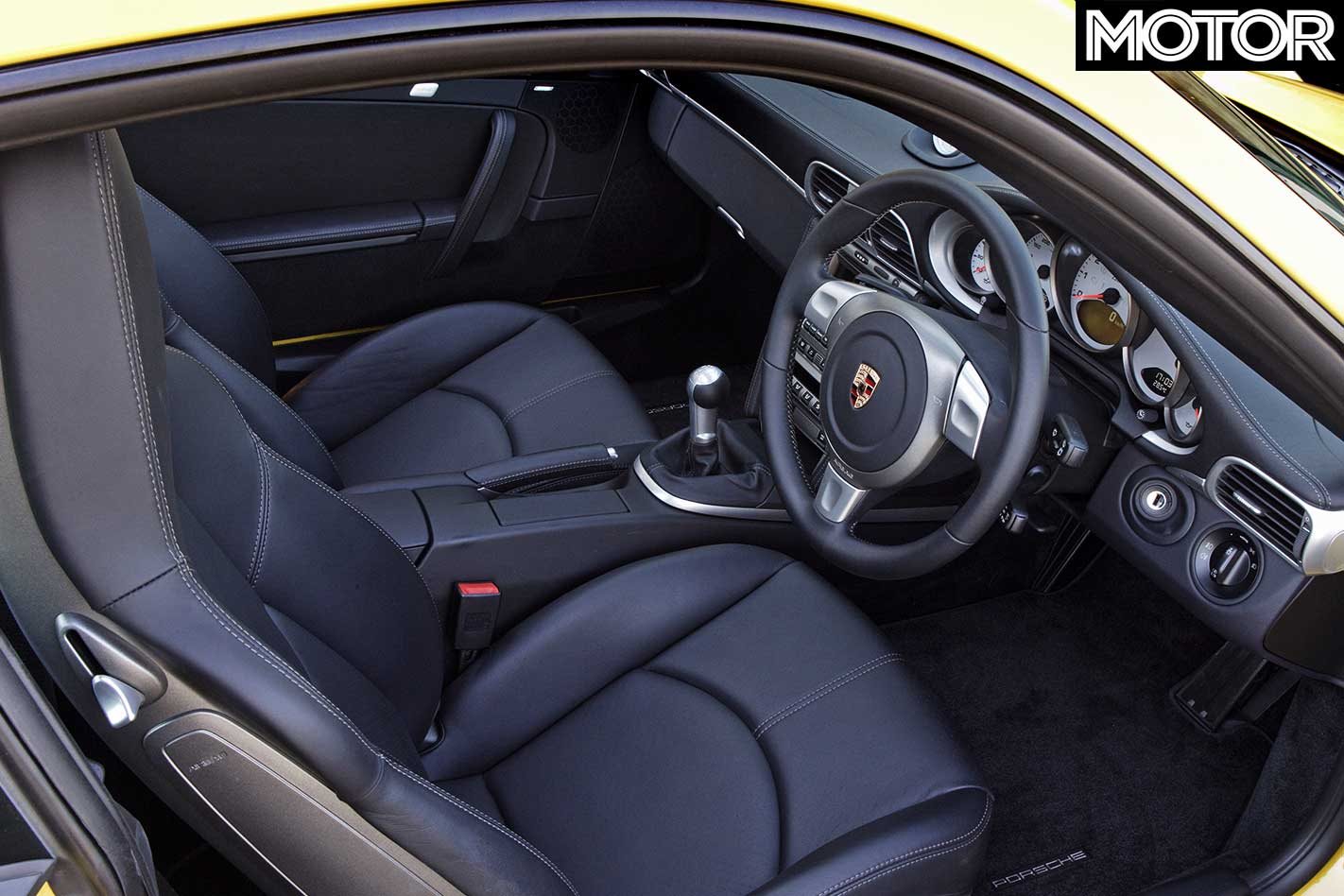 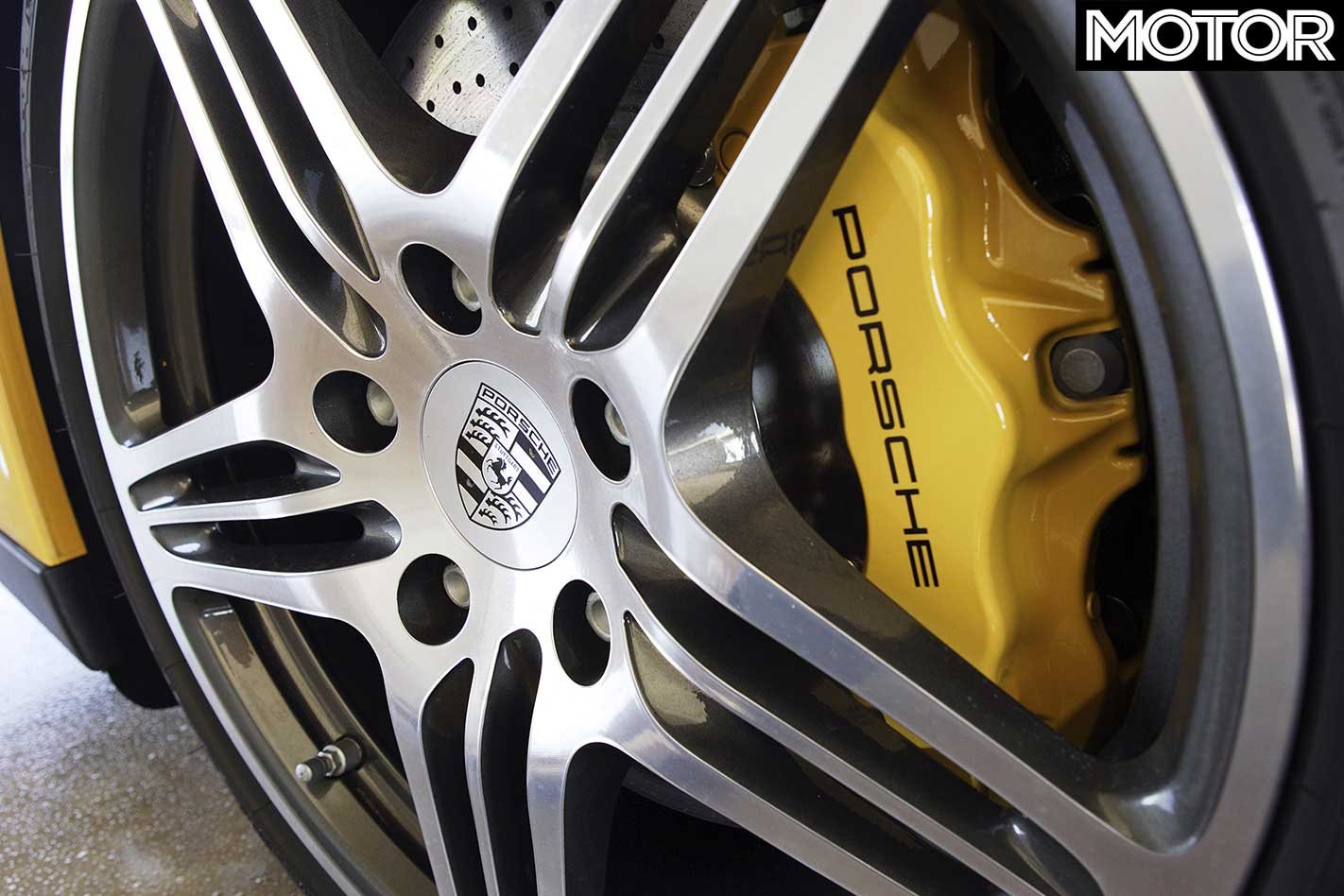