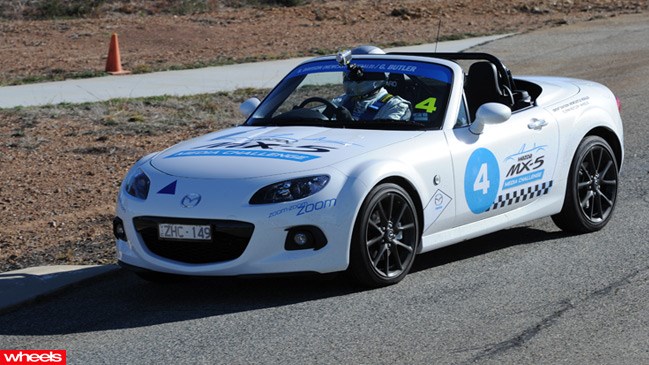 Call it an extreme grudge match. Australia versus Russia. This time it's on our home soil. Literally. Six kilometres of forestry track has been closed just outside of Canberra. A dozen production-spec Mazda MX-5s roadsters await the tender mercies of 20 Australian and four Russian journalists.

Call it an extreme grudge match. Australia versus Russia. This time it's on our home soil. Literally. Six kilometres of forestry track has been closed just outside of Canberra. A dozen production-spec Mazda MX-5s roadsters await the tender mercies of 20 Australian and four Russian journalists.

The Aussies want revenge. Last year, we were soundly beaten in Siberia, trounced by Russians with more skill on the 1200m race track ploughed in the snow covering a frozen lake. We Aussies weren't just fish out of water, we were flopping stupidly around on the lake's frozen surface, battling mightily in conditions we'd seldom encountered, and usually then only with fear and caution.

It was like trying to find traction on a slip-n-slide, more comical than heroic, as the cars inched their way around the treacherously slick circuit. The start was particularly farcical. From a standing start six cars crawled impotently towards the first corner, lightly-studded road tyres unable to find meaningful purchase on the ice beneath. Anything more than 1500rpm sent the rears into a frenzy and drivers rowing the gearbox in search grip. Still, as the race progressed the Aussies acquitted themselves impressively, until yours truly snotted a snow bank on the last lap, turning an unexpected podium into an ignominious fourth.

This year, it's payback. And this time the Russians will be racing our our chosen surface. No stupid ice this year, just a fast and grumpy special stage from the Rally Canberra. But first, some warm-up events: lapping a wet skid pan, then a dicky motorkhana in a carpark, and a ballsy 700m hillclimb on the Sutton Road course. Your humble Wheels representative starts well, placing top-five in the first two and winning the hillclimb outright.

But it doesn't give me any confidence going into the final, fastest challenge. I've never done a rally, or club-raced on weekends like some of my colleagues. The closest I've come to demolishing dirt at speed is digging out the wife's veggie garden before footy starts. Still, Wheels' pride is on the line. And so is Australia's.

We get one reccie run. I ignore popular wisdom and go as fast as possible. No point trying to remember corners or implant dangerous rocks, culverts and other obstacles in my memory, I'll just deal with them as I see them. Then comes my first timed attempt. Anything under 4min 30sec is a good time for the 6.3km stage — a frightening average speed of 84km/h. The start-line marshall counts me off and I'm away.

Now, these MX-5s are absolutely stock, except for a roll bar behind my head. Oh, and the ABS has been disabled to give the brakes their best chance of correcting human error at every corner.

My mind was filled with worries before the start. Will I win? No chance. Will I crash? Well... Did I turn off the stove? But the moment my race began it all evaporated. All I could think of was throwing this game little roadster down a gravel laneway barely wider than it was at the fastest speed possible.

It's a testament to how fundamentally right the MX-5 is that we both emerged unscathed, mostly. The MX-5's 118kW was more than enough in the slippery conditions, its handling so wonderfully neutral that I could adjust it in corners, under power and on the brakes to whatever degree of slip I wanted. Despite the years and fresher, faster competition, the MX-5 remains an honest and thoroughly enjoyable sports car.

My first time: 4min 20sec. Good enough for equal second. I wasn't surprise. Stunned, more like. And just 7sec off the leader. There were a few corners I bolloxed, so I knew there were a few more seconds in there. And, bizarrely, I didn't bin it, or have a big moment. I did end the life of my front-left alloy, however. Actually, a large rock did. Luckily, Mazda had a dozen spares.

My second run was faster. I fixed a few corners, smoothed out a couple more and lopped a tasty 8sec off my time. You beauty. First place! Until I learned that Wheels' other representative James Stanford, leader after the first round, knocked 5sec off his time for a 4min 8sec. Second! Then The Age's Toby Hagon dropped in with a 4min 10sec. Third! And then one of the Russians snuck a 4min 10sec in as well. Damn. Beaten by a Russian again.

Still, I'm stoked with fourth and just four seconds off the fastest. Even better, I score second overall across the day's four disciplines. In fact, Wheels magazine managed a brilliant 1-2, with club-racer Stanford on the top step.

Now I know what it's like to be Mark Webber... 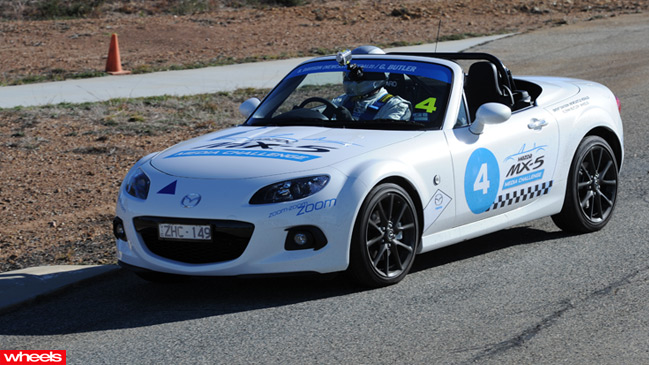 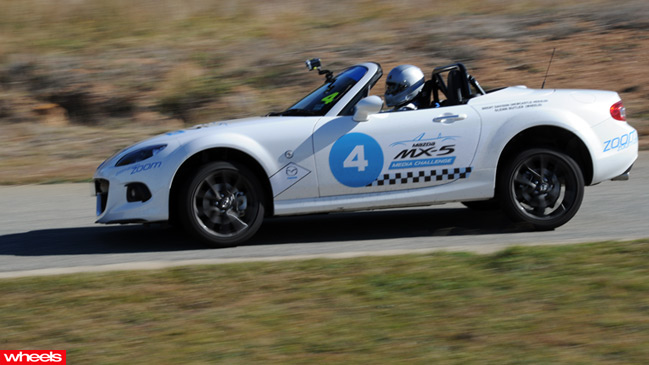 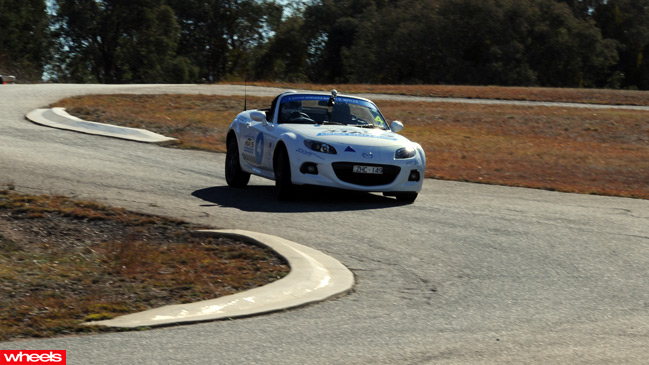 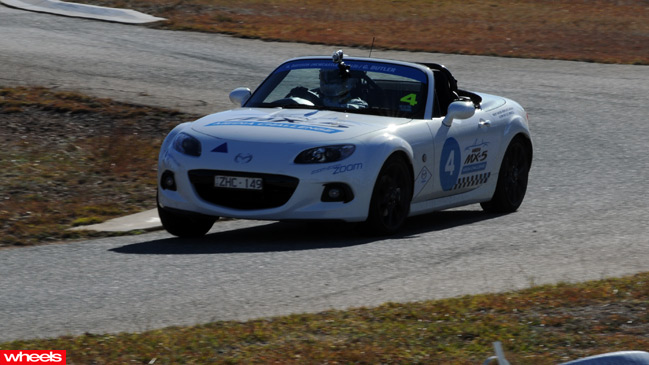 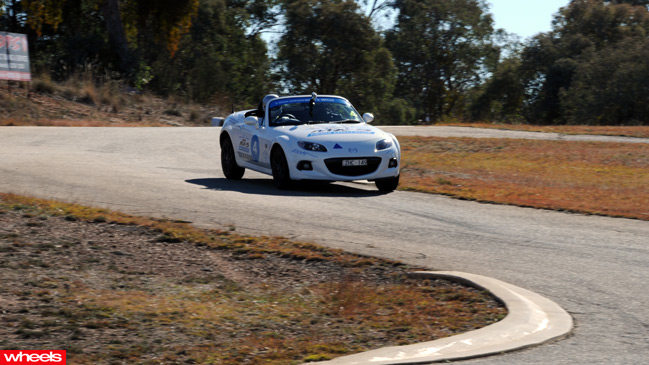 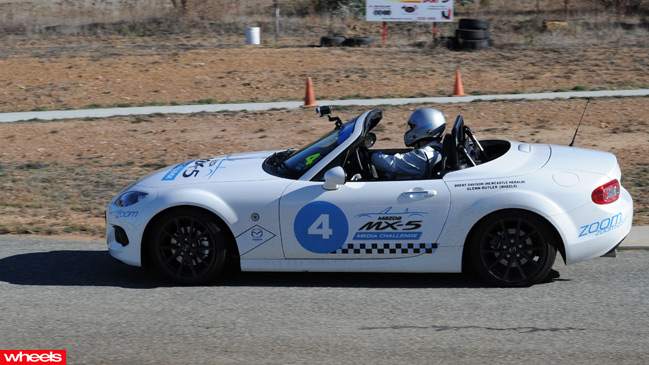 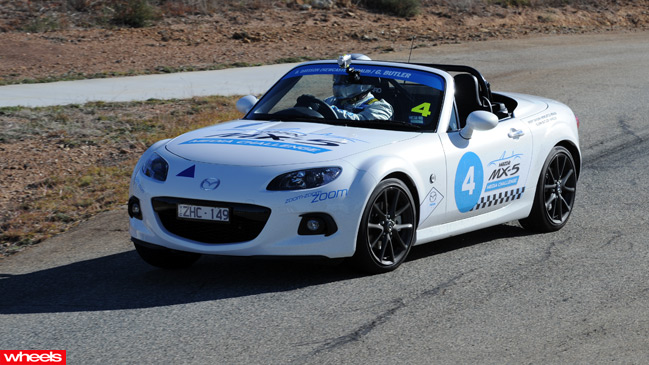 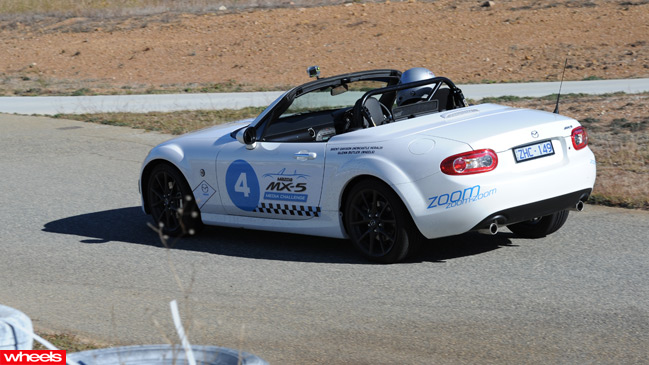 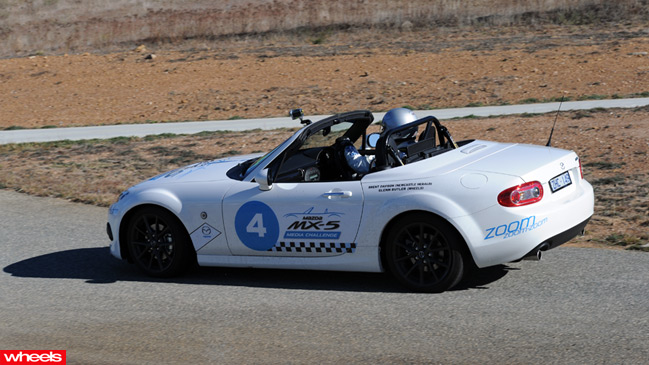 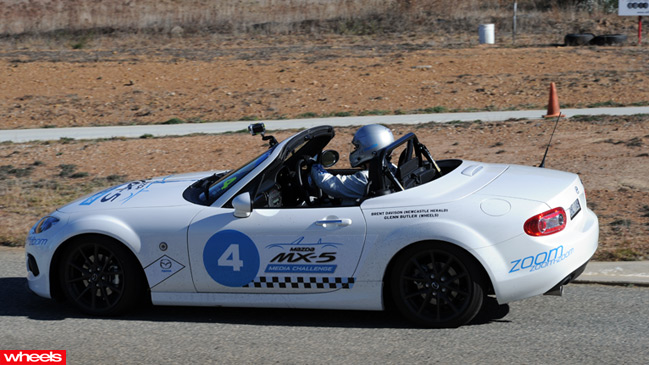 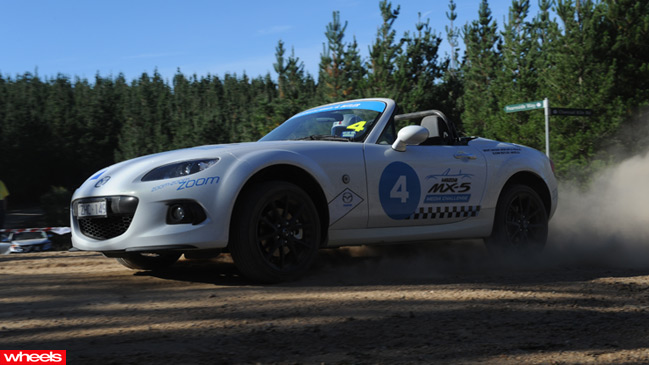 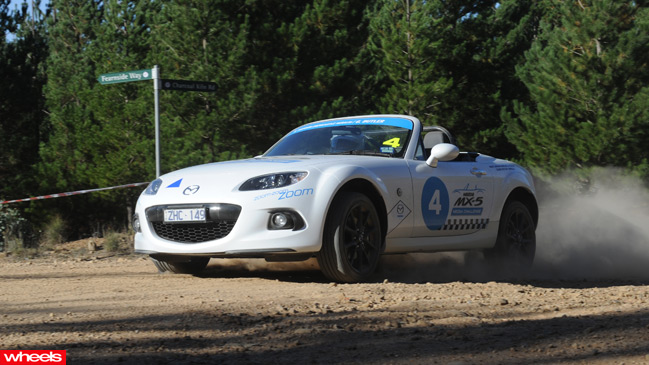 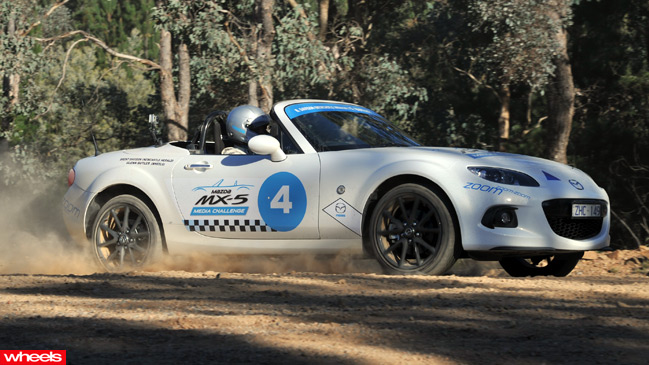 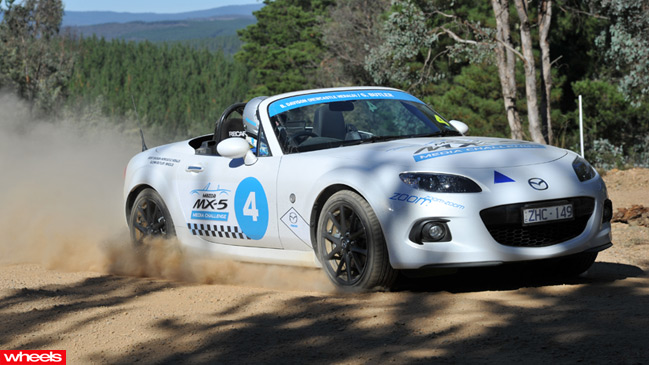 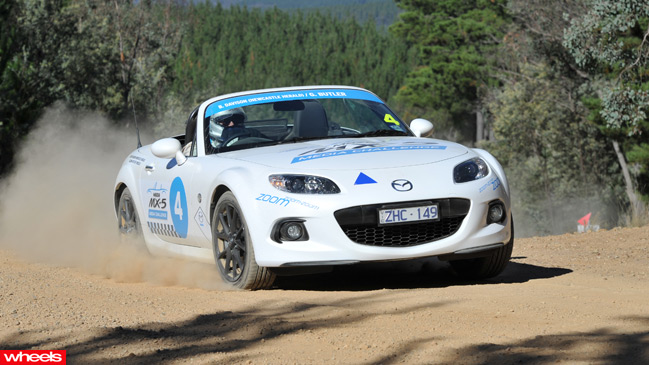 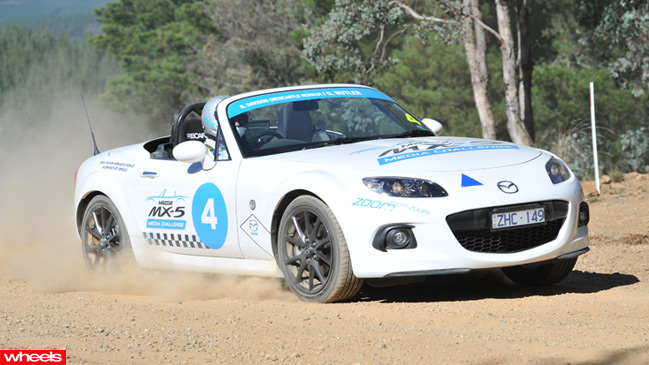 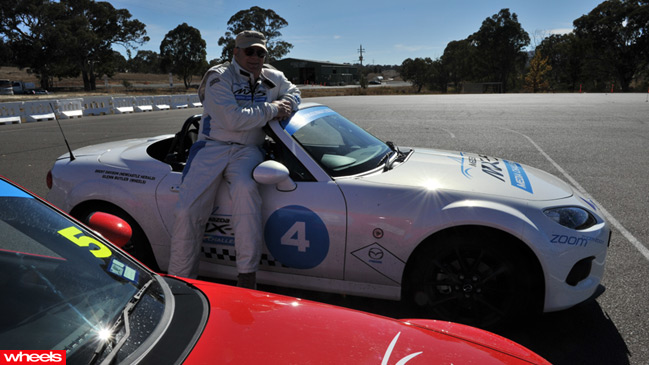 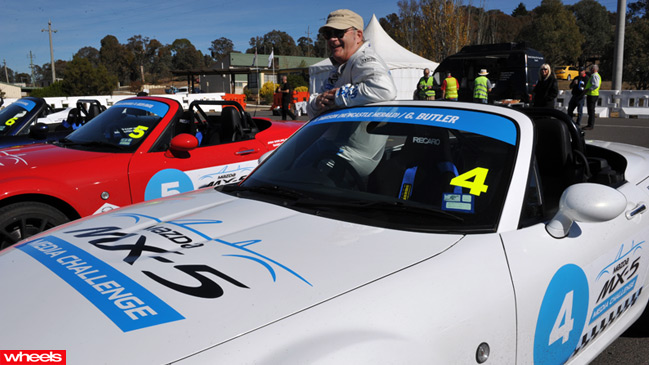 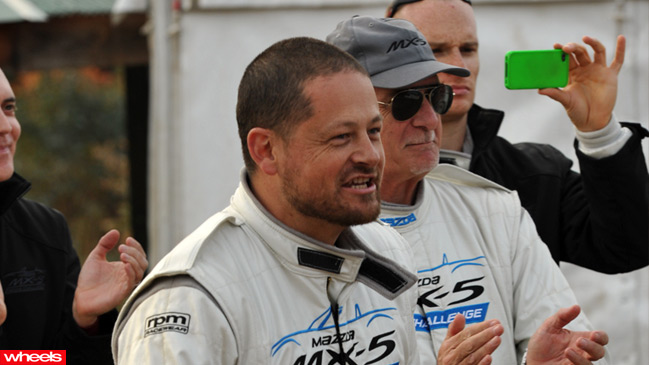 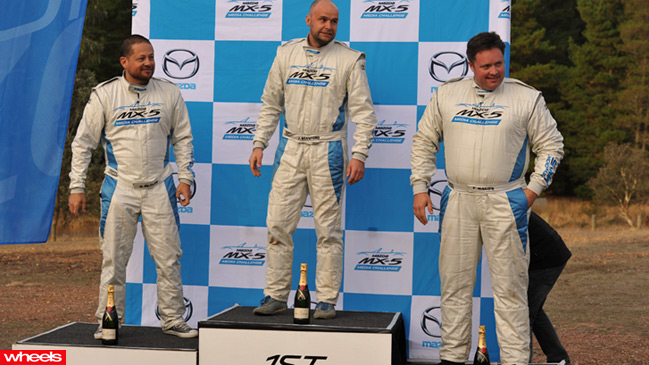