FOR diehard Holden fans, the acrimonious split between the General and Peter Brock was a tragedy akin to their parents suddenly announcing that daddy won’t be living at home anymore.

Holden showed Brocky the door during a bitter dispute surrounding his fling with hocus-pocus resin infused crystals in the “Polariser”, a device fitted to the 1988 VL Director, and his insistence HDT cars would run better on deflated tyres.

But the fans continued to love the man behind a string of legendary Holden Dealer Team cars and Bathurst memories, even when he started racing BMW M3s. They were also sympathetic when he put his name and body kits to, of all things, the Russian-built Lada Samara just to keep his company afloat.

But the lingering sorrow turned to despair when, within months, the unthinkable occurred. Brock started messing about with Ford! 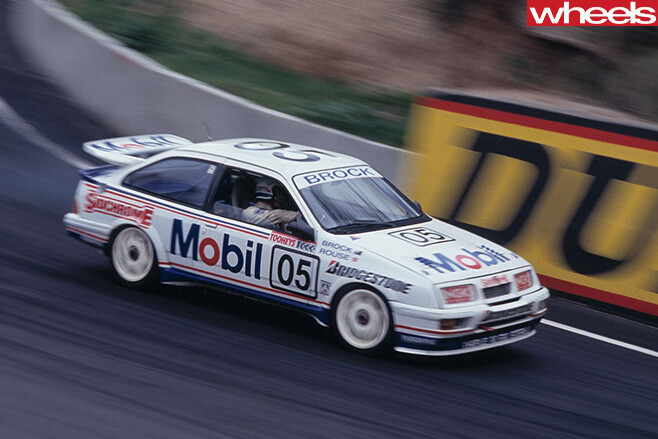 He would go on to race a Ford Sierra with his signature “05” on the door, even claiming pole at Mt Panorama in 1989. He didn’t finish, providing some consolation to Holden fans reeling from the fact that the top placed Commodore crossed the line in sixth place behind three Sierras and two Nissan Skylines. Worst still, Dick Johnson scored top spot on the podium.

After the bitter split with Holden, Brock set up a company called Austech Automotive Developments, and started doing up EA Falcons and the like because Holden refused let him have any Commodores.  Brock gave the modified Fords – the eighth generation of car to go through his workshops – the “B8” prefix.

The association with Ford wasn’t official, but the suits at Broadmeadows were more than happy for their cars to bear his name as it enhanced the brand’s performance credentials with very little investment on their part.

In 1990 he put his moniker on a range of tricked-up Fords called the Brock Executive Performance (EP) Series, which included cars such as the Brock (EA) Falcon, Brock Fairmont, Brock Fairlane and even a Brock Maverick  (a rebadged Nissan Patrol that was years ahead of the performance SUV wave).

The original pamphlet for the EP range would have been difficult enough reading for any Holden fan still enamoured with Brock. But the salt was well and truly added to festering wounds with a picture of him and his Mobil 1-liveried Ford Sierra with the caption: “Brock & Ford: A winning combination.” 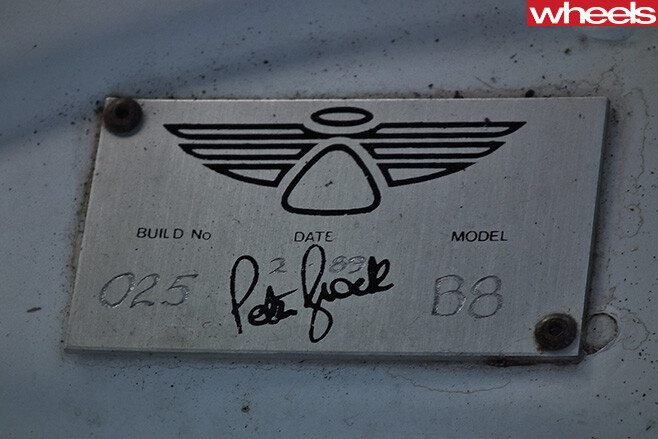 The Brock EP Fords weren’t exactly in the muscle-flexing league of his eponymous HDT Commodores. The marketing pitch referred to them as having “Subtle sophistication … that’s the essential element of my exciting new range at Brock Performance Fords.”

They came in three levels:

The Maverick EIII didn’t get the spoiler, but did get other extras including 15-inch alloy wheels and RV sports tyres; colour keyed enhancements including grille, bumpers and wheel arch flairs and an optional “personalised bulbar”.

At least five Ford Telstar TX5s (a rebadged Mazda 626) are also believed to have worn an EP badge.

Even today, with unique Aussie cars of the era keeping auctioneers’ kids in private schools, they aren’t the most sought after of collectable classics. You can get B8 EA Falcons for around $10,000 – compare that to the $75,000 you’d have to fork out for a half decent ‘Blue Meanie’ VK Group A Commodore.

However, Brock did whet Ford’s appetite for a performance arm which set the groundwork for its relationship with Tickford Vehicle Engineering from 1991 (which had a very similar winged logo to Austech). This affiliation spawned a new generation of hot muscle cars and led to the Blue Oval’s official return to motor racing via Ford Tickford Racing. A decade later, Tickford morphed into the equally successful Ford Performance Vehicles, which produced the type of cars that Ford could only envy during the HDT era.

In the lead-up to the 10th anniversary of his untimely death, that is one Australian motoring legacy left by Peter Geoffrey Brock that gives Ford aficionados a cause to celebrate.