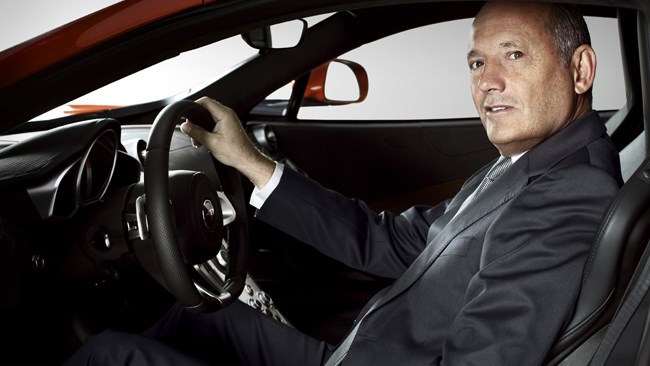 60 minutes with the executive chairman of McLaren Automotive isn’t going to be cheap.

You’d need both a heavyweight accounting degree and unprecedented access to McLaren’s books to work out exactly what an hour of Ron Dennis’s time is worth.

But with the Sunday Times Rich List estimating his net value at A$154m you can guarantee that 60 minutes with the executive chairman of McLaren Automotive isn’t going to be cheap.

Yet for this interview he gave us nearly two and a half hours of exclusive access. In an industry where you often have to bid months in advance to get 20 minutes with a big hitter, that’s a refreshing change. But then, Ron Dennis does have plenty of record to set straight.

The raw facts of his career are impressive enough. Dennis was an F1 mechanic at the age of 18 and was heading McLaren by his 33rd birthday. He took the team to seven constructors’ championships and 10 drivers’ titles, managing the disparate talents of Alain Prost, Ayrton Senna, Mika Hakkinen and Lewis Hamilton along the way.

He also led McLaren into road cars, signing off the creation of the F1 and then – a decade later – persuading Mercedes to entrust his firm with the development of its own vanity-hypercar, the SLR. Now he’s stepped down from running the F1 team to be boss of McLaren Automotive, intent on turning the company into a fully-fledged sports car manufacturer.

Oh, and in case you’ve forgotten, he was also on the bridge when McLaren got hit with the biggest fine in the history of motorsport – the $100m levelled in the aftermath of the ‘Spygate’ affair.

With the exception of the nine-figure sanction, it’s a CV to rival that of Enzo Ferrari or Colin Chapman. But Dennis’s downbeat public persona has often led people to view him as being less than the sum total of his considerable achievements. His reputation has always been of a careful corporate player, sitting steely-eyed on the pit wall and carefully remembering to thank sponsors afterwards.

It’s an impression reinforced by his tendency, whenever a microphone is near, to give long-winded and cautiously-phrased answers to questions. The F1 paddock even coined an expression for it: ‘Ronspeak’.

But in his domain – the office that sits at one end of McLaren’s magnificent Technology Centre – Dennis is far more relaxed. Up close he possesses an intense, focused charisma that doesn’t come across on TV – and evidence that a dry sense of humour lurks somewhere in there. So how does he respond to criticism that he lacks passion?

“I wouldn’t say it was criticism, I’d say that observation would be a little fairer,” says Dennis, with a wry smile. “I can completely understand, but I can answer it simply: I’ve never seen an angry person effect good judgment. It’s a luxury you can’t afford because it makes you weak.”

The other strand of Dennis’s public persona is that of a driven perfectionist, a man who famously ordered the F1 team’s trucks to be parked in Grand Prix paddocks with millimetre-perfect precision.

“I always thought that winning races was just doing your job,” he admits. “After that it was a question of how did you win a race, how immaculate was the car, how polished was the driver? How did we present ourselves: did that constitute a good magnet to invest in us?”

Dennis tends to pause before delivering his answers. The next question – an apparently simple one – produces one of the longest hesitations: do you regard yourself as a Formula One fan?

“I was a fan of the challenge,” he says, carefully. “It’s totally and utterly addictive.” Another of the keys to McLaren’s success under Dennis has been his ability to develop and nurture drivers and engineers. There have been some notable failures – Fernando Alonso’s tempestuous year (2007) with the team probably the best example. But does Dennis agree that his ability to spot talent – including that of his successor as F1 boss, Martin Whitmarsh – has been vital to the team?

“All you’re describing is one of the qualities you need to have as an entrepreneur and if you asked me what I wanted written on my tombstone I’d say ‘Ron Dennis, 1947 to so-and-so, one of the world’s greatest entrepreneurs’, not anything to do with motor racing.

When you harness talent, by being persuasive, or offering better working conditions, or promising people levels of commitment they might not have experienced before, then you are being entrepreneurial. What you’re doing is putting together the components of success.”

Time to skip to 2007 – McLaren’s nightmare season. Schumacher had retired and McLaren had a strong car and what looked like the dream combo of world champ Alonso and fancied newcomer Lewis Hamilton. But then McLaren’s chief designer Mike Coughlin was discovered in possession of a 780-page Ferrari technical dossier that had been passed to him by Nigel Stepney, a senior Ferrari mechanic.

The scandal threatened to destroy the team – although Dennis continues to argue that no Ferrari DNA had leaked into the McLaren design – and led to the imposition of that record-breaking fine by the FIA. Dennis’s face clouds when I ask for his version.

“We had someone who was in a senior technical position who made some very unwise decisions… there was just a phenomenal naivety and a belief that this was quite common and acceptable. It was clearly two people looking to move as a unit, that’s widely known and well documented. It was never something that he or anybody else did to further the competitiveness of our team.”

Dennis does admit that the espionage scandal had a direct effect on his long-planned decision to step down from managing the F1 team – he deferred it for a year. “It was so unpleasant I just didn’t want to stop participating at that point.” But now Martin Whitmarsh has taken over as McLaren’s racing boss and Dennis is giving his considerable attention to the company’s new project – establishing itself as a sports car manufacturer with the new MP4-12C.

“Why do we want to become a stand-alone automotive brand?” asks Dennis, his body language loosening as he moves to a favourite subject. “Because history shows the alternative is that you fail. In ’66 I stood in the pitlane in my first Grand Prix, Mexico City, and the only two brands in the pitlane then that are in the pitlane now are McLaren and Ferrari.

You can see that manufacturers who do not have Formula One as a core business inevitably have to move in and move out according to the pressures and the commercial realities that they have on them.”

Although intensely proud of the McLaren F1, Dennis admits that its limited production (only about 100 of the planned 300 cars were built) meant that it was “…a program, not a car company”.

“All of the lessons behind our automotive company have come from our experience of producing the SLR and working with Mercedes-Benz,” he says. Dennis also insists that the final split from Mercedes – with its purchase of the Brawn team – was amicable: “…this is one of those occasions when everybody involved got out in a win-win situation.”

Barring the distraction of the SLS, Merc’s own SLR-lite supercar spoiler, McLaren’s target is unashamedly Ferrari. The company plans to produce a range with three models, all built around the same carbonfibre tub, with exclusivity guaranteed by limited numbers.

“We never see our production, even in our wildest dreams, going over 5000 units a year,” says Dennis. “Our view is that this is a market which exceeds 100,000 cars a year and our ambition is to achieve three-and-a-half to four percent of that market on a regular basis.”

It’s time to wind things up. And there’s a question I’ve been dying to ask: Does Ron Dennis feel regrets? He gives another carefully considered, but clearly heartfelt answer. “You sacrifice a lot to be really good at what you do, not just in sport but in all business. You have to do what the job takes and very often that takes you out of your comfort zone… I think I did a pretty good job at integrating my family into my life and my business and vice versa, but obviously as I’m separated from my wife, I didn’t quite get that right.

“If you ask what’s the overwhelming thing I regret, it’s that people have had reason to question my personal integrity or commitment to running the company in an honest way. But, by and large, I look back on my career to date, which is a long way from being finished I might add, and feel very comfortable with the decisions I made.”

So how would he respond to a hypothetical comparison with Enzo Ferrari? “To use my name and Enzo Ferrari’s in the same sentence – I couldn’t possibly get my head around it… no one individual ever achieves anything unless he’s surrounded by competent people who gain their own satisfaction from what they do, and who want to be part of the making of history. And I’m just that, I’m a part of it. But I will never take sole responsibility for the success of McLaren because it’s never about one person.”

And there’s the addition to Ron’s ‘great entrepreneur’ epitaph: he was, and will always remain, the ultimate team player. 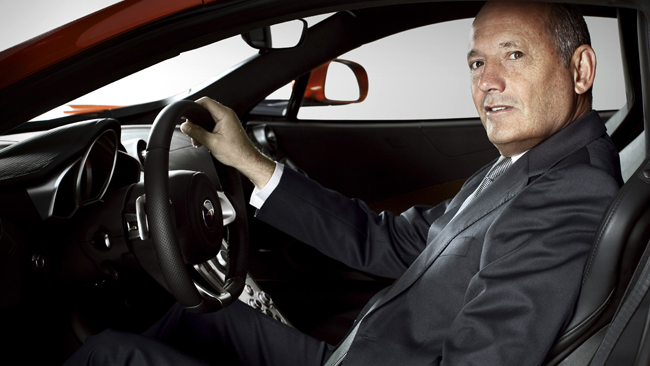 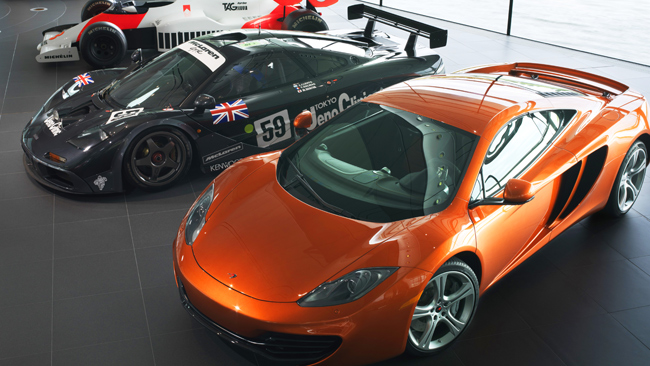 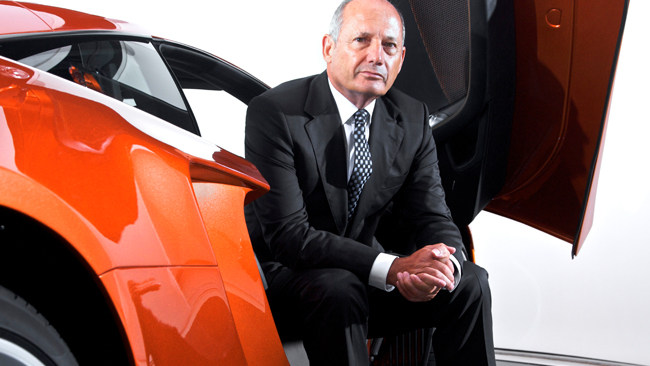