IF YOU want the world to notice your new bantamweight electric self-driving concept car, then forcing it to share the stage with one of the most eagerly anticipated and fastest cars the world has ever seen might not be the wisest strategy, but that’s exactly what Daimler did in Frankfurt last year.

Immediately after Smart presented its Vision EQ ForTwo through the medium of a Broadway style musical, Mercedes-AMG categorically stole the show with its sledgehammer Project One hyper-hybrid in a shameless display of brawn over batteries.

In the wake of a jaw-dropping 1000kW Formula 1-engined monster, piloted by none other than F1 ace Lewis Hamilton, how were we supposed to remember a diminutive, silent little buggy that didn’t have a driver at all? 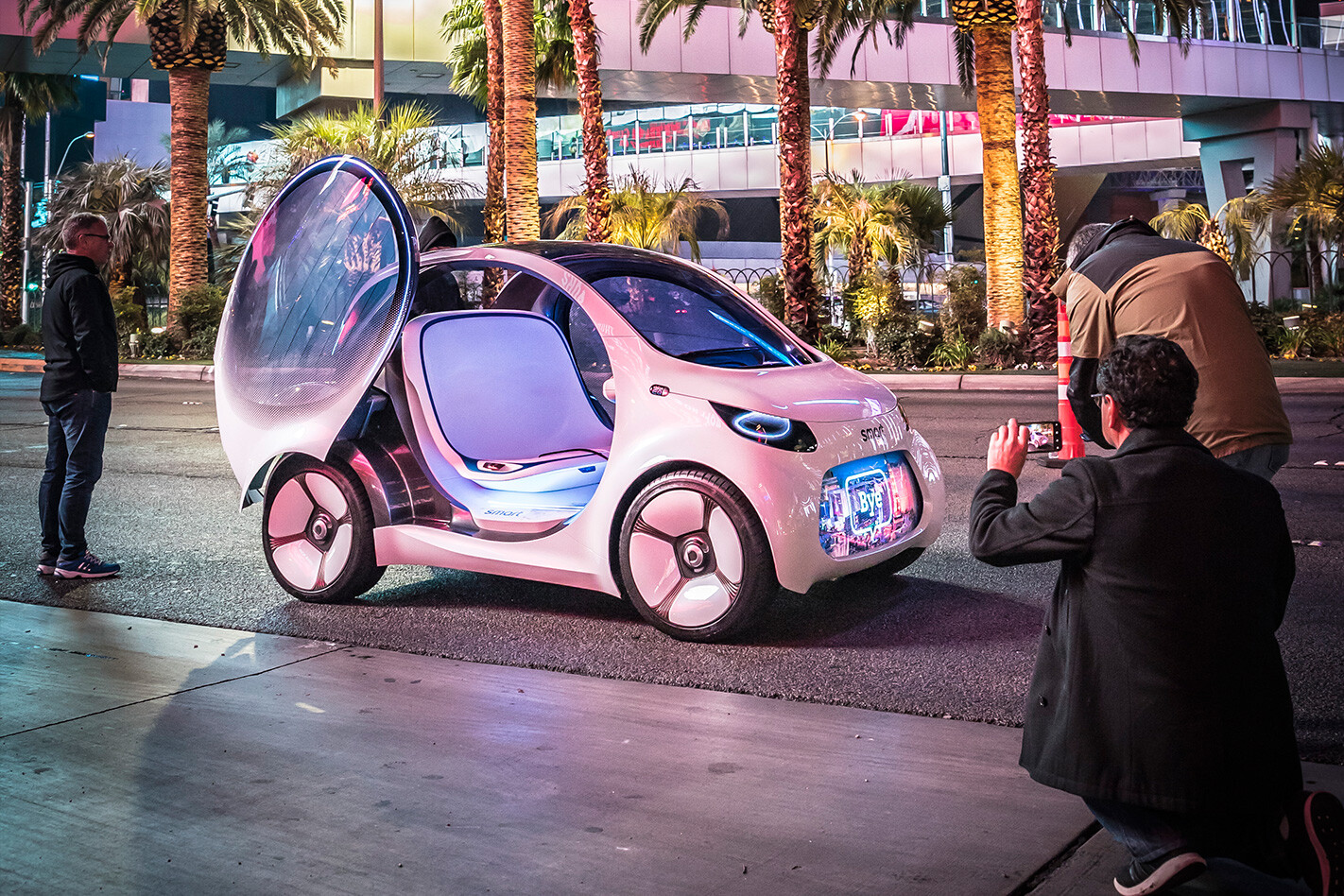 But Smart has had a second crack at the EQ ForTwo’s debut, this time in an environment far more conducive to vehicles that conceptualise self-driving technology, ride-sharing and emission-less drivetrains, and this time we went along for the ride.

Generally speaking, if you accept an invitation to a darkened multistorey car park late one night in Las Vegas, it’s likely you are about to be involved in something that will ruin your chances of a career in politics, but if the invitation comes from Smart during the Consumer Electronics Show week, you’re a bit safer.

I was met by the grinning (and winking) face of the car I’d watched disappear in the shadow of the Project One just weeks before but, in a dimly lit parking lot, the Smart Vision EQ ForTwo’s brilliant white facade and immersive lighting dominated the space. 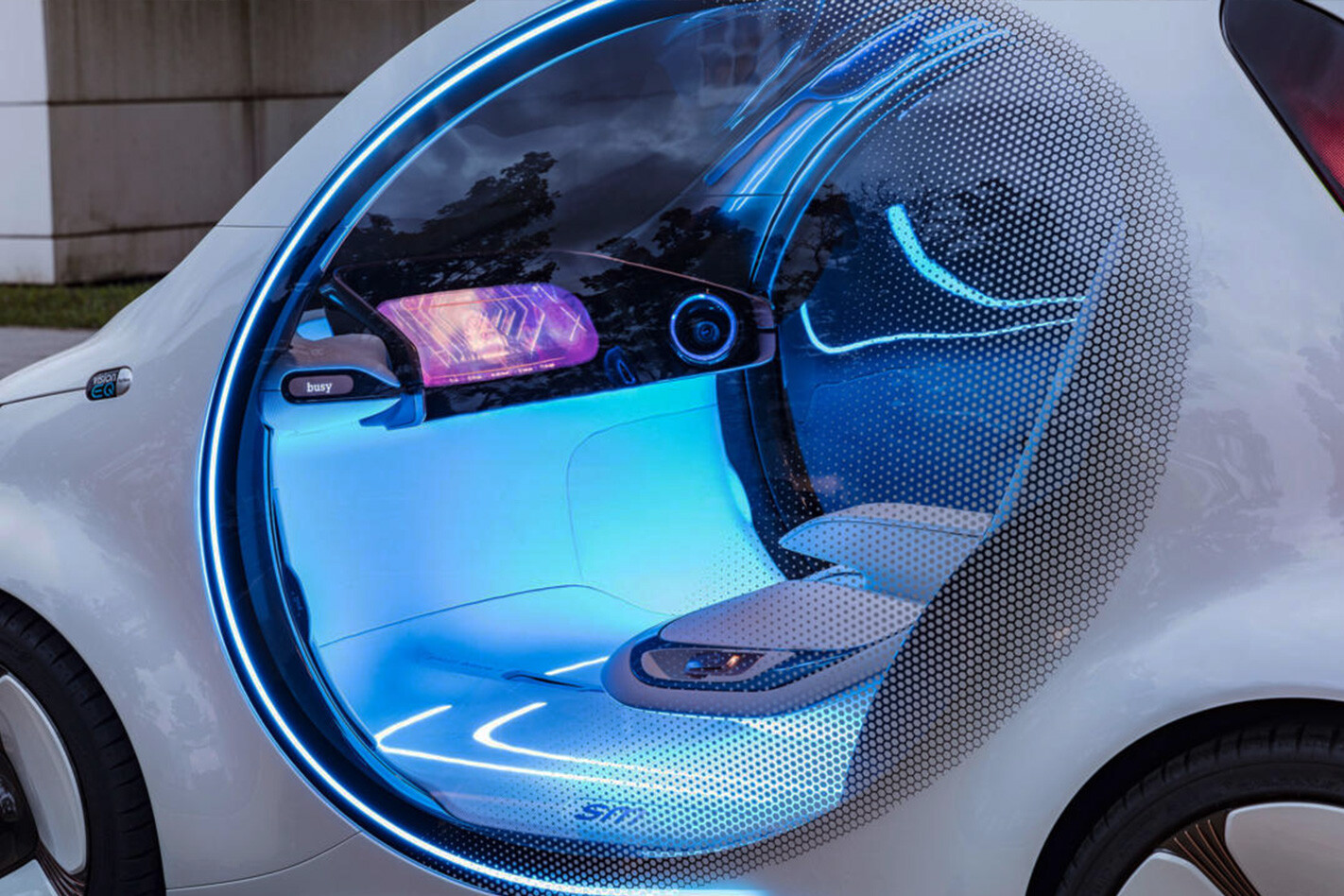 Its clam-shell side doors popped open and the ambient interior glow welcomed me inside where I found, well, not a lot actually. The EQ’s cabin is incredibly clean and simple with only a wide screen breaking up the sea of white leather. No controls, no buttons, just two seats and a display.

The idea behind Smart’s concept is that what the car doesn’t already know about your journey – pre-loaded by your smart device – is simply updated with conversational voice commands. Imagine an Uber minus the driver and free water.

But Smart’s vision of the future takes the concept further and coordinates with other users wanting to travel in your vicinity. The whole idealistic notion of sharing a car you don’t own with a person you’ve never met is a little hard to comprehend, especially when it wasn’t that long ago that taxi drivers were sealed into protective Perspex boxes, but the concept still has merit. 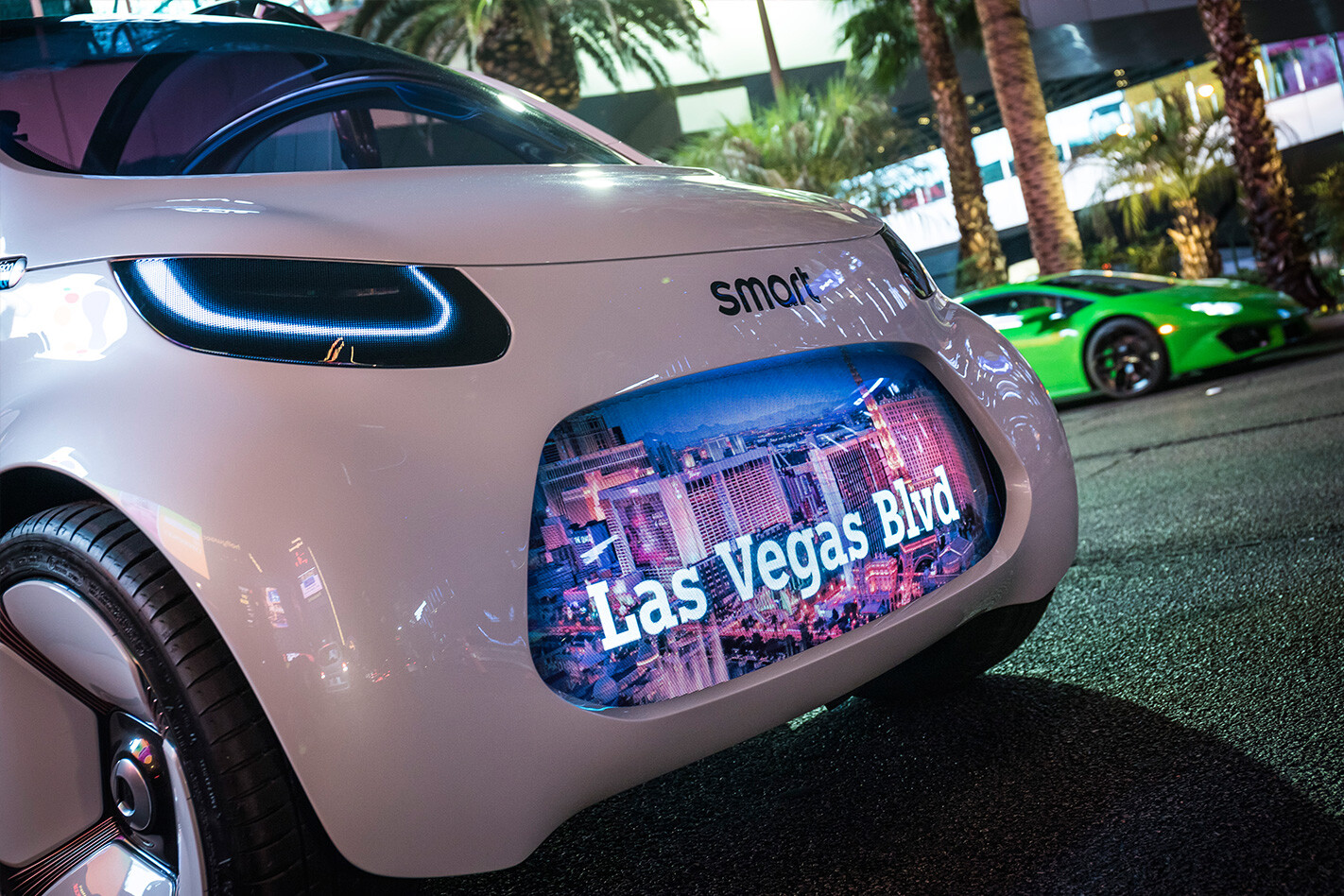 If young people really are more interested in social media and online dating than learning to drive and owning a car then the Vision EQ might be the perfect solution.

A short ride around a car park and then on to the permanently bustling streets of Las Vegas was a revelation on two counts.

Smartphones are rapidly becoming the only possession we need. Not only are they a multi-platform communication device, they are also a camera, computer, credit card, your house keys, personal organiser and fitness trainer, PA and entertainer. But they can’t yet physically take you anywhere. 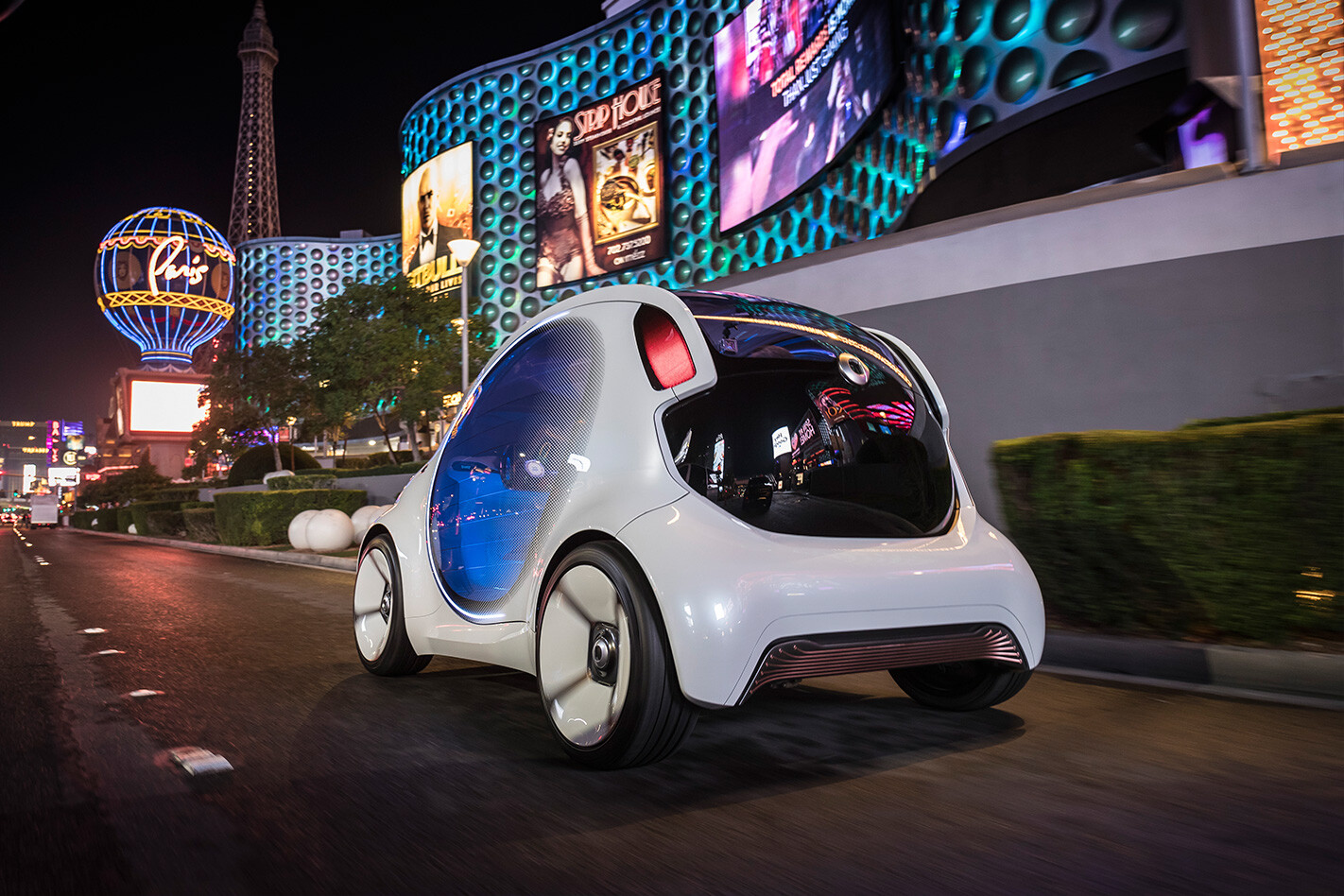 A production version of the Vision EQ would be a wheeled smartphone and that’s an exciting future to consider.

Secondly, our first ride aboard a self-driving Smart highlighted just how quickly the absence of a driver becomes normal.

Okay, it wasn’t hard to spot a man standing at the roadside doing his best to conceal a very complicated-looking radio controller, but the concept demonstrates how readily humans put their faith in a machine that is not being controlled by anyone on-board and, as autonomous technology advances, that trust will be increasingly warranted. 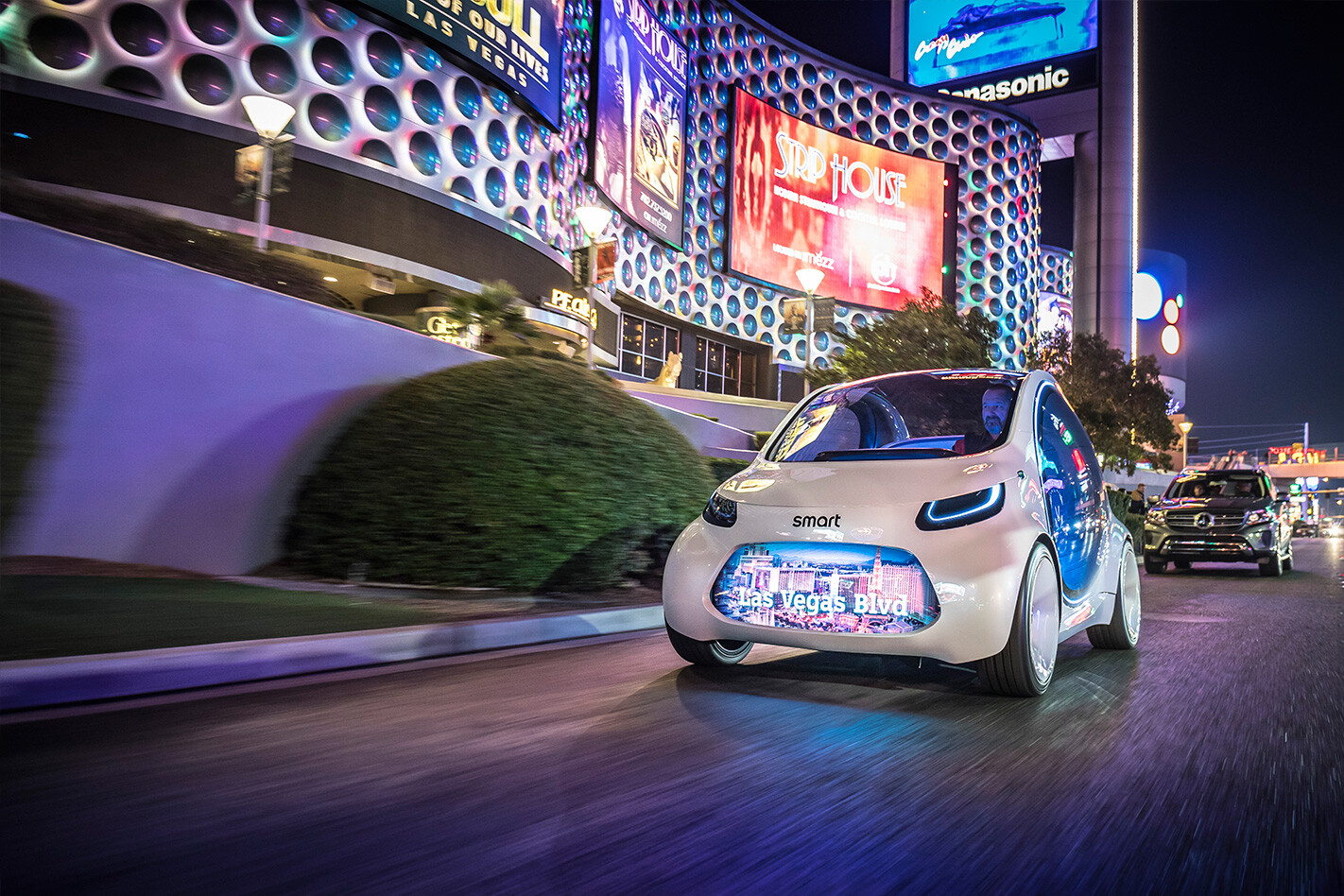 The most notable thing about my Smart ‘autonomous drive’ was that it felt surprisingly normal and definitely relaxing. I don’t want to see a world where I can’t drive a 500kW combustion-powered brute if I want to, but I am comforted to glimpse a future where people who see driving as a necessary evil won’t have to if they don’t want to.

As the evening wore on, a wheeled Stormtrooper helmet with no-one driving drew quite a crowd. You could argue that Lewis Hamilton at the wheel of a multi-million dollar AMG might pull a bigger audience just as it had in Frankfurt, but the chances of realising that dream for yourself are slim at best.

Sharing an electric autonomous car with a stranger may also seem unimaginable at this stage, but thanks to Smart’s vision, a brilliant concept and a little magic, that reality is probably closer than you imagine.