How much power is too much on ice? Wheels joins HSV in the New Zealand snowfields to find out

How much power is too much on ice?  Wheels joins HSV in the New Zealand snowfields to find out.

BRAKE! Brake! Brake!” We’re sliding backwards in a bright green HSV GTS towards a snow bank after trying to do a 360-degree spin in the 6.2-litre V8-powered sedan – on ice. The roar of the engine as it bounces off the rev limiter drenches our ears because we’ve flattened the accelerator pedal, and the spin has carved up the ice as the green monster leaves us whirling in a cloud of white powder. Only our instructor, on this occasion V8 Supercar pilot David Russell, seems to have a clue where we’re going. But I reckon he doesn’t really. 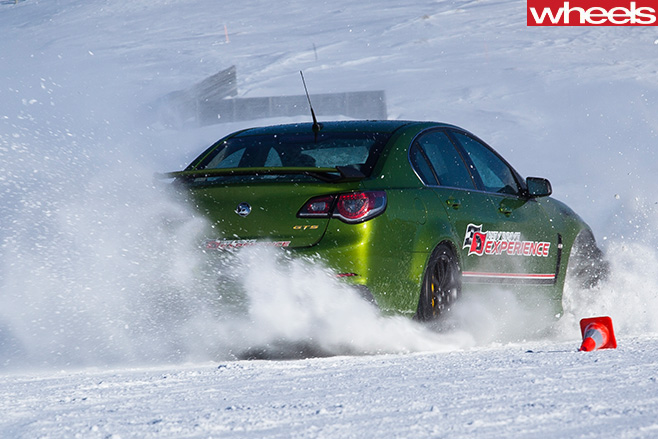 We’re at the inaugural HSV Ice Drive Experience in the snow-covered mountains at Cardrona, about an hour from Queenstown, New Zealand. Why? Because what’s better than 430kW, rear-wheel drive and snow. HSV has done drive days before, but nothing that combines the stunning backdrop of pristine mountaintops, perfect blue skies and bold slabs of HSVs to crash through the serenity. Queenstown is, after all, a mecca for adrenalin junkies, and where else would you be told by a V8 Supercar driver, “Don’t use the steering to turn the car; use only the throttle!”

“It’s all about the art of driving,” says Nathan Pretty, Bathurst 24 Hour winner and one of six V8 Supercar drivers past and present who happily, courageously, sit in with this group of foolhardy, lead-footed HSV owners and prospective buyers, and me. “If you use the steering wheel [to turn the car], you’re doing it wrong.” 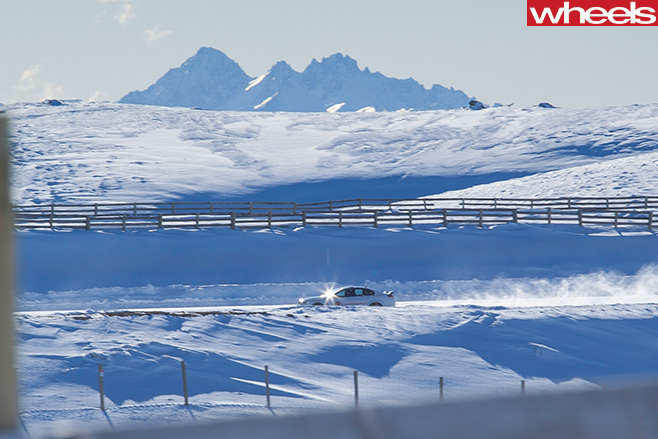 Rolls-Royce gives you membership of toffy clubs; Maserati offers Italian suits; HSV presents customers with the chance to go absolutely nuts, with tuition, laughter and gun tin-top drivers. It’s like Disney on Ice for adults, offering HSV owners something different while showing non-owners how the driver’s seat can be such an exhilarating place And it works.

“I’ve got to go out and buy one of these on Monday,” shrieks Kiwi resident John Kuyf from the wheel of a Clubsport R8 sedan as he drifts it sideways with racer Tony D’Alberto riding shotgun. “I’ll miss this horsepower if I don’t!” he says, laughing harder than Joe Hockey at Budget time. The grin on his face, and the $3700 he’s paid to attend, shows that the HSV marketing magic has won him over. “I’m not really a Holden man,” he confesses. “Put it this way – I’ve got a few Ford things. But I’ve changed my opinion of Holden lately.” 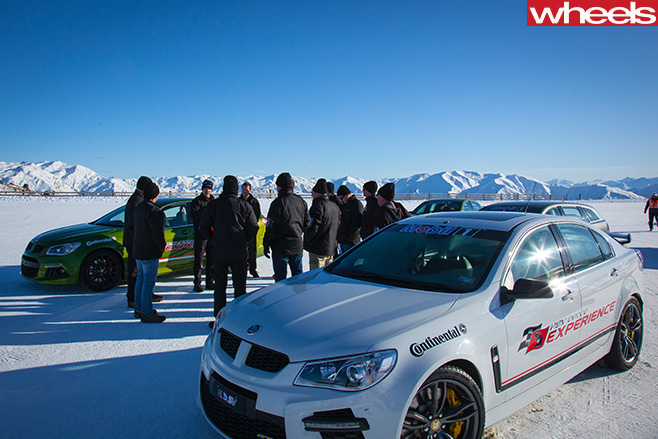 Same goes for Bill Stevens, from Melbourne, who has previously attended BMW drive days but is also up to his sixth HSV. “I mean, what do you do? Sit in the driveway and rev it?” he says wistfully as we huddle in the warmth of the lodge between runs. “When I lived in the ’States, I drove a Corvette, [but] the technology has come so far. Driving HSVs on snow is really challenging.”

Laughing at my note-taking is Greg Murphy, a four-time Bathurst winner who’s had more cameras poked in his face during the day than most. He’s never driven on ice and snow like this – despite being a New Zealand native – and reckons that makes things a level playing field between us. Yeah, right. 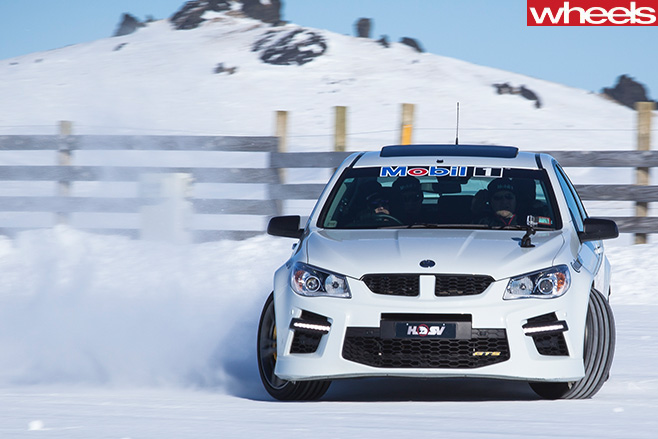 On a 280m-diameter circle, he effortlessly drifts his actual company car – a well-used white GTS – one-handed. Then I get into the driver’s seat. “I’ve never met a journalist who can drive,” he quips. “Well, you’re not about to,” I retort, and gas it all the way up to a wheel-spinning 45km/h. Having such fun at such low speeds is so incredibly satisfying.

As the sun melts the white stuff away, the surface is constantly changing, and it puts Fabian Coulthard, currently second in the V8 Supercar title chase, on the back foot. It also catches out some cars waiting for snow tyres – the only thing that has been changed in preparation for this event – when they couldn’t even make it up the access road. Have you ever seen a group of V8 Supercar drivers comically pushing a Clubsport? We hadn’t, either.

“How can you not love it?” says Mick Logan, who’s travelled from sunny Coffs Harbour. “It’s even more fun than I expected … and they’re actually doing something for us, aren’t they. I mean, it’s not a high-pressure sell, is it.” 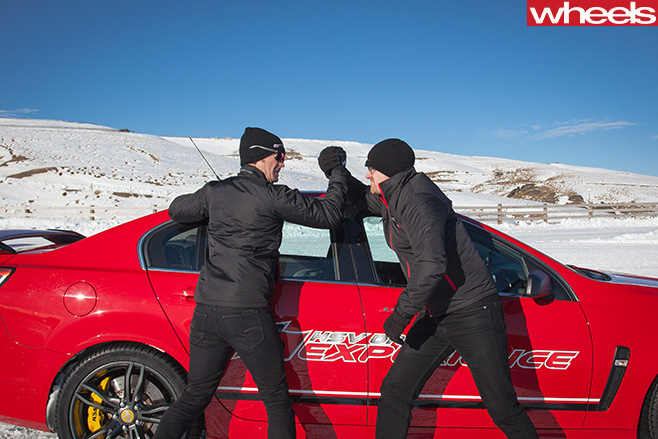 After an arm-wrestle with Greg Murphy (above, left) Damo (above, right) guns for victory on ice. it ain’t pretty.

The attempted 360 that has us sliding backwards in the green GTS is something we’ve worked up to after doing the basics: drifting in a circle, and slalom and clover-leaf motorkhana layouts. The combination of huge horsepower and snow makes this a totally alien experience. Only a week earlier, Holden came here to launch an all-wheel-drive Insignia – the car that replaces the Aussie-made Commodore once Holden stops local production – and I can’t help but feel sorry for them. What’s more fun, an Opel or a stonking great rear-drive V8? I can’t imagine anyone choosing the former for a spirited session on ice.

What’s hugely refreshing is seeing supremely talented drivers make mistakes, laugh, adapt, then get the hang of the conditions as we mere mortals try to do the same. The pros work it out quickly, and some of the punters are surprisingly impressive. You’d be amazed how many CEOs can do a reverse-throw on their first attempt. 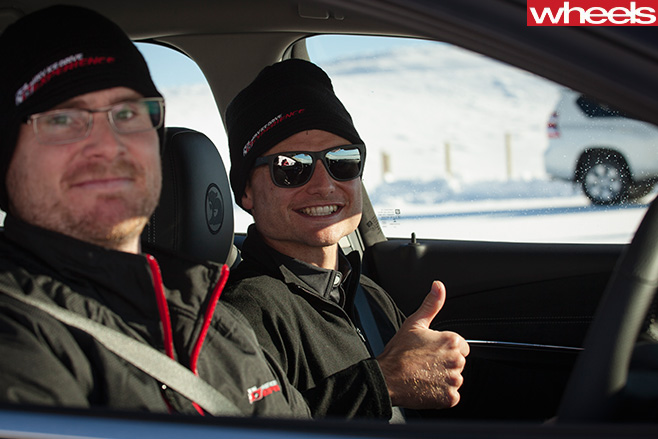 The iced-up sections have no respect for reputations or Bathurst wins. They’re instant trouble, with zero traction and so randomly located that, as you’re about to high-five a golden run, it all turns to mush in a backwards heap. Game over. Try again. “I didn’t think the snow would be so inconsistent,” says V8 racer Tim Slade. “That’s what makes it so hard.” 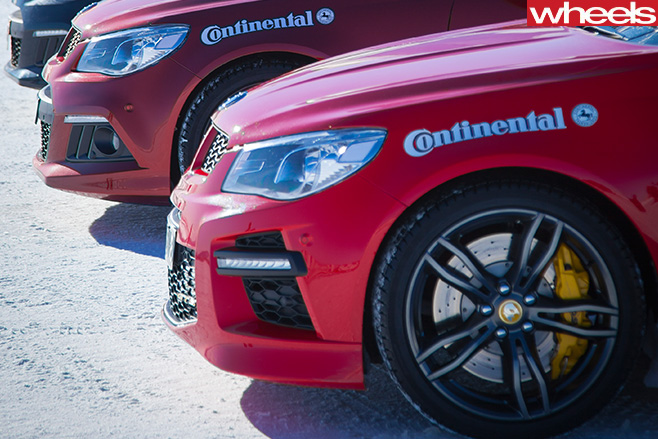 Shedloads of grunt, massive tyres and absolute hoons... Yet the key is to tip-toe through the worst of it to keep the vehicle under control. Then, once back on the snowy parts, unleash huge rooster tails. It’s impressively graceful to watch.

From the driver’s seat, it’s all about anticipating the slide, plus delicate throttle control. And that’s something I simply can’t get used to. Murphy laughs at me for being a lead-foot. “Okay, dab it; dab it; lift-off; okay, back on the throttle – too much!” We spin. Again. And again. And again. You know what? I don’t care. I can’t remember having this much fun in a car. 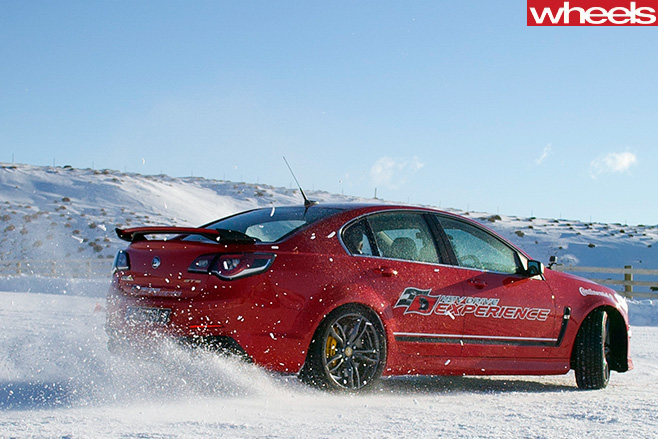 While it must be immensely satisfying to execute a course perfectly – something I came close to only once in dozens of attempts – even making a fool of myself was a hoot. These cars aren’t made for snowy conditions, but driving them here magnifies your inputs and shows where you’re clumsy, and where you need to get better.

“That’s why it’s so good – you cannot master it,” says Lincoln Burns, who runs the show. “That’s why the instructors love it; it’s a chance to test their skillset.” 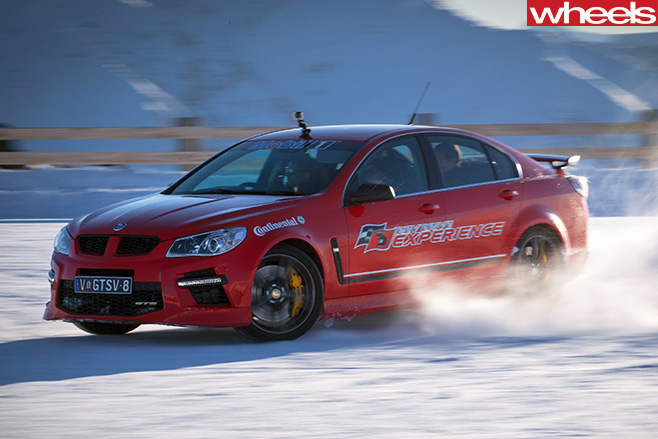 HSV confessed to Wheels that it doesn’t make money out of these days, so why do it? “This is one of those experiences that you do once in your life,” says Burns. “It’s all about something they’ll never forget.” And that memory will have HSV stamped all over it.

We race Murph... and lose

“I WAS going to say ‘Welcome to New Zealand,’ but if you’re gonna be like that…” says Greg Murphy as we rag each other in preparation for a race, on ice. Never has a motor race been held at such slow speeds and high revs. The cars themselves are completely stock, apart from brilliant Continental marshmallow-soft snow tyres (without studs). And when Murph has the same car and tyres as you, you’re pretty much stuffed when it comes to chasing victory. Check out the video at WheelsMag.com.au/TV.

THIS winter playground is officially the Southern Hemisphere Proving Ground, built on more than 400 hectares of former ski fields for automotive manufacturers to conduct winter tests. There are well-cultivated ice sheets on which to slide, manicured fields of powdery snow, and a huge circle tailor-made for drifting. Many car companies and tech organisations use the venue for cold-weather testing, and to test tyres and electronic systems. We saw a few heavily camouflaged cars the day we were there, but were banned for taking photos.