If this country adores anything as much as meat pies, sandy shores and public holidays, it’s large, fast four-door sedans. Yet the options are thinning.

We've sadly so-longed the Falcon and after the Commodore's also bid us a tearful farewell, moving five with a V8 will only be done by The Very Expensive.

But even there, well into six figures, a dark cloud broods over the V8 sedan – or, more accurately, it crackles with electricity. Tesla’s Model S is everything oil companies hate and early adopters love – all electric.

We’ve met the silent assassin on local turf before as a P85+; Tesla’s since replaced its range-topper with an altogether much mightier weapon, the P90D. 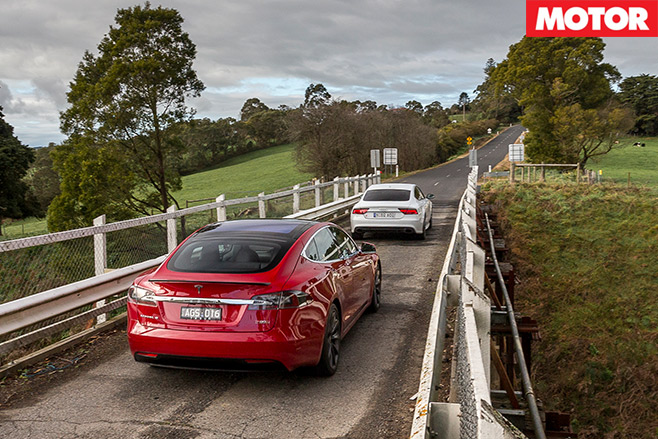 The ‘D’ adds an extra motor to its arsenal and combined with the rear unit, both can produce up to a staggering 568kW/967Nm. From rest, Tesla says it'll summon 100km/h in 3.3sec, making it the fastest accelerating production sedan… ever.

Better yet, the line underscoring its P90D badge denotes Ludicrous Mode, an option which allows the battery to flow more juice in peak conditions and cuts the 0-100km/h sprint to three seconds flat.

However it's not the only supercar-fast four-door. Audi’s RS7 Performance is fresh from a mid-cycle update and now brandishes some serious grunt, too.

Audi engineers lifted the twin-turbo 4.0-litre V8’s rev ceiling by 200rpm and snuck in an overboost function to sniff out an extra 33kW. There’s also an extra 50Nm when in Dynamic mode. All up 445kW and 750Nm is squeezed through its quattro system, propelling it to 100km/h from rest in a claimed 3.7 seconds.

Not enough to deliver a right-hook to the Tesla on paper, but here it's fossil fuel’s brightest-burning hope. Porsche has cleared the Panamera from dealers' shelves until the new one arrives. BMW’s M5 would be outclassed for grip, and while Mercedes-AMG's new E63 S claims 0-to-100km/h in 3.4sec, it’s not here until mid-2017.

However, while the Audi's claimed to be slower off the line, it doesn’t feel so at Heathcote's dragstrip. The only place where it fails to match Elon Musk’s rocket is traction. Two-stepping the torque converter from 2600rpm dumps huge grunt onto its Pirellis, and the rears especially struggle to soak it up.

It’ll wriggle and twitch before shuffling power forward to restore grip at both axles, proving much different to the all-wheel drive launch in the Tesla. Without the need to idle, or shift gear, the Tesla’s wheel speeds never have to play catch-up. So there’s no clutch or need for launch control, and you simply plunge the throttle to escape the line.

When you do, though, hold on and tell the kids to block their ears. Because the loudest sound they'll hear in a full-throttle Tesla will be expletives – yours. The acceleration doesn’t smash you like launch control in a GT-R, rather it builds into a neck-straining thrust as the motors spin up under full power.

Once the race gets rolling, however, the Tesla’s ferocity wanes as the Audi surges ahead. The RS7 takes off like a Tomahawk missile with seatbelts, firing through three gearchanges to hit the traps in 11.29sec, three tenths sooner, and a whopping 17.4km/h faster.

Even though the P90D's 3.36sec 0-100km/h run isn’t what Tesla claims (mind you, it was extracted with 52 per cent charge) barring a Porsche 911 Turbo, that’s faster than the last two fields at MOTOR's Performance Car of the Year. 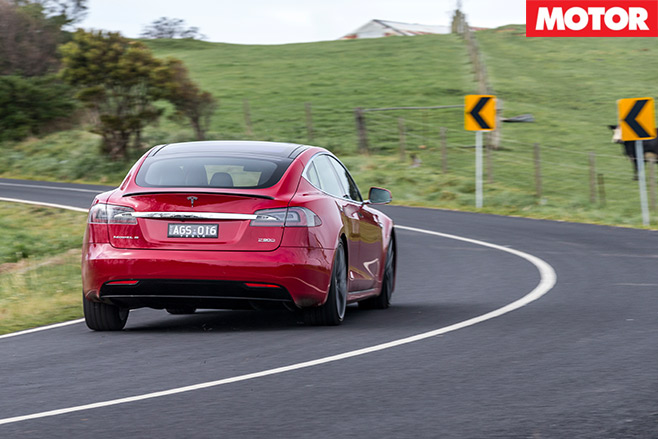 What's more surprising is how the Tesla feels on open winding roads. It slices corners flat and composed with huge grip, despite wearing modestly-sized 245mm/265mm front and rear Michelin rubber. The P90D's secret is the over 700kg of lithium-ion batteries living under its floor, gifting it a centre-of-gravity Formula One engineers would envy.

An obvious downside to this is the Tesla's 2300kg kerb figure. When 80-120km/h disappears in just 2.12sec, there's plenty of inertia to reign in, and while those relatively small four-pots are full of feedback, they aren't the most powerful items. You're thankful the motors chip in with regenerative braking.

With punch and grip in spades, the Tesla's devastating as a point-and-shoot weapon, almost transporting itself from one corner to the next. The front-end does feel a touch inert and the optional air suspension, which delivers a great ride, could also be responsible for its lack of agility, but these points are a small blemish on the face of impressive dynamics. 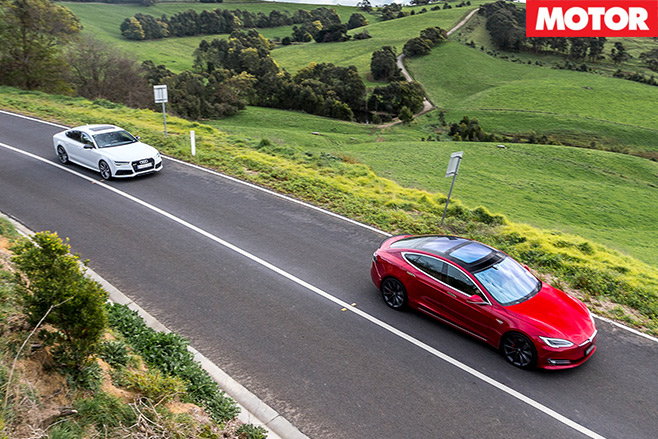 What we miss most, though, is noise and vibration, of the good kind. Its silence, cushier suspension and disinterested steering mean there are fewer cues for when you're nearing the limit, which makes it hard to want to attack any harder than seven-tenths.

Meanwhile, with a more traditional centre of gravity, the Audi’s higher rates of roll, pitch, and dive make it easier to read. Weight transfers enliven, rather than inhibit, its fun, thanks to the optional 'Dynamic Ride Control' that bins its air suspension for a fluid-linked steel-spring setup. You still need be mindful it’s a big car, but keep the brakes squeezed into a corner and the rear will happily enliven. And boy, those brakes.

Peering from behind the RS7's 10-spoke wheels are frisbee-sized carbon-ceramic discs. They don't bite aggressively, preferring a solid squeeze of the middle pedal before digging in, and proved no more effective during emergency stops from 100km/h than the Tesla. 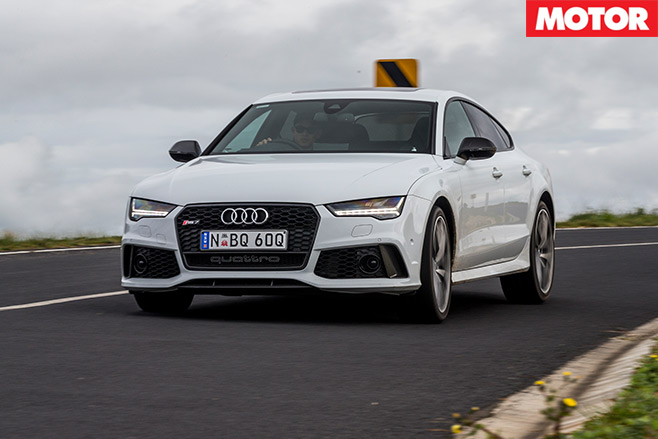 However, any feedback missing from the brakes is found at the Audi's tiller. It commands a much sharper front end and flows more information through to your palms. The variable rack's also deceivingly light, so it's easy to forget the heft attached to your steering inputs. Of these two limos, it's the track day pick, which says a lot about the crucial difference between them on another point.

The thought of zipping down to Phillip Island in the RS7, plundering around for a day before arriving home for supper, is a given. It’ll slurp lots of fuel, but it'd be a riot – especially with its carbon-ceramic brakes, trick suspension and locking rear diff.

You can’t say the same for the Tesla. Sure, it’ll travel two hours from Melbourne, but there’s no certainty you’ll return that day. Because the only way to charge a Tesla ‘quickly’ is with a Tesla Supercharger, so trips must be planned with military precision. 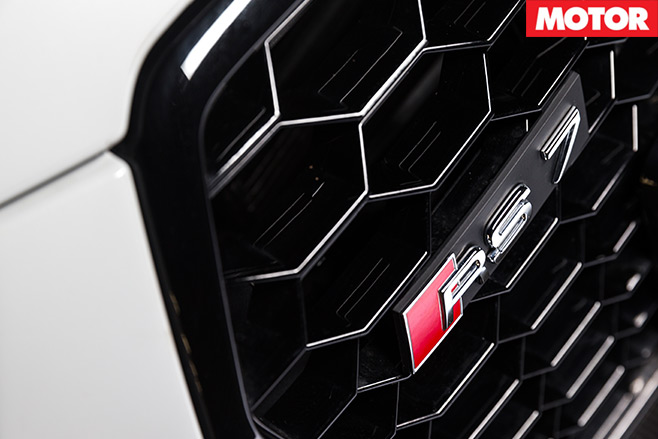 As of November 2016 there were eight Supercharger stations in Australia, half of them down the Hume Highway between Sydney and Melbourne. Tesla claims a Supercharger will provide up to 270km range in 30 minutes (80 per cent charge in 40 minutes).

With a special wall connector installed at your house you'll get a full charge from nada in five hours. With the 240V lead in the boot at any powerpoint, 10 hours. Track day? Grab a good book. Or two.

As a result most time in the Tesla on rural drives is spent worrying whether you'll make the next stop, or if you're using too much fan. Strict urban trips between a connector at home and work wouldn’t be a problem, and the Model S is a brilliant stab at electric transport, but at $281K as-tested you would've hoped range is something you'd never have to think about. Alas, electric cars still have some way to go. 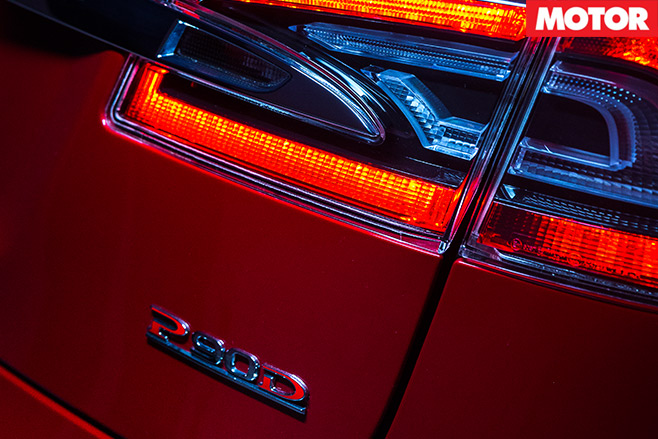 Our P90D's options list stretches long and Ludicrous Mode, for instance, is quite a sting as a $15K option, while ‘smart’ air suspension and premium audio add $3800 each. The heated steering wheel and seats cost $1500, and luxury like Nappa leather, a powered tailgate and interior lighting are packaged for $4500.

These things are taken for granted in the Audi. The blue stitched lever boot, steering wheel and seats, offset against carbon inlays, lift its premium vibe, while its 14-speaker Bose sound setup is up two speakers on the Tesla’s optional system. However, when the RS7 starts $50K dearer, it should be.

Back in the Tesla, Apple nerds will find the huge 17-inch touchscreen a cinch – and pinch – to use, far more intuitive than the Audi’s MMI, and the Tesla's controversial Autopilot system ($3800) is more advanced than anything we’ve tried. It’ll change lanes for you, and the way it scribes an arc through bends is science fiction stuff. 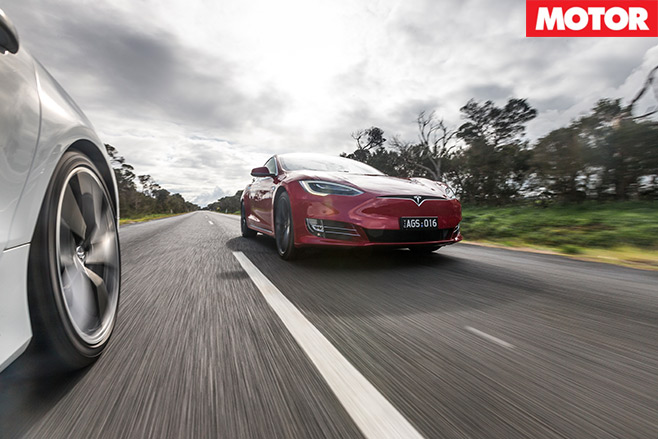 Bigger picture, though, we suspect there’s not much the P90D offers over lesser models. Besides mind-bending speed and more range, the carbon lip spoiler and red brakes are the only giveaways you’ve stumped up for the range-topper.

Sure, Tesla buyers aren't the superficial kind, but a big part of a performance car is how it makes you feel. Even by Audi standards, the RS7's looks alone will blip your pulse. Those 21-inchers, rear diffuser, Matrix LED headlights and scooped front bumper could part traffic like Highway Patrol under Code One.

On top of that, not only can the RS7 fling you and the in-laws to warp nine faster than any four-door on sale here, but there are more things to enjoy during the experience. The gruff burp on upshifts; or knowing hot gases flowing through turbos hidden a metre from you are responsible for its baritone growl. 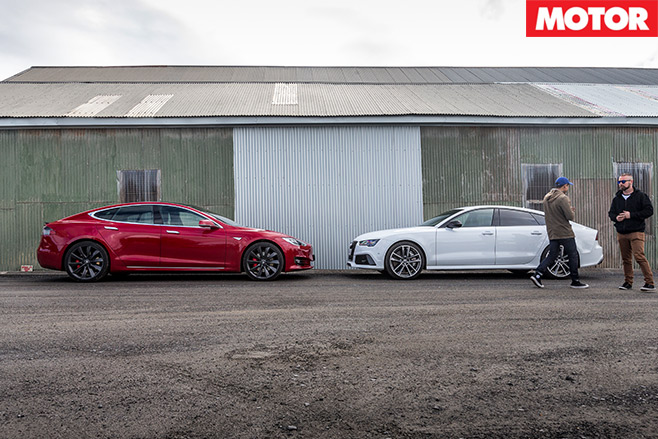 The P90D, on the other hand, doesn't trade on emotion. Rather, it feels like Tesla built it because it could. Imagine if the R8's V10 fitted in the base A7's nose perfectly, Audi built it and then dusted its hands. It didn’t sharpen the suspension, grip, or toughen its look to suit. It would feel unresolved.

Don't get us wrong, this mental Model S is seriously impressive. But the Audi even more so. Sharper, sexier, and more luxurious, it ripped three-tenths out of its claimed 0-100km/h time, virtually matching the Tesla to triple figures, before charging on to become the fastest production sedan we’ve ever tested.

Legislators the world over are looking to put the brakes on cars like the RS7 Performance; members of Germany’s own parliament have called for a 'ban' on new internal combustion engines by 2030. But while the Tesla Model S promises an accomplished alternative, for now we'll take the Audi. 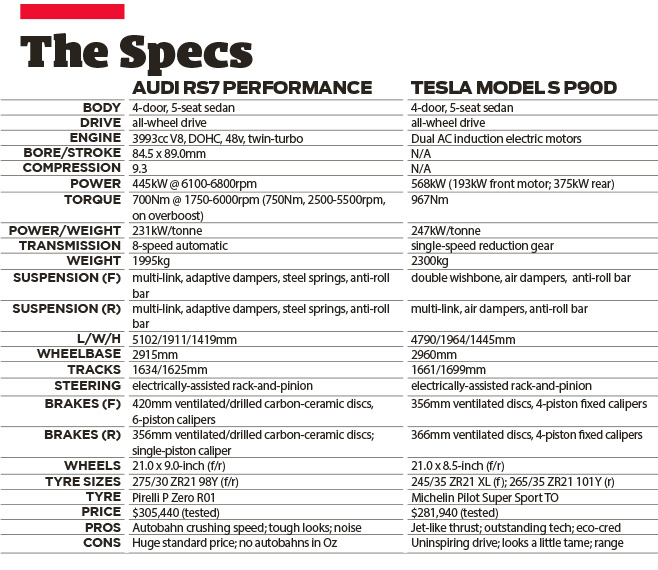 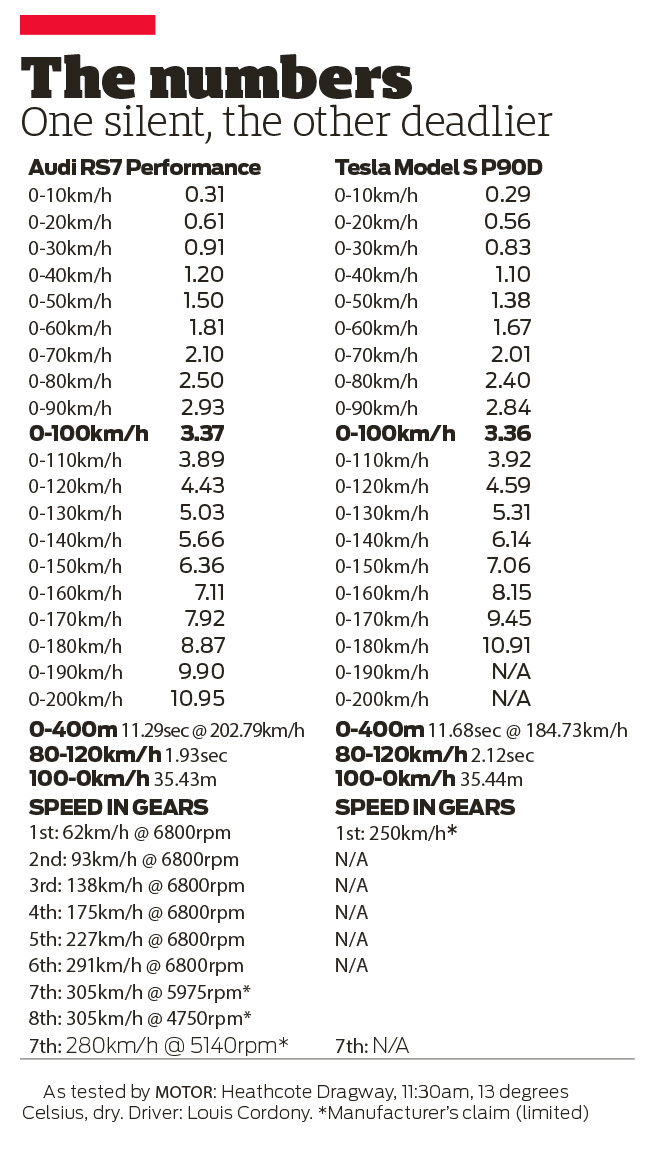 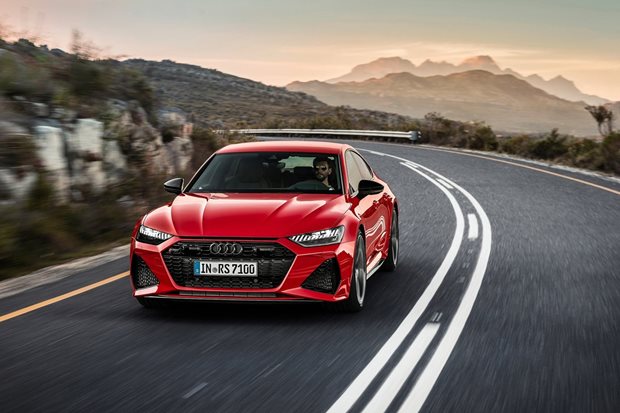 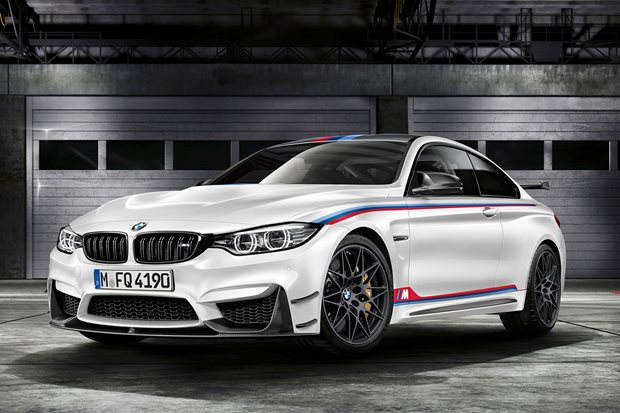