For the first time since the award’s inception in 1963, Wheels COTY will be branded with the year in which the award is announced, rather than when the testing took place. It’s a mild tweak to the world’s longest continuously running motoring award, one that now reflects the winner’s year of reign.

With prices stretching from $12,990 driveaway to half a million dollars, the list of eligible vehicles for the gruelling seven-day judging process is among the most diverse in the award’s 53-year history.

Only one will win. As editor Glenn Butler points out, COTY ain’t about giving everyone a gong, it’s about rewarding the best and highlighting the standouts.

“Yes, its purpose is to identify the Car of the Year,” Butler said, “but COTY plays a significant secondary role recognising the year’s exciting cars that had an impact on the broader market.”

In addition to Ford’s highly anticipated Mustang, the field includes Mercedes-AMG’s even more muscular GT S, with its twin-turbocharged V8, while BMW’s radical i8 supercar teams three-cylinder petrol power with electric motors for a 266kW carbonfibre punch. BMW has high hopes the i8 will defend its COTY crown, fresh from the controversy of the brand’s first win with the i3 electric car last year. 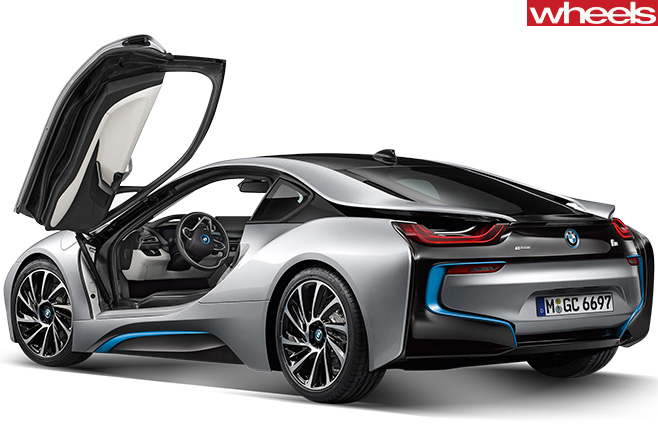 If you ever needed evidence of just how quickly the Australian car market is changing then this year’s influx of SUVs is it. For the first time, SUV nominees effectively match the number of traditional passenger cars, with 21 eligible new models, from 17 manufacturers.

Small SUVs spearhead the charge, with the new Mazda CX-3 and Honda HR-V leading the influx of predominantly on-road, high-riding vehicles. Then there’s the Jeep Renegade and its mechanical twin, the Fiat 500X, and the long-awaited Vitara replacement from Suzuki. Throw in Renault’s cute Captur and it’s a bumper compact SUV field that’s indicative of a market increasingly overriding tradition. 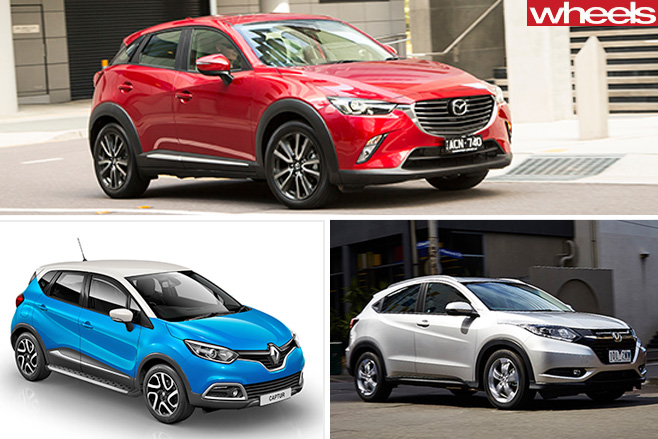 Stepping up an SUV size and there’s Hyundai’s impressive Tucson – fresh from a comparison victory – and the latest Subaru Outback. Kia’s Sorento also brings high hopes from a brand that’s never scored a COTY gong; the Sorento impressed in our seven-seat SUV shootout thanks to well-sorted dynamics and a quality interior.

There’s also an all-new nameplate in the form of fledgling Chinese brand Haval – one of 25 that could front Australia’s most experienced and hard-nosed judges – with three SUVs (H2, H8 and H9). Haval is almost unheard of in Australia, but it sells more SUVs in China (the world’s largest car market) than any other.

Our extensive list of SUV eligibles includes a host of luxury offerings in the form of the Mercedes-Benz GLC (a crucial new mid-size for the BMW X3 and Audi Q5) and GLE Coupe, the latter bringing some three-pointed-star flair to the category created by the BMW X6. Speaking of which, there’s also a new version of the X6, which refines the SUV-coupe formula.

BMW also has its new X1, complete with front-drive underpinnings and some Aussie design influence from Calvin Luk.

Audi’s second-generation Q7 makes the list, having shed 325kg of its substantial bulk to bring newfound agility to the sizeable seven-seater.

Land Rover’s Discovery Sport arrives with a famous nameplate wrapped in smaller packaging, but it’s the cleverness of this Freelander replacement that could make it a COTY dark horse. 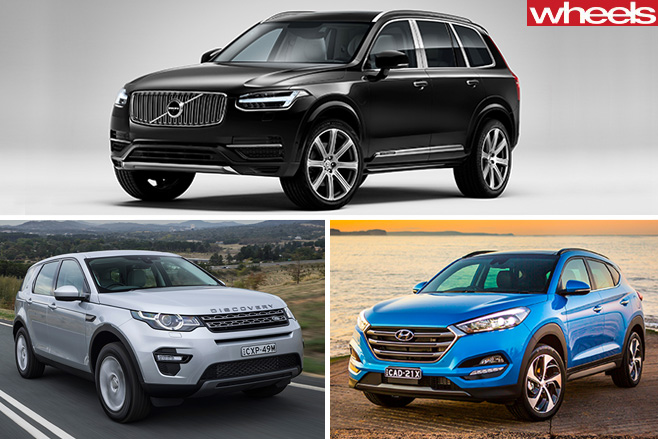 Volvo, too, is hoping its all-new XC90 – the first since the original some 12 years ago – can deliver COTY excellence. The Swedish seven-seater brings new thinking under the bonnet in the form of a range of four-cylinder engines, as well as one of the most advanced active safety systems fitted to a production car.

Rounding out our flood of SUVs are two designed with off-road conditions in mind.

The Ford Everest was developed extensively in Australia and is being produced in Thailand alongside the Ranger ute on which it’s based, while Toyota’s Fortuner – also the result of local engineering input – is a revival of the concept behind the once popular 4Runner, teaming new-gen Hilux mechanicals with a seven-seat body. 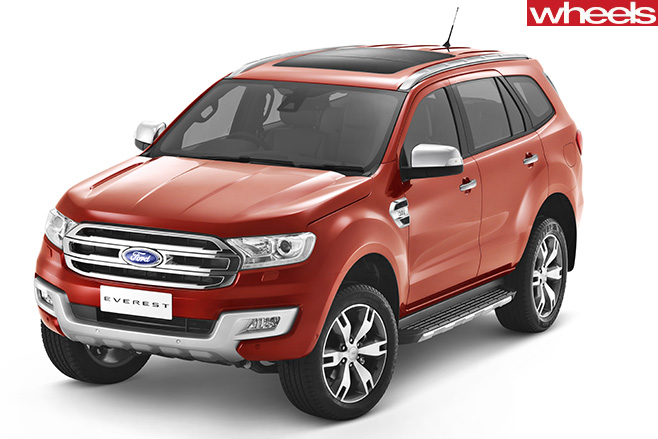 That Hilux leads a trio of utes eligible for COTY contention this year. It is all-new – Toyota says only the Toyota sticker across the tailgate is carried over – and refines the popular dual-cab formula increasingly used by families and as everyday vehicles. Can this more refined look and feel still convince as the ‘unbreakable legend’? It’s a big ask.

Nissan has its new NP300 Navara – an all-new iteration of the popular dual-cab, and the first ute in its segment to eschew rugged leaf springs in favour of more controlled coils at the rear – and Mitsubishi’s all-new Triton also makes the field.

From workhorse to track warriors, Alfa Romeo’s 4C is waiting patiently on the dummy grid. The super-focused carbonfibre two-seater is billed as the renaissance of an Italian brand that’s been flailing for decades. It signals a new dawn for Alfa and that momentum should carry through to the forthcoming Giulia that we’re already looking forward to featuring in next year’s COTY.

Other sporties include Audi’s third-generation TT – in both coupe and roadster guises – and the Lexus RC that comes with a rare (for 2015) inclusion of a naturally aspirated V8. 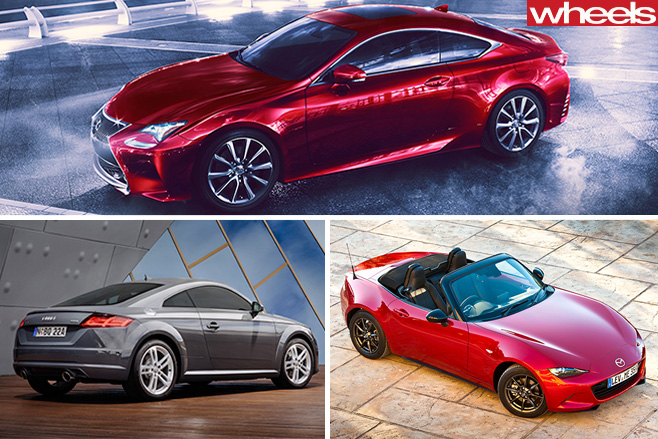 When it comes to cars with pedigree, though, few stand up to the COTY torture as well as the Mazda MX-5. A winner in 1989 and 2005, the simple yet beautifully executed formula of a lightweight, rear-drive sports car has long impressed against the stringent Wheels COTY criteria. Mazda’s renewed focus on cutting weight and doing more with less will surely please the judges.

The most expensive vehicle eligible for Wheels COTY 2016 is the Mercedes-Benz S-Class Coupe; the top-whack S65 AMG model – complete with a twin-turbo 463kW/1000Nm V12 – sells for $498,610, about 40 times more than our most affordable contender. Never let it be said that this competition is anything but a broad church.

Straddling the ground between sports car and luxury sedan is Jaguar’s most exciting entry in years, the all-new XE. It finally gives Jaguar the firepower against the mighty Mercedes C-Class and BMW 3 Series.

When it comes to crossing over, BMW’s 2 Series Active Tourer arguably pushes the boundaries harder than most. Its high-riding body gives it some people-mover cred, while its compact dimensions ensure city-friendly manoeuvrability. How will the judges feel about the first front-drive BMW ever?

It wouldn’t be COTY without plenty of mainstream offerings and it’s been a big year, with a fresh Subaru Liberty, the return of the Hyundai Sonata (replacing the i45), a new Kia Optima, VW’s latest Passat, and (finally) a new-generation Ford Mondeo. 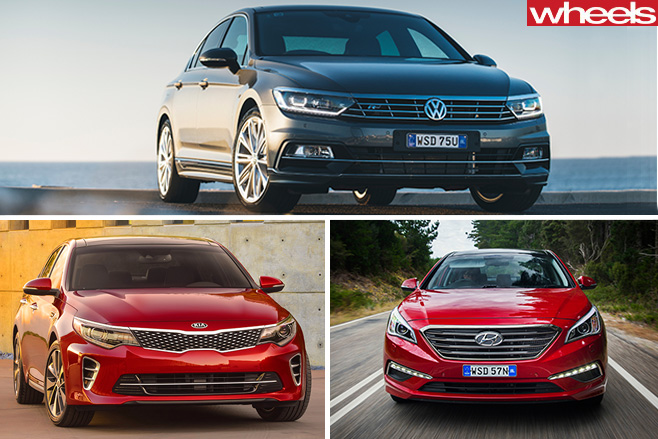 Seeing how manufacturers attempt to solve the same problem from divergent angles is one of the joys of COTY and the results are anything but predictable.

Aussie-made cars are again conspicuously absent from the list of COTY hopefuls.

The update to the Commodore, in the form of the VF Series II

with its excellent V8 option, simply isn’t enough to warrant an entry. Similarly, the largely new skin for Toyota’s Camry can’t hide the fact that what lurks beneath is largely unchanged.

Not that Holden will necessarily miss out on the COTY action; its Cascada convertible – a drop-top version of the soon-to-be-replaced Astra – is new to Australia so technically classifies for entry, even if the latest version of the affordable four-seat convertible has been around for three years overseas. That ought to be more than enough to iron out any teething production issues.

Kia’s Carnival cuts a lone people-mover path, bringing a new body that still offers the same eight-seat value that has made it a segment leader.

But it’s the affordable end of the market that offers so much COTY promise. Suzuki’s unassuming Celerio brings serious $12K value with a thrummy three-cylinder while Skoda’s Fabia packs plenty into its sub-$20K Euro package.

For now our challenge is to whittle those 43 eligible models – compromising more than 140 variants between them – down to a more manageable COTY field. By the time you pick up the next issue we’ll have that sorted. Hopefully.

New but not new enough for COTY 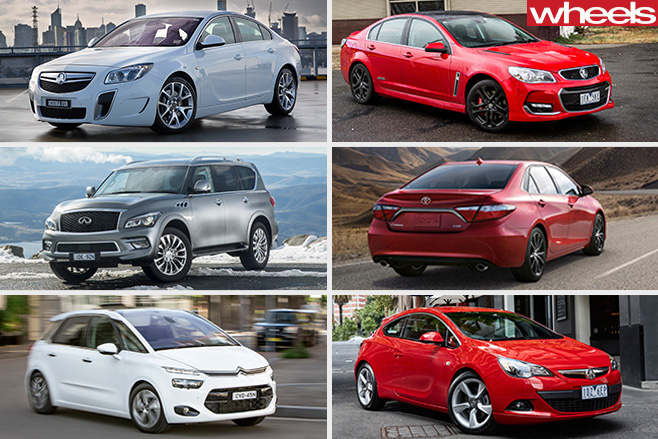 HOLDEN INSIGNIA
Next generation will form the basis of the first-ever imported Commodore, but this Insignia is no different to the Opel model available here previously (except it’s cheaper!).

VF SERIES II
A worthy update for the end of the Aussie Commodore line (V8-powered models are the standouts), but the body is unchanged, as is the chassis on all but SS-V Redline.

INFINITI QX80
It might be new to the fledgling luxury brand, but the QX80 is pure Y62 Nissan Patrol underneath, ruling it out of COTY eligibility.

CITROEN C4 PICASSO
It drops the Grand tag but doesn’t add enough of anything else, utilising the same platform and engine of the bigger people-mover in the Citroen family.

HOLDEN ASTRA
Return of the Astra nameplate is big news for Holden, but the car is identical to the one that wore Opel badges here a couple of years ago.

This year’s event marks a step-change in transparency and inclusiveness, but reputations will still count for nothing and impartial objectivity reigns. And the winner will have gone through the industry’s most exhaustive selection process.

COTY remains our celebration of the cars of the year. The whittling process starts here.