WITH Holden’s manufacturing closure taking the lion’s share of publicity in 2017, it is easy to overlook the importance of that other, final, manufacturer also pulling up stumps in this country – unless you’re one of the many thousands affected by the demise of the Australian car-building industry, of course.

Yet our history with Toyota is utterly profound, the fledgling firm from Aichi not only having chosen us first for exports, but also as the site for its first non-Japanese factory. Australia’s exalted place in Toyota’s history cannot be overstated.

The year was 1963 and production of the Tiara – an ageing 1.5-litre Toyota compact car priced beneath the cheapest Holden – commenced alongside various struggling Triumph, Rambler and Mercedes-Benz models at the Australian Motor Industries (AMI) plant in Port Melbourne. Despite Australia’s post-War misgivings and Japan’s reputation at the time for shoddy products, the plucky Tiara struck a chord. 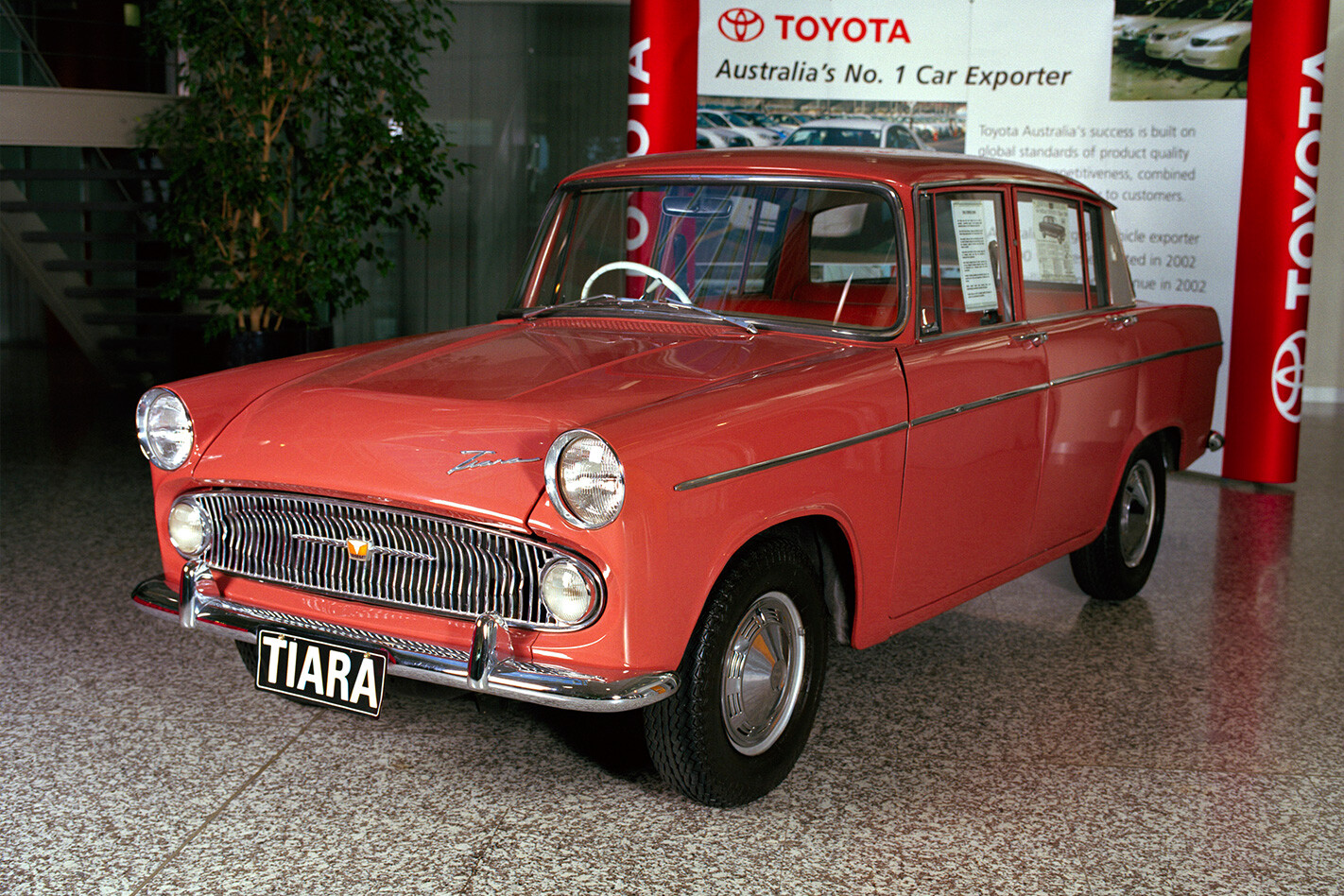 Encouraged by such success, Toyota fast-tracked the local assembly of the succeeding Corona just weeks after its home-market debut in late 1964. With Pininfarina-enhanced lines, sales of the ‘shovel-nosed’ RT40 soared.

“(Corona) adds real strength to the Japanese invasion,” Wheels remarked in February 1965. Also in that issue, a Corona finished equal first in a four-way against the Morris 1100 (our reigning Car of the Year), Ford Cortina and Isuzu Bellet.

A locally assembled Crown joined the Corona soon after, the first of several unsuccessful attempts by Toyota at breaking the Holden/Falcon/Valiant nexus. However, it was the Corona’s fiery kid brother, the KE10 Corolla of 1967, that cemented the brand’s reputation. By 1970, Toyota had eclipsed the declining Austin/Morris and Volkswagen brands, and was locked in a seesawing battle with compatriot Datsun for the number four sales spot, behind Holden, Ford and Chrysler.

But product-wise, the company began to lose its way as the nervous ’70s wore on.

Toyota increased its stake in AMI, yet the bread-and-butter Corollas, Coronas and Crowns it produced well into the 1980s gained weight but rarely any real advancement, falling behind go-getters like Chrysler’s Sigma and the Ford Laser. Such conservatism alienated enthusiasts as surely as it satisfied fleet company bottom lines, and at times it was up to the imported commercials – namely LandCruiser (which built its reputation on the Snowy Mountains Scheme in the late-50s) and Hilux – to keep sales buoyant. Fortunately, as the 1980s progressed, Toyota set its sights on conquering Europe and America. A belated switch to front-wheel drive brought long-overdue engineering and packaging benefits, starting with the original imported Camry (1983) and consolidated by the knockout ST160 Celica (1985). They were a different, exciting breed, leading to legendary local Toyotas like the AE82 Corolla Twin Cam (1986) and the second-gen SV20 Camry (1987).

Australia’s switch to unleaded petrol in 1986 opened the floodgates for image boosters like the mid-engined MR2, joining other Toyota import hits such as the Cressida luxury sedan and Tarago people mover. The brand’s marketing nous played its part, too, finally creating best-sellers out of Corolla and Camry in their respective classes. In 1991, Toyota Oz achieved overall market leadership, ending Ford’s reign.

But it was Toyota’s success in identifying the emerging global appetite for lifestyle 4WDs that promptly changed the world. Spearheaded by RAV4, by the turn of the century SUV sales had vanquished the mid-sized segment (still held by Camry). A decade later, once-invincible large sedans were in free-fall, and this year SUV sales surpassed those of regular passenger cars for the first time. Which makes Toyota’s late-90s decision to have yet another crack at the Commodore with the US-market Avalon an uncharacteristic blunder, particularly as it was a dowdy 1995 design exhumed for Oz. No surprise to learn that sales ran to only a fraction of Toyota’s forecasts. Interestingly, Avalon production usurped Corolla (which ended in 1999) at Altona – another strategic fail in light of the coming surge in small-car demand.

What did keep the Aussie plant humming were the huge exports to the Middle East, snaring more than two thirds of Camry production. In 2013 the millionth Camry left Melbourne’s docks, making it Australia’s most successful automotive export of all time.

Toyota did give the large-sedan Holy Grail a final go with the Aurion (in 2006), and nearly succeeded, but buyer preferences were shifting inexorably towards smaller cars and SUVs and 4x4s. Luckily for TMCA, that’s exactly what the imported Yaris, Corolla, Prius, RAV4, Kluger, Prado, LandCruiser and Hilux collectively covered. And still do. For Altona, the problem was that the staid local produce was no match for tastier imported cuisine. Fleets accounted for the vast proportion of Camry/Aurion sales volume. And despite posting a profit of $335 million over the past two years, the decision to pull the production plug on Altona was only a matter of time. And economics.

It came on 10 February, 2014. The global company president and great grandson of Toyota founder in attendance, Akio Toyoda, reminded the press of Toyota’s deep ties with us.

“It is most regretful for Toyota, and for me, personally, simply heartbreaking,” he said quietly. “Since 1963, Australia and Toyota built cars together for 50 years. That represents two thirds of Toyota’s 75 year history.”

The final Camry rolls off the Altona production line on 3 October, 2017. Oh what a sadness.