Dual Australian touring car champion and Hall of Famer Glenn Seton doesn’t expect his many credentials in motor sport to be much help when he and fellow pro drivers Steve Johnson and Leanne Tander take on a  huge grid of determined rivals in the opening skirmish of the Toyota 86 Racing Series at Winton Raceway this weekend.

With an overflow entry of 35 drivers cars committed, including some prominent names, it’s clear that competitor interest in one-make series in Australia is at an all-time high.

Given the massive entry, organisers must be relieved that the first of five rounds on the 2016 calendar will happen not at a demanding street course but at the slightly more benign Winton.  Yes, there are still some solid concrete walls, but fewer of them.

The pros will line up against a roll-call of ambitious drivers ranging from 16-year-old schoolkid kart whiz Calum Jones through to experienced production-car hand Garry Holt, who is 58. Eight of the competitors are 18 or younger.

The response has even exceeded the healthy expectations of Toyota Australia.  With the addition of the invited pros, 38 cars should be on the grid for the opening round. Looking through the entry, which includes his own son Aaron, 17, Seton Senior nominates a handful of young drivers he predicts will shake up the series.

“I know many people may not have heard of some of these kids, but I’ve seen many of them in karts and Formula Ford from the ages of seven and they’re terrific prospects,” says Seton.  “They learn so quickly and are exceptionally good race drivers.”

Seton says spectators should not be surprised if the pros are running in the middle of the field, rather than up front. He expects the racing to be occasionally wild and typical of one-make contests.

“I realise our experience with standing starts will be a help because many of the youngsters who’ve come from karts only know rolling starts,” says Seton.

Seton hopes the race rookies don’t get too carried away being on the Supercars bill in front of a big crowd.  “If some get a rush of blood, about half the field could potentially knock themselves out of contention.”

So who should be strong at Winton?

“Jon McCorkindale is a hard driver with speedway experience.  The kids who have been strong in Formula Ford, Cameron Hill and Will Brown are great racers.  Watch out for Tim Brook from Formula Vee, too.  Ben Grice will definitely be a front runner and so will be Adam Gowans.  They’ve been quick in other series. And the kart goers Damon Strongman and Jake Klein...” 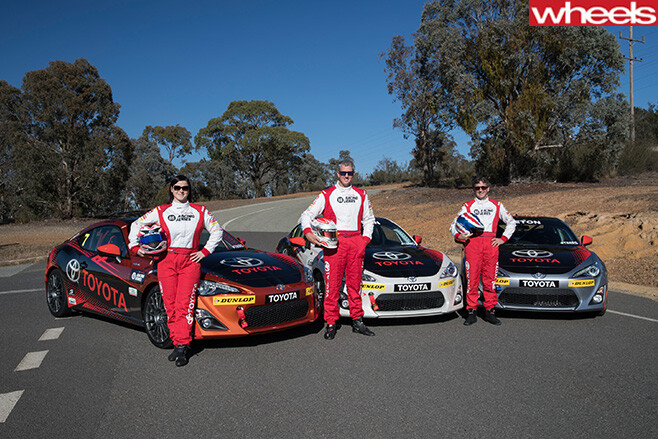 Most of the drivers are looking to use the Toyota 86 Racing Series as a stepping stone in their driving careers.

Underpinned by a straightforward and relatively affordable technical spec, the Toyota 86 Racing Series provides a perfect platform for budding competitors to develop their skills and gain exposure in the hope of progressing up the motorsport ladder to V8 Supercars, GT3 racing or an international career.

The entry fee of $1500 per round (including Bathurst), is the lowest for any mainstream national series and the prize pool is a generous $125,000.

Different pro drivers will be introduced across the five rounds, the intention being that they mentor the young competitors whilst also setting a high speed benchmark.

The series is managed by AirTime Autosport under the leadership of Neil Crompton, and commercial support has been building steadily in the lead-up to the opening event.

The series is open to all Australian-delivered manual variants of Toyota's cult-classic coupe.