IT’S Jinba ittai versus Hachi roku: Mazda’s ‘rider and horse as one’ philosophy, which guides development of its MX-5 roadster, against the Japanese translation of ‘86’, which carries on in spirit from Toyota’s fondly remembered, drift-friendly, AE86 Corolla GT.

They may differ in their approach to how a roof is fixed, but this is otherwise no oriental odd-couple. The MX-5 and 86 are united in the way they free up lightweight, rear-wheel-drive performance for those on a budget. 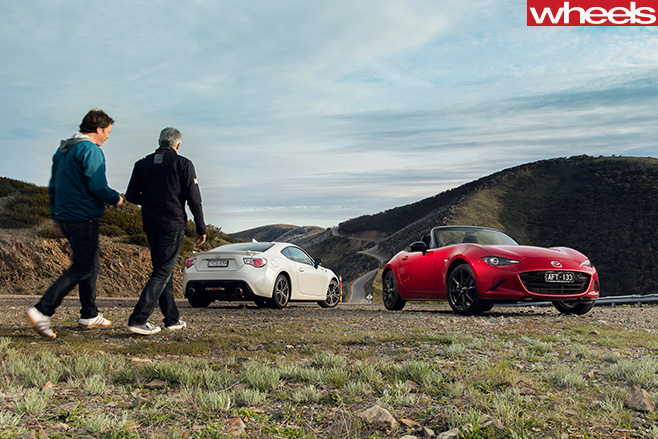 And since the arrival in December of a second, more powerful, engine as an alternative to the initial 1.5-litre, Mazda’s fourth-generation (ND) MX-5 has been an even match on paper for the 2.0-litre Toyota. 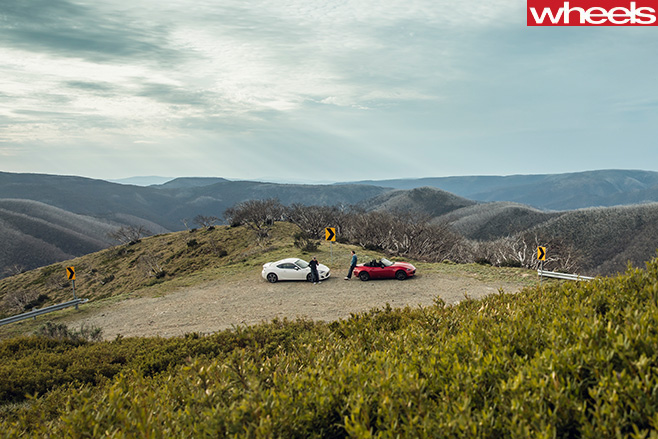 That’s not far off parity with the upper-spec 86, the GTS, which we have here and which costs $35,990. Nevertheless the top-grade MX-5 GT 2.0, its opponent for this comparo, costs significantly more at $39,550 before on-roads.

These are driver’s cars, so naturally we’re abiding by their standard six-speed manual gearboxes rather than the sacrilegious optional autos. 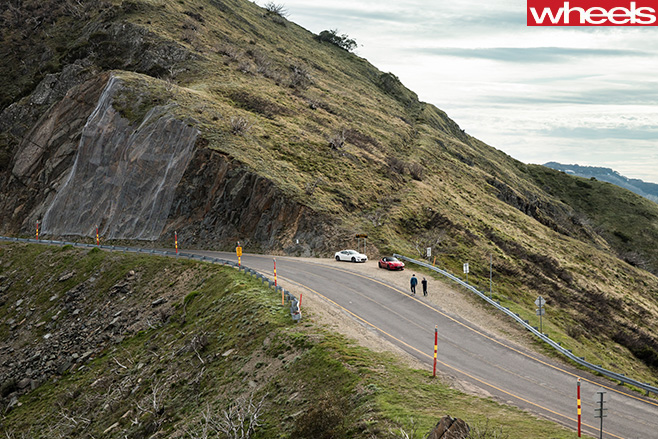 We’ve thrown in a track attack and mapped out some of Australia’s greatest driver’s roads to help us determine which of these two sports cars is best equipped to steal a purist’s heart. 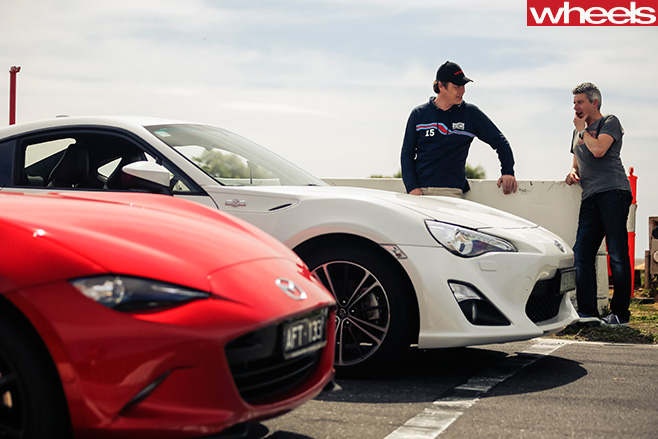 Calculate the corresponding power-to-weight ratios, and by the powers of super-convenience they’re virtually identical: 114kW per tonne versus 115kW.

That should make it close at our designated track – the roller-coaster on bitumen that is Haunted Hills, in Victoria.

First up is the 86, which in 2012 transported us back to the ’80s – a decade when Toyota was known more for a range of exciting sports cars than for dynamic dullness. 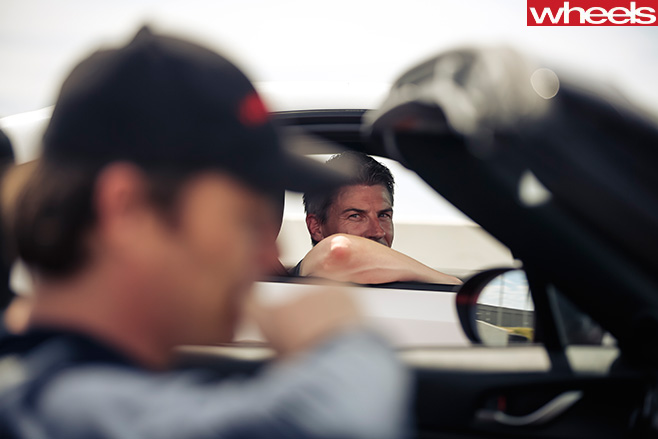 The Toyota needs some revs applied consciously as you release the clutch, because the boxer engine is easy to stall.

Maximum torque of 205Nm doesn’t materialise until a surely-that’s-a-misprint 6400rpm, though some meaningful pulling effort enters the fray from 3000rpm. 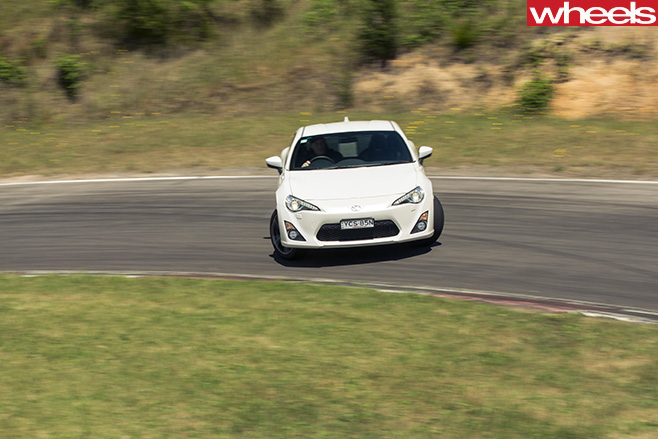 It’s beyond here where the driver quickly warms to the engine. There’s a raspy note that heralds greater response – the throttle pedal modulating crisply to bring incremental increases in thrust as the engine revs not just to 7000rpm, where peak power lies, but onto a 7450rpm cut-out.

The Toyota’s acoustics are a more natural match to the track environment, where its quasi-belligerent vocals contrast with the civility of the Mazda’s. 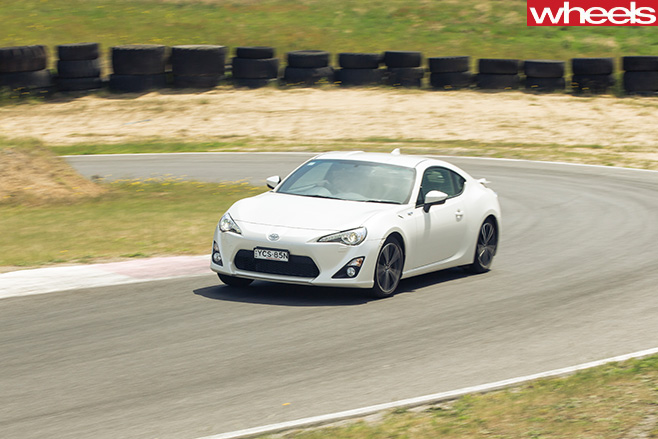 There’s still a pleasant induction note as you get serious with the Mazda’s fast pedal. Disappointingly, while the MX-5 1.5 revs to 7500rpm, the 2.0 maxes out – if that’s an appropriate description – at 6800rpm. And peak power is over at just 6000rpm.

Yet the MX-5 is the early pick of the drivetrains here on the tight, descending and ascending, layout of Haunted Hills. 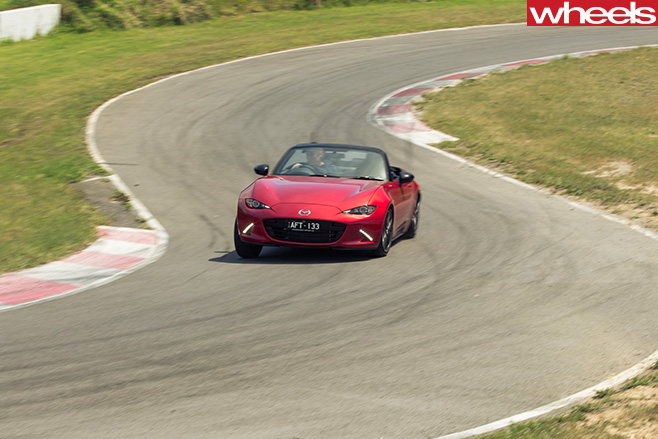 Throttle response is refreshingly sharp in this era of turbocharged engines. The MX-5’s 2.0-litre brings advantages out of slow corners, with its superior tractability, and on climbs, where momentum benefits from its 200Nm of peak twist arriving earlier, at 4600rpm.

And the Mazda’s six-speed manual is a purler. Where the 86’s stick-shift operation has some notchiness that slightly spoils its otherwise positive nature, the MX-5’s action – via a gearlever almost as chubby as the original NA’s – is satisfyingly slick and ultra-accurate. 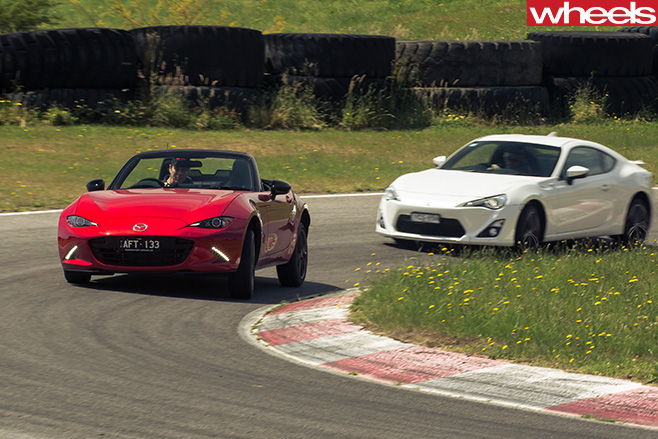 Also, you don’t necessarily need to switch off any driver aids in the Mazda to enjoy a track blast.

Electronics interfere with the 86’s progress, even if the VSC Sport button is pressed to employ the electronic nannies part-time.

Switched off, the 86 chassis is allowed to demonstrate its fine talents. 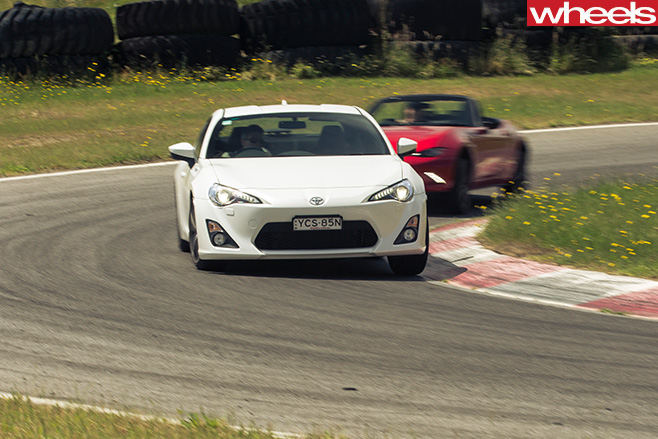 Its steering is not only progressive as forces load up during cornering, but there’s also genuine feedback.

The 86 sits remarkably flat through bends and under hard braking, with a seemingly imperturbable balance stemming from that ultra-low centre of gravity. 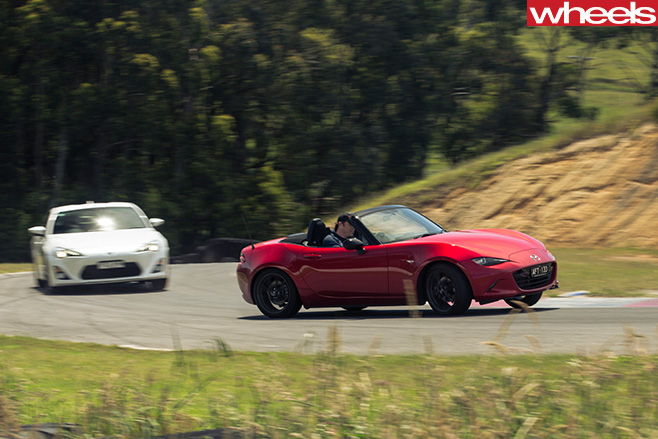 It’s easier to lose grip at the front wheels than at the rears, though. Without the more humble Prius tyres of the GT base model and on a baked track, sideways action takes a bit of prompting – stomping on the throttle either after trail-braking into a corner, or on the exit of the bend with some steering lock already applied. 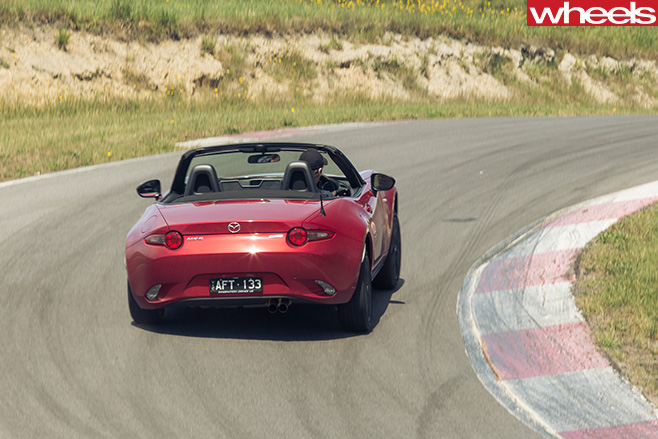 Yet the Mazda’s controls are still beautifully weighted, it brakes with authority and consistency, and it tips into corners with vigorous enthusiasm – tackling kerbs with equal aggression.

And while body roll is exaggerated, it would be erroneous to equate this with poor balance. 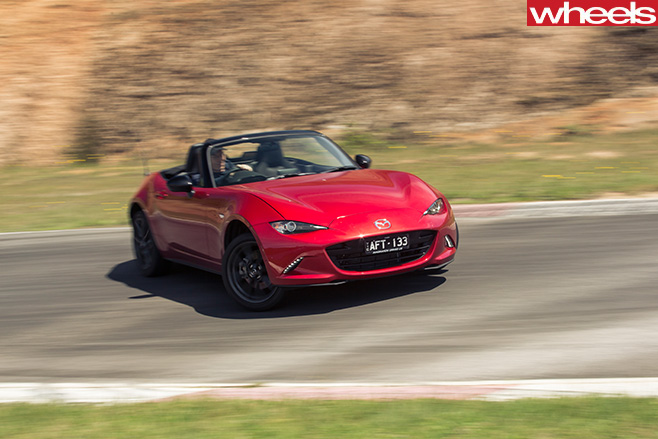 The MX-5 is more stoically resistant to understeer, and when the rears break traction they do so more progressively than the Toyota’s.

This is a rag-top that doesn’t get ragged on the limit – and one that will allow enjoyment with a safety net, courtesy of a vastly better calibrated stability control system.

It’s a close call between this playful duo of entry-level rear-drivers on the track – but the livelier MX-5 shades the 86 for involvement. And lap time – by four-tenths.

Unblemished racetrack surfaces have flattered many a car, but both of these Japanese sports cars transition terrifically to the bumpy bitumen of Aussie country roads. 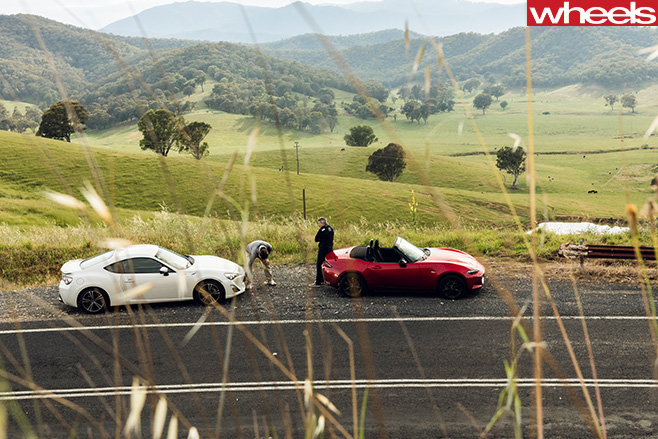 You could wear a blindfold while driving a Toyota 86 and be easily convinced you were behind the wheel of a Porsche Cayman – such is the similarly remarkable levels of suspension compliance considering the inherent roadholding capabilities.

The damping of the MX-5 feels a tad busier, but not enough to prevent the Mazda from being as impressively supple and comfortable as the Toyota when traversing country. 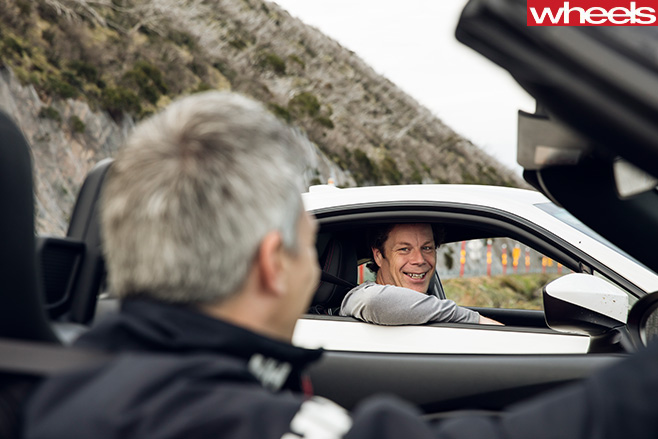 Its cornering composure is also less prone than the 86’s to being slightly ruffled by bumps, while you still need to drive the Toyota without its electronic safety net if you want to get the best out of it.

Add in the Mazda’s better tractability and torquier mid-range, and both our testers found it harder – and thirstier – work chasing or escaping from the MX-5. 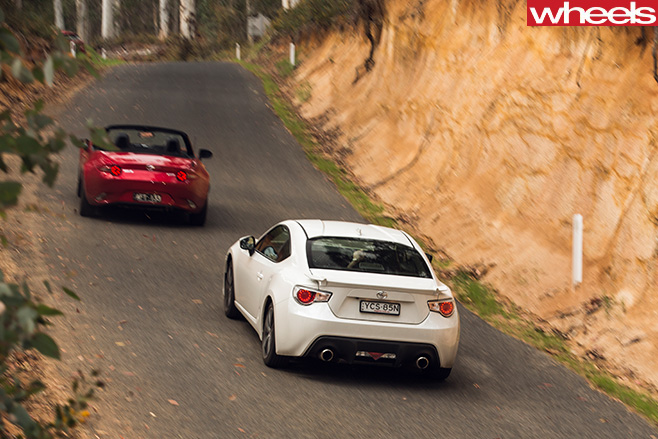 Where the Mazda can manage particularly twisty sections with its fabulously elastic third gear, the Toyota will often need a time-consuming downshift to second to ensure the flat-four isn’t left flat-footed with too few revs. 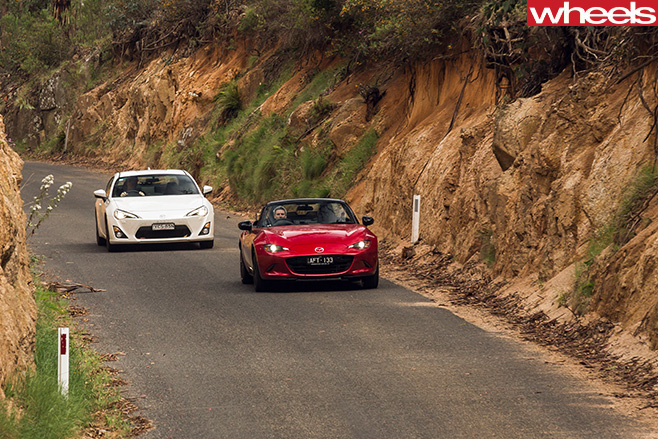 A horizon of horizontally winding roads is enjoyed by two superb driving positions. The 86’s is the best, though.

The Toyota already sits 30mm closer to the road than the 2.0L MX-5
(which rides 10mm higher than the 1.5L). And its front seats go lower – despite the Mazda having lowered its pews by 20mm over the previous model. 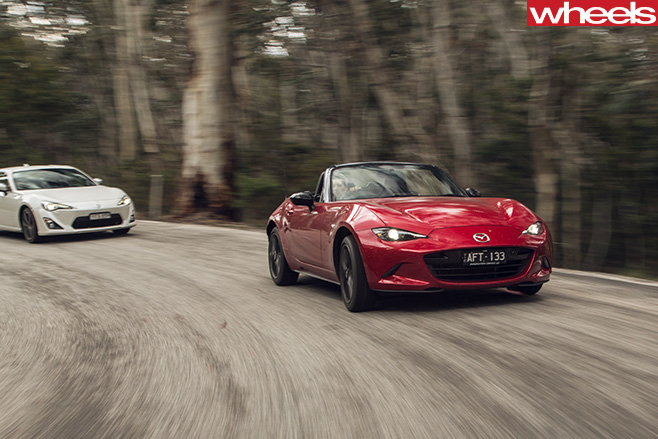 Not only is the MX-5’s seat fixed for height, but the steering wheel adjusts for height only. It’s a roomier affair in the Toyota, too, which offers more headroom and shoulder room.

Still, the Mazda can offer a view the 86 can’t – when you manually unclip and stow the MX-5’s fabric folding roof. 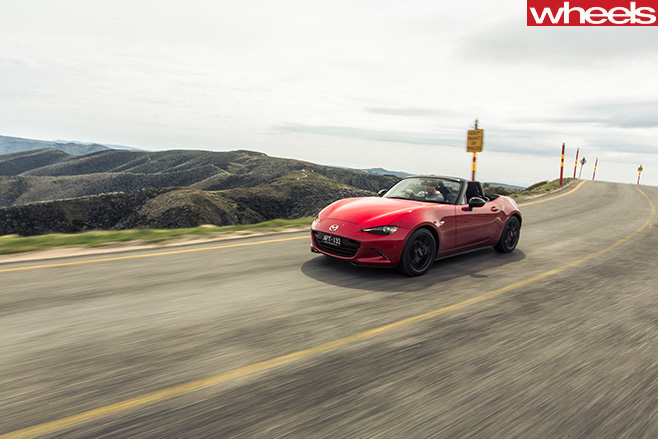 It’s here where the MX-5 experience is truly embellished. There’s little turbulence to greatly distort faces or disturb hair, and it creates the impression of the Mazda feeling faster than when its roof is in place.

The dashboard scenery is also more attractive here, subjectively speaking. Where the Toyota’s cabin requires the euphemistic description of looking “business-like”, the Mazda has a higher-quality look and feel – particularly with the GT’s 7.0-inch multimedia display, which looks like it belongs at least in 2015, where the 86’s smaller effort could be from the year of its number. 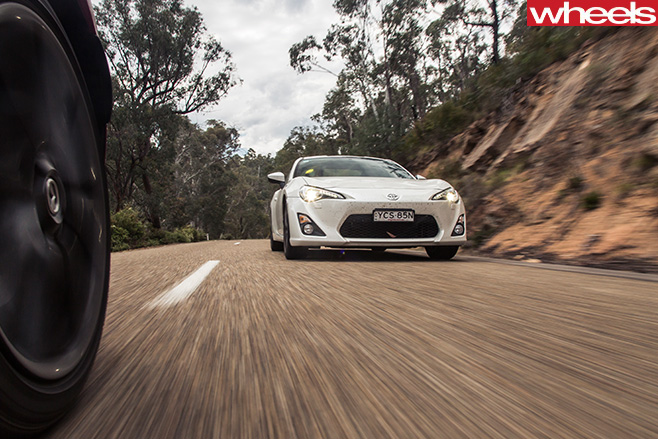 Music sounds vastly better via the Mazda’s nine-speaker Bose audio than through the no-name six-speaker system in the Toyota, and the 86’s cabin is also barely any more resistant to road noise than the MX-5’s with its roof overhead.

There are ergonomic flaws in the Mazda beyond the limited headroom and steering wheel adjustment, though. The rotary controller for the MZD Connect system is awkwardly placed, as are the moveable cupholders – whether they’re positioned in their default place behind and between the two seats, or in the slots either side of the centre console. 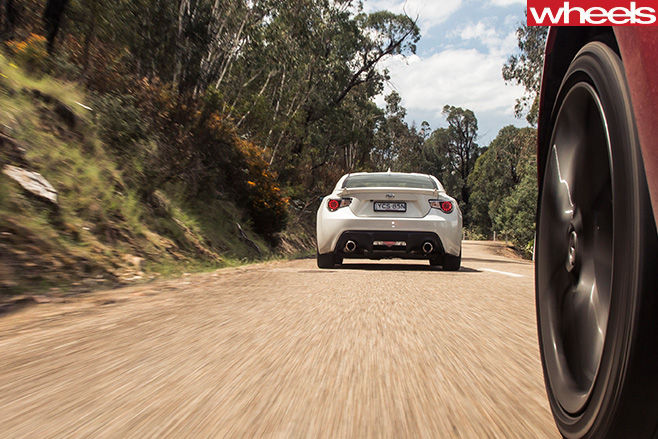 No notable blemishes in this regard in the 86, with the Toyota even providing knee padding. It helps, as this driver ended up with a bruised knee from chucking the MX-5 around Haunted Hills.

However, neither the roadster from Hiroshima nor the coupe from Ota (courtesy of Subaru) emerges from this battle looking black and blue.

We're simply fortunate to have the Mazda MX-5 and Toyota 86 – the new poster boys for affordable Japanese sports cars that partly compensate for absent Japanese nameplates such as the Integra and Silvia. 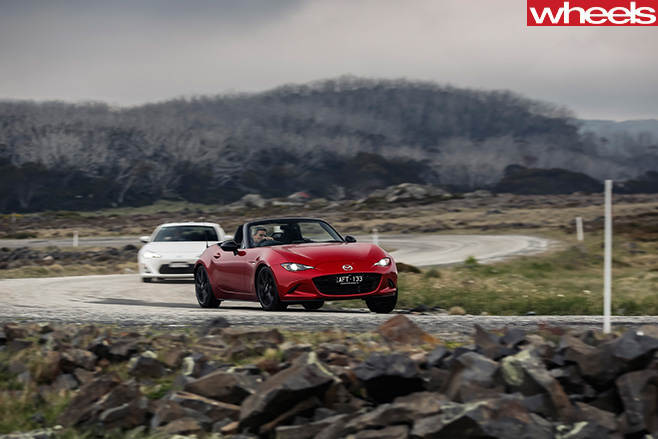 For about $40K or less, both of these sports cars embrace purity and simplicity to sync with a driver’s synapses.

Think logically rather than instinctively, and the 86, of course, is more practical with its 2+2 seating and foldable back seat. Yet the MX-5’s ability to go either covered up or topless brings the Mazda its own brand of versatility. 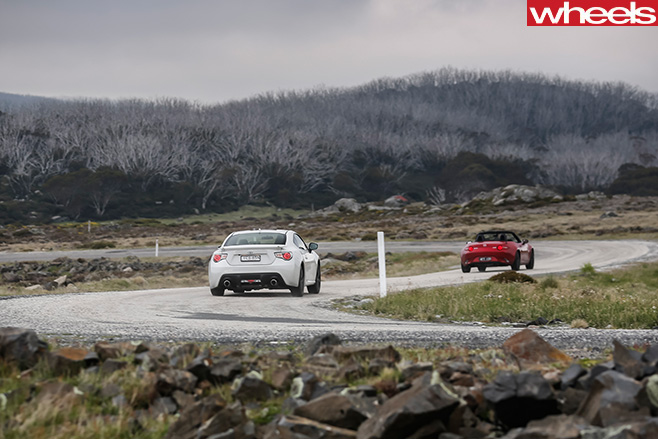 And the fact it’s a snugger cabin merely creates the greater sensation of the driver being fitted to the Mazda. It’s like slipping on a tailored outfit.

Add in the MX-5’s more flexible engine, which makes everyday driving as pleasurable as fast driving is enjoyable, and it’s “kampai” to a lightweight car that is almost quite literally a tonne of fun.

What happened to the 86 convertible?

Toyota teased us with a drop-top version of the 86 at the 2013 Geneva motor show, and at the Tokyo show a few months later – only for the idea to fold in on itself. Despite Toyota’s US youth brand Scion, which markets the 86 as the FS-R, pushing for the convertible variant, the car’s co-developer Subaru reportedly had manufacturing and safety concerns. A Scion executive also indicated Japan wasn’t expecting the model to be profitable if it went into production but wasn’t prepared to cop the estimated loss.

Which MX-5 will Australians buy? 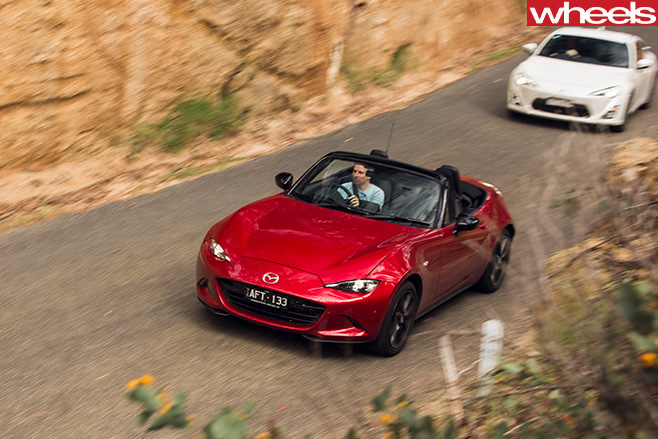 Mazda Australia forecasts that the 2.0-litre MX-5 will be only slightly more popular in showrooms – taking 52 per cent of sales while the 1.5-litre variant accounts for the rest. The most pleasing aspect of the company’s predictions, though, is that more buyers will opt to change gears themselves: 60 per cent. More than two-thirds of buyers are predicted to spend either an extra $6000 (1.5L model) or $5060 (2.0L) to upgrade to the top-spec GT, which adds goodies including leather (heated) seats, sat-nav, Bose audio, internet radio, auto on/off lamps, rain-sensing wipers, and MZD Connect.