SAY the name “Supra” and the ears of every Toyotaphile within ten metres will surely prick up.

For decades the Supra was Toyota’s top-tier sports car, a scalp-taking turbo two-door that was rapid enough to keep pace with – or beat – more exotic metal. It’s a nameplate that commands respect, and to some people that’s more important.

It’s a name with an interesting history as well. As we prepare to open the next chapter in the Book of Supra, a chapter which will see Toyota collaborate with what many might have thought an unlikely partner, let’s flick back through the pages and trace the history of one of Toyota’s most exciting cars.

1978. Disco was king and Japan’s auto industry was hitting its stride, with manufacturers across the country – now one of the world’s biggest industrial powerhouses – rapidly expanding their product portfolios beyond the humble compact cars that established them on the global market.

Toyota was especially keen on adding more emotional appeal to its showrooms. It had done a six-cylinder rear-wheel drive coupe before, the gorgeous 2000GT, but that car was a low-volume special priced well out of reach of the average Japanese salaryman. 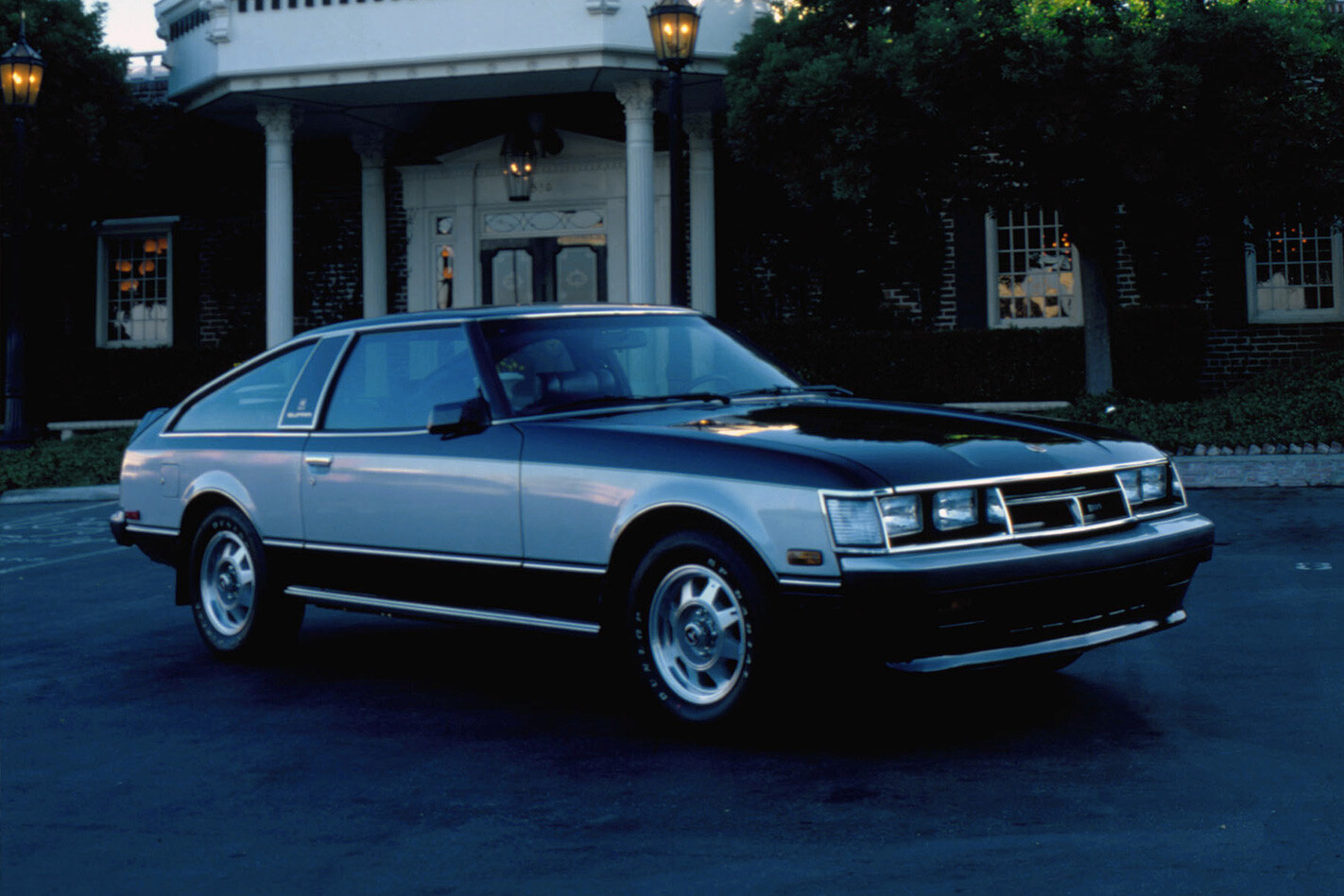 The four-cylinder Celica had satisfied the lower end of the market since 1970, when the first generation of that model was released, however the arrival of the second-gen Celica provided Toyota with an opportunity to develop a new sports car – one that would bring six-cylinder power to the everyman in a similar way to the Datsun 240Z that arrived nearly a decade earlier.

By stretching the wheelbase of an A40 Celica ahead of the A-pillar, Toyota created enough room in the engine bay for a fuel-injected single-cam inline six engine ranged in size from 2.0 litres to 2.8 litres.

Called the Celica XX in Japan and the Celica Supra everywhere else, power wasn’t a strong suit. The Celica Supra offered between 82kW and 92kW at a time when the Datsun 260Z was cranking out upwards of 120kW, and more potent twin-cam versions of the four-cylinder Celica were delivering outputs in the same ballpark. A turbocharged version of the M-series engine arrived in 1980 and boosted power to 108kW, while late model Japan-only Celica XXs received an independent rear suspension instead of the standard four-link live axle – which also benefited from tuning work done by Lotus. Power was still shy of its Datsun rival, but the template for a six-pot Toyota coupe was nevertheless set.

Fun fact: the same platform that sat under the Celica Supra was also the basis for the Celica Camry – a four-door counterpart to Toyota’s rear-drive four-pot coupe that was also the forebear to the much less exciting SV10 Camry. While the Supra name went on to become Toyota’s coolest badge, the Camry name went the opposite direction.

The Celica link continued for the second iteration of the Supra, though the platform received a major update that introduced independent rear suspension and a slightly shorter wheelbase. Sheetmetal continued to be shared with the Celica liftback from the A-pillar rearward, but the second-gen Celica Supra’s longer nose and entirely unique front-end styling – not to mention those fat stick-on overfenders on some variants – set it further apart from its four-cylinder stablemate. 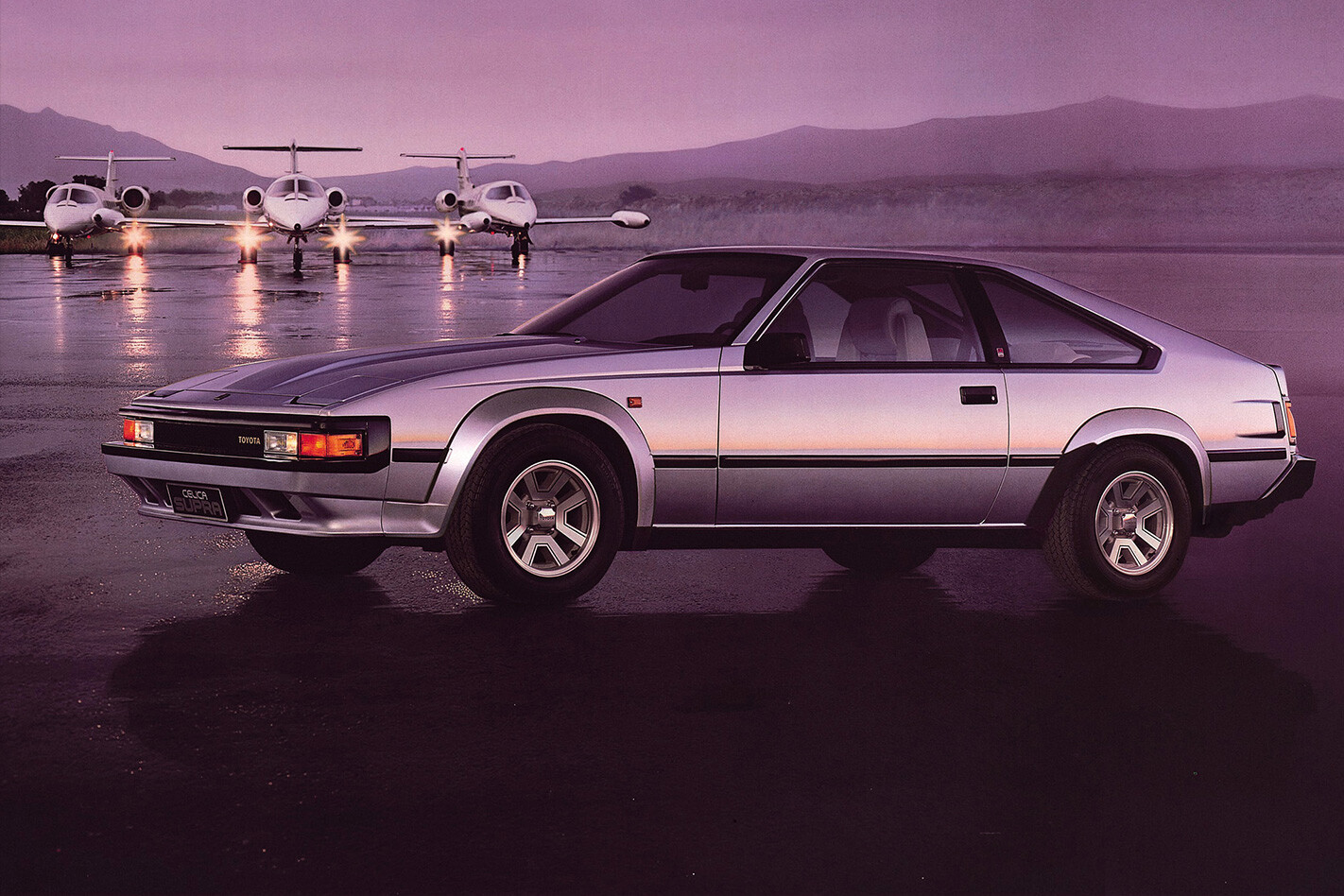 The Celica XX’s Lotus-tuned semi-trailing independent rear end became standard on all Celica Supras, pop-up lights cleaned up the nose, a digital dash added some 80s wow factor on select models and power rose significantly. Even so, despite the addition of turbocharged options and with the gruntiest engine being a 133kW 2.8-litre, the Supra still lagged slightly behind its Z-car rival, now the 280ZX. 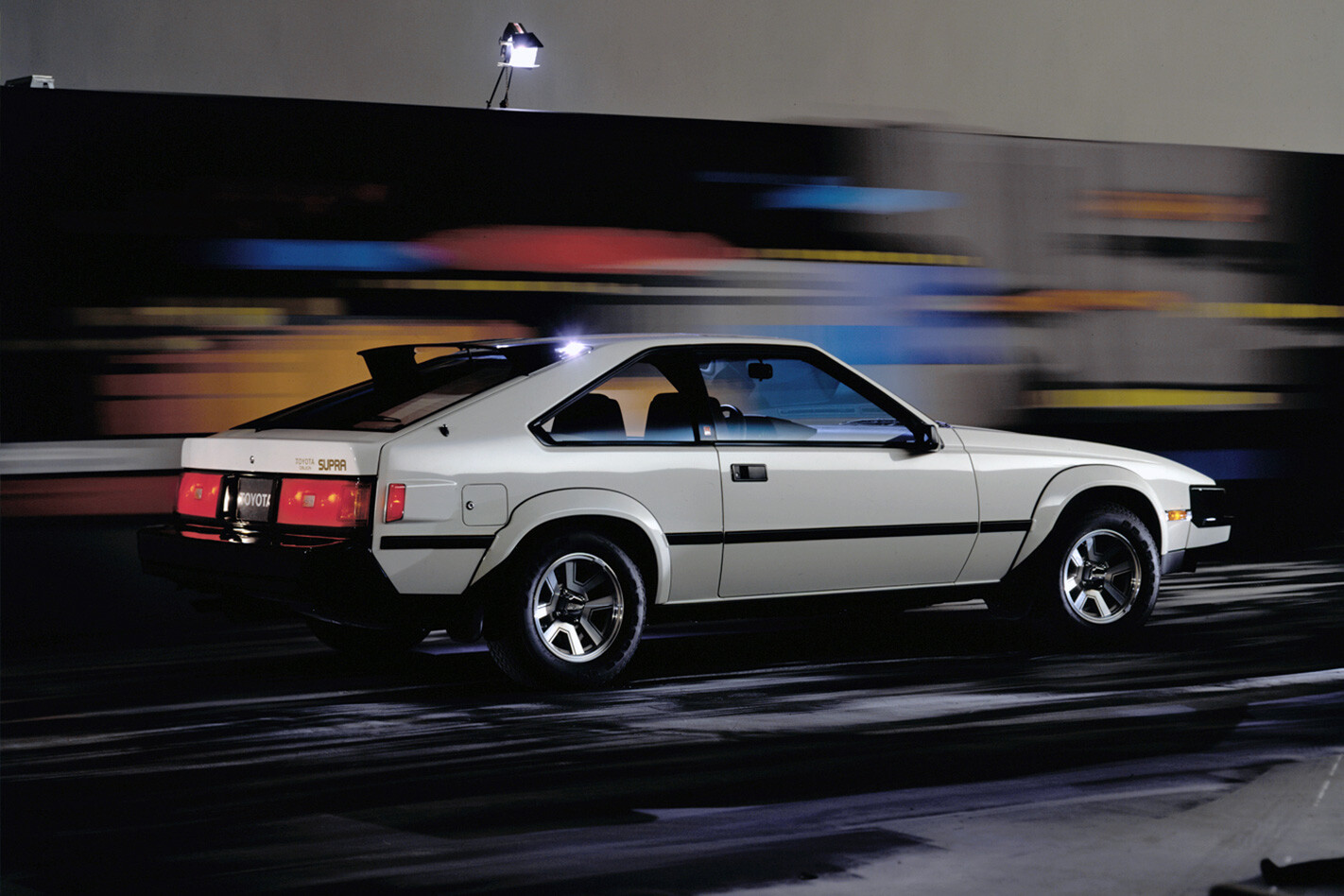 But the A60 generation would end by the mid-1980s, and Toyota, flush with cash from a booming Japanese economy , would start getting serious with its headline sports car. The next generation would perform a hard split from the Celica (which would take a new direction as a front- or all-wheel drive offering), and morph into a more barrel-chested and purposeful machine as a result.

Looking somewhat like a Japanese version of the Trans Am used in Knight Rider, the third-gen Supra finally ditched the Celica name from its bootlid and wore its own unique body styling for the first time. 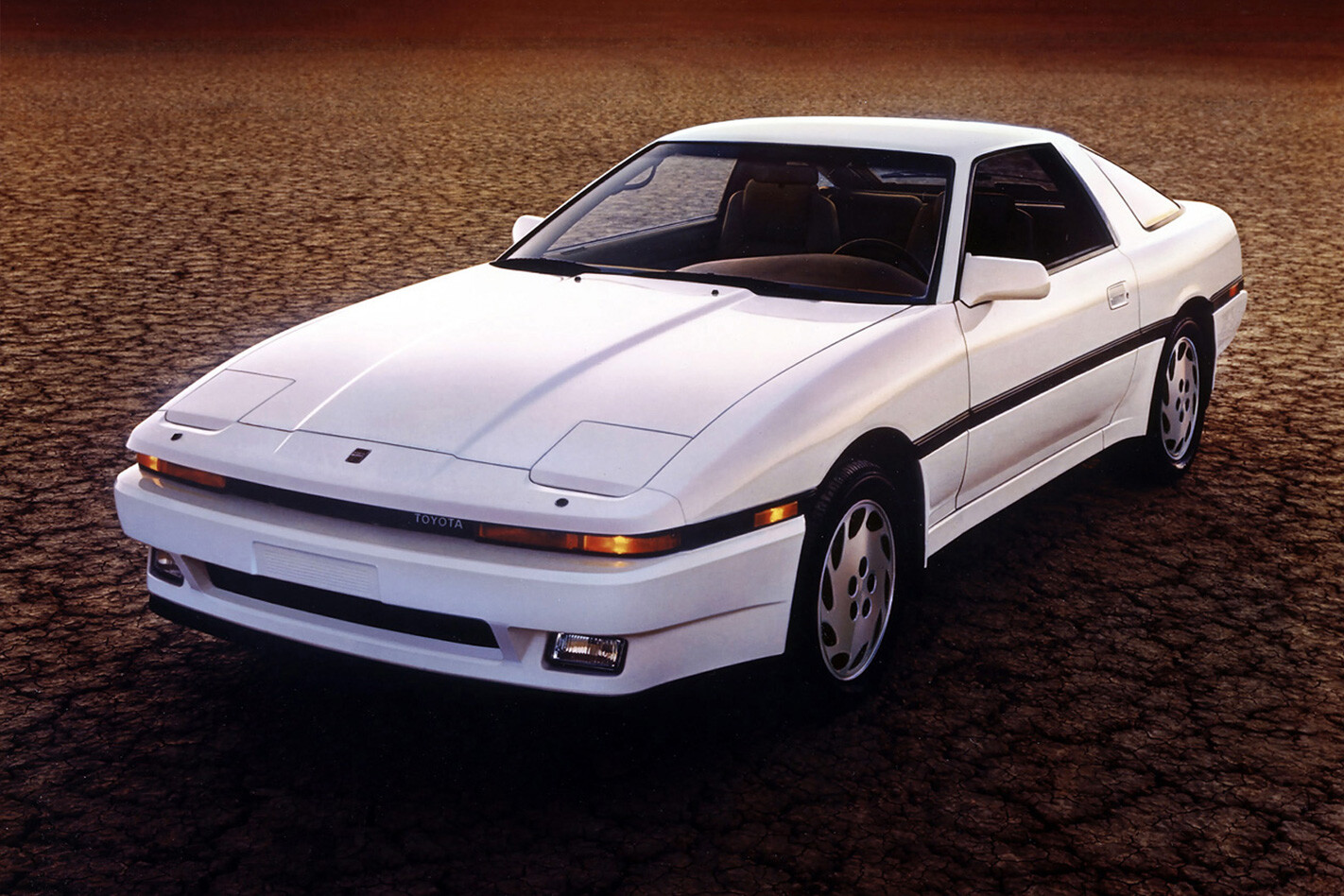 A three-litre dual-overhead cam 3.0 litre inline six took the Supra into a more sophisticated era, with four valves per cylinder and coil-on-plug electronic ignition rather than an antiquated mechanical distributor. In naturally-aspirated form it developed a healthy 149kW, the turbocharged variant that arrived in ’87 made an even stouter 172kW. In Japan, Supra buyers could also opt for a truly muscular 206kW twin-turbocharged 2.5-litre six-pot as well as tax-bracket-friendly low-output 2.0-litre sixes in turbo or atmo flavour.

New underpinnings saw the front MacPherson struts of the A60 turfed in favour of more sophisticated double wishbones, and the A60’s rear semi trailing arms were similarly dumped for a proper multi-link arrangement. At last the Supra had proper sporting credentials – even though its handling was geared more toward cruising than cutting laps. That didn’t stop Toyota from campaigning the third-gen Supra in Group A touring car racing. Other innovations included ABS and electronically-adjustable dampers on top-spec models, along with variable intake geometry on both the 2.5 litre turbo and 3.0 litre engines. A targa-top option was also introduced.

Now liberated from having to share bits with the Celica, the third-gen Supra could finally stand toe-to-toe with its contemporary, the first-generation Nissan 300ZX. However the arrival of the second-gen 300ZX in 1989 once again saw the Toyota sit in the Nissan’s shadow – though that would change when the next Supra arrived in 1994. 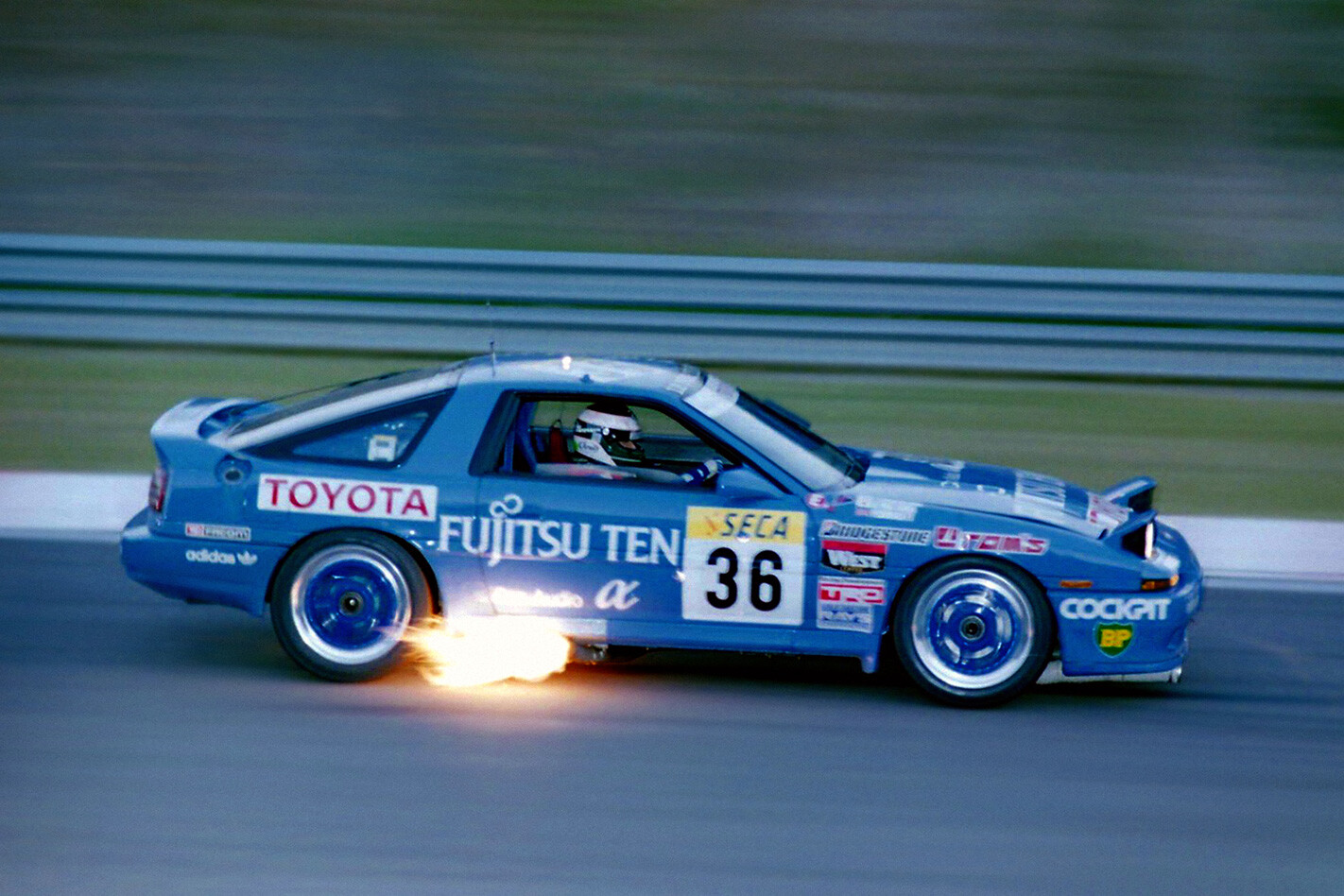 This is the car most will associate with the Supra name – the fat-hipped, long-nosed JZA80 Supra of 1994.

The A70’s eighties wedge styling was out and Toyota’s organic design language of the 1990s was in. Curves replaced creases, and the JZA80 Supra’s meaty haunches and low turret were arguably the most attractive interpretation of the Big T’s new look for the 90s, which also graced the widebody Camry and sixth-gen Celica. The bodywork was functional too. Those little intakes aft of the doors actually fed air to the rear brakes and differential, and the bonnet was made of lightweight aluminium. Alloy was also employed in structural crossmembers, sumps and suspension arms to trim more weight, and a special hollow-fibre carpet was used for the same reason. Like-for-like, the fourth-gen Supra was nearly 100kg lighter than the third-gen.

Inside, a driver-focused cockpit featured a dashboard clearly inspired by fighter jets, with space for two adults in a pair of low-slung seats up front and a pair of halflings in the bucket-like rear seats. As always, there was an inline six up front and driven wheels at the back. But Toyota’s engineers heaped a serious serving of steroids into the JZA80’s coffee, in the form of its all-new 3.0-litre twin-turbocharged six. Also used by the Japanese market Toyota Aristo, this engine – which was also available in naturally-aspirated form – went on to become legend: the mighty 2JZ-GTE.

A sequential turbo setup reduced lag and blew enough boost for 243kW in Europe-market Supras (output was strangled down to 206kW in Japan), while peak torque was a fat 431Nm. Remember that this was 1994, and those numbers were Porsche territory. It also made nearly 70Nm more torque than its supercar contemporary, the Ferrari 355, yet retailed at a far more affordable price point. A 10-second car? Certainly not in stock form, but mad-scientist types could easily extract those sorts of quarter mile times with a little help from the aftermarket – and maybe some direct-port nitrous injection. It was this ease of modification that made it a tuner favourite, and led to its starring role in 2001’s The Fast and the Furious.

Production ended in 2002 with no replacement, bringing the Supra’s 24-year run to a close. The Celica would survive until 2006, but after that car’s departure Toyota wouldn’t have a single sports car offering until the arrival of the 86 in 2012.

Now, 16 years after the last Supra rolled off the production line, Toyota will finally bring back its six-cylinder hero. Built on a BMW-designed platform (which will also see service underneath the next-gen BMW Z4) and using BMW engines, the next Supra will continue to use a classic front-engined, rear-drive, six-cylinder format.

Past design studies had hinted that the Supra could be revived as a petrol-electric V6 hybrid (a configuration used by the FT-HS concept of 2007), but leaked BMW documents are our strongest hint yet that the reborn Supra will have more conventional powertrains – BMW’s B48 2.0-litre turbo four cylinder in entry-level variants and the B58 3.0-litre turbo inline six in top-dog Supras.

The availability of a four cylinder option would be a first for the Supra, but could potentially see a return of the Celica name on the entry-level variant – a name which has always been associated with four-cylinder power. With the Toyota 86 already nearing the end of its lifespan, a two-powertrain, two-name strategy for the company’s next sports car platform could make sense As for styling, the stunning FT-1 concept revealed at the 2014 Detroit motor show is our best hint yet of what to expect, and with racy proportions and plenty of visual throwbacks to the sorely-missed fourth-generation Supra, the next-gen model should at least deliver on the visual front.

We’ll get our first proper look at it at the 2018 Geneva Motor Show, which opens next month on March 6, and a teaser image (below) suggests many of the FT-1’s styling cues will make it to production. The Geneva showpiece will be dressed up as a racing car, but the sheetmetal beneath its stickers and wings will be the real deal. Confirmation of powertrains will hopefully arrive at the same time.