Victoria Police has chosen its first imported patrol vehicles since the winding down of local vehicle production, with the Toyota Kluger and Hyundai Santa Fe replacing the Ford Territory general duty vehicle.

Victoria Police has long followed State Government guidelines to buy Australian cars first, but the end of Territory production in October left it with no option but to look at imported options.

Manager of Transport at Victoria Police Frank Milelli said the Territory was perfectly suited to a wide range of duties, from rural patrol to public order response, and rarely received complaints from officers.

He said when it came to finding a replacement Victoria Police approached every SUV manufacturer to see if they could provide a vehicle with that met police safety, performance and practical requirements, including a ‘Silver’ safety grading which meant they could operate safely up to 150km/h. They also needed to come off the production line with a police pack installed, which includes enhanced electrical system and wiring looms to plug in lights, sirens and other equipment, flashing head- and taillight units.

“They all said we could provide XYZ but only two of them came back with a fair dinkum willingness to a police pack option … Toyota with the Kluger and Hyundai with the Santa Fe.

“The BMW X5 also had a fairly good police pack option but we also apply financial principals too so we’ve selected two that are financially better and also politically better in case the public has an issue with us going with the BMW.”

The Kia Sorento was also well regarded, however the Korean company refused to install a police pack.

Milelli said the force decided to go with two different vehicles in case there were any unforeseen problems with either in the future. 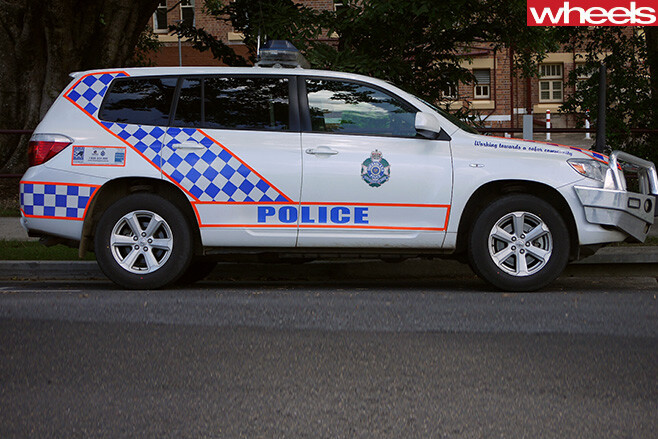 The Hyundai will also be able to offer a two-wheel-drive and diesel option.

The first Klugers and Santa Fe police cars are expected to come online in March as remaining Territories reach the end of their three year or 60,000km police lifespan.

The Santa Fes is already in use with the Tasmanian police force while the Kluger is used by Queensland Police.

The selection process for the Territory replacement is a good guide to what sedans will replace the Commodores and Falcons for general and highway patrol duties.

Milelli told Wheels the selection process is just getting started with Holden, Toyota, Hyundai, Kia and BMW so far showing an interest while Ford “doesn’t want to play”.

The force also looking at a replacement to its iconic “divvy van”, with the Holden Colorado being tested to carry the pods currently on the back of Holden Commodore Utes while meeting to Silver performance and handling standard.