The new Toyota Kluger facelift from the USA brings incremental mechanical improvements to match its new nose. Are they enough to keep the Toyota on top?

WHEN it comes to big seven-seater SUVs, the Toyota Kluger is Australia’s favourite, thanks to size, space, reputation, and ease of operation. This facelift from the USA brings incremental mechanical improvements to match its new nose. Are they enough to keep the Toyota on top?

WHAT IS IT?
Now in its third generation, the Kluger is an American-designed and made full-sized seven-seater SUV primarily, but with some Australian tuning to make it steer and handle decently. The MY17 facelift brings more power, improved economy, two more forward ratios, and minor exterior changes to help keep it a segment bestseller Downunder.

WHY WE'RE TESTING IT
The pre-facelift Kluger was a solid mid-way performer, behind the Mazda CX-9 and better Korean rivals, but certainly preferable to rivals like the Holden Captiva and Nissan Pathfinder. The new nose and updated trim aim to keep it looking fresh after more than three years on the market, but more importantly, a new eight-speed auto promises better efficiency and driveability. 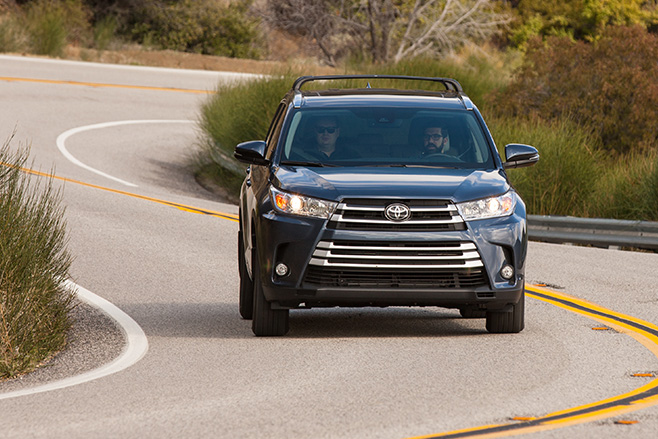 THE WHEELS VERDICT
Driven on its American home turf, the Kluger (in Highlander guise) impressed us with its strong performance and refined powertrain, but with the US rather than Aussie-market chassis tune, it also felt a little disconnected and ponderous around tighter roads, while the ride quality was never as comfortable or settled as we’d hoped. The good news is that the previous Australian steering and suspension settings will carry through to the MY17 Kluger, so it should offer better handling and comfort, to go with the improved V6 response and (hopefully) lower fuel consumption figures.

THE WHEELS REVIEW
WELCOME to the end of the beginning of New Toyota.

Back in late 2011, after a series of damaging recall setbacks and criticism over his vehicles being too dull, the company founder’s great-grandson (and newly-crowned president), Akio Toyoda, promised a “fun to drive again” rebirth. A defining line-in-the-sand moment. Subaru-developed BRZ/86 aside, the first tangible proof came with last year’s much-improved Prius IV. With the bold Toyota C-HR hitting the streets and reengineered Camry, Yaris, Corolla, and RAV4 successors coming, the revolution has started.

Which leaves the MY17 Kluger as the last of the old-school brigade. Defiantly middle of the road, and all the way from middle America to boot, the full-sized seven-seater SUV is all about delivering exactly what consumers want, and with little surprise and/or delight. 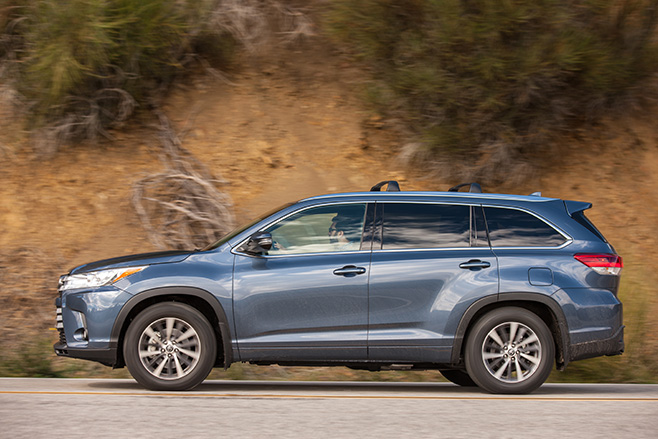 None of the above reset benchmarks, while a fidgety ride, road-noise intrusion, lack of wet-weather tyre grip, and unsupportive front seats raised our ire, but the chunky Toyota managed third among its direct crossover rivals (behind the Kia Sorento and Mazda CX-9), and fifth overall. Not bad for a high-riding SUV prioritising family-friendly packaging… which by the way, also includes vast cabin space, one of the industry’s most user-focussed dashboards, very obvious-to-operate switchgear, seemingly endless storage, huge doors allowing easy access to reclinable second and third row seats, and roof-mounted vents ensuring sufficient air supply to all passengers.

Does the facelift move the Kluger closer to the pointy end of its class?

An overhauled 3.5-litre 2GRFSE V6 (now with direct injection and a higher compression ratio) is big news, especially linked to an eight- rather than six-speed auto transmission. An additional 17kW and 13Nm of power and torque meant the US-spec Highlanders we drove around LA didn’t hang about. Eager off the mark, quick through the ratios (sometimes dropping three gears instantly for maximum response), and pleasingly punchy in the mid-to-higher rev ranges, the improvements are subtle yet useful. 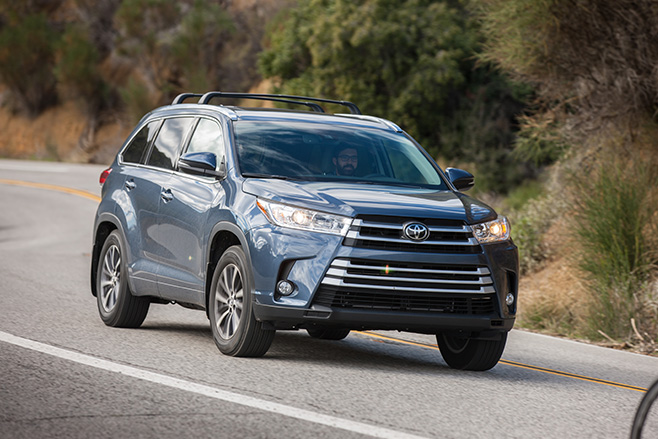 Fuel savings of 10 percent (running on 95 RON premium unleaded – though regular is doable too) further boosts the MY17 Kluger’s appeal (especially as no diesel is offered), but Toyota Motor Company Australia (TMCA) has said no to the available stop-start system found in US Highlander V6s. At a time when the CX-9 is significantly more economical yet virtually as fast, such consumer disregard is risible.

So is the deletion of autonomous emergency braking (AEB) on all but the flagship Grande from around $65K or so. Deletion? Yep, every US Highlander has it as standard (as do all local variants of the Mazda). Really, TMCA?

There have been no changes to the Australian-specific steering or strut-front/double-wishbone rear suspension tune, so we’re expecting the newcomer to uphold its muted yet confident handling and occasionally unsettled ride characteristics. Our time in the overly light-helmed and understeer-prone Highlander through some of So Cal’s more curvaceous corners at least showed how much better our chassis fettling is.

That sums up the changes to our bestselling monocoque-bodied seven-seater SUV – yet the powertrain improvements are overshadowed by the curious non-availability of stop/start and range-wide AEB to Aussie buyers. Pity. 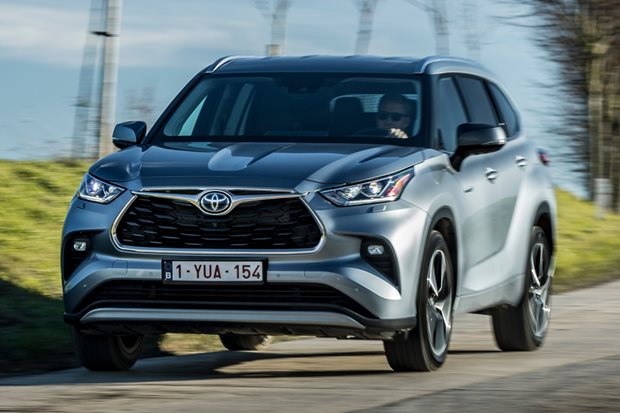