Subie’s half of the Toyobaru twins may have been beaten to market, but can it lead along one of NSW’s best inland roads? Daniel DeGasperi points the BRZ into bushranger country with an 86 in tow.

It’s a fork-in-the-road moment, but the decision is closer to picking between hell and heaven. An exact 180 driving kilometres north of the Sydney Harbour Bridge, kerbside on the Pacific Highway, a green sign reads ‘Bucketts Way’ and points left.

Here, drivers can choose to continue north via the Pacific Highway and its blend of mangled surfaces, varied speed limits, heavy traffic and heavier speed enforcement. Or, they can head inland and criss-cross over the Great Dividing Range on tight, technical tarmac that wraps around mountains, then skims across ridgelines, and sweeps over the plains. This is a ‘sign’ for driving enthusiasts.

Departing from the usual route is something the Subaru BRZ and 86 do for their respective manufacturers. For Subaru in Australia, it marks a shift in company philosophy. After committing to selling only all-wheel-drive cars 17 years ago, this rear-drive coupe is both an aberration and a revelation. There’s little reason why the Boxer Rear-drive Zenith (yep, really) can’t make the same impact on the motoring landscape as a certain other three-letter Subaru nameplate did back in 1994. Not least because the turbo, all-paw icon has aged to the point of anonymity. Everyone points at our WRC-blue BRZ. It starts in the western suburbs, the night before our drive, when an R32 Skyline pulls up at the lights. The driver mimes the action of winding down a window, asks, “What’s that, bro?” and quickly follows that with “Looks mad – izzit turbo?” He’s disappointed to find out that it isn’t.

On the F3 Freeway, a driver in a dumped BA Falcon slows, pulls in behind, changes lanes, sniffing around the car like some sort of automotive mating ritual. Blokes at the servo want to chat, kids press their faces against the side glass at coffee stops. Deputy editor, Jesse Taylor, reckons the only cars that he’s seen nab this much attention were the reborn 2001 Holden Monaro and 2003 Mazda RX-8. The sort of people who turn their nose up at exotics, or don’t dignify the wealthy owners with a glance of interest, love these cars.

All that you’ve read about the 86 applies to the BRZ. Put the argument to Subaru or Toyota engineers that the other company owes more to the car’s development, and you’ll only end up with a face full of Asahi. The single engineering difference is that the BRZ has stiffer front springs (by around 10 percent). On the outside, a new front bar, redesigned headlights and different front guard vents round out the differences. Even the alloys are identical to that of the top-spec Toyota 86 GTS. But both twins are built by Subaru, alongside Imprezas and Foresters at its Gunma plant in central Japan. On the inner side of the bootlid of both cars, the stamping reads ‘SUBARU’. Inside the cabin, however, the audio system and switchgear font are identical to that in a Tarago maxi-taxi we take to a pub in Armidale later that evening.

Opinion is split on looks – I reckon the concave surfacing of the 86’s front bar looks ungainly; another tester reckons the Subie’s grille looks like “a Greek girl’s moustache”.

The Subie essentially gets all the kit of the GTS, with the exception of satellite navigation (a $1815 option) and leather/Alcantara heated front seats ($1500). Toyota charges $170 for the first four scheduled services; Subaru offers four free services to 60,000km. Subaru Australia has been allocated 200 cars this year, but the BRZ can only be bought online. 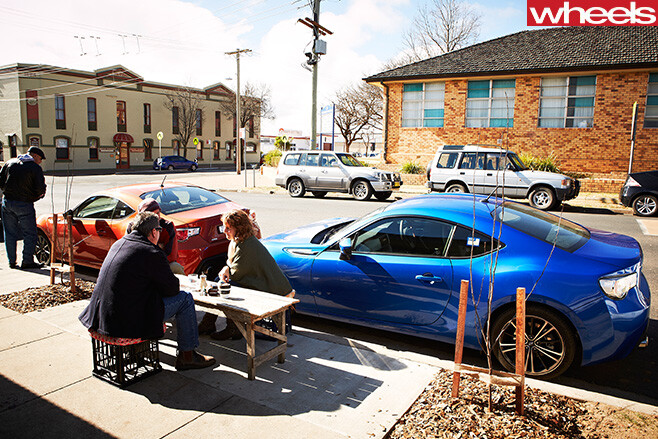 By comparison, Toyota has secured 2000 cars per year. Unlike in the 86, each BRZ is individually numbered; ours is production number 066.

But is the BRZ worth the extra over the base 86, which runs size-smaller 16-inch alloys and thinner tyres? Only one way to find out – we brought along an 86 for this drive. Having spent plenty of time in this orange 86, the BRZ immediately feels firmer around town. There’s a whisker more jolting in the 50-aspect Michelin-shod Subie than the 55-aspect Yokohama-wearing Toyota.

The single problem we’ve had with the performance of the base 86 is its lack of wet-weather grip. Sure, less grip equals more fun, but the front-end feels too keen to wash at low speeds. Will the 17s fix that problem and still allow the chassis to play? 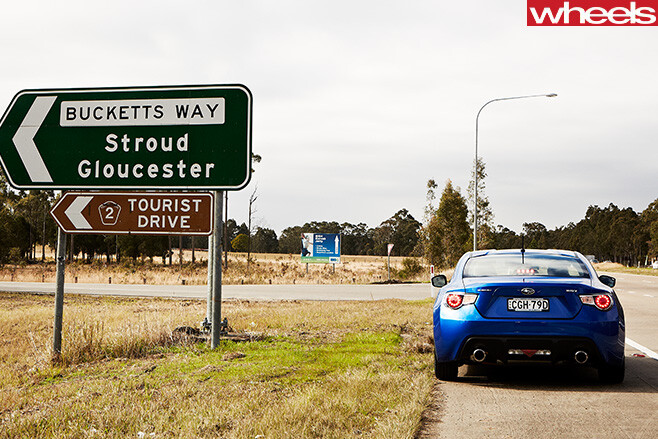 Today, we won’t reach the Qld/NSW border. Continuing our run of ‘car versus road’ features, we’ll pit this new Subaru against one of the best roads on the inland route to ‘Goldy’ – Thunderbolts Way. From the highway turn-off (see ya later, Pacific Highway), Bucketts Way is the 80km driveway to that road. Dotted with quaint towns, and flowing coarse-chip, it’s a good time to feel the worth of the BRZ’s extra appointments over the base 86.

It’s nice to have proper climate controls, instead of rotary dials that are shared with a Toyota Corolla Ascent. The dashboard feels more ‘premium’ thanks to silver highlights, a digital speedometer, and vinyl padding on the door tops and centre stack sides. Of course all of this can be had on the 86 GTS, but who needs to spend $2300 over the BRZ for stuff you don’t need like sat-nav and leather? We reckon the single Subaru spec offers the best value.

The real fun begins as we pick up Thunderbolts across the Manning River, 200 metres above sea level, at the foot of the Great Dividing Range. Pine trees tower over the shallow, but flowing creek, keeping the road in an almost permanent state of shade. We’ll climb around 50 metres for each of the next 15 kilometres to a 900-metre peak. An iron-truss bridge signals the start of what would make an epic tarmac rally – 90-degree left, bridge, 90-degree right, straight, climb, 45-degree left sweeper, crest-right. Here, on steeper parts, that Sykline driver from the night before might be rightly disappointed that there’s no turbo.

The 86/BRZ’s 2.0-litre naturally-aspirated boxer engine – dubbed FA20, and basically an Impreza engine with Toyota’s direct-injection system – produces its peak 205Nm at 6600rpm (only 9Nm more than aunty’s Impreza 2.0i), just before 147kW comes online at 7000rpm, and just prior to the 7800rpm cut-out.

Nah – old mate is wrong. Those latter numbers – the revs, not the outputs – are clues to the enjoyment factor. The engine may sound like a Forester in the bottom half of its rev range, but hit 4250rpm, and the cams lift, and the pace quickens; by 5000rpm the tacho needle seemingly doubles its pace; the gravelly note smooths out, as though you’ve filled a blender with cookies, added milk and hit high. Right at the top of the tachometer the driver is rewarded with throttle crispness that allows even amateurs millimetre-precise movement of the 215mm-wide rear tyres. That right-pedal connection, teamed with the brilliantly responsive steering on-centre, and the need to heel-and-toe from fourth, to third, to second, to minimise lost speed in the bends, makes for superbly intimate, focused driving.

I’m in the BRZ, following road-test editor Jimmy Whitbourn in the 86, and we’ve both forgotten that photographers Brenton and Suesse are back at the bridge. They’d wanted us to do a few passes over the river, but suddenly our turnaround point was too many kilometres up the mountain. These cars make drivers selfish.

Trailing the 86, I notice that it’s behaving differently to my BRZ. In sharp bends the Toyota clearly looks keener to roll onto its outside-rear, as though the back tyres take a fraction longer to bite following the turn-in sharpness. The Subie is almost telepathically-immediate on turn-in, and its line can be adjusted somewhere between where the throttle meets, then presses, the carpet. Its grip, poise and balance means that, barely a quarter of the way into this car-versus-road stoush, the machine is winning. 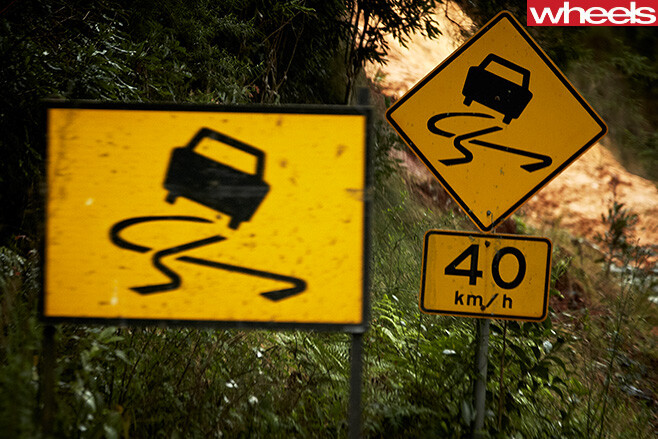 When the snappers are finally fetched, we swap cars and the difference is confirmed. The base 86 has more slack in its steering on-centre, its body moves more, the reduced grip palpable. What portion of this is down to the tyres, compared with the softer front springs, isn’t clear. The BRZ (like the 86 GTS) also gets bigger brakes: 294mm fronts, up from 286mm, and 290mm ventilated rears replacing 286mm solid discs. The pedal of the base Toyota is softer; the whole car feels less direct, but more measured and possibly more intimate.

Once over the Range, one of the best single kilometres of the road unfurls. It’s the sort where you can see the next five corners, from the bottom of a hill, looking up through the top of the windscreen past red-clay rock faces, wire fencing and grazing cows.

The surface is smoother than before, the corners wide with more generous room for, erm, adjusting your line. In the dry, the 86 is easier to get sideways – it’s as simple as that. Yet, arguably, the BRZ loses very little for its extra grip, blending extra sharpness with intimacy and adjustability. The front-end is more trustworthy, particularly, permitting higher corner entry speeds, and earlier throttle application to thumb the nose into line. Drive tidily, sensibly-fast, and the ESC’s Sport mode is fine, unobtrusive; if a slow-in, sideways-out approach is more your style, switching the electronics off completely is the go. This chassis is so faithful, the safety net is only there for nuffies. The BRZ’s tetchy ride around town is long forgotten. Pushing on towards Branga, adjacent to Port Macquarie on the coast, the road turns rollercoaster. On a map it’s the point where green colour, tree icons and words like ‘national park’ and ‘reserve’ give way to a wash of light grey; the plains. Open sweepers plunge then rise, occasionally slicing a neat line directly through tall rock faces. On steeper hills, the BRZ struggles to maintain speed in taller gears. You need to work the engine, so it’s lucky the Aisin six-speed manual is a slick unit, if not quite to Honda standards. This isn’t a car for those who most enjoy flexing a right ankle on straight roads.

While it’s tempting to raise speed to something approaching a ‘two’, the surface quality is mostly patchy, often poor. For me, that’s a good thing. Feeling the arms of a sorted suspension dancing to keep up with surface changes, the dampers compressing at the bottom of a hill, then extending over crests, is almost as enjoyable as hanging the rear out in the tight stuff. Poor surfacing also separates capable cars from the truly great. Although Subaru/Toyota engineers would have never driven on this road, the coupe twins feel born for it. Their wonderful composure and absorbency indicates that they were well tested on rough roads. A turbo WRX may be able to get to 100km/h 2.5-seconds faster, but its lolloping dampers would spit the performance icon into the field at the sort of pace these rear-drive coupes can sustain.

WRX versus Thunderbolts? This road would win. Try the Pacific Highway for size.

The final 30 kays of Thunderbolts, towards meeting the New England Highway at Uralla, is dead straight. It provides a perfect time for reflection. Both the Subaru BRZ (slash Toyota 86) and Thunderbolts Way are brilliant because they offer drivers such great diversity. What the road offers in terms of surface and topography changes is matched (and then some) by the breadth of ability inherent in this giant-killing, but humbly priced, and soon-to-be-classic rear-drive coupe.