The Toyota Kluger offends no one by sticking to the middle of the road.

NEED proof that Australians are becoming more like Americans? Presenting exhibit A: Toyota Kluger. Square jawed, spacious, and muscular, the seven-seater SUV feels totally tailored for local tastes. No surprise, then, that it is this test’s biggest seller by some margin.

The latest Kluger, however, is more Uncle Sam than Uncle Arthur, with this third-generation Toyota Camry/US Avalon-based version sourced from Indiana since its early-2014 launch. 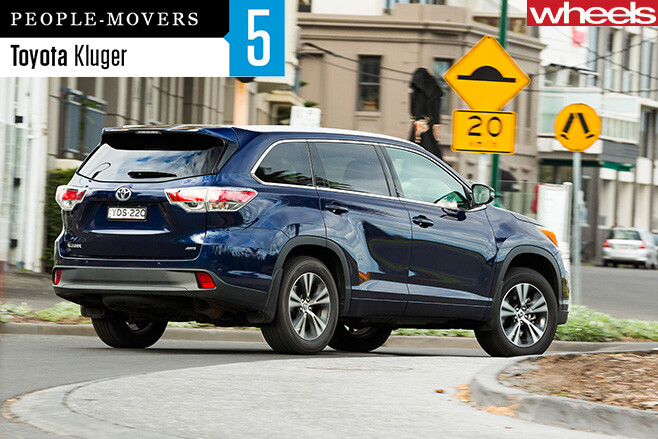 In a comparo last year, the up-spec Grande AWD suffered against rival diesel alternatives (the Toyota is petrol-only), mainly because of a jittery ride, road drone, and excessive consumption. But this time, both the GX and GXL AWDs (we reviewed both; GXL pictured) impressed on a number of fronts.

Firstly, it’s the most powerful, with addictively instantaneous step-off acceleration for a two-tonne behemoth, backed up by strong mid-range urge. Toyota’s buttery-smooth 3.5-litre shows its relative efficiency by out-sipping most of the other V6s bar the speedy yet parsimonious Kia Sorento for economy, and it  sounds the most spirited doing so.

Then there’s the Kluger’s dynamics, which reside between dull and delightful. Yes, the steering feels muted, but it’s an agile and faithful handler. Grip isn’t great (ours wore Michelin Latitude 245/60R18s), which might explain the test’s longest braking distance from 100km/h (41.2m), but the chassis seems planted (until the rubber lets go.) The ride, while fidgety except over the slickest surfaces, somehow possesses an underlying controlled suppleness that some might even consider restful. Or maybe that’s just the thickly padded seating. 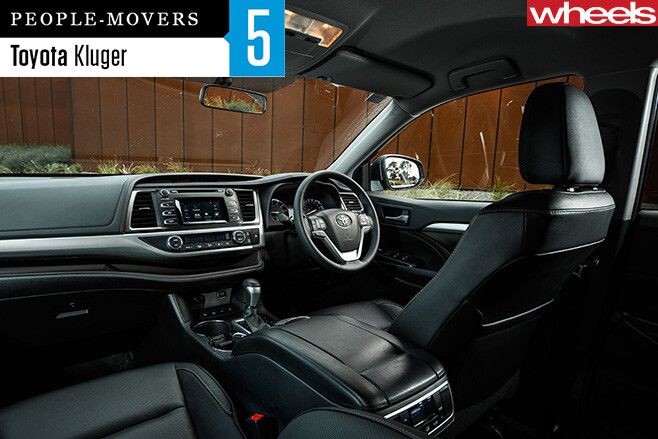 Kluger’s pleasingly spacious cabin is actually one of Toyota’s best, with a contemporary and user-friendly dash proving an immediate showroom drawcard. A lofty driving position, ahead of crisp analogue dials, a simple climate-control layout with superb ventilation, and bags of storage, all provide further evidence of smart thinking.

Entry/egress is easy to the all-reclinable second and third rows, with the middle split favouring right-hand drive, so only the nearside passenger needs to get out to let people through to the back. Note these are not as lofty as the nosebleed pews in, say, the Nissan Pathfinder.

Along with adult-accommodating space, there’s also rear variable air-con control with vents for all outboard occupants, overhead lights, cupholders, storage, and sufficient glazing to gaze through.

With all seven seats occupied, available luggage space is a meagre 195 litres, but that extends to 529 litres with the third-row folded. Cabin downsides include broad front seats that feel a tad lacking in support, and some of the albeit-hardy plastics scream ‘America’ rather than Japan. Otherwise, this is a pretty well-sorted beast. 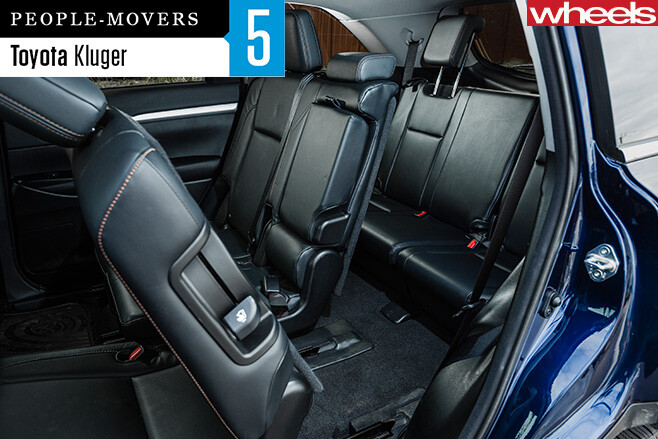 The Kluger strives to please with much competence and few compromises, for better or worse traversing the middle road with typical Toyota thoroughness. Whether you’re in Richmond, Virginia or Richmond, Victoria, big, honest value sells. Perfect, then, for the United States of Australia.

All previous-gen Klugers were sourced from Japan, but today’s XU50 series is all-American, except for the two years of electric steering fettling and retuning of the strut front/double-wishbone rear suspension it received in Australia prior to launch, for improved handling, ride and gravel-road stability.

Now the MY17 facelift has been unveiled in the US, introducing an eight-speed auto for improved economy, a revamped V6 with direct injection, redesigned headlights, grille, bumpers, and tail-lights, and revised trim. Look for it here early next year.