The Holden Captiva LT AWD fails to make a captivating argument for why you’d bother over other, more composed competitors.

IF A WEEK is a long time in politics, then a decade is an eternity in the fashion-driven world of SUVs. Yet that’s how long the basic Holden Captiva model has been with us, the South-Korean-built five- and seven-seater soldiering on with just one major facelift and a couple of upgrades along the way. To say the basic product is starting to look and feel its age is no stretch of the truth.

This mid-spec Holden Captiva LT V6 translates to an all-wheel-drive version of the long-lived GM Theta platform with the same Melbourne-built 3.0-litre V6 as seen in its Commodore stablemate since 2009. Holden claims 190kW and 288Nm but, in the real world, the Captiva’s performance is weak. The main problem is a lack of low-end grunt and, with a very lazy throttle calibration in Eco mode (to which our car defaulted to at every opportunity) there’s a constant need to be slamming the accelerator pedal floorward to extract anything like major thrust. And yet at other times its engine surges, despite the driver’s efforts to keep throttle inputs smooth. It’s one reason the Holden was the thirstiest of the bunch on test. The other reason is that maximum torque arrives quite late in the game (5800rpm, no less), requiring the V6 to be wrung out to its 7000rpm limit if you want to get serious.

Captiva’s transmission doesn’t help, either, and that lack of beans below 4000rpm means the six-speed auto is constantly hunting for a ratio, especially in hilly country where it feverishly roves between fifth and sixth, and sometimes even fourth. And it gets worse with a full load on board. 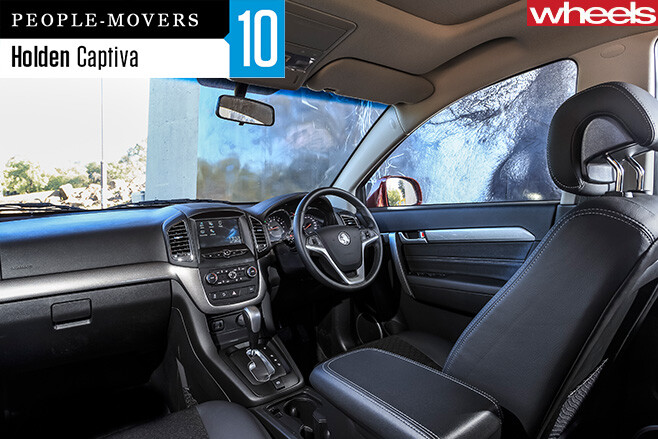 Captiva’s ride is reasonably well-damped, but it feels unsettled on less-than-smooth surfaces, promoting excessive head toss from its occupants, and there isn’t much in the way of steering feedback. It handles neatly, but without the connection to telegraph its reasonably high grip levels, the Captiva doesn’t really encourage you to go there. Its brake pedal is also wooden and lifeless.

On the road, Captiva looks and feels as if it’s short and quite narrow and, for once, appearances are far from deceiving. That’s felt most once you start to load a few bodies into it and discover the monster trade off in luggage space when all seven chairs are fixed into place. In fact, with just 280mm of space between the back of the third row and the tailgate, the Captiva is easily the shortest of this bunch. Now we know why you see so many Captivas towing small trailers during the school holidays. 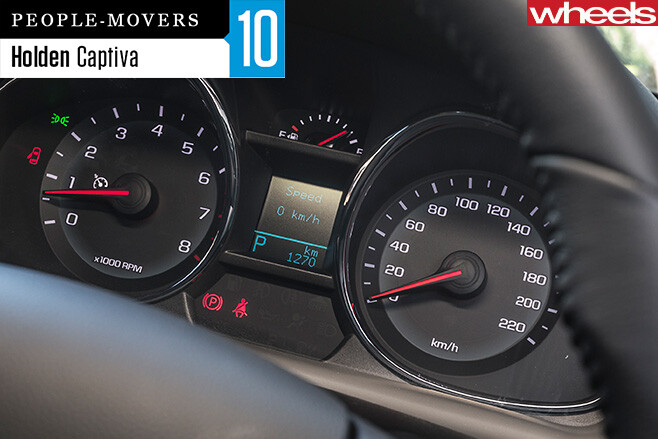 But is it, as in the VW Multivan, a case of the luggage compartment giving up centimetres to the good of third-row legroom? Er, no. Seats six and seven are really for kids only. It feels a bit third-world back there, too, with no air vents and just one cup-holder (on the left) for the kids to fight over (and they will). The second row is better with a reclinable backrest and a central armrest, though still no air vents, but it’s the front row that really drops the ball. Uncomfortable seats with backrests that weirdly bow in and out, developing-market plastics, and a parts-bin ambience make the Captiva feel like it should be wearing a $20K sticker.

There’s no doubt it will do the job but, frankly, the rest of the SUV world has moved on a bit. By about two generations. Woes in the second row

Plenty of these cars have evidence of having started life as left-hand-drive models. Gearshift graphics on the wrong side on the centre-console, volume knobs a huge stretch away, you name it.

In the Captiva, though, it’s a bit more annoying due to the way the second row of seats is laid out and how it affects useability. Basically, in order to get those in the third row out on the safe (kerb) side, two (rather than one) of the three second-row inhabitants have to jump out first for the second row to be tilted for access. The second row is simply split the wrong way round: 60/40 left/right. It should be 60/40 right/left.