The Hyundai  Santa Fe better at pleasing its driver, rather than shifting a tribe of seven

IF THERE’S one vehicle that clearly stands out as a driver’s express among this motley crew, it’s Hyundai’s Santa Fe.

Tuned in Australia to deliver precise handling and some enthusiast appeal, this limited-edition ‘30’ (see sidebar) introduces Hyundai’s punchy 3.3-litre petrol V6 to the Series II Santa Fe line-up for best-in-class acceleration to back up its sporting claims. Thing is, it could be argued that the excellent Mazda CX-9 is also a driver’s car – one that manages to spread its talents across a broad field covering ride quality and refinement, as well as driver appeal. And that leaves the handling-biased Santa Fe high and dry if we’re viewing these chariots in a seven-seat context.

On its lonesome, the sharp-looking Hyundai has enough sex appeal to reel in surfing and adventure types looking for an SUV not hindered by any ‘old codger’ stigma. Handsome, masculine Mineral Blue paint and charcoal 19s are supported by hot-hatch-rivalling 7.6sec 0-100km/h ability and a chassis that’s quite chuckable and decently grippy, negating any concerns that the front-drive Santa Fe might struggle for traction (on bitumen, at least). 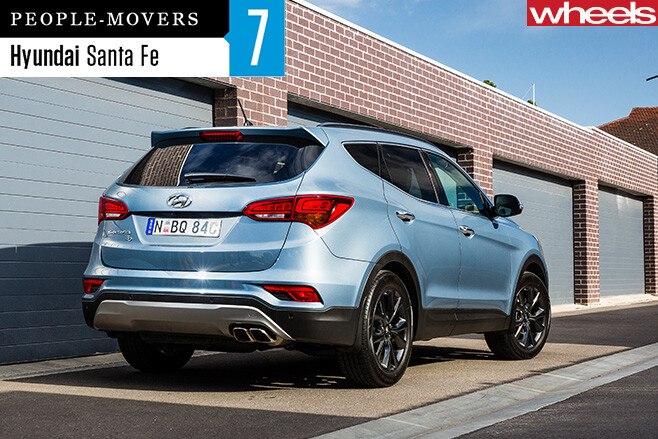 But then there’s the Hyundai Santa Fe’s steering, which is arguably too heavily weighted even in its default mode, and definitely a step too far in ‘Sport’. Combined with an oddly shaped steering wheel with overly fat spokes, and reach adjustment that doesn’t extend far enough, the Santa Fe almost trips on its own sneaker laces. And while it relishes enthusiasm in twisty terrain, its drivetrain isn’t quite on the same page, refusing a manual downshift until the tacho is showing less than 5000rpm, even though the V6’s rev ceiling is a heady 6850rpm.

The other downside is Santa Fe’s ride. Regardless of the surface, its suspension is constantly busy, jostling away underneath like a massage function, though it recovers beautifully from the big hits that country Australia can still deliver, and it’s reasonably quiet. Yet despite leather facings in this tricked-out variant, Santa Fe’s front seats rate only average for comfort, beaten by the middle row for under-thigh support (if not lumbar support), and trounced by the Kia pews for generosity of padding. 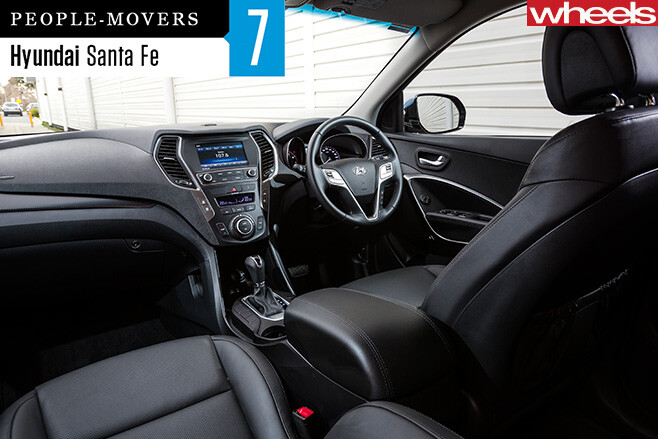 Still, could be worse. You could be sentenced to Santa Fe’s third row. Styling’s gain is clearly at packaging and vision’s expense, since the rear section offers far-from-adequate vision or headroom. It’s like being below-deck on a U-boat, though air vents with a three-position fan save it from being complete claustrophobia. You’d only ever put kids back there, unless you really dislike your in-laws that much.

The rest of the Santa Fe’s interior is quite liveable. Nothing class-leading, mind, but a distinctive (if plasticky) dash design with functional controls and neatly symmetrical his-and-hers switch blanks. It lacks the colour and design flair of the better cabins here, but even when drenched in sombre charcoal tones, the Santa Fe feels far more cheerful and upmarket than the Captiva or Pathfinder. What ultimately kills the Santa Fe under such focused seven-seat scrutiny, though, is its sizing. With a shorter wheelbase than even the Holden Captiva, and significantly less interior room than its newer Kia Sorento relative, the Santa Fe simply doesn’t have the real estate to tackle the breeder market head-on.

But as an appealing, double-income-no-kids SUV, where fur babies and Ikea visits might take preference, the Santa Fe 30 is bloody good value and a good drive to boot.