An odyssey is an ‘epic journey’. Unfortunately for the Japanese carmaker, the story of the Honda Odyssey has been one of a downward slide.

HONDA seems to have, at last, turned a corner, with models like the latest Honda Civic demonstrating that the one-time ‘Fear of Europe’ can again deliver progressive and enjoyable cars.

So in finishing ninth, the fifth-gen Odyssey – launched in 2014 – clearly isn’t one of them, even if it does subscribe to the Japanese company’s ethos of efficient engineering and easy operation. 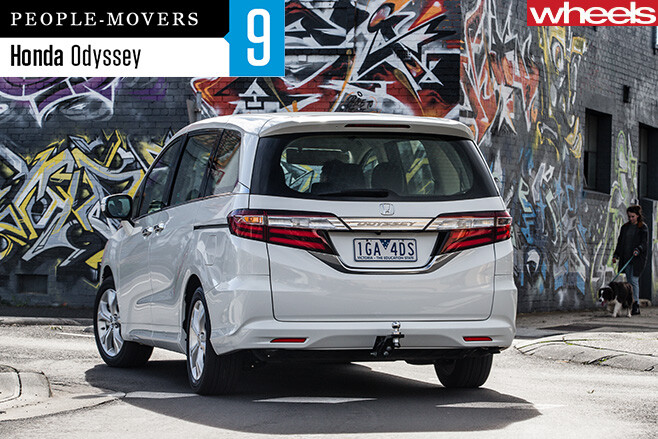 Strong points first. The 129kW 2.4-litre four is a keen and lively performer, despite being bound to a CVT transmission that encourages economy over excitement. In a typical Honda manner, it relies on revs to really get moving (loudly), but driveability is impressive and mid-range acceleration is sparkling, aided by a pair of paddle-shifters that help keep the pace percolating nicely.

Additionally, while light enough for ferrying kids in heavy traffic, the steering also responds with more conviction than Odyssey’s drowse-inducing styling might suggest, backed up by precise and flat handling (the upshot of a low centre of gravity) and impressive braking capability. This is a surprisingly capable machine to point and shoot through a corner, particularly at speed. Thought, too, has been expended on the Honda Odyssey’s elegant dashboard, facilitating a welcoming driving position, a clear view forward, legible instruments, good ventilation, and a nifty retractable lower shelf that allows for squeeze-through access to the second row when it isn’t used for storing, plugging in, or charging stuff on. Perched up high, the driver certainly feels in command.

However, even with keen $37,610 pricing, and a generous bounty including a reverse camera, offside electric sliding door, and 17-inch alloys, the Odyssey VTi stumbles, and often needlessly. 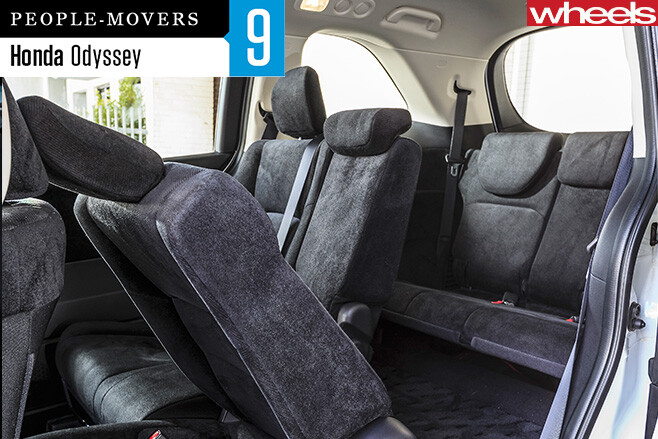 For instance, the front cushions are flat and shapeless. Oddball space-saver spare placement beneath them means the front floor kicks up just where adults or taller kids sitting in the 40/20/40-split middle row need their feet to be, forcing an uncomfortable knees-up position and undermining an otherwise well-sculptured bench that slides and reclines for added practicality. And Odyssey’s centre-row grab handles are laughably out of natural reach.

More frustratingly, in the absence of ISOFIX latches, using the inferior anchorage-point alternatives mounted above the third-row occupants means nobody other than the posthumous Marie Antoinette could actually sit there. Plus, despite protective shrouding, we fear taller craniums may come into painful contact with them during hard cornering. Why can’t Honda have just engineered every seat with in-built latches like everybody else? A total rethink is required. 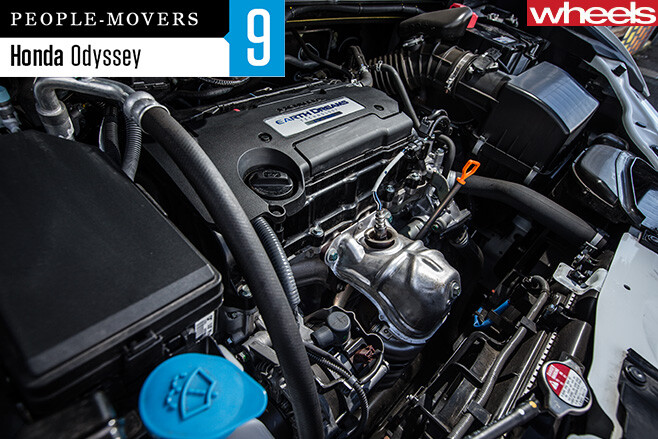 Additionally, Odyssey’s ride is constantly busy except on smooth roads, accompanied by too much road noise, despite thick floor mats fitted to our test VTi. Not coincidentally, the old double-wishbone rear suspension has given way to a cheap torsion beam.

Such cost cutting is disheartening because access to both rear rows is unimpeded, most essentials like air vents, lighting, storage, and 12V outlets are present, and the seat-folding system works effectively, turning this into a super-spacious two-seater wagon with an 1867-litre cargo hold if desired.

But the flair of previous models has disappeared. The original Odyssey was our 1995 Car of the Year, but this fifth-gen model smacks of cynical, expedient engineering. Talk about a disappointment.

WE’D recommend the $46,090 VTi-L with its seven seats over the base VTi eight-seater, since the three-person middle bench is binned for a pair of ‘Captain’s Chairs’ with ottoman leg rests. Besides being comfier, they feature self-contained child-seat anchorage hooks, meaning the third-row seats can be used since there won’t be straps reaching up to the back of the ceiling with a kiddie seat fitted.