Walter Rohrl takes us for a spin in the new Porsche 991.2 GT3 RS

As the curtain-call sounds for the 991-generation 911, rally legend Walter Röhrl demonstrates how a raft of revisions elevate the most focused atmo production Porsche into truly rare air

YOU CAN never quite tell with Porsche, but the second generation of the 991-series of GT3 RS could be the very last of the current 911 generation.

If all the rumours are correct and Porsche is true to form, it will reveal the all-new 911 (code-named 992) at the Paris motor show in October, seven years since the 991 made its global debut at Frankfurt in 2011. And the whole merry-go-round will kick off another cycle, during the course of which the world’s first hybrid 911s will be launched.

READ NEXT: Everything we know about the next-gen 992 Porsche 911

But back in the present day, it’s just possible that a few of you are scratching your heads not so much at the existence of this car, but its timing. It always makes sense to produce such cars at the end of the model’s lifetime because they draw attention not only to themselves, but the lesser 911s that might otherwise be starting to be overlooked in the marketplace. And that being the case, you’d naturally want to save the best, or at least the biggest, till last. 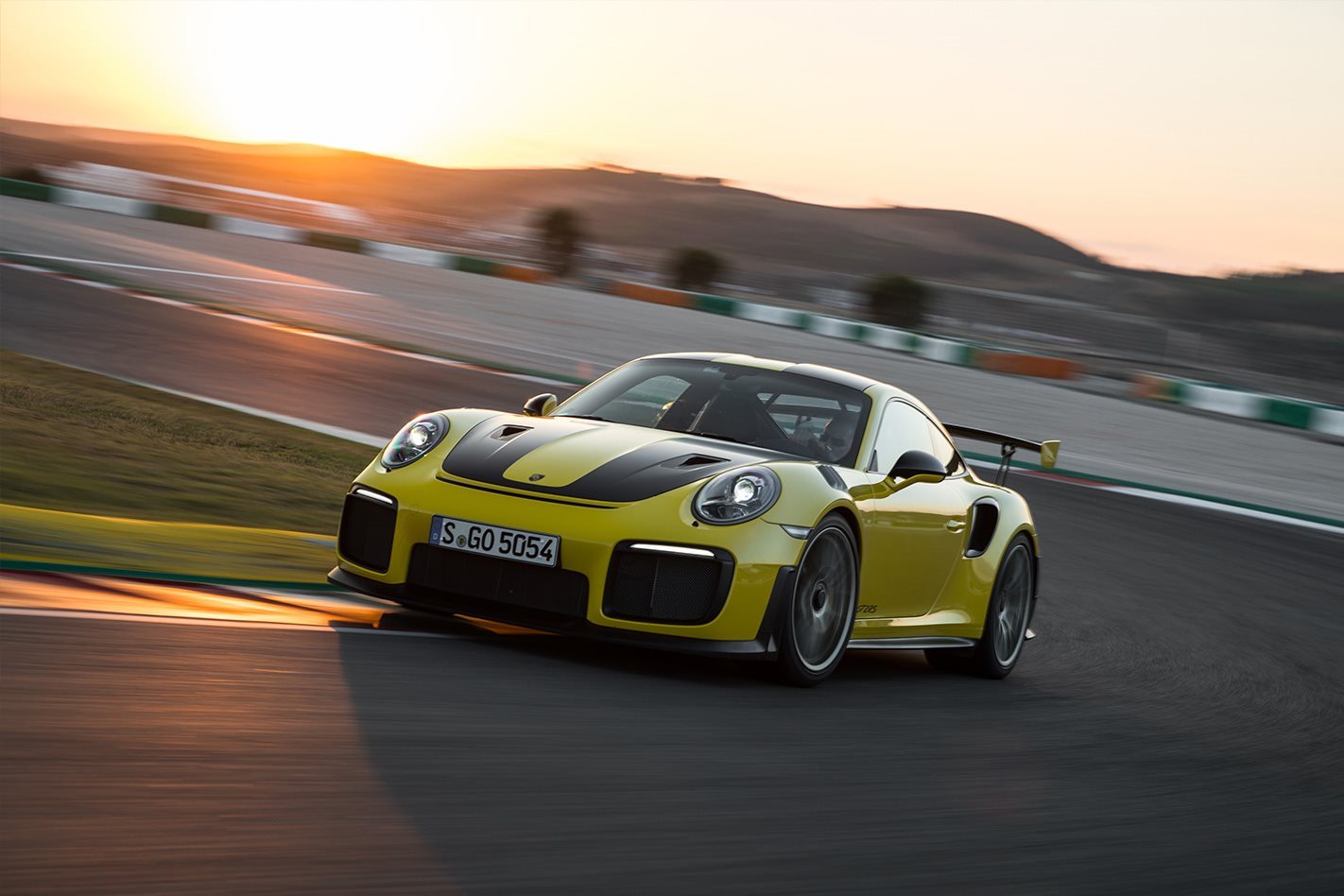 But that car would be the Porsche GT2 RS, which was already launched to universal acclaim last year. Remember when Porsche replaced the 997-generation with the 991? It was the 997 GT2 RS that was naturally last to be launched.

In fact the reason this GT3 RS appears to have been delayed seems to be a combination of the weather and a Lamborghini.

And I’m not kidding.

Manufacturers don’t just throw these cars out whenever they are ready, they are released in accordance with a carefully coordinated marketing plan that, in normal times, would indeed have seen the GT3 RS predate the GT2 RS. 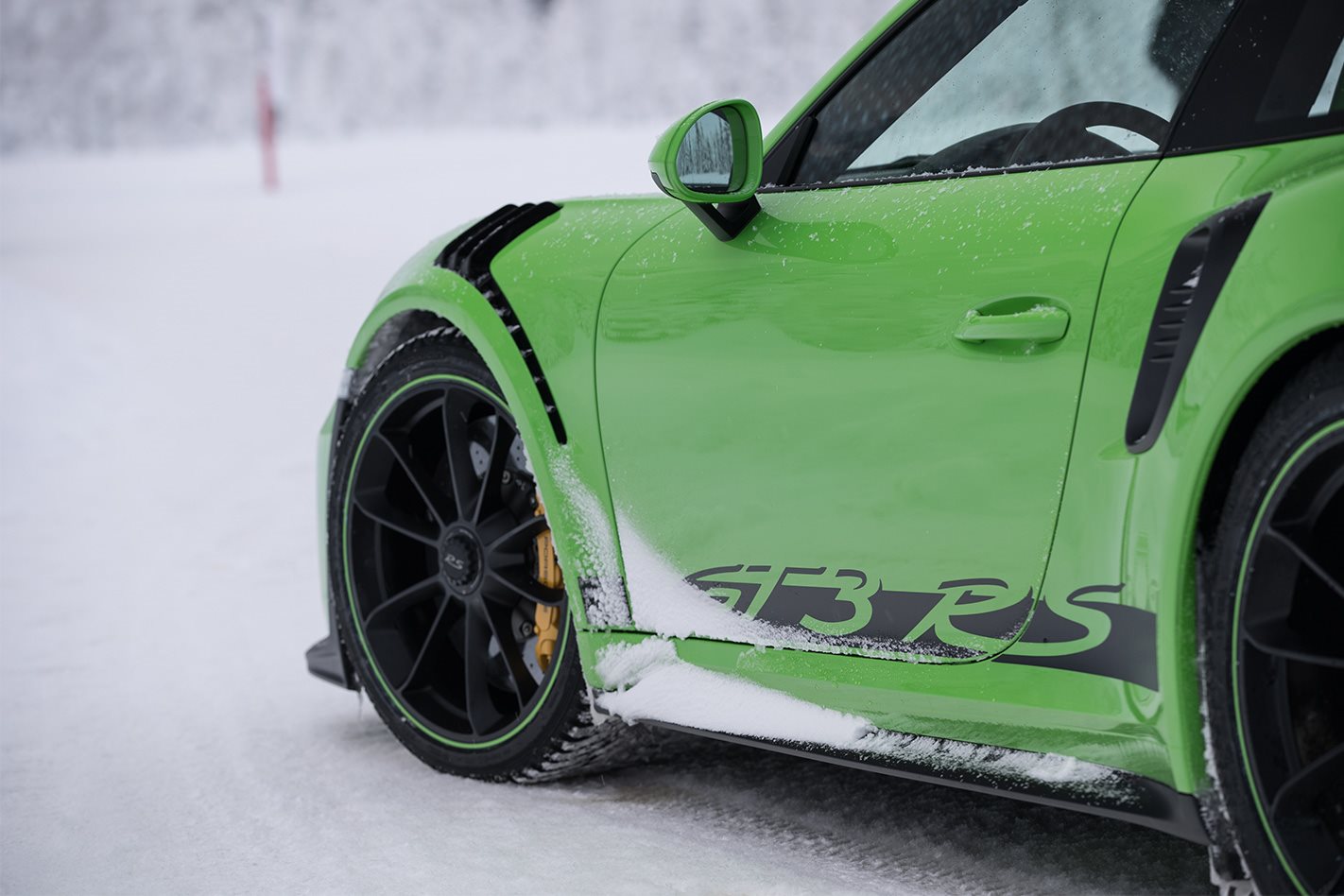 But Lamborghini produced a useful little device called the Huracan Performante and then, in October 2016, used it to blitz the production-car lap record at the Nurburgring.

For Porsche this was doubly bad news: first, it was Porsche’s own 918 Spyder whose record the Lambo snatched, and secondly, if a normal launch schedule was maintained, Porsche would have nothing with which to reply to its in-house rival until early 2018, which was not only almost 18 months later but also a time of year when the ’Ring tends to be under several feet of the white stuff.

Something had to be done, and that something was to swap the launch dates of the GT2 RS and GT3 RS around. And late last September, just before the weather window closed, the GT2 RS went and obliterated the Huracan’s record to sighs of profound relief all around Weissach. 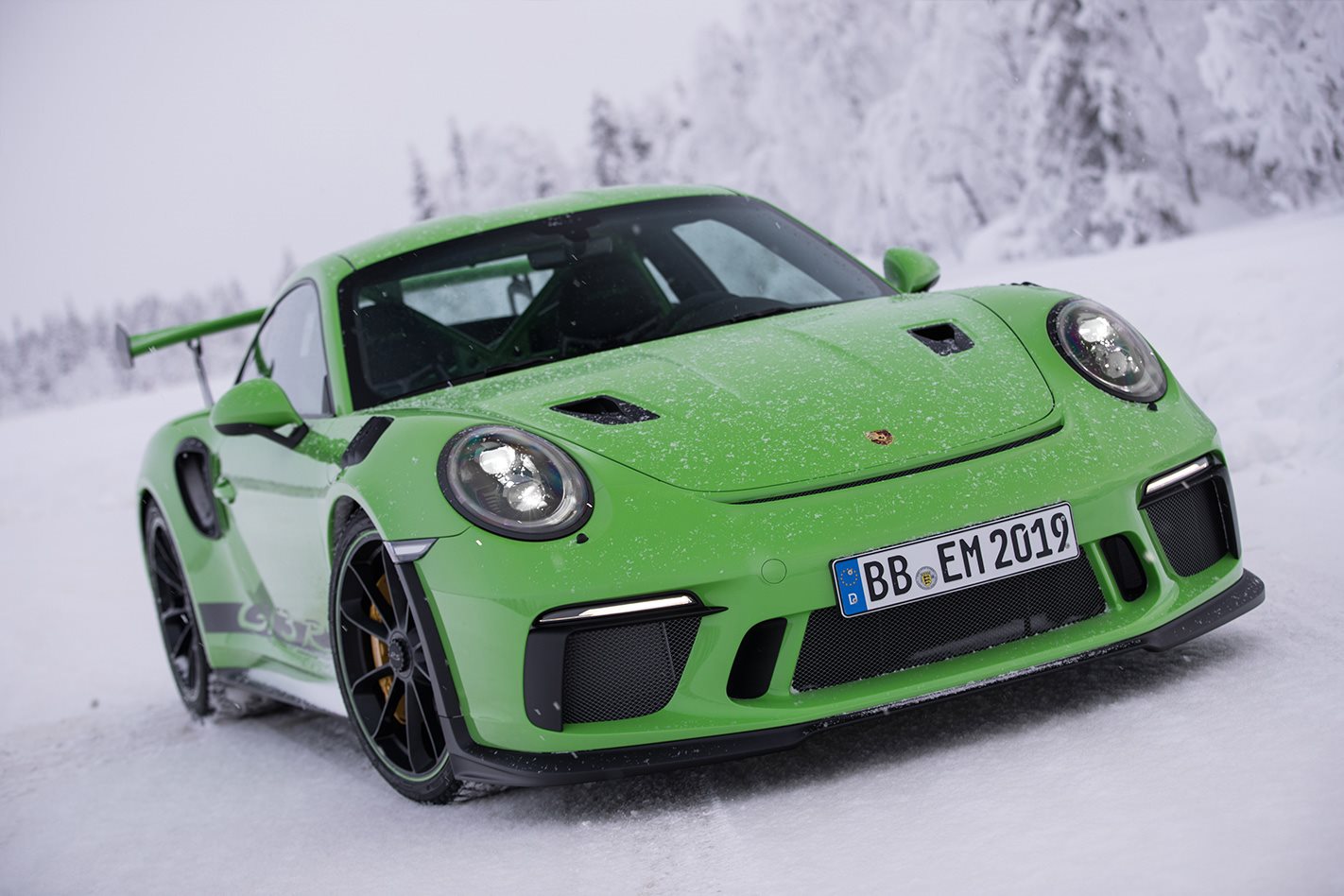 Do not, however, regard the GT3 RS as any kind of damp-squib finale. Less powerful than the GT2 RS it undoubtedly is, it contains much of the same engineering, has a very similar look, possibly the best-sounding engine on sale and a price tag of $416,500, some $229,000 less than the GT2 RS. Think of it as a normally aspirated GT2 RS and the value is not hard to see.

Like the previous ‘gen 1’ 991 GT3 RS, this car remains very much the track-honed option; a downforce-optimised, stripped-out, dual-clutch-only weapon with an ultra-aggressive look, especially in the new ‘Lizard Green’ paint in which Porsche presented it to us in Lapland.

The engine remains the same 4.0-litre flat-six used in the previous GT3 RS and current GT3, but its output has been tickled up 15kW to a claimed 383kW, not by changing any of its internals, but through careful optimisation of its respiration via inlet tracts, exhaust system and engine management. 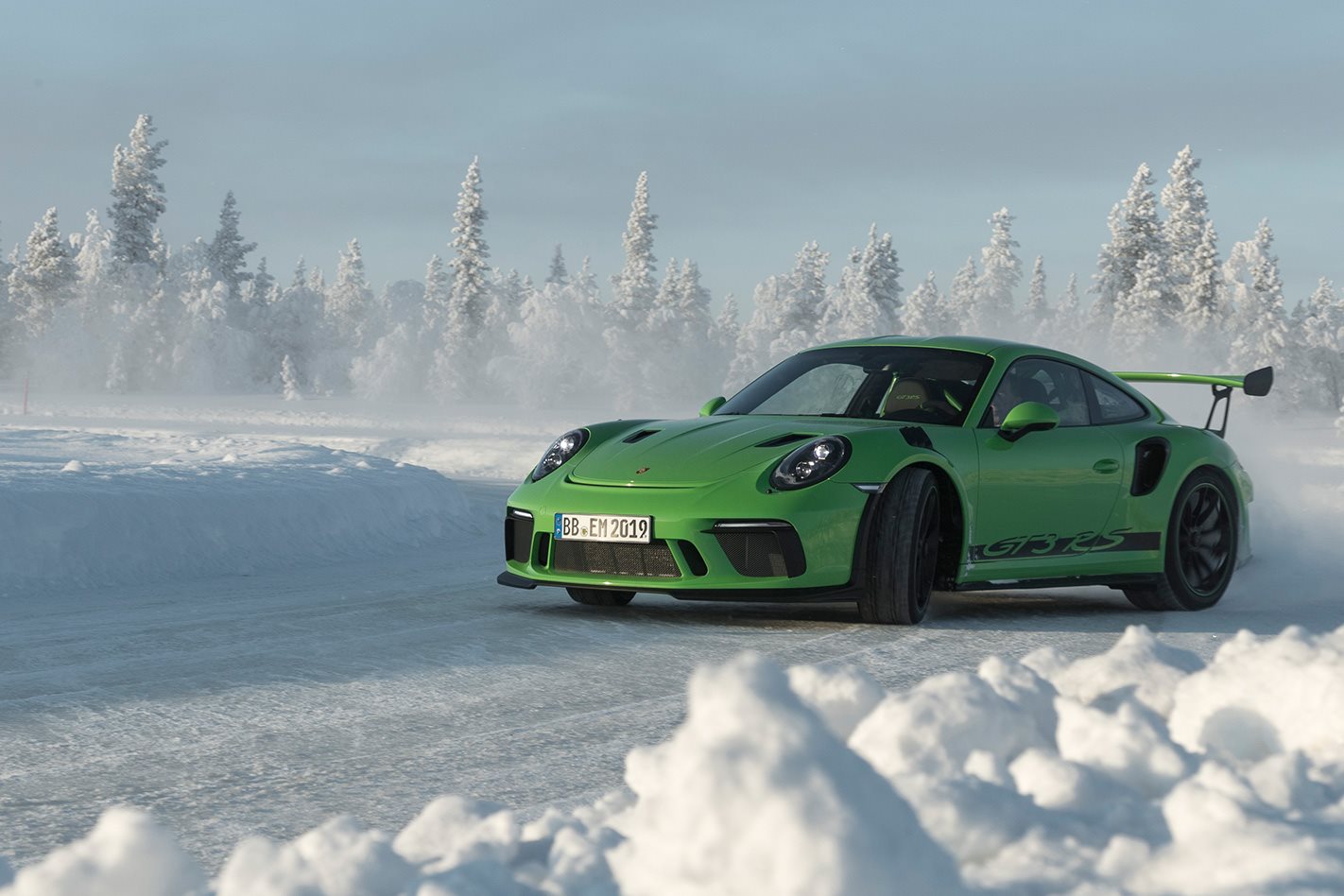 Power remains roughly the same as a GT3 until around 4500rpm, whereupon the RS’s better breathing makes an increasingly large difference all the way to the 8250rpm power peak. Maximum revs remain at a fairly insane 9000rpm. The seven-speed dual-clutch gearbox retains the same ratios and final drive, but has some strengthened internal components for greater on-track durability. The 0-100km/h time is a claimed 3.2 seconds; top speed 312km/h.

Some sense of the influence of the GT2 RS on this car can be seen in the suspension, which is essentially carried over from its turbocharged sibling, meaning its front spring rates are double those of the old GT3 RS and 40 percent stiffer at the back. Essentially the Weissach engineers started with something close to a full racing car set-up and worked their way back until reaching a point where the car was usable on the road. Almost every union, front and rear, is rose-jointed. It also comes with completely reprogrammed four-wheel steering.

The car leans heavily on the GT2 RS for its aero pack too, including a new bonnet containing NACA ducts for additional brake cooling purposes. Porsche won’t say just how much downforce the new car generates, but it’s believed the goal was not a massive increase over the outgoing GT3 RS, but to deliver a modest improvement along with a reduction in drag, which is pretty much the holy grail in aero engineering terms. 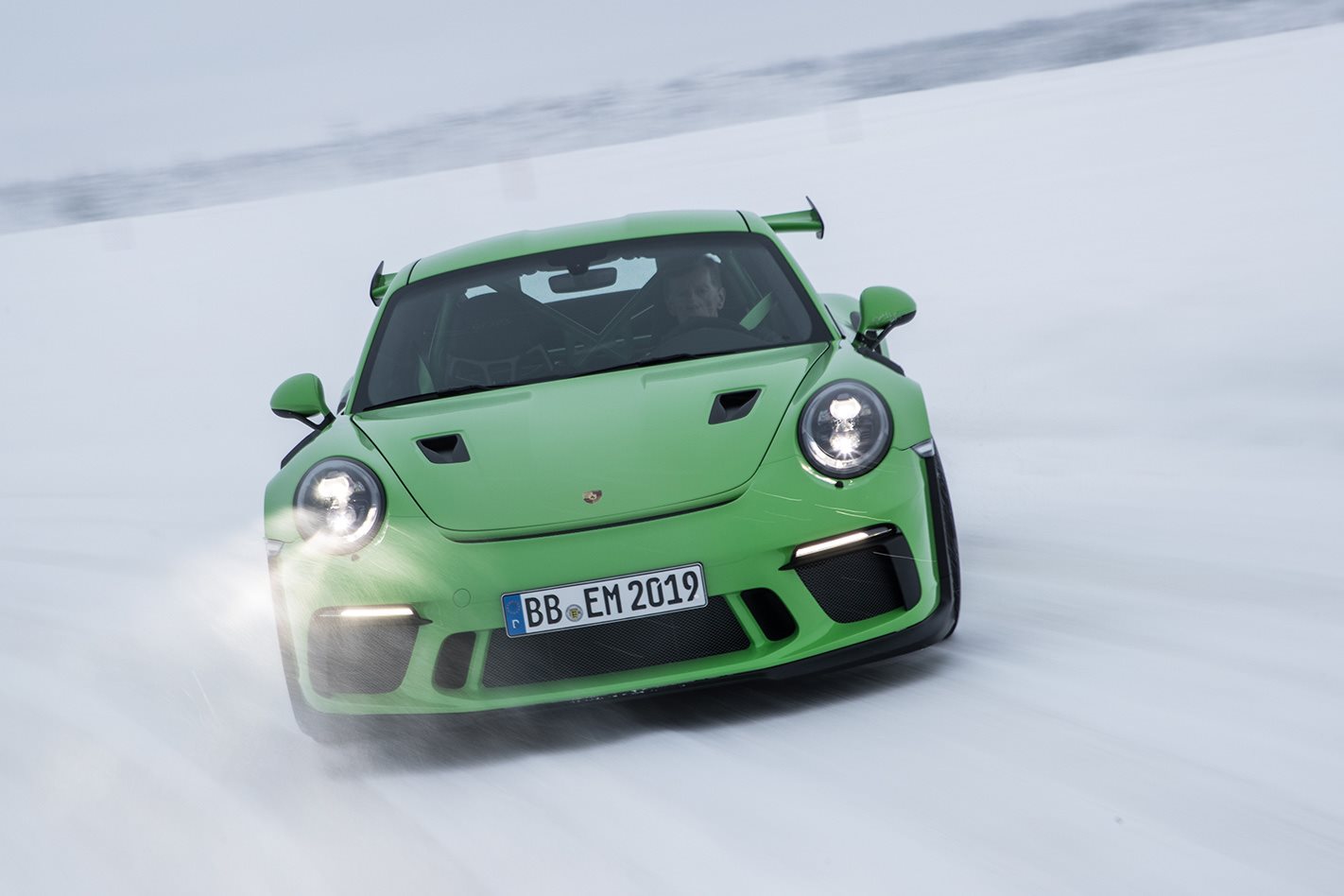 As with the last GT3 RS, the bonnet and front guards are made from carbonfibre while the roof is magnesium, but there is a Weissach pack that can be added, the principle element being a roof featuring a carbonfibre sandwich construction, along with optional forged magnesium wheels. In its lightest (and dearest) possible configuration, Porsche claims a weight of 1430kg.

As a result of all these modifications, it is quietly anticipated within Porsche that the new GT3 RS will prove itself to be around 10 seconds per lap quicker than its predecessor around the Nurburgring.

While I’d love to tell you how the car drives, Porsche deemed it too early to allow the press behind the wheel, so relegated me to the passenger seat next to double world rally champion Walter Rohrl. 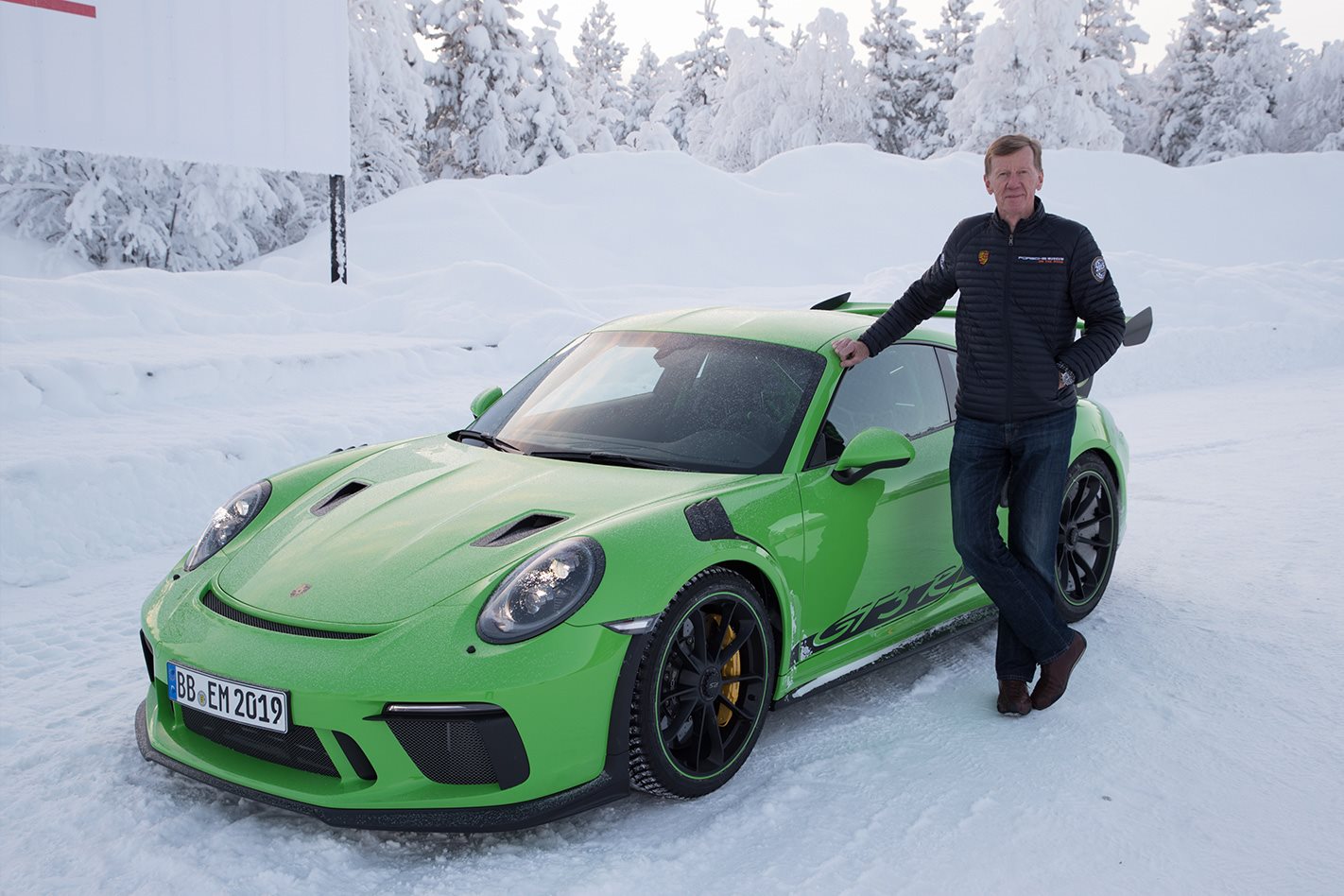 Even then I should have been able to impart some sense of how quick the car felt, however the venue for my ride was a track cut into the ice at Porsche’s Winter Driving Experience in northern Finland. Here there was not enough traction even for Porsche’s all-wheel drive fleet to use all its power so the GT3 RS was hobbled from the start, even on sharply studded tyres.

For what it’s worth, the interior is exactly as you’d expect for such a car. Everything is stripped right back, a cage occupying the space where the rear seats would be in any normal 911. There are carbonfibre seats, GT3 RS badges, cord pulls for door handles and today, a brisk -28 degrees Celsius showing at the bottom of the right-hand dial.

Walter dispenses with the usual pleasantries, nails the power and with a shriek from the engine, we are propelled simultaneously forward and sideways. How does the new suspension affect the car? What’s the aero balance like? Does it feel any quicker? Good questions, which I wish I could answer. All I feel really qualified to tell you is that if there is a better sounding production 911 in existence, I’ve not heard it. 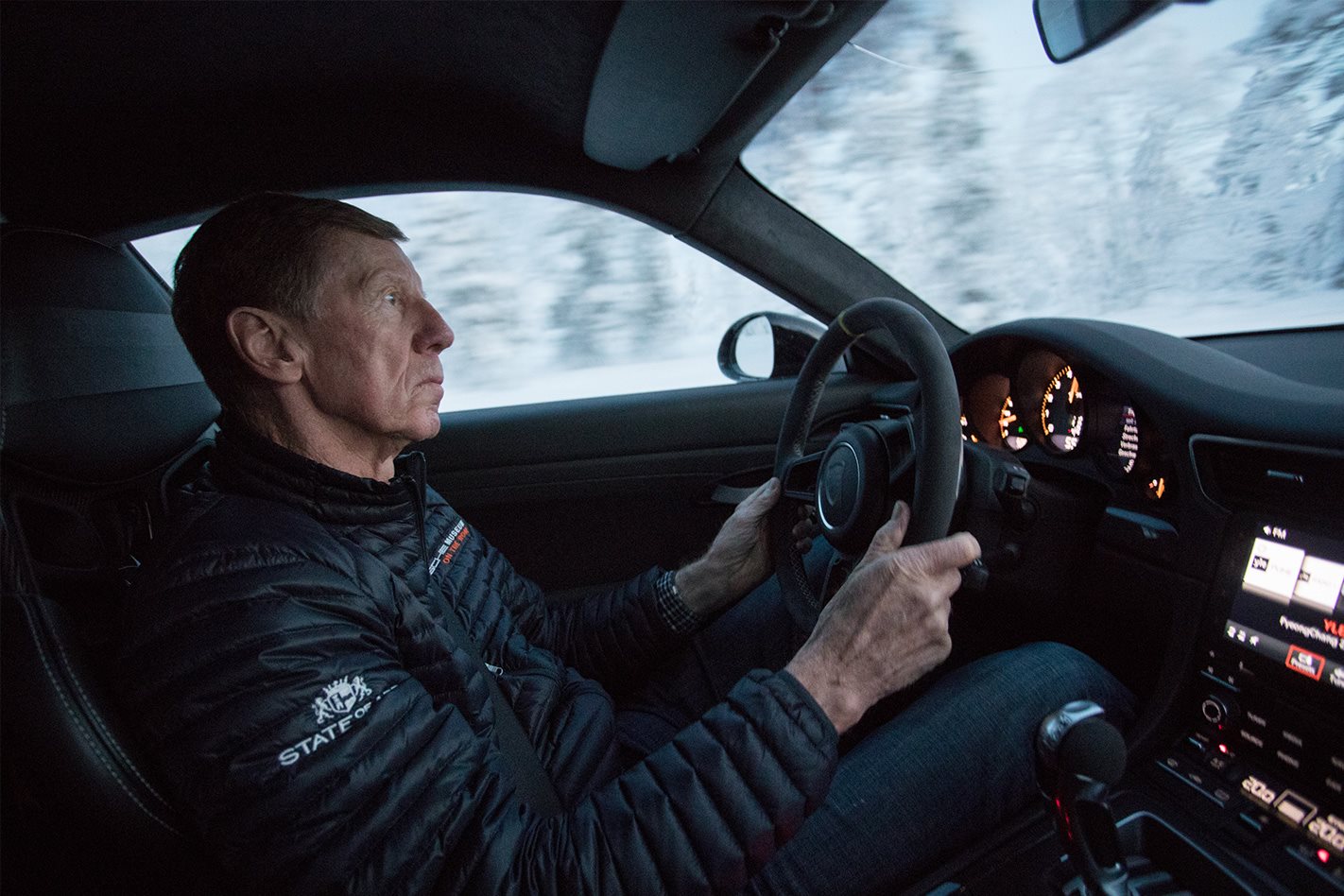 The noise this car makes is utterly hypnotic, and not just at 9000rpm, but right through the entire rev-range Rohrl was using.

It was almost as mesmerising as watching the man himself. Rohrl can anticipate exactly how the car will respond to any given input by instinct alone, which, when the car is never pointing in the same direction as that in which it’s travelling, gives him an insuperable advantage over us mere mortals who spend all our time reacting to and trying to manage the unexpected. He is always at least one corner ahead of the car.

I’m sorry not to be any more illuminating than this, though given what is known already of its constituent ingredients – it is essentially a blend of the old GT3 RS, current GT3 with a large chunk of GT2 RS thrown in, complete with its own little twist in the powertrain department – it would be almost unbelievable were the car not at least to match the expectations of its badge.

Sometime later this year we will let you know for sure. 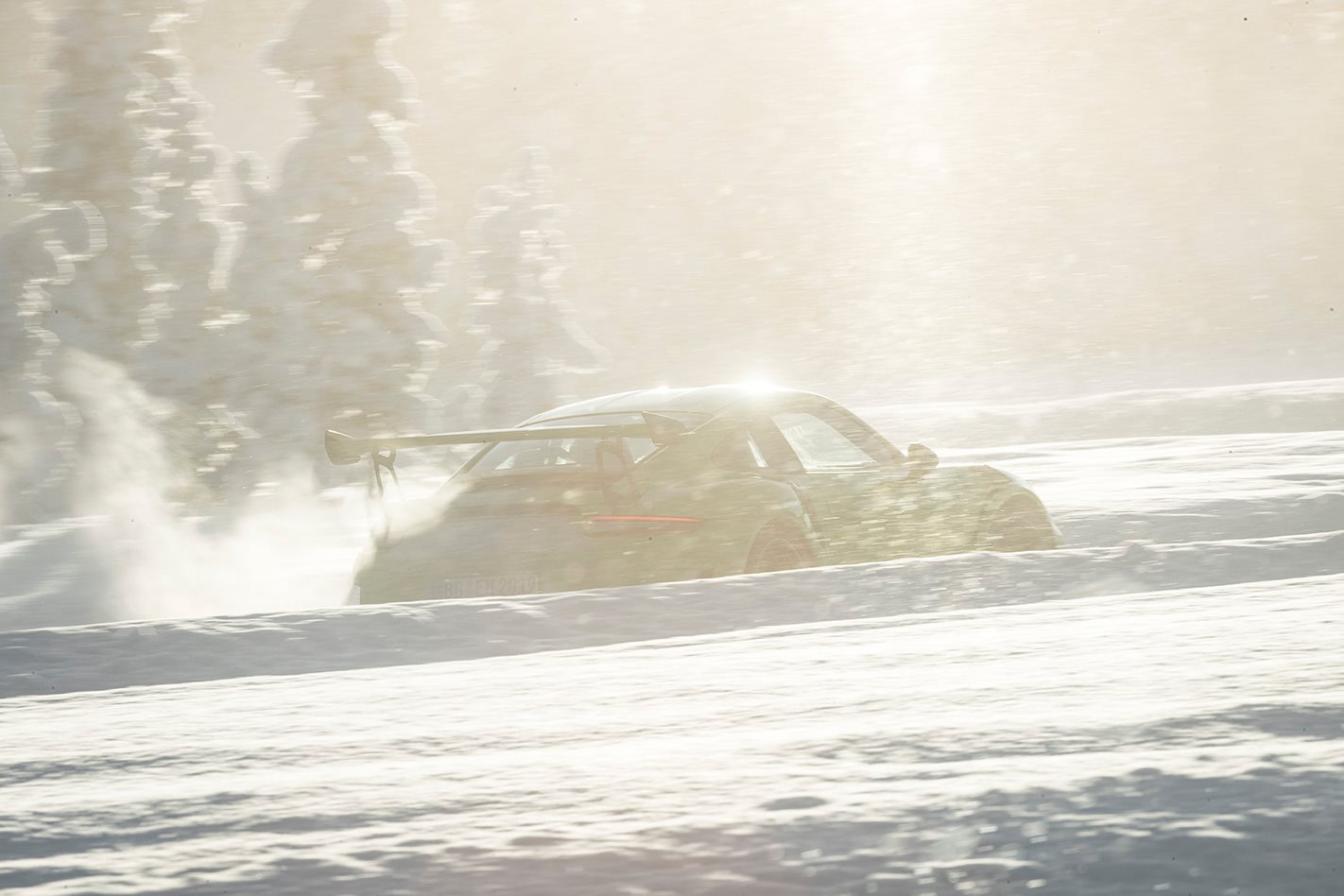