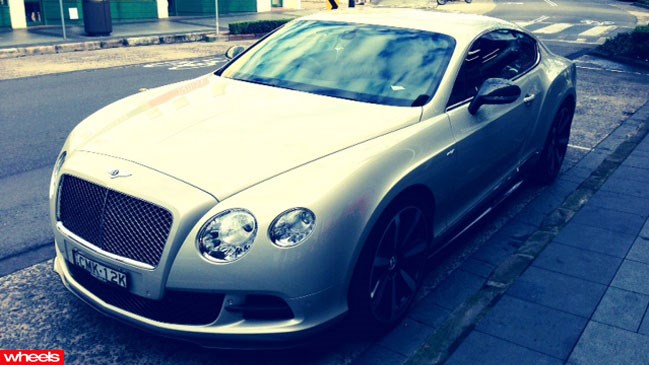 The feelings of solidity, massiveness, fine finishings, quality fabrics and even the nice Breitling clock on the mantel piece/dash, all make it feel like you've uprooted a bit of Darling Point, or Toorak, and taken it out on the road.

Cruising in this Bentley, as it is in all of their cars, is a silent wafting, effortless and pleb-flattening experience. You feel insulated from lesser mortals in their smaller, thinner cars, and thus superior. Which is what I imagine being rich enough to own one feels like every day.

The difference with the Speed is that it does crushing acceleration as easily as it does everything else. A 6.0-litre W12 engine with 460kW and 800Nm makes for proper progress, and a 0 to 100 time of 4.2 seconds, which is impressive for a mansion.

It's actually astounding when up I consider that the car weighs 2320kg, and the experience of moving that much bulk that quickly is quite unique. Flatten your Gucci loafer in the Speed and there's a moment of loin girding, as the physics of mass prepare to do battle with those of propulsion.

There's a feeling of enormous inertia being smashed through, and then immediately a feeling that this shouldn't be happening, and how on earth are you ever going to bring the whole thing to a halt again?

Fortunately the massive brakes are up to the task and, as disconcerting as it is the first few times, you soon learn to love the feeling of launching this cruise-ship missile.

Of course, no car this big and heavy is going to handle like a Lotus, it's still built more for comfort than the Speed it's named for, but it does a reasonable job in the bends, and a better one than you might expect.

We only had the big girl in our garage for two days, because Bentley loans are special like that, but they were two grand old days indeed.