It may be switching to all-wheel drive but the next-generation Mercedes-AMG E63 will still be able to slide thanks to the confirmed inclusion of a Drift Mode feature.

Mercedes-AMG chairman Tobias Moers confirmed to Australian media at the Paris motor show that the brand will even follow the Ford Focus RS and title its lairiest stability control and electronic differential settings ‘Drift Mode’.

Moers has said in the past he still wanted the E63 to be able to oversteer like the outgoing rear-wheel drive model, adding that it was critical for such a large car to be able to feel nimble. Now we’ve learned what the next large performance AMG sedan will offer when it debuts at the Detroit motor show in January.

“It’s really fast, it’s all-wheel drive standard as everyone knows, it’s right-hand drive as well and we’re going to have Drift Mode in that car,” Moers tells, before having a shot at Australia’s road ‘safety’ zealots who were outraged at the inclusion of such a mode on the Focus RS.

“Yeah maybe it’s banned in Australia,” he grins, adding that the variable all-paw system will be able to transfer up to 100 per cent of torque to the back boots. 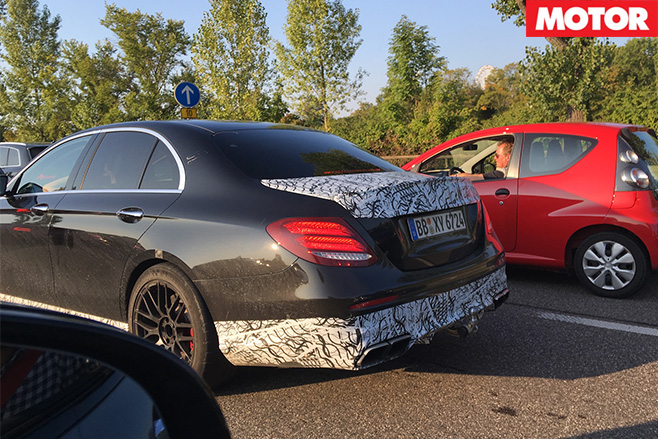 As we know the 430kW 5.5-litre twin-turbocharged V8 of the current model will be downsized to the 4.0-litre twin-turbo V8 unit AMG uses in the C63 to the GT. But two variants of the E63 will boast even more power.

“It’s going to be 600bhp [447kW] around, below and above,” Moers says. Even beyond that power figure for the expected E63 S model would place the AMG sedan well beyond the 430kW of the current highest-output 4.0-litre used in the AMG GT.

Claimed 0-100km/h acceleration will be “three point something” according to the AMG chairman who also believes the next E63 will take a step up in other ways.

“It is the biggest step we’ve ever made with an E-Class to be honest, in terms of styling, visibility of the car, presence of the car, it’s totally different than it used to be, tyre sizes, drivetrain, suspension, everything,” Moers claims.

“We’ve never made bigger steps in generation changes in the past.”