A Korean car blog has leaked images of what appears to be a production-ready version of the wildest four-door yet to wear a Kia badge – the twin-turbo V6-powered Kia GT.

Kia-world.net posted a single image showing an undisguised side profile of the car that’s already taken five years to jump from concept to something resembling what will appear in a new-car showroom. Other Kia GTs can be seen in the background. The sprung car shows many of the design elements built into the Kia GT Concept unveiled at Frankfurt in 2011. They extend to the near-vertical nose framed in deep side scoops, a visual element built into the front mudguard, and tail-lights that wrap in a thin strip around the rear haunches. Unlike the concept, though, the Nurburgring-hardened Kia GT appears to get four conventional doors instead of pillarless suicide rear doors. The near-production car also misses out on the heavily styled headlights, and the rear-facing cameras that replaced the side mirrors on the show piece. The front-engined, rear-drive GT, codenamed CK, is believed to share its underpinnings with the Genesis G70, the luxury arm of sister brand Hyundai. It is expected to use a 270kW twin-turbo 3.3-litre V6 in its more premium version, costing from about $50,000, with an entry-level version starting from about $40,000. 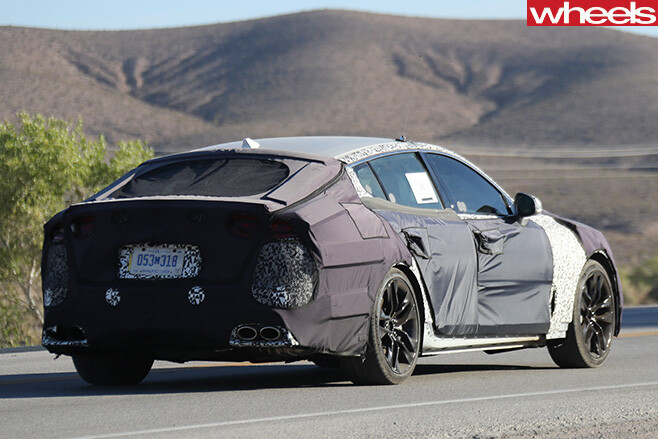 As Wheels reported exclusively earlier this year, we can expect the Kia GT to arrive here in time for the 2018 Australian Open – Kia is the naming rights sponsor for the international tennis tournament.