SMALL car, very big deal. The stunning interior of the all-new A-Class is a design, says Mercedes-Benz, fit for the digital age. But the new look is also expressively elegant.

It makes Mercedes-Benz’s current cabins look instantly old-fashioned, and is certain to take the new A-Class to interior design leadership in the premium small car segment.

Production of the fourth-generation A-Class will not start until March or April of 2018, and it will likely arrive in Australia around June. But Mercedes-Benz wants to whet appetites around the world, so they staged a sneak peek at the A-Class interior for select media in Stuttgart.

With a freestanding widescreen display for instruments and infotainment, Mercedes-Benz designers could creatively rethink the form of the entire instrument panel. With no need for the traditional instrument cluster cowl, they came up with a flat-topped, two-layer design. At the same time, designers replaced the familiar Comand infotainment system’s twist-and-press pointing device in the centre console with a touchpad and wrist rest. 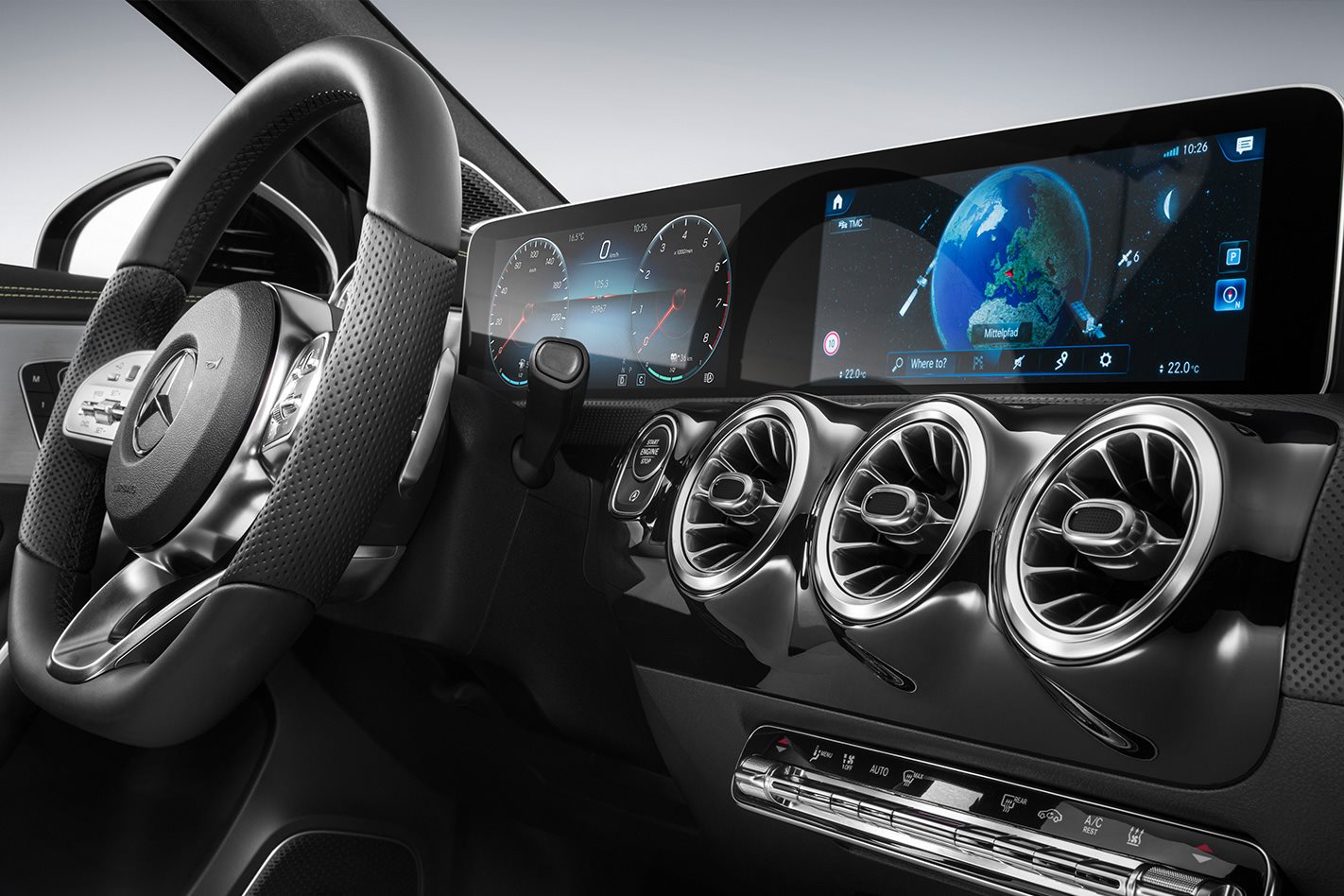 The layered look of the instrument panel was designed with ambient lighting in mind. The “trench” between the slim upper layer and the bulkier bottom section of the dash is the perfect place for LED lights that glow in 64 colours, enhancing the floating effect.

The basic bones are visually simple, but the details add opulence. “I believe this is the most beautiful air vent available,” says Hartmut Sinkwitz, indicating one of the five outlets in the A-Class’s instrument panel. “It took some time to make them possible,” adds the interior design director, who admits they’re not cheap to make. Other brands may have even more costly vents, says Sinkwitz, but none look better.

Those air vents are one of only two pieces of the interior shared with other Mercedes models. They also feature in the cabin of the updated version of that style throwback, the G-Class off-roader. And the new Mercedes-Benz A-Class’s three-spoke steering wheel is the same as that in the recently updated S-Class luxury sedan. 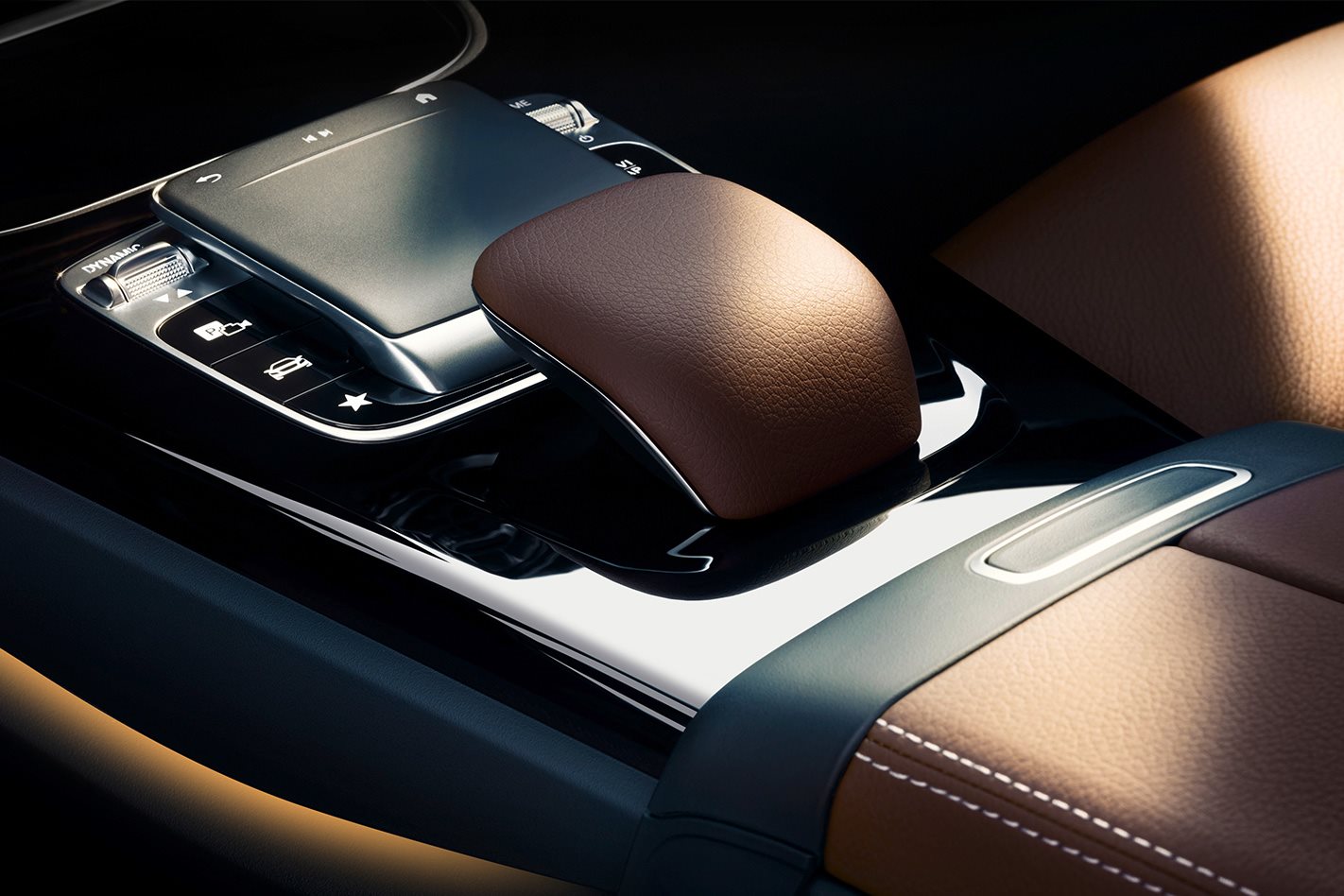 Mercedes-Benz interior design director Hartmut Sinkwitz says the new A-Class’s touchpad is superior to the gesture control tech favoured by a competitor. Twirling a finger in a circular motion near the centre screen in recent BMWs should turn audio volume up or down, but it doesn’t always work this way. “We are not in favour of gestures,” says Sinkwitz.

There’s logic in Mercedes-Benz’s decision to launch the interior look that will gradually spread through its range in the small and relatively affordable A-Class. It has a younger, more tech-receptive customer base. A study of attitudes to the new touchpad controller found younger age groups overwhelmingly liked it more than the old Comand wheel, says Sinkwitz. Older customers also preferred the pad, but only by a slender margin. 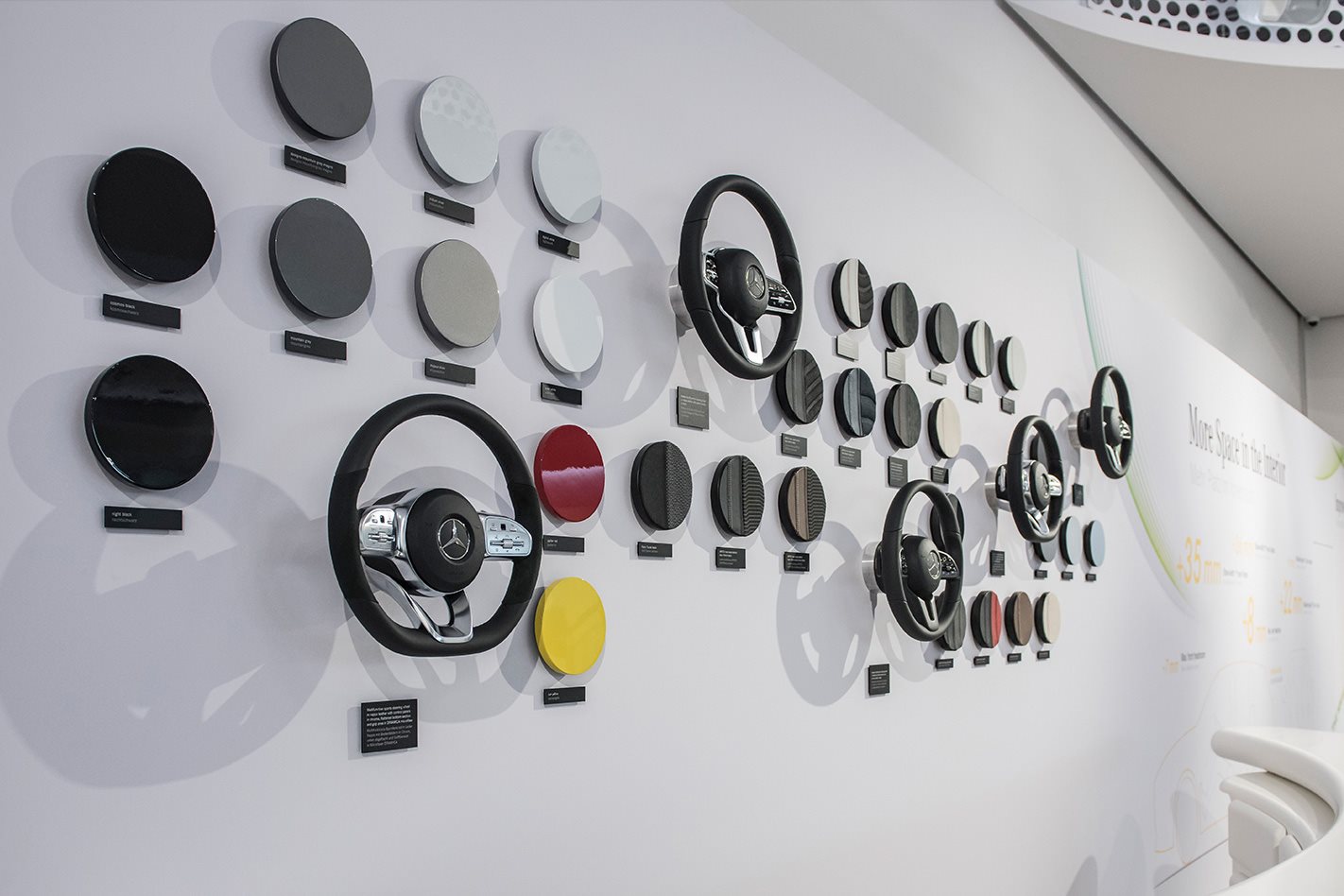 The car that media were allowed to examine in Stuttgart was a high-grade model. Not all A-Classes will have such an impressive screen. But even the most basic A-Class will come with a pair of seven-inch displays, says Sinkwitz. Mid-grade models will combine seven- and 10-inch displays behind a single piece of glass. Only top-grade A-Class variants will have a pair of 10-inch displays like that seen here, again behind a single piece of glass. 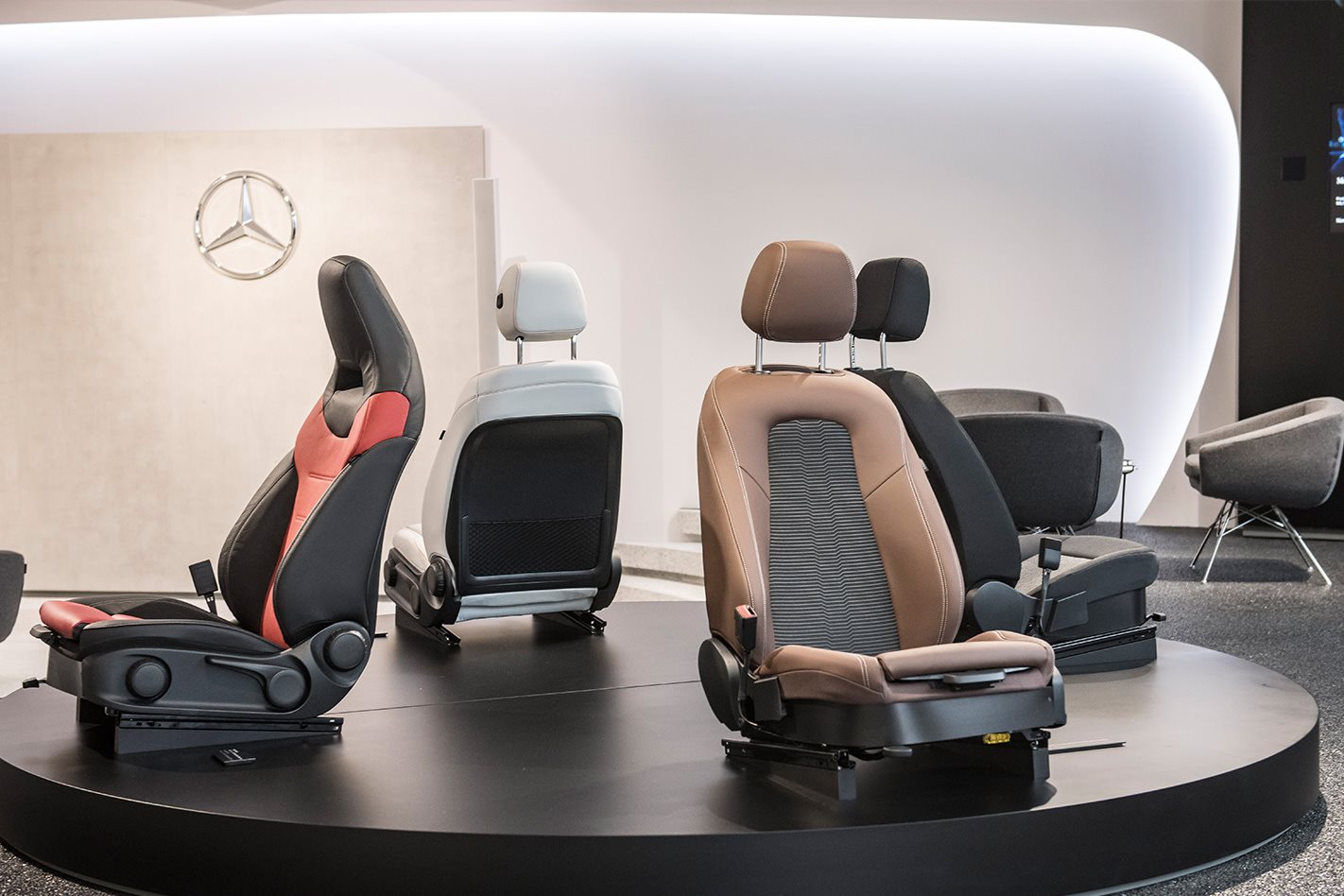 Climate front seats will be available in the new A-Class. It wasn’t easy to scale down this big-car comfort feature to hatchback scale, according to development engineer Heiko Thiel. The axial fans used in E-Class seats were simply too big, so a single compact radial fan had to be specially developed. The A-Class’s front seats are clean-sheet designs, says Thiel, and will come in basic, comfort and sports versions.

Design isn’t the only area of improvement. Owners of the previous generation A-Class, launched in 2012, complained about the car’s tight rear seat, visibility and luggage capacity. And they were right to do so.

Mercedes-Benz’s designers and engineers have taken the criticism seriously. The new A-Class, codenamed W177, makes improvements in all these areas.

The cargo compartment is slightly larger, better shaped and easier to access. There’s floor room for six standard German drink crates, up from four in the old model, and the loading aperture is larger. 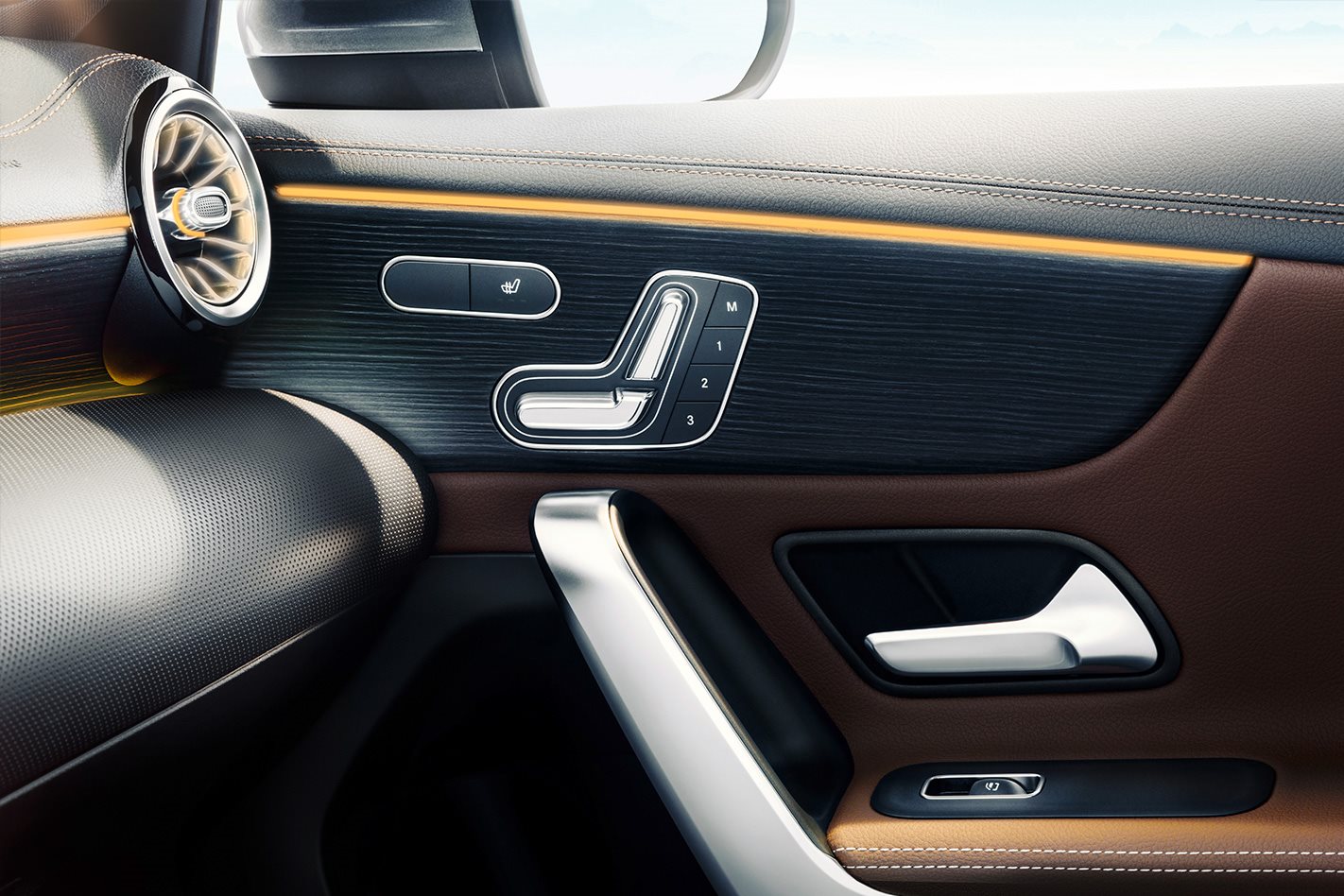 Door-mounted front-seat adjuster switches are a Mercedes-Benz trademark. They’ve been redesigned for the new A-Class using simpler shapes. The car’s doors also feature a new loop pull handle that’s as nice to use as it’s good to look at.

A 10 percent improvement in visibility is claimed. Slimmer A-pillars, realigned B-pillars and pared-down C-pillars make the difference. A side benefit of the latter is a larger door that makes rear-seat access easier.

Spaciousness is also slightly improved for all A-Class occupants in most directions. There’s a little more shoulder, elbow and headroom. 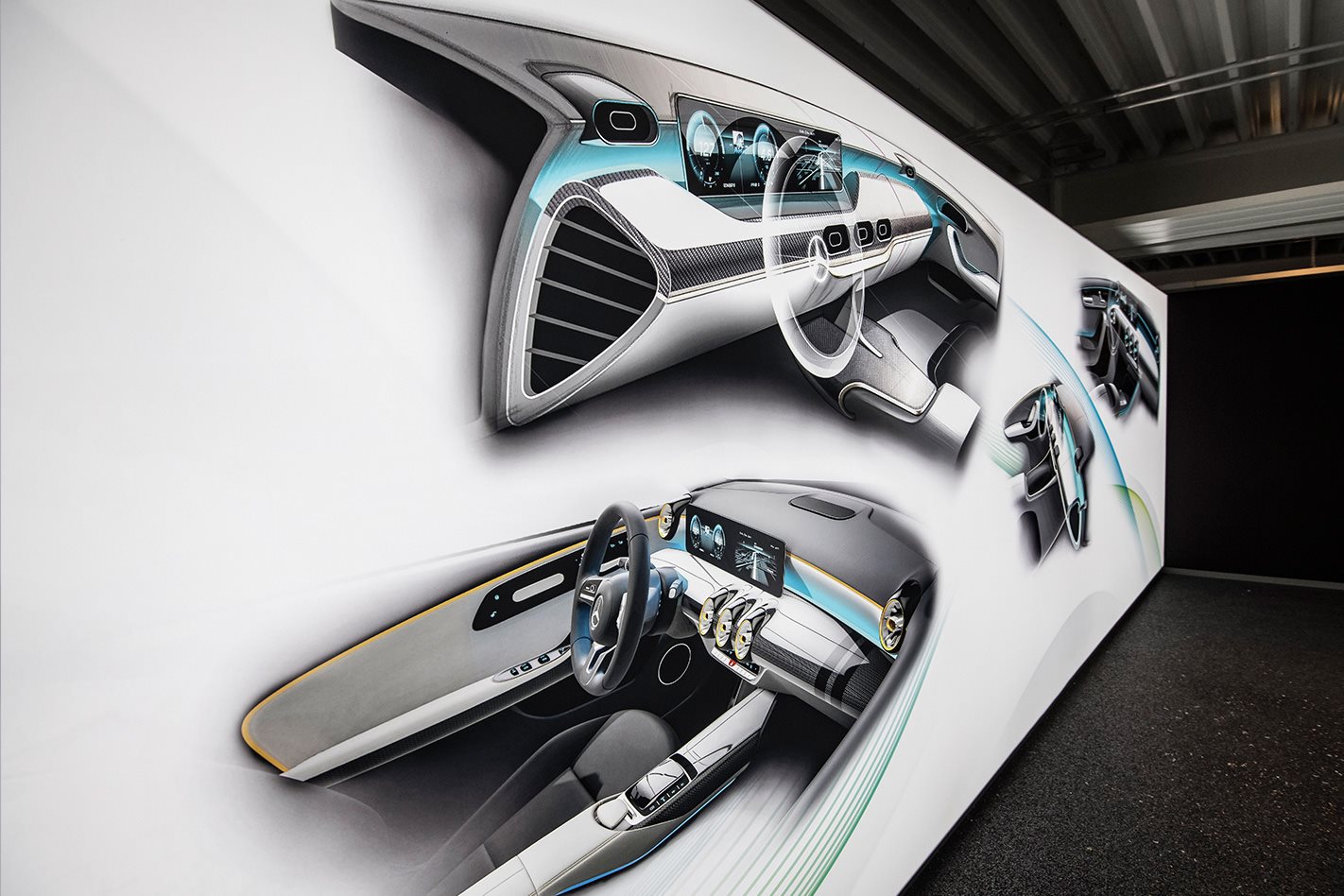 Mercedes-Benz engineers at the sneak peek in Stuttgart wouldn’t say if the new A-Class is a larger car on the outside than the W176 it replaces. It obviously will be. But the big story with the W177 will certainly be its interior…

Spark plug
The new A-Class family will be big. There are five variants of the current W176, including A-Class hatch, CLA, CLA Shooting Brake, GLA and B-Class MPV, but the new W177 family will be eight-strong, according to compact car product manager Dirk Kielhorn. Count on an EV, something like the EQA concept shown in Frankfurt in 2017, being among them. 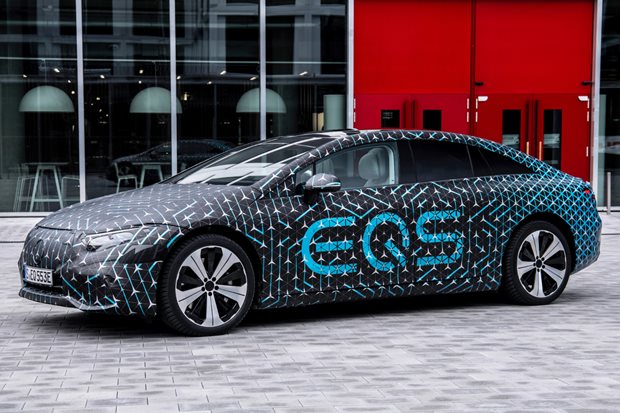