A RACY prototype spied lurking outside Subaru’s North American headquarters has raised hopes that the Japanese automaker is prepping a track-ready version of its BRZ sports car as an end-of-life special edition.

Camouflage is minimal, but Subaru has taken time to mask up the car’s cheek vents, fender accents and cover over an STI badge on the bootlid. The rest of the bodywork is standard BRZ fare augmented by STI sideskirt extensions and a front lip spoiler, while the rear wing is the most prominent addition. The wheels appear to be an iteration of existing rolling stock from the STI option catalogue, and are wrapped in Michelin Pilot Sport 4 tyres that offer more grip than the standard Michelin Primacy rubber. The presence of stickier hoops is a telling signal that this car is pitched at track day junkies rather than garden-variety enthusiasts. 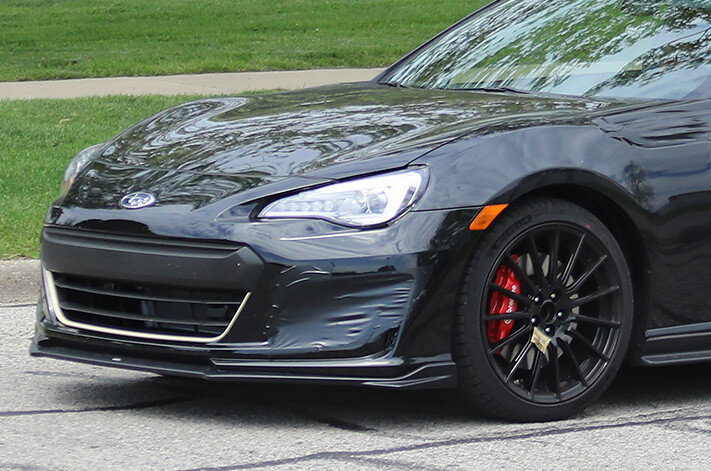 Exploiting the extra grip are a set of beefy Brembo calipers that replace the standard sliding calipers with four-piston items up front and two-piston ones clamping down the rear rotors. That said, these stoppers aren’t exactly new for the BRZ: they’re already available in Japan on the high-grade BRZ GT variant and as part of a special edition Sports Pack in Australia, where it’s also bundled with Sachs suspension, lightweight 17-inch alloys and blacked-out exterior trim.

This isn’t the first time Subaru has bolted on some race-style enhancements and a lairy wing to its sole rear-wheel drive offering either. The company sold the BRZ tS in Japan in 2015, with that car sporting a similar treatment with the same wing (albeit with smaller end plates), big brakes and stickier tyres. The formula has yet to be replicated outside of Japan, though. We can only speculate about what’s under the bonnet, but odds are low that there’s anything in the way of big power upgrades to the BRZ’s 152kW 2.0-litre flat four. Company execs have in the past stated that there’s little motivation to add a turbocharger to the BRZ’s flat four (mainly citing packaging issues with firewall and bonnet clearance) and previous form indicates a preference to enhance handling performance over adding power.

Its presence on American roads hints that an STI-enhanced BRZ is on a trajectory for US showrooms, but it’s unclear whether it will come here. Subaru’s local operation told Wheels that though there’s no timeline in place for a harder-core, big-winged BRZ for this market, sales of the MY17 model are already healthy enough with year-to-date sales growth of just under 42 percent. Track day specials simply aren’t on its radar just yet.