Alpina continues to introduce its performance-tweaked BMW range to Australia, with a fettled-7 Series dubbed B7 the latest to land priced from $369,720 plus on-road costs.

Alpina claims the B7 offers “class-leading performance figures in the segment of luxury performance sedans” with its 4.2-second 0-100km/h claim and 330km/h top speed. Audi may have something to say about that, though, given its more affordable (relatively speaking) $330K S8 Plus takes 3.8sec to reach triple digits, with 2kW and 50Nm less.

Read how the Alpina B7 compared to the Audi S8 and Jaguar XJR. BMW dealerships can also ask a further $50K over this Alpina B7 for the newly launched M760Li xDrive that coincidentally offers the same 448kW/800Nm from a 6.6-litre twin-turbo V12. Thanks to all-wheel drive, it can perform a 3.7sec benchmark speed sprint.

The B7 isn’t only about wafting straight-line speed, however.

While new pistons, spark plugs and exhaust system, and revised engine intake manifold, intercooler and turbocharger pressure take care of the lift in outputs, a new Sport+ adaptive suspension mode is an Alpina-only addition for this rear-wheel-driven tuner flagship. 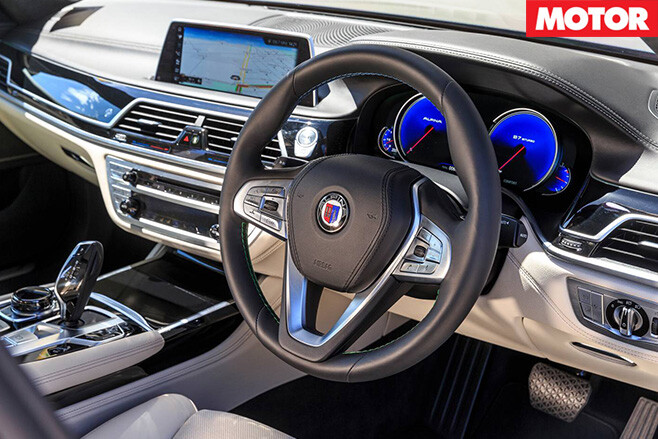 Note the 21-inch forged alloys that save 20 per cent on unsprung mass, Michelin Pilot Super Sport tyres, optional Drexler rear limited-slip differential, and already-standard four-wheel steering, and the B7 could be a genuine driver’s car.

Alpina badging front and rear, quad exhaust outlets and subtly menacing multi-spoke alloy wheels and bodykit, all round out the exterior changes to this stealth executive express that remains as opulent inside as its donor car.

At this price, though, there are a number of options for Madam or Sir to consider – both from within its own ranks, and those of Audi, Aston Martin, Bentley and Mercedes-AMG.