It may have had one of the longest gestation periods of any new vehicle release, but the Alpine A110 has finally been revealed as France’s challenger to the German Porsche Cayman, British Lotus Exige and Italian Alfa Romeo 4C.

Renault’s revered and revived racecar brand previously trickled in teaser images of its A110, and the production model looks true to the concepts we’ve seen past. Now, however, there are figures to back up its slinky form. The Alpine is 4178mm long and weighs just 1080kg, slightly larger and heavier than a 4C (3990mm/1025kg respectively) but smaller and lighter than a Cayman (4379mm/1365kg). Like the Alfa but unlike the Porsche, however, the A110 is a (in this case Getrag sourced) seven-speed wet-dual-clutch automatic proposition only.

The rear-wheel-drive two-door coupe uses a new 1.8-litre turbocharged four-cylinder developing 188kW of power and 320Nm of torque, delivering a claimed 4.5-second 0-100km/h and 249km/h top speed. And note the fuel filler flap on the front guard: the fuel tank is behind the front axle, while the engine is positioned in front of the rear axle. Normal, Sport and Track modes act on the engine, gearbox and electronic stability control (ESC) settings, as well as the noise emitted from the central single exhaust – although there are no suspension modes as the dampers are of the fixed variety.

The cabin design of the Alpine A110 appears to be more luxurious than an Alfa or Lotus, yet more minimalist than a Porsche. 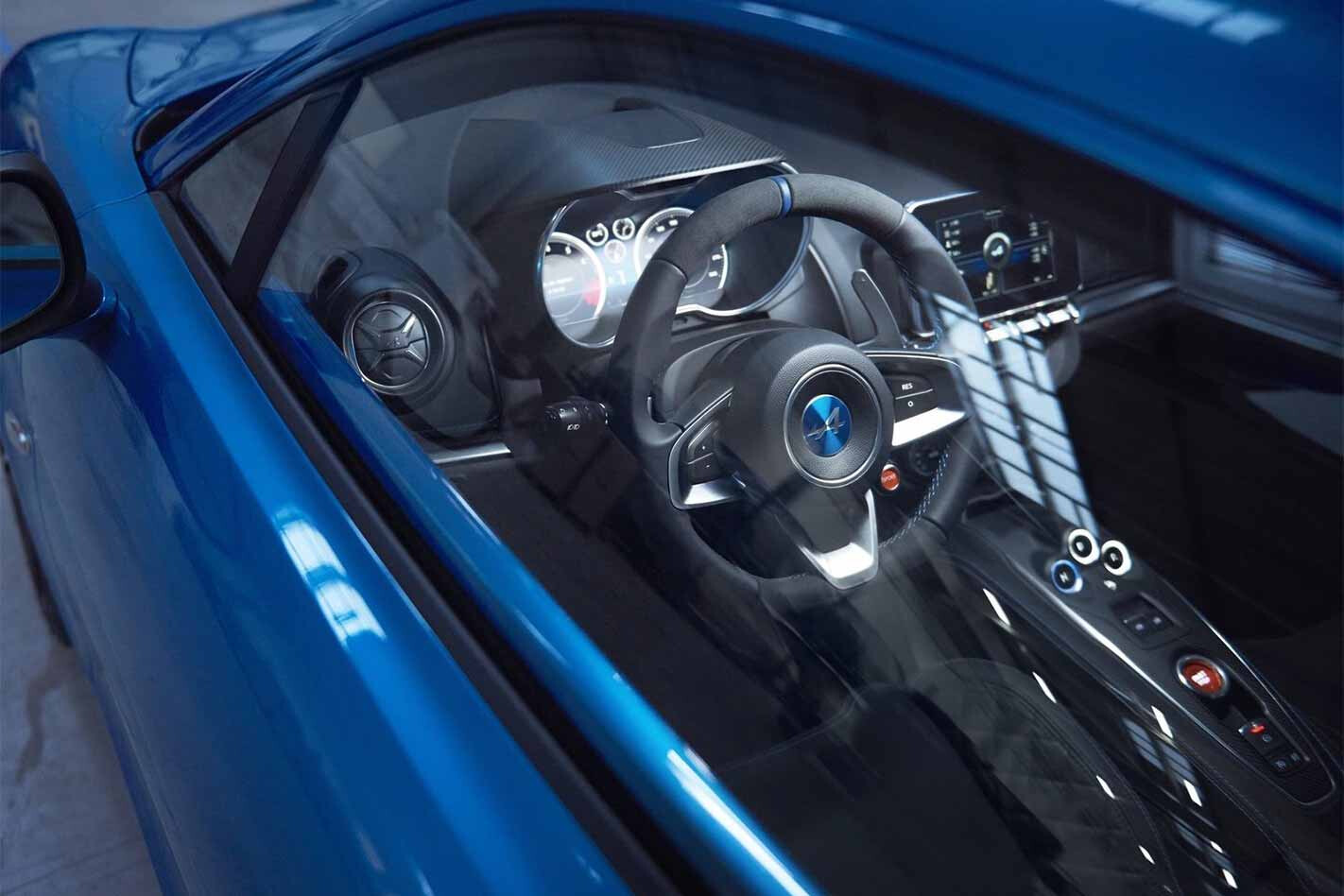 Although the climate controls and touchscreen design are Renault derived, a colour screen ahead of the driver, alloy toggle switchgear, a floating centre console with transmission buttons rather than a lever, quilted leather/Alcantara trim and exposed body coloured metal door trims aim for a ‘premium racecar’ feel.

That pricing is consistent with Renault Australia’s communication of where the Alpine will sit in the market – south of $90K. Although confirmed for right-hand drive production and initially thought to be a natural addition to the local market, Renault Australia now says a decision has not yet been made to bring the coupe here.

“We know that Alpine fans all over the world have been waiting a long time to see the production car and we are excited to say that it’s finally here,” explained Renault Australia corporate communications manager Mel Cross.

“We are studying the opportunity to distribute Alpine in Australia and will communicate at a later stage when our decision is made.”