Holden’s plan to revive its most controversial badge.

THE spirit of Peter Brock will live on in an exclusive limited-edition Commodore that will revive one of Holden’s most famous – and controversial – nameplates.

For the first time since the infamous VK and VL HDT Directors of the 1980s, Holden will use a name that has previously only been associated with its most famous race driver – and the car that led to the split between Brock and the brand that built him.

Holden applied with IP Australia to register the Director name in 2014 and it was accepted in January this year.

Wheels sources have confirmed that, as with original Directors, the Holden Commodore VFII-based model’s emphasis will be on performance with a healthy dose of luxury.

The Director will get the full fruit of the Calais V along with unique interior appointments such as Director embroidery and badging.

Outside, a Director-specific spoiler package will include a subtle but distinctive rear wing, while Holden stylists have created a unique 20-inch alloy wheel design to complement the look.

Holden will also infuse the Director with Holden Commodore SS-V Redline components, including more powerful Brembo brakes in keeping with the emphasis on dynamics. 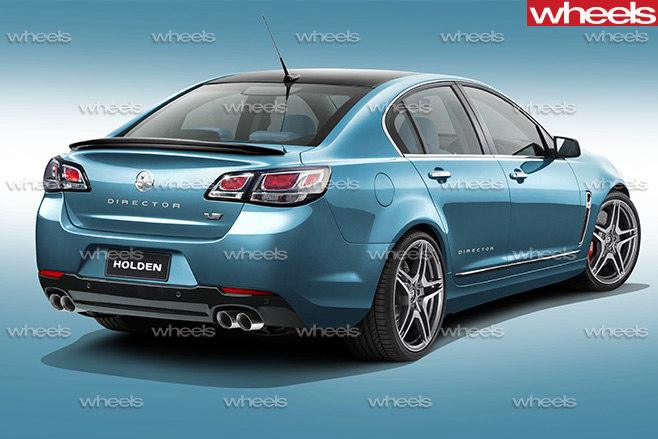 Key to the Director’s dynamic talents will be a version of HSV’s Magnetic Ride Control that adjusts dampers for driver-selectable ride and handling tweaks. It is the first time this technology has been used in a factory Holden and reaffirms the company’s desire to position the Director as Holden’s performance-luxury pinnacle.

Despite the extensive design and dynamic embellishments, Wheels has learned that the Director’s 6.2-litre LS3 V8 will be unchanged from the one that debuted in the VFII Holden Commodore SS-V in mid-2015. That means the limited-edition model will get the full 304kW and 570Nm outputs – but not the extra punch some may have expected from a model with a history of upping the performance ante.

All Directors will come with a six-speed auto transmission, leaving manual fans holding their breath for other upcoming limited-edition Commodores (see breakout below).

According to Holden insiders, just “a few hundred” Directors will be built, each individually numbered and with a certificate of authenticity.

The earliest we’ll see them is late this year.

Expect pricing to sit between $60,000 and $70,000, making the Director one of the most expensive non-HSV Commodores ever.

The Director is one of a number of limited-edition Commodore models Holden will wheel out before the close of local manufacturing in late 2017. Insiders say there are still “a few more tricks up our sleeve” for those wanting the last Aussie V8.

Expect more sports models, including a more overtly styled model to sit above the SS-V Redline. Holden has registered the names Bathurst and LS-X, although we’re told a ‘Commodore Bathurst’ is not on the radar.

Holden has also registered Zora, a name that is expected to be reserved for the mid-engined Corvette-based supercar that could be sold in Australia. Zora Duntov is known as The Father of the Corvette.