LAMBORGHINI has finally confirmed one of its worst-kept secrets, taking to social media to partially reveal the much-spied and discussed Aventador SVJ. Short for Super Veloce Jota, the SVJ badge has been around since the Lamborghini Miura, though its usage has since been very limited.

It’s back in fashion though, and the Raging Bull has set blood racing by teasing the heavily camouflaged SVJ in a brief video shot at Germany’s famed Nürburgring. But, while the 28-second clip confirms the halo car’s existence and name, the caption at the end of the video: “Lamborghini Aventador SVJ meets the legendary Nürburgring Nordschleife”, has splashed fuel on reports that the ‘roided-up Aventador has already claimed the title of ‘fastest road car’ at the fearsome German circuit.

It’s no small boast: to achieve that feat, the Aventador SVJ would have to have bettered the stunning 6:47.25 lap record set by the Porsche 911 GT2 RS last September. However if true, it would return the crown to Sant’Agata Bolognese given the Nordschleife production-car lap record was previously held by the Huracán Performante, with a time of 6:52.01 set in October 2016. 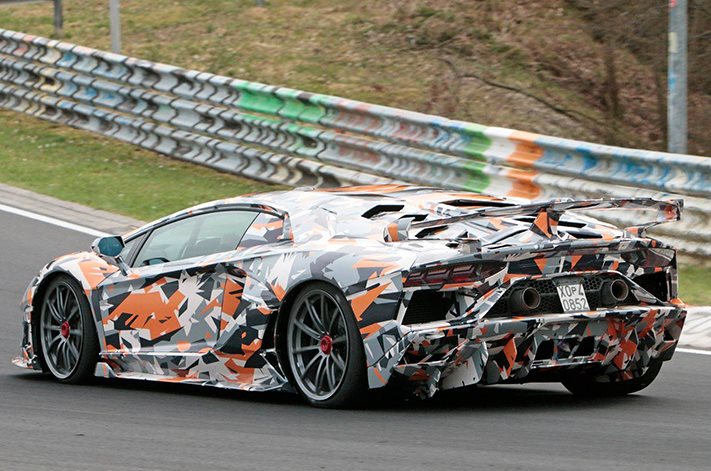 Whether it has reclaimed the record from Porsche will soon be revealed along with the SVJ’s performance stats. If online scuttlebutt is to be believed, those metrics may see the Aventador S’s 544kW/690Nm 6.5-litre V12 swell its muscles to a hefty 600kW.

Not so subject to speculation is the SVJ’s aero package. Clearly visible through the camo are a huge rear wing, deep front splitter and a re-worked rear diffuser to create the additional downforce required to help keep the twelve-pot monster firmly adhered to the Green Hell’s blacktop.

It began with the FIA ‘Appendix J’ regulations for racecars, which came into play in 1965, leading Lamborghini to build a Miura called the ‘Jota’ – the Spanish pronunciation for the letter J – in 1970 to fit within these rules.

Since then, only the Diablo, and now Aventador, have featured a very limited edition Jota.