TESLA has finally revealed its most affordable model, the Model 3 – the car the company describes as “the final step in the master plan” to create a family of electric vehicles.

After years of build-up and months of hype – which culminated in more than 115,000 fanatical would-be customers slapping down $1500 deposits to be among the first to take delivery – the Model 3 was unveiled in California by charismatic Tesla chief Elon Musk, who was given the now traditional rock star welcome with cheers throughout his presentation.

Priced from $US35,000 (about $A60,000 once local taxes are included), the Model 3 will arrive in Australia early in 2018 – at which point rival carmakers are expected to be providing more serious competition to the fledgling brand that has helped kick-start electric motoring. 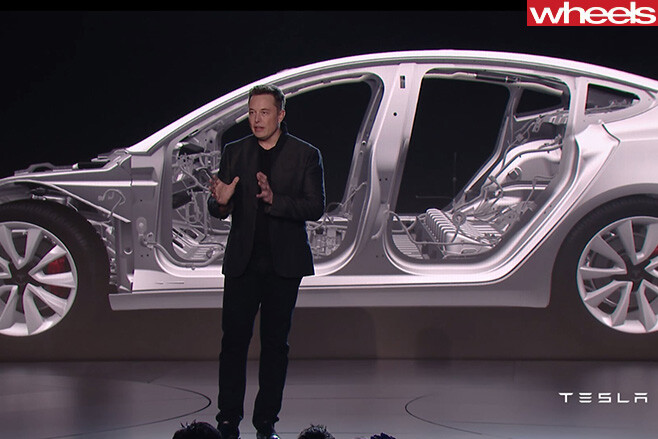 Musk said the Model 3 was a result of the more expensive models in the line-up, including the Tesla Model S and soon-to-arrive Tesla Model X, Tesla’s first SUV.

“The revenue from the Model S and the Model X is what’s needed to develop the Model 3,” he said. “The S and the X are what paid for that Model 3 development.”

The Mercedes-Benz C-Class-sized electric car looks like a smaller version of Tesla’s first ground-up model, the Model S, albeit with a cleaner nose without a traditional grille.

But the tail has taken on a hatch-like hump designed to liberate more rear headroom. Tesla claims the Model 3 can comfortably fit five adults, partially because the rear seats have been moved forward, with the legs of those sitting up front encroaching on the space usually occupied by an engine in a car with an internal combustion engine.

As with others in the Tesla range, though, it’s more about what’s beneath the skin that makes the Model 3 different.

The Model 3 floorpan is a mass of lithium-ion batteries powering an electric motor.

All Model 3s will sprint to 100km/h in six seconds or less and have an electric range of at least 346km. “At Tesla we don’t make slow car,” said Musk, prompting more cheers from the enthusiastic crowd. “And there will be versions of the Model 3 that go faster.”

The interior continues the futuristic theme of other Teslas, right down to the large colour control screen that operates like a tablet computer.

Perhaps predictably, Musk claims the Model 3 will be the best car in its class.

“Even if you buy no options at all this will still be an amazing car,” he said.

Safety, too, is claimed to be class leading for what he calls “an incredibly safe car”.

“It will be five-star in every category,” said Musk. The Model 3 will also be able to access the Tesla Supercharger network, which in Australia includes seven locations between Melbourne and Port Macquarie.

At the launch of the Model 3, Tesla also committed to doubling its supercharger network by the end of 2017.