If Porsche’s online 911 configurator let you not only choose paint and trim options but pick the juiciest mechanical parts from the entire range, chances are you’d end up with something like the new 911 R.

A last hurrah for the 991-series before the production lines dedicate themselves completely to the new 991.2 models, the 911 R is a lightweight, limited-edition special that stuffs the best bits from Porsche’s motorsport-derived GT cars into a more subtle, retro-inspired package.

Describing the car as “authentic, honest and transparent”, Porsche’s motorsport boss Andreas Preuninger explains the 911 R exists “because there are clients who want to experience driving pleasure in its purest form.” The name is a clue as to its focus, for the 911 R is one of Porsche’s rarest and most revered models – just 20 of the powered-up, stripped-back road-racers were built in 1967 for events such as the Targa Florio. 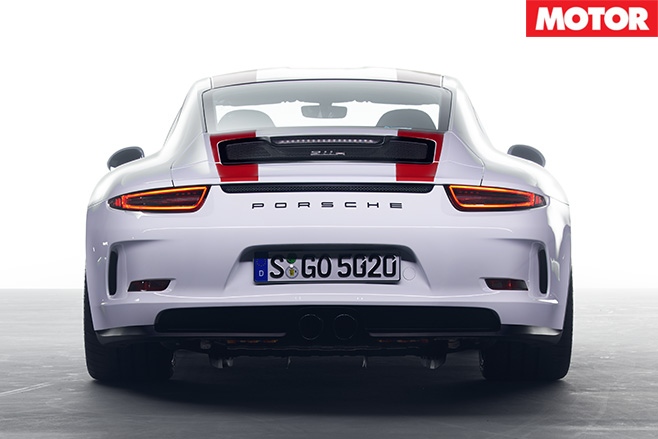 The modern day 911 R is built in a similar vein. At 1370kg it is the lightest current 911 by quite a margin, undercutting even the hardcore GT3 RS by 50kg. The bodyshell is regular GT3, albeit with the huge rear wing replaced by the active pop-up spoiler from the Carrera S, while the RS donates its lightweight panels, including a carbon bonnet and front guards, magnesium roof and plastic rear windows.

There are no rear seats, an extra 4.5kg of sound deadening has been turfed compared to even the track-focused GT3 RS, air-con and a radio move to the no-cost options list and a titanium exhaust and carbon-ceramic rotors (410mm front; 390mm rear) are standard.

However, despite the bare-bones standard specification, this is not intended as some stripped-out track-day special. The seats are 918-style carbon buckets, but they are trimmed in a mixture of leather – a choice of brown or black – and pepita cloth upholstery; the green instrument faces are bespoke to the R and carbon fibre is scattered around the interior, including on the dash, centre console and gear lever. 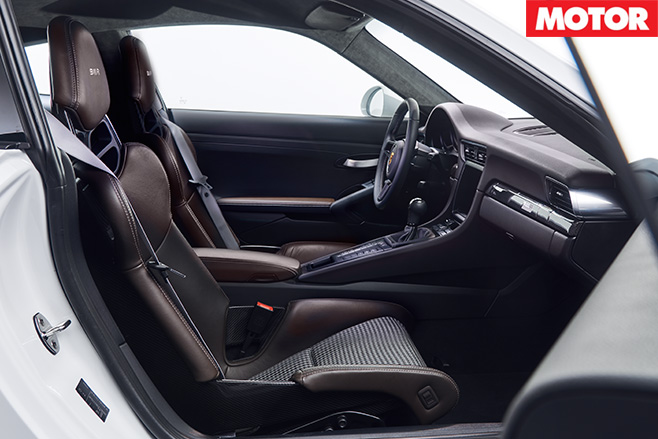 Yes, gear lever. Possibly the most exciting feature of the 911 R is the new ZF-developed six-speed manual gearbox. It marks a change in philosophy for Porsche’s GT department, with the current GT3 and GT3 RS only offered in PDK guise.

A single-mass flywheel saves a further five kilograms and re-introduces some of the 911’s signature idle rattle that went missing with the move to PDK.

Powering the 911 R is the 4.0-litre flat-six from the GT3 RS producing 368kW at 8250rpm and 460Nm at 6250rpm. The manual gearbox lifts the claimed 0-100km/h to 3.8sec – which seems extremely conservative – but the sleeker body gives it a 323km/h top speed, or 201mph in the old money. With the wings deleted, a new rear diffuser keeps the rear end sucked to the ground while the GT3 front splitter eradicates any lift. 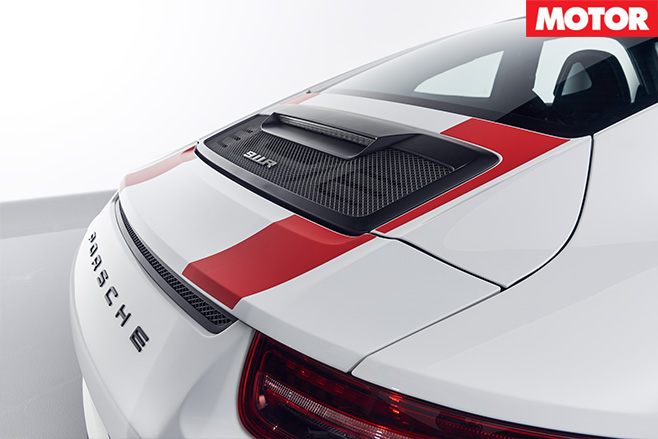 Power is sent through a mechanically-locking differential to 305/30 ZR20 rear Michelin Pilot Sport Cup 2 tyres, with fronts measuring 245/35 ZR20. There was speculation the 911 R would offer narrower rubber, but while this isn’t the case with GT3 RS power being sent through regular GT3 tyres, the power/grip balance has swung decisively in favour of the former.

Spring rates are the same as the GT3, however the PASM adaptive dampers have been recalibrated for road use; likewise, the GT3 donates its rear-wheel steering system, however it has been tweaked to offer even more agility, the 911 R moving closer to the Cayman GT4 in feel according to boss Preuninger. 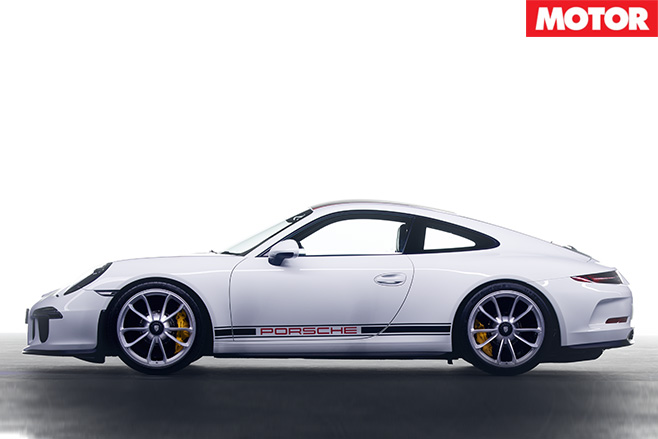 The 911 R is somewhat of an anachronism. Manufacturers keep telling us that manuals are yesterday’s news and that connectivity, not connectedness, are what consumers want, yet Porsche has created its latest limited-edition in direct response to customer demand.

Thankfully, there are still enough enthusiasts out there with the resources and influence to keep the purist sports car dream alive – we can’t wait to drive it.