At 8800rpm in fifth gear, an indicated 255km/h, the smallest things take on new importance.

Is that van, far off in the distance, planning to pull out in front of me? What about those taillights that just disappeared out of sight, did they just flash red? When was the last time this stretch of autobahn was resurfaced?

Fast as a whip, the PDK dual-clutch ’box fires home sixth and the accelerative onslaught continues with next to no interruption. Sixth is all done at 298km/h and the process repeats itself, but the speed is accruing slower now, the digital readout ticking over in single km/h increments. The number ‘303’ flashes up briefly before we must rein in proceedings, 7km/h shy of the new 911 GT3 RS’s maximum velocity. 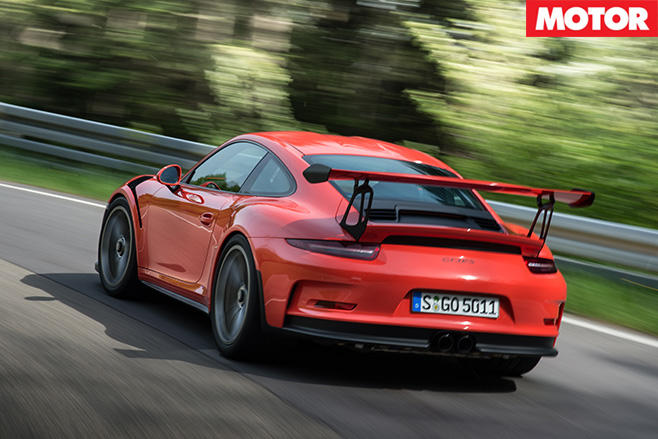 A top speed of 310km/h is nothing to sneeze at, but strangely, the ‘regular’ GT3 – the one that weighs more, has 18kW less and is far cheaper – manages 315km/h. Is the new RS a dud? Boss of Porsche’s GT division, the lanky and enthusiastic Andreas Preuninger, explains, “V-max is not what this car is about; it was engineered and set up for the race track where 300-plus-km/h straights are a rarity. What matters on the circuit is mechanical grip and downforce.”

These are two things the new 991-series GT3 RS has in spades, best illustrated by a Nürburgring lap time of 7min20sec, just 23 seconds shy of the 918 Spyder despite that car’s advantages of all-wheel drive and almost 300kW extra (not to mention almost three times the torque). Still, on paper it’s the flat-six in the back that most obviously stands out as the difference between the standard GT3 and this ‘Rennsport’ version.

Increasing the stroke by four millimetres lifts capacity from 3799cc to 3996cc with corresponding increases of 18kW and 20Nm, though the redline drops to 8800rpm from the GT3’s 9000rpm. The net result is 368kW/460Nm, though Preuninger claims that 380kW, or more, is closer to the real figure. 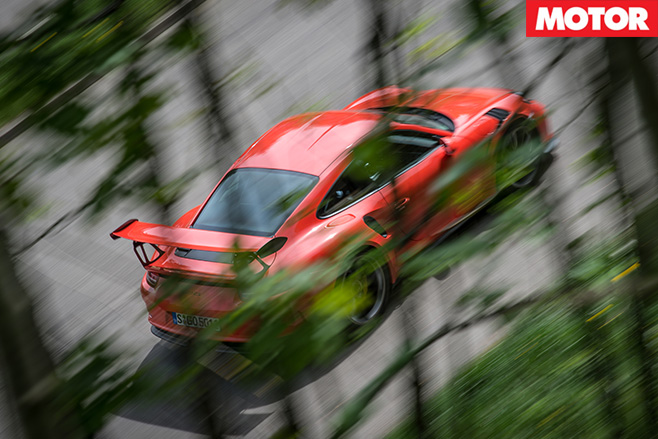 The acceleration figures tell the story: 0-100km/h in 3.3sec, 0-200km/h in 10.9sec, 80-120km/h in two seconds. What they don’t convey is the emotion attached to extending this very special engine. Though the redline is lower, the RS sounds meaner, rawer, more mechanical.

Even on part-throttle, the naturally aspirated flat-six breathes in loud through its side intakes and when you lift off completely, there is all manner of chafing, grinding and scraping noises emanating from behind the rear bulkhead. In most cars it would be enough to have the customer returning to the dealer for a comprehensive overhaul, but it’s all “part of the plan” according to Preuninger.

“This is a truly uncompromising car – it embodies the exact opposite of autonomous driving,” he says. “What we did here is push the boundaries. This involved removing a lot of weight, reducing tolerances, sometimes opting for extreme solutions. At such an ambitious level, trade-offs are inevitable.” 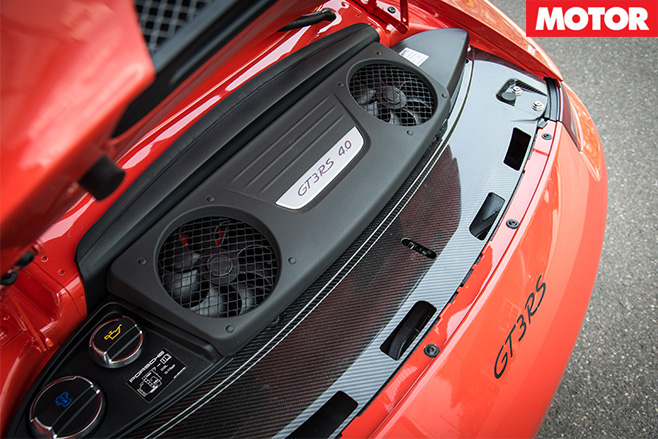 Indeed, the differences between the two engines are far more than a bit of extra capacity. A different crankshaft, made from material used for the 919 LMP1 prototype – “Star Trek steel” according to Preuninger – as well as different conrods, pistons, camshafts, cam springs and oil system. The use of the wider Turbo bodyshell and those side air intakes also allowed the development of a different intake system.

Whereas a regular GT3 has the air intake at the back, switching the intakes (both sides are functional) to the side means the air ingested by the engine is less ‘disturbed’ from having travelled over the car. The more straightforward path increases the ram-air effect, liberating even more power.

The extra girth of the Turbo bodyshell proved necessary to provide clearance for the enormous 265/35 ZR20 (front) and 325/30 ZR21 (rear) Michelin Pilot Sport Cup 2 tyres specially developed for the 918 Spyder. And they’ll want to be special, as the amount of modification and expense that was required to fit them is mind-boggling. 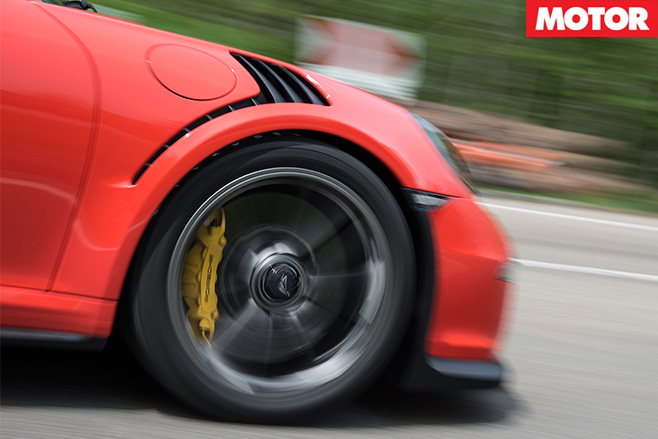 Initially, all the CAD data showed that the tyres just wouldn’t fit in a 911 bodyshell, fouling on both the inside and outside of the guards. Altering the wheel arches of the body in white allowed just enough room for the bigger wheels and tyres – “the packaging is so tight you could not get a leaf in there” – but created another, much larger problem.

The GT3 RS was now so wide that it didn’t fit down the production line, necessitating modifications to ensure that half-built cars didn’t get stuck and bring the Zuffenhausen plant grinding to a halt. No doubt Porsche’s accounting department has a number of Andreas Preuninger-shaped voodoo dolls stuck to the office walls.

The massive rolling stock verges on making the car look comically over-wheeled, like something out of a Hot Wheels catalogue. It also lifts the car, the ride height being 8-9mm higher than the GT3, and gives it greater ‘pitch’, which increases front downforce. And the black art of aerodynamics is where Porsche Motorsport’s latest creation distances itself from any other previous 911. 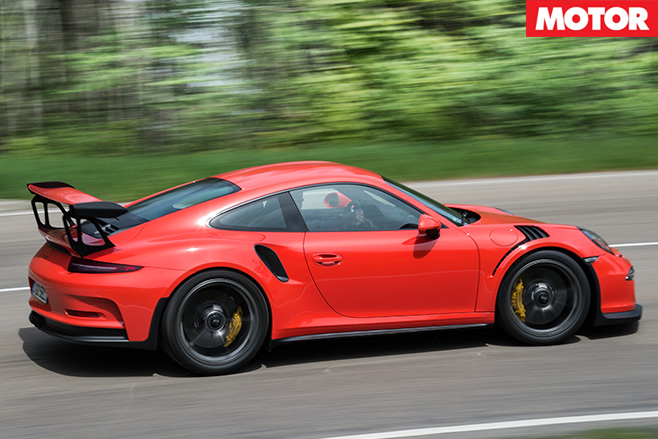 As we topped 300km/h during our earlier autobahn run, the air was applying 350kg of downforce on the car, more than double that of the 997 GT3 RS 4.0. No wonder it struggles to accelerate beyond 300km/h. The enormous rear wing carries the lion’s share of the load, but balancing that at the front was a much harder task.

Increasing the pitch of the car helped, as did installing the ground-scraping, driveway-fearing front splitter, but the biggest gains were made thanks to the radical vents in the front guards. Their aesthetic value is debatable, but at Porsche’s GT division, form must always follow function and their contribution to doubling front downforce meant they had to stay. What’s even more impressive than the extra downforce, though, is that it’s been achieved without increasing drag, the RS generating the same 110kg of drag as the regular GT3.

But enough tech talk, what is this engineering wet dream like to drive? Initially, quite difficult, as tyre management is an unexpected issue. To generate sufficient front-end grip to guarantee prompt turn in and balanced handling, it’s imperative to evenly warm up all four tyres. Overly eager to start play, I fail to do so. With the electronic nannies firmly off, the resultant wheel slip heats the rears nicely, but the fronts remain cold and the result is early and persistent understeer. 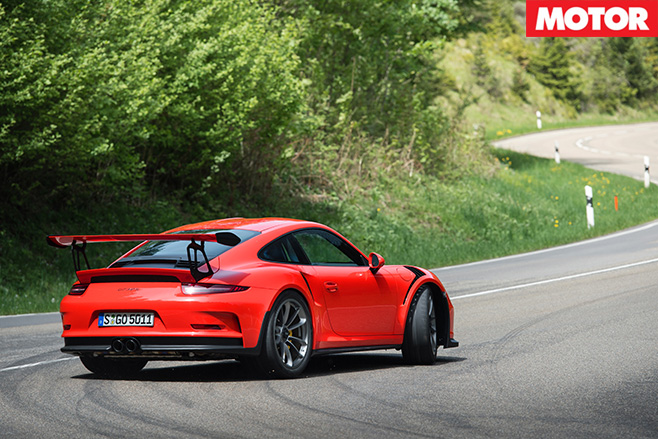 A more patient, measured approach yields better results. These extreme tyres need extreme care on wet or cold surfaces lest you find yourself doing some impromptu gardening, but on warm, dry roads breakaway is surprisingly creamy and manageable for a 368kW sports car with an impossible weight distribution.

Thanks to the wider bodyshell, extra body reinforcement, roll cage and larger wheels and tyres, weight drops only 10kg but it’s both better distributed and spread over wider contact patches, so while differences on the road may be slight, a dedicated driver will relish the extra performance.

With the tyres up to temperature, grip levels are that of chewed gum on woollen jumper, yet all it takes to get the rear end swinging is a wrench of the steering wheel and a bootful of power. The car can even be ‘clutch-kicked’ by pulling both gearshift paddles towards you, which engages neutral and allows you to dial up plenty of revs before releasing the paddles to get the rear wheels spinning. 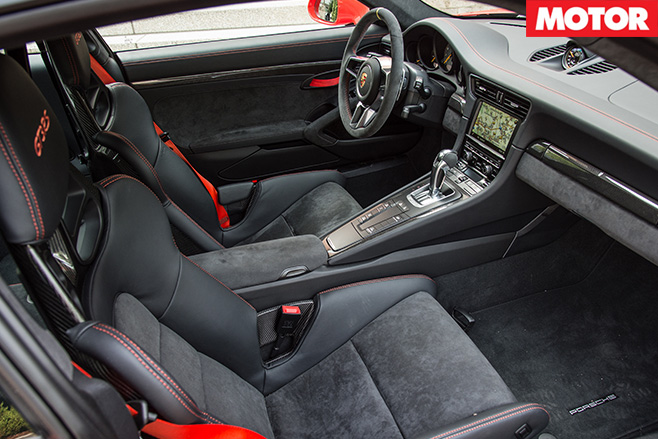 The seven-speed dual-clutch gearbox is more or less flawless in its operation, though hyperactively eager in Sport mode. The ratios are identical to GT3, but a shorter final drive (4.19 vs 3.97) means it pulls through the rev range with that little extra ferocity.

A manual was rumoured to be under consideration for later in the life cycle, but Preuninger pours cold water on that suggestion. “This model is as close as you can get to a race car without losing the roadworthiness certification. A car like this deserves not only a very special engine and the best chassis but also the fastest transmission.”

So, is the RS really worth a 30 per cent premium over the already brilliant GT3? It’s the question at the forefront of my mind as the fuel light comes on for the second time today, signalling it’s time to return to Stuttgart. From an investor’s point of view it’s a no-brainer. With demand far outstripping supply, cars are already changing hands for almost twice list price, and the RS will undoubtedly be the car to have in terms of future value. 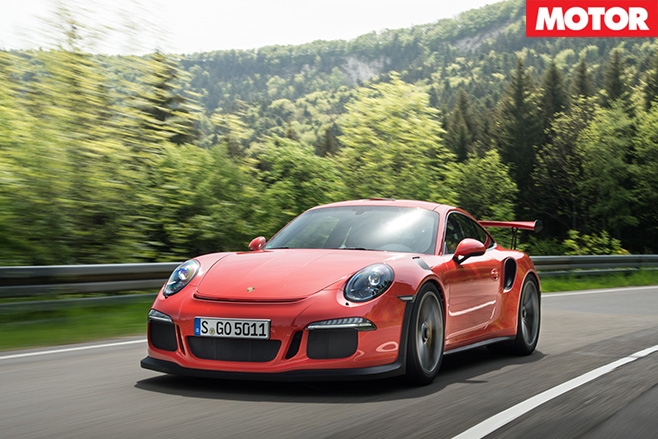 From an enthusiast’s perspective – the more important perspective as far as we’re concerned – it’s a close-run thing. It’s undoubtedly the rowdiest and raciest of the 911 breed, stealing the crown from the GT3 RS 4.0, but although the new RS is a more complete and capable car than the last of the 997s, the jury is out on whether it’s actually any more involving.

Splitting the GT3 and its hardcore twin is difficult. On the right road (or, more likely, racetrack) on the right day, the RS premium will feel like money well spent, but whether that extra thrill justifies the greater compromise of a luggage area full of roll cage and unyielding suspension will likely depend on how many other cars are already in the garage. The differences between GT3 and RS might be marginal, but at this level of excellence, the smallest things take on new importance.

Perhaps a case can be made for yet another 911 derivative, a car every bit as emotional as the GT3 RS but both more practical and more affordable? Imagination paints a spoilerless lightweight special based on next year’s facelifted 911, powered by 335kW atmo engine mated to a close-ratio manual gearbox and priced between GTS and GT3. How about naming it 911 Clubsport or even 911R? 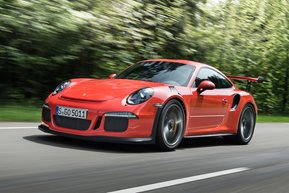