The slide seems unrecoverable. It’s one of those massively overcommitted drifts where the car has gone beyond perpendicular and you start scanning the side windows to see what you’re going to hit.

Of course, destroying a Porsche Taycan on an international press event would likely be a career-ender, and at that precise moment I have an empathy fail and feel a pang of relief it isn’t me flapping at the wheel and doing the subsequent explaining. I’m in the jump seat for this one.

The electric motors shriek and whinny, the Pirellis scrabble desperately at the wet surface of the Grevenbroich test facility and then it’s all gathered up, and rocketing towards the next apex. Yes, the Taycan is an electric vehicle, but above all else it’s unapologetically, joyously a Porsche.

It’s not Porsche’s first EV. The company developed an all-wheel drive EV – the System Lohner-Porsche – in 1898, but it’s fair to say that the prospect of Zuffenhausen belatedly getting back into the game has kept us intrigued. Just over a year ago, Porsche bought a 10 percent stake in Rimac Automobili, the Croatian company behind the Concept_One and C_Two electric hypercars. It supplies Koenigsegg, Hyundai, Renault and Jaguar, and also developed the battery system for the Aston Martin Valkyrie. Although the collaboration came too late for the Taycan’s development, it’s expected that Rimac battery tech will soon be found beneath future Porsche floors. So these are exciting times. 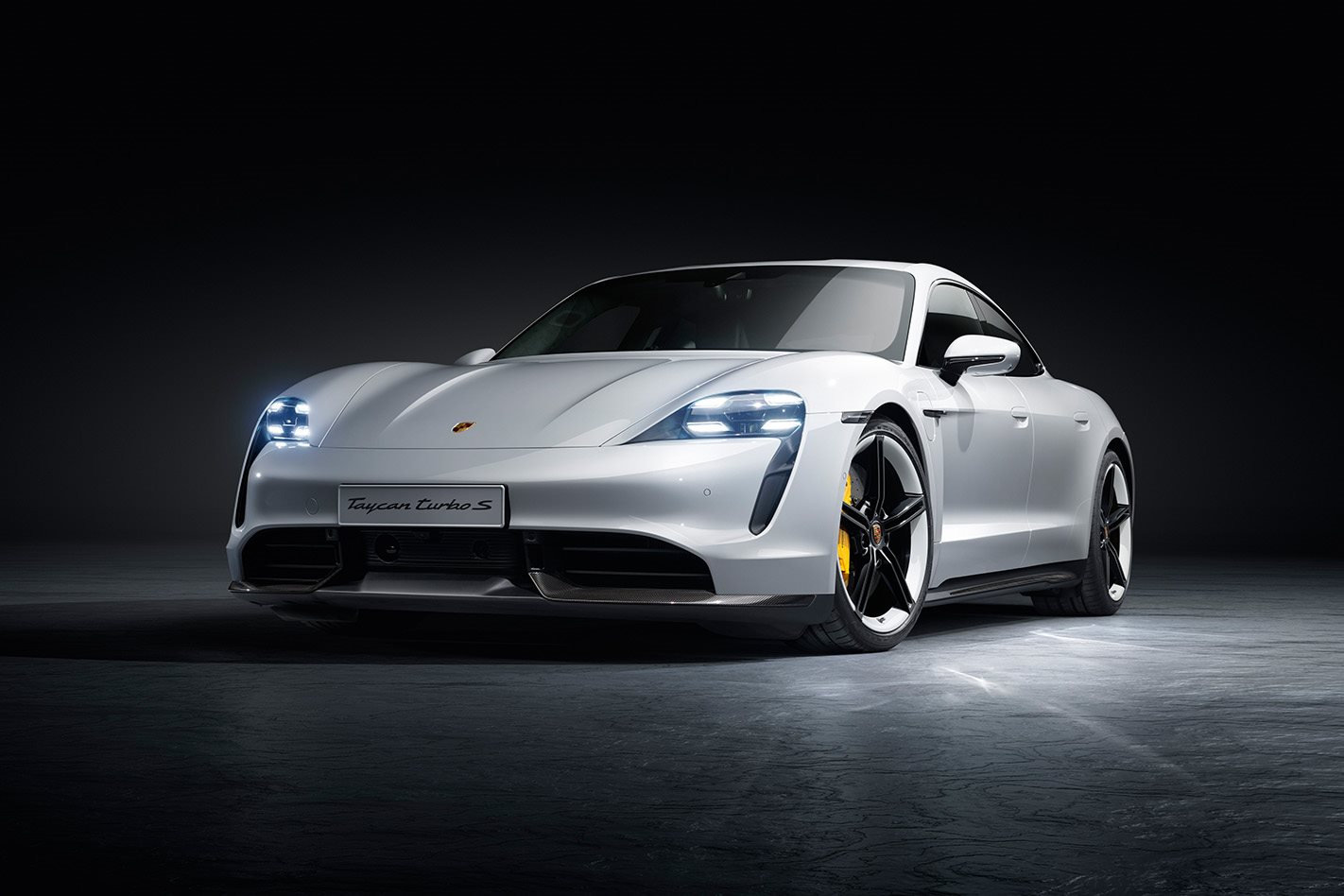 Were you a cynic, a Teslarati or both, you might well paint the Taycan as Porsche merely doing something that Elon Musk largely covered with the Model S in 2012, or that minus an internal-combustion engine, the Taycan is somehow commoditised; a generic skateboard draped in Zuffenhausen’s dress-up. Nothing could be further from the truth.

Australians can initially expect the Taycan in three distinct flavours. Come October 2020, the Taycan will slot into Porsche’s range somewhere just below the Panamera, but if you want one of the early cars, you’re too late. Porsche has already sold its entire first-year build run of 30,000 Taycans, and given that it sold 35,573 911s last year, the company is bullish that Taycan demand could outstrip that of the iconic sports car it’s built alongside at Zuffenhausen.

Expect the flagship Turbo S to be priced around $350K before on-roads here in Australia, with the Turbo just under $300,000 and the 4S pitching in at just under $200,000. Typical option spend will be around 15 percent on top of those numbers. A rear-drive entry-level car will debut in 2021, which could bring access to the Taycan range down to Cayman money. Also due in 2021 is the Cross Turismo shooting brake body.

The Taycan 4S, the Taycan Turbo and the flagship Turbo S all feature dual electric motors that drive all four wheels and a two-speed transmission at the back. The range-topping Turbo S was on hand for us to sample at the workshop in Grevenbroich. This features a crushing 560kW and 1050Nm system output, a range of 420km and a 93kWh battery (84kWh net) composed of 384 LG cells with a pulse-controlled inverter on both axles to convert the battery pack’s DC charge to the AC required by the permanently excited synchronous motors. 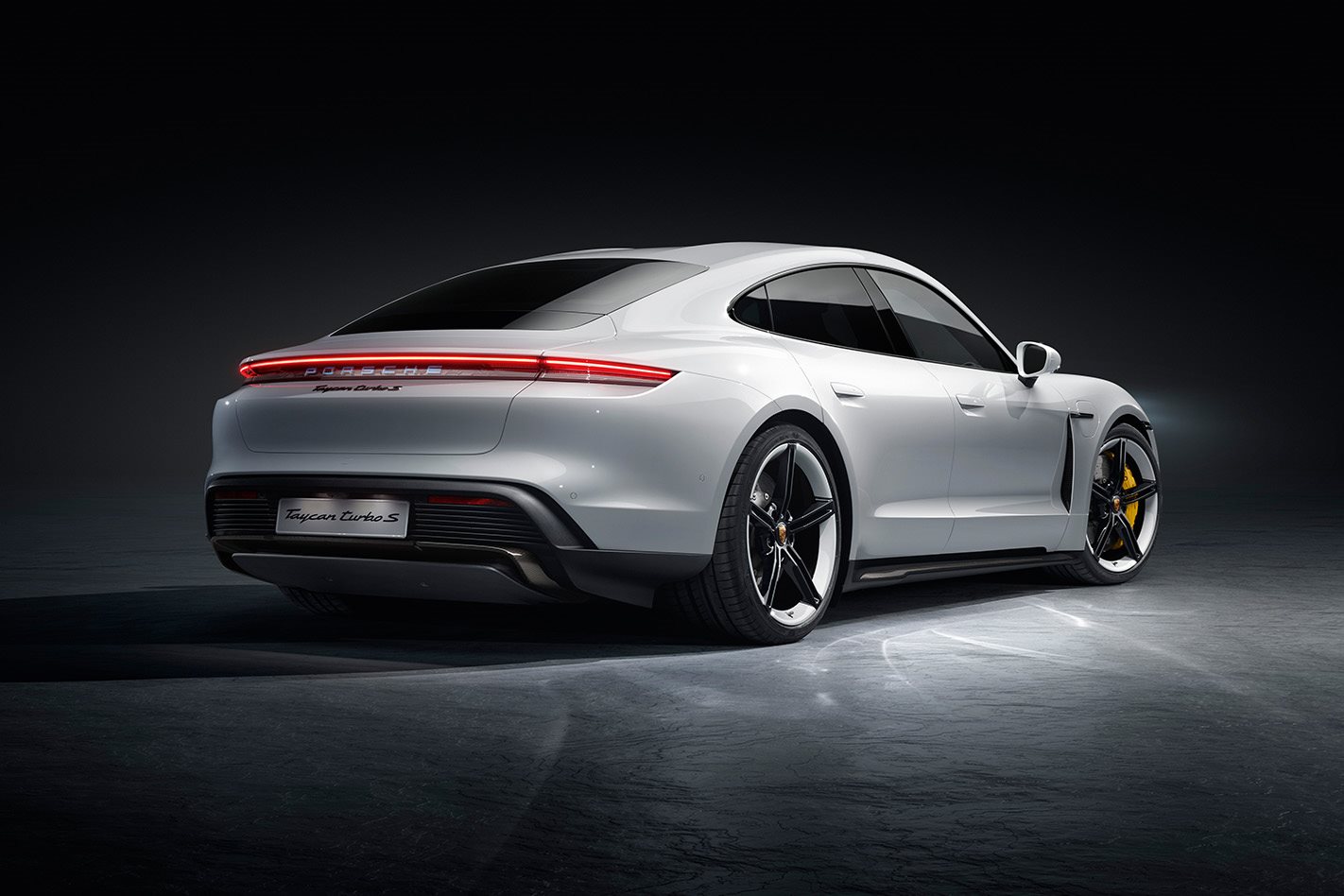 It’s monstrously rapid. Porsche’s 2.8-second 0-100km/h claim and 9.8-second sprint to 200km/h felt, if anything conservative. The 505kW/850Nm Turbo won’t be much slower at 3.2sec/10.6sec and delivers up to 453km of range. The key difference between the two models is that the Turbo S gets a second pulse inverter on its front axle and so can handle more torque. The pulse inverter is also employed as a traction control device, being able to cut and reapply power 10 times faster than Bosch’s traditional all-wheel-drive chipsets.

Unlike most EVs (apart from the Rimac C_Two with which it shares some technology), the Taycan has a two-speed transmission on the rear axle. The motor will spin to 16,000rpm, but the gearbox gives it added flexibility. In Sport and Sport Plus modes when, incidentally, launch control is offered, the transmission logic prioritises first gear for aggressive acceleration capability allied to an overboost function. In Range and Normal modes, the taller second gear is prioritised for efficiency. Weighing just 70kg, the transmission is subtle, but under full acceleration it’s possible to hear, if not feel, it snick up a gear.

Switch the Taycan into Sport or Sport Plus modes and the usual electric whine hardens into a more strident, but still notably electrical sound. “We wanted to modulate the natural sound of the e-motor,” explains Bernd Propfe of the (optional) Porsche Electric Sport Sound. “We will not make a V8 sound, and no cheap ‘ringtones’ will be available. Customers will not be able to change this.”

“It’ll lap the Nürburgring in significantly less than eight minutes,” said Dr Ingo Albers, the director of chassis engineering on the Taycan project. “It did an eight-minute lap without any braking,” he adds later, almost as an afterthought. All of the Taycan’s energy recuperation (up to an industry-best 265kW versus the 50-100kW of most competitors) comes via the brake pedal, and Albers claims that 90 percent of all braking events when you request the pedal are handled by energy recuperation, rather than troubling the brake discs. It’s but one mind-boggling aspect of the Taycan’s dynamics.

Helped by its active roll stabilisation system, Albers claims that in the Taycan, “bodyroll is reduced to zero”, with the only detectable roll coming via tyre deformation. Reducing roll oversteer tendencies is clearly desirable in a vehicle that weighs 2295kg. 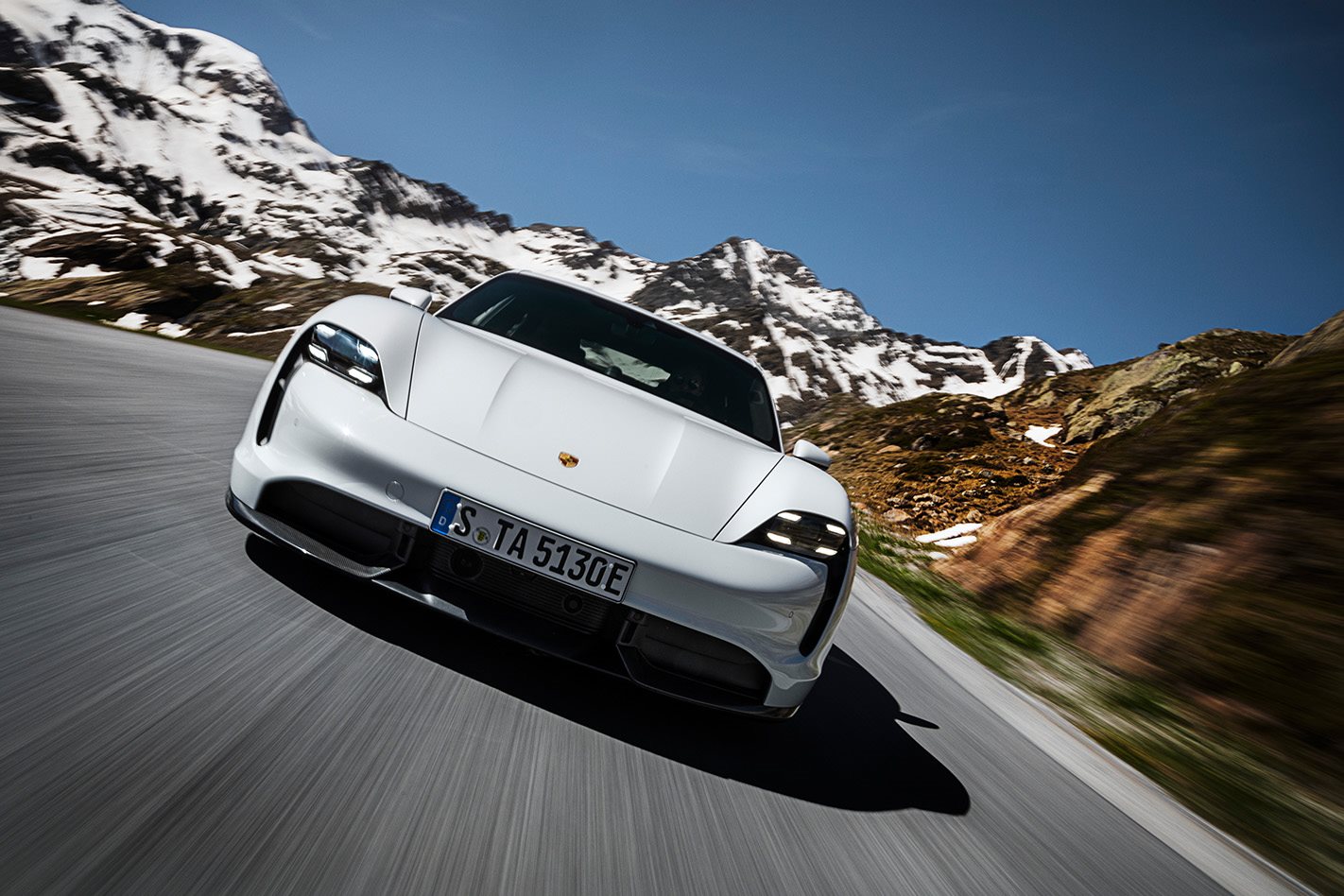 “We have PSM [stability control] with a Sport setting that offers a safety net, like a virtual rubber band, or there’s PSM off. And off means off with us,” grins Albers. It’s phenomenally adjustable, which is hardly surprising given the dynamic options at the car’s disposal. Drive can be shuffled back and forth and from side to side, there’s torque vectoring by braking, and a lock-up differential.

I’ll freely admit that my first glimpse of a Taycan provoked mild disappointment. Gone are the otherworldly proportioning and suicide doors of the original Mission E concept, replaced by a more practical – and taller – superstructure. Sit a Taycan next to a Panamera and the bonnet is lower, but the windscreen header rail much the same height, gradually tapering back into a characxteristic Porsche fly line, making rear headroom that bit tighter. “It reflects the genes of the Mission E,” claims Dr Bernd Propfe, the platform director. “We’ve done our utmost to bring this into production.”

It’s almost sensible. The obligatory pair of golf bags will fit into the 400-litre rear luggage bay, leaving the 82-litre frunk for your charging cables or a soft bag. The cabin is a marked departure from existing Porsche designs. The dash features no cowled binnacle, Porsche instead using a huge 16.9-inch freestanding curved glass display, treated with anti-glare coatings. A set of eared tabs sits at each end of this screen, with the lights on the left and functions for ESC, lifter and others on the right. There are also driver-assignable hot keys. Sitting on the upper dash, rather incongruously, is the knurled gearshifter tab, much as we’ve seen in the 992 version of the 911, while the Sport Chrono option features a neat little manettino mode dial on the steering wheel arm and the analogue clock front dead centre of the dash roll top.

The most striking aspect of the interior is the 10.9-inch optional screen that sits ahead of the passenger. This co-driver screen can be used to marshal sat-nav and infotainment, switching to a blank screen when the passenger seat is empty. In between these two displays is another 10.9-inch centre display, while the centre console houses an 8.4-inch haptic display. Wireless Apple CarPlay and over-the-air updates are supported, and there’s a now almost obligatory voice-activated assistant, summoned by saying “Hey Porsche”. 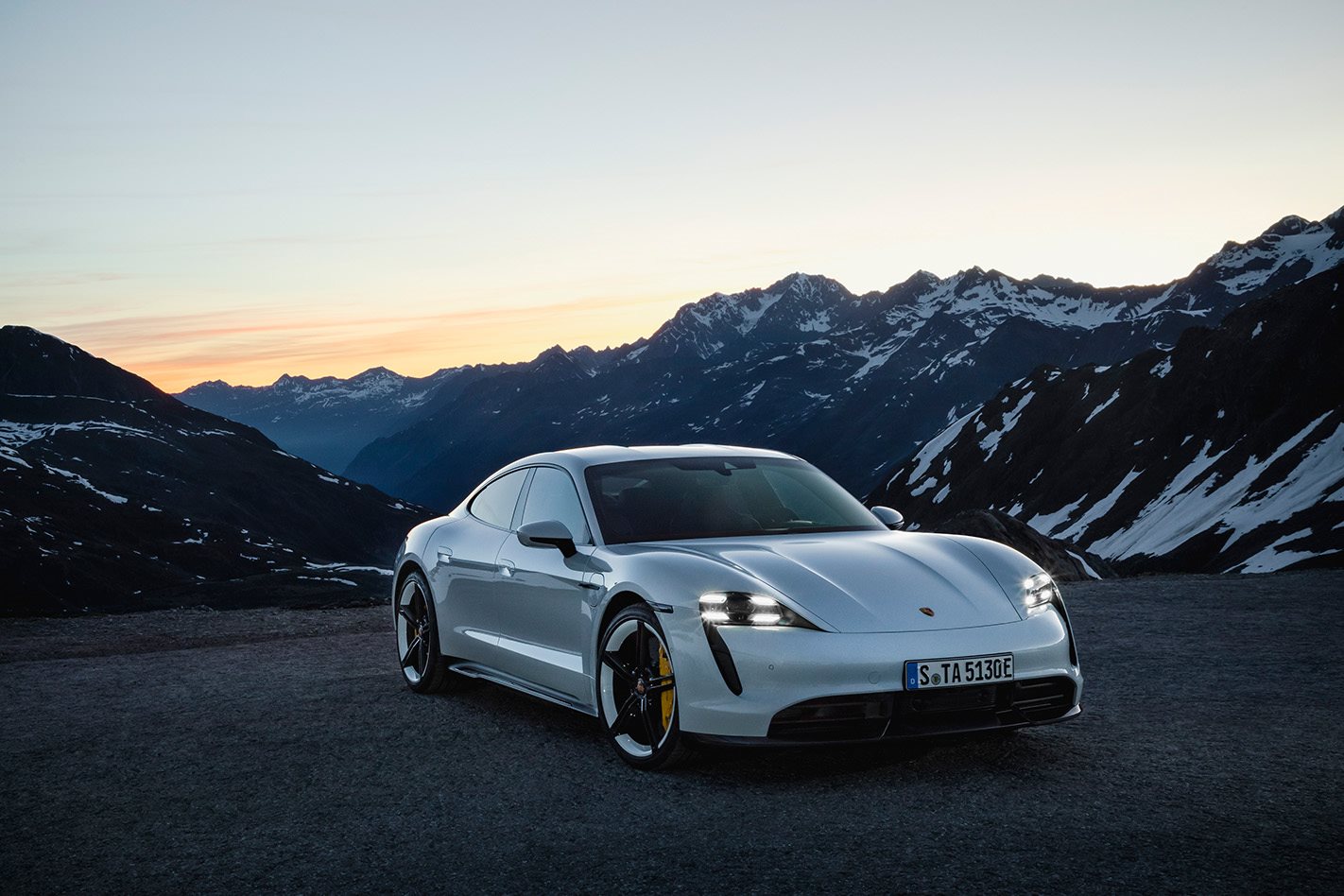 Much has been made of the Taycan’s 800V electrical architecture, Porsche playing heavily on the fact that a five-minute charge will secure you 100km, sucking on the car’s 270kW charging power. The problem, as it stands, is that there isn’t a network of 800V chargers for the Taycan to exploit this. The company readily admits that most will be charged overnight at the owner’s home, using the Porsche Mobile Charger Connect on a 240v AC plug at 11kW, which will take six to eight hours. In conjunction with the Porsche Home Energy Manager, it supports smart charging applications and provides overload protection for your domestic connection.

On a typical 400V public charger, the Taycan will charge at 150kW. Porsche is planning to install the 800V ‘Turbochargers’ at its main dealerships, and these will charge a warm battery from 5 to 80 percent in 22.5 minutes. JET Charge has also announced that it will roll out 800V chargers across Australia in due course.

For the time being at least, the Taycan will slot onto the progressive end of Porsche’s three-pillar strategy of internal combustion, plug-in hybrid and full EV. “How do we bring Porsche into the next generation? How can we bring the fascination of sports cars into the future?” asks Dr Robert Meier, Director Complete Vehicle, Porsche Taycan, yet the future strategy is unambiguous. “Make no mistake, the combustion engine will be superseded by the electric powertrain,” he says.

The Taycan is Porsche’s future. It may seem like sacrilege, but the rest is just detail. 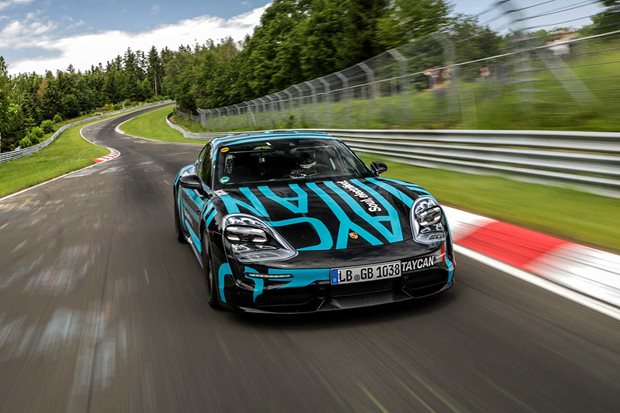